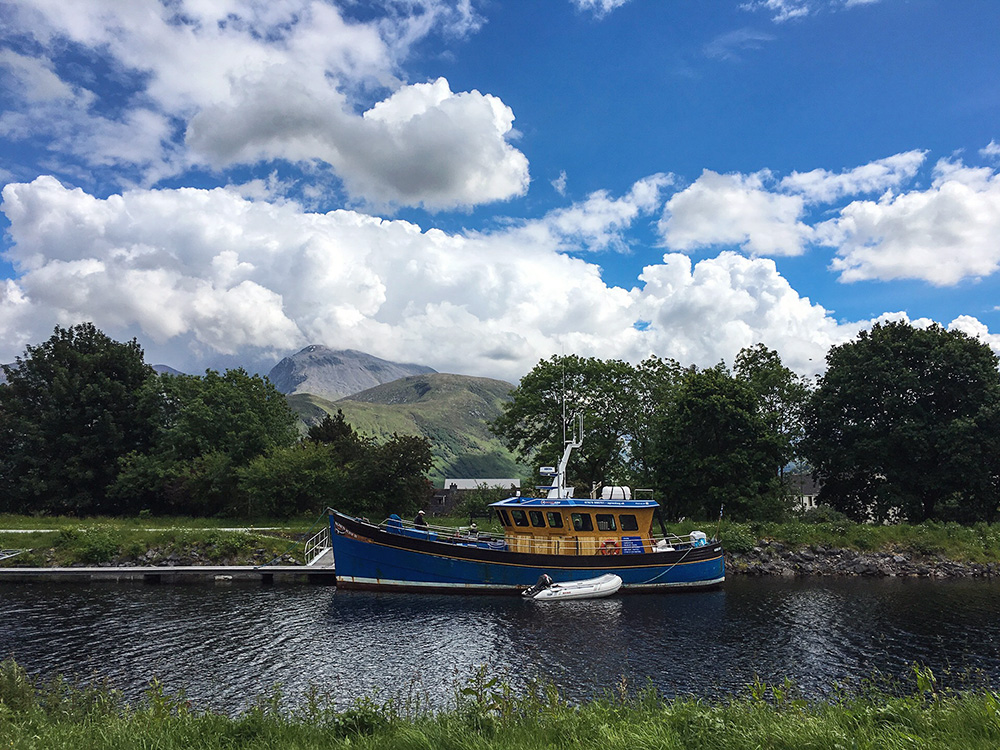 Published on September 5, 2019 by Elizabeth Atia

Last June I joined Shetland skipper Ewan Anderson of Agnes Kay Charters and a motley crew of other passengers for a West Coast Scotland tour.

My best friend and I, after having walked Hadrian’s Wall together a few years previous (127 miles and we’re still friends!), decided we needed another random adventure to spice up our lives. We boarded the Agnes Kay II in Oban, after a pleasant, leisurely journey from Shetland. 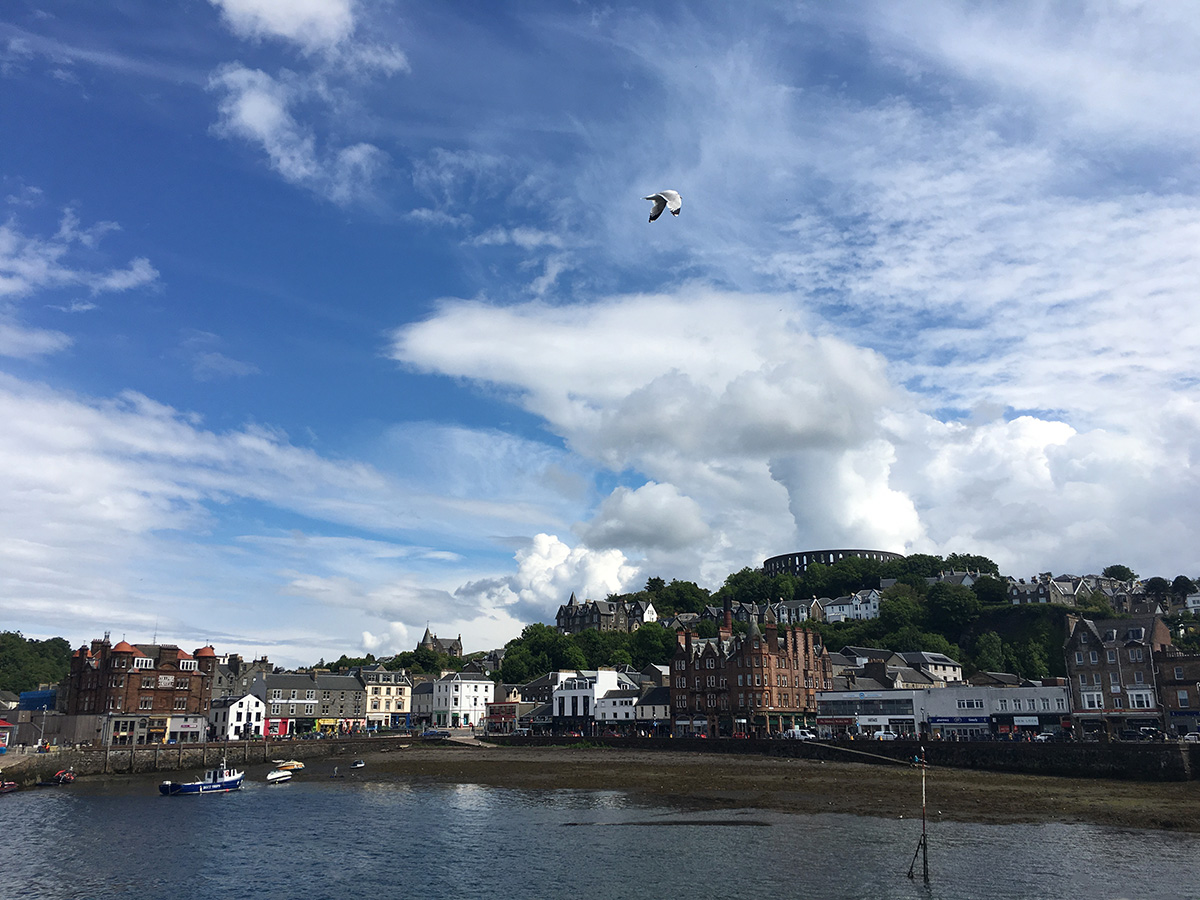 I’d only ever been to Oban briefly twice, 20 and 17 years ago, and the rest of the Scottish Western Isles was uncharted territory for me. I was looking forward to the trip, and the sun shining brightly upon our arrival into Oban only helped fuel the sense of anticipation and summer adventure.

Our voyage was the second West Coast Scotland tour run by Agnes Kay Charters that summer, and although a trip to the abandoned island of St. Kilda was possibly on the books, weather dependent, our sailing plans were flexible and mainly determined by wind, sea conditions, and whether or not each port had berthing space for us for the night.

Our West Coast Scotland Tour on the Agnes Kay II took us to Oban, Kerrara, Mallaig, the Isle of Skye, Tobermory in Mull and back to Oban again before heading up the Caledonian Canal to Inverness.

Here is some of what we got up to…

Oban – the gateway to the Scottish Western Isles

Oban is a popular seaside town in Argyll & Bute, on the west coast of Scotland. It’s easily accessed by the train I mentioned previously, and during the summer months, it can play host to up to 25,000 visitors.

The day we arrived there had been an All Under One Banner march in support of Scottish Independence, so there were an extra 7000 visitors in town just for the demonstration. The town was heaving!

We’d arrived into Oban a night early before our West Coast Scotland tour was to begin, so we spent the first night in the Oban SYHA Youth Hostel  – a well-equipped Victorian villa on the waterfront, centrally located to the pubs and restaurants. This meant we could sample a taste of Scottish nightlife before boarding the Agnes Kay II the following afternoon.

The next day was spent exploring the picturesque resort town. We climbed the short uphill walk up to McCaig’s Tower (pictured below left), walked along the seafront to the ruined Dunollie Castle (past The Dog Stone, below right), climbed to the top of the hill through the forest to see the view out to sea over the canopy and visited St. Columba’s Cathedral.

What to see in Oban

Where to eat in Oban 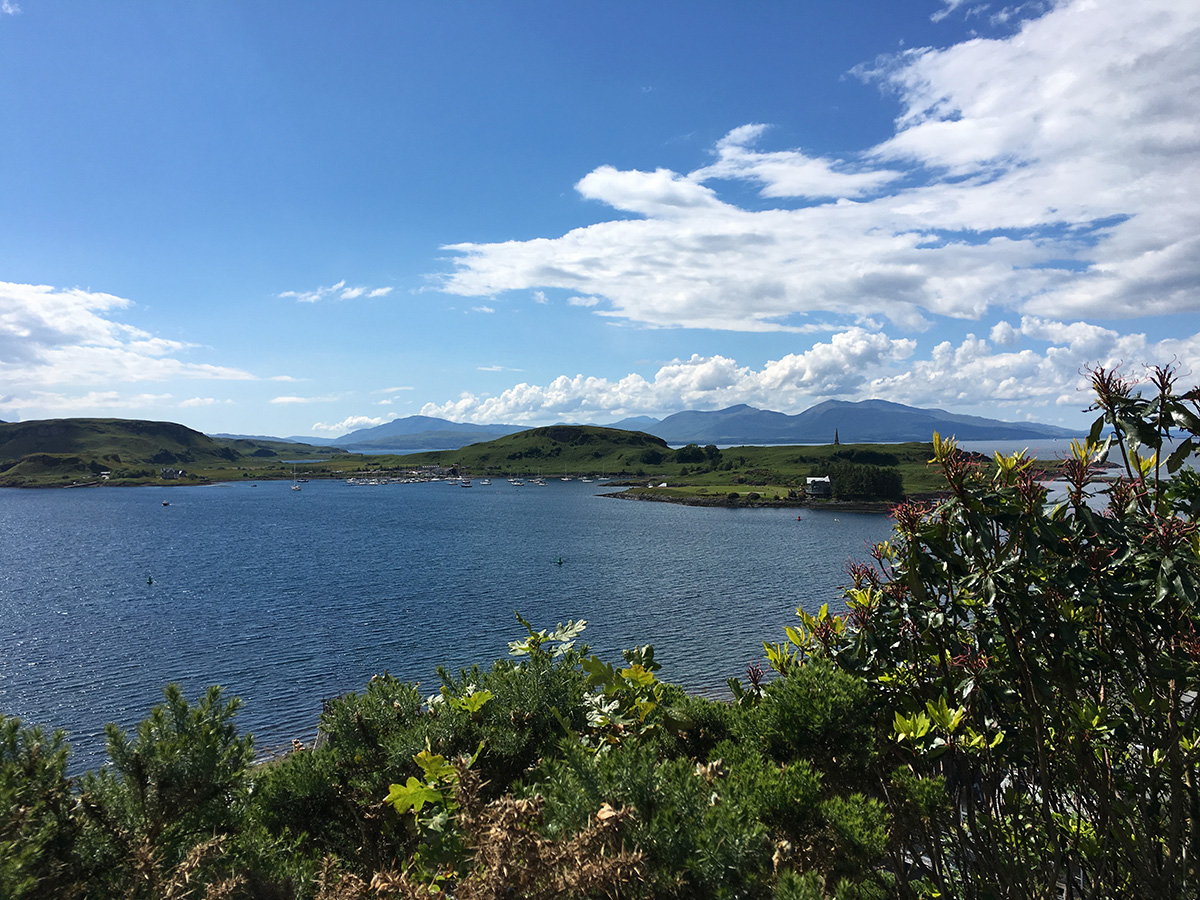 Kerrara – a step back in time

Our first night onboard the Agnes Kay II was spent in the marina at Ardantrive on the island of Kerrara, the isle visible across the water from Oban (pictured above).

It was late in the evening when we crossed over the bay as we had to wait for one remaining passenger, but there was still enough light to explore some of the island.

We visited the obelisk at the north end that serves as a memorial to David Hutcheson, one of the founders of what became Caledonian Macbrayne.

After climbing the nearest hill (as you do – pictured above, centre), there was just enough time before closing to grab a pint at the marina’s pub & grill before heading back to the boat for the night.

What to see in Kerrara

Where to eat & drink in Kerrara 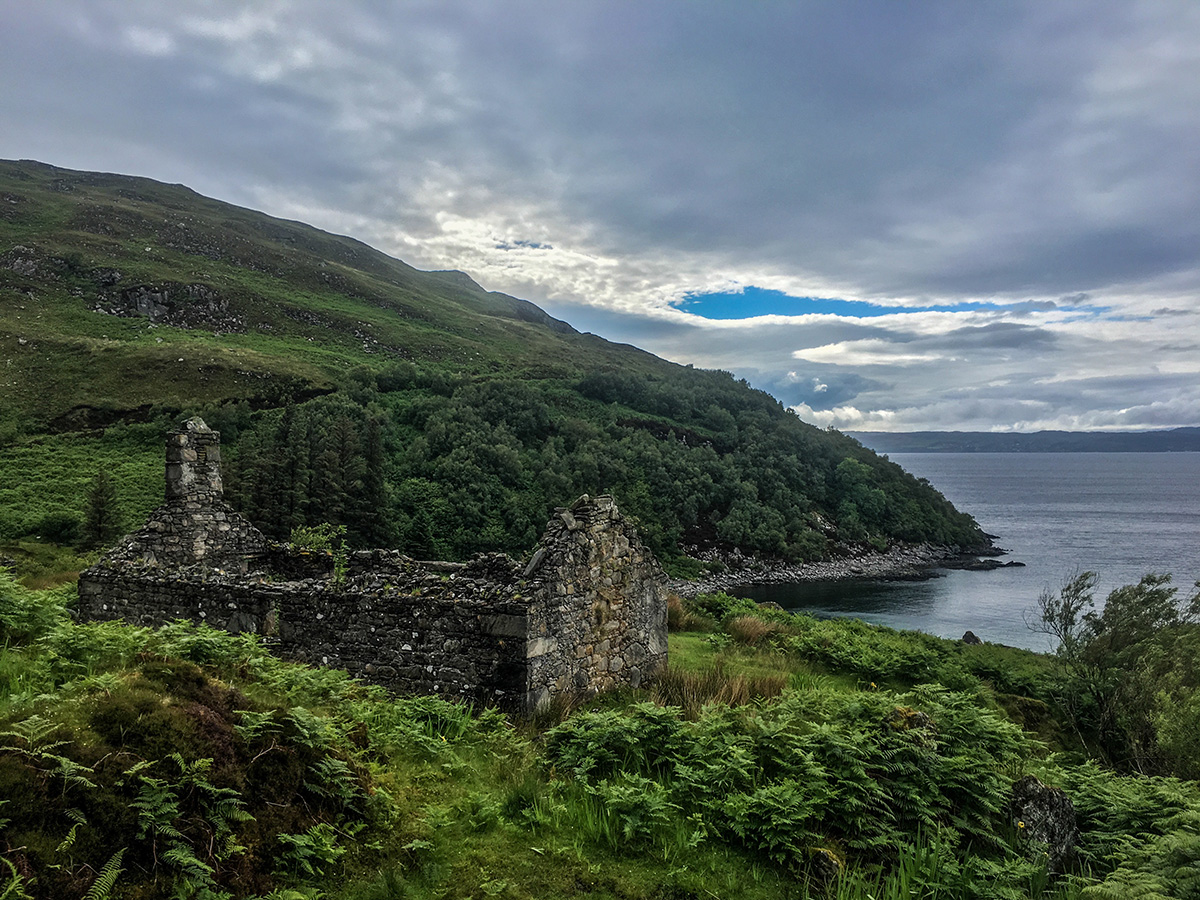 Mallaig – the end of the road to the isles

Early the next morning we set off to Mallaig, a large seaside village laying at the end of the ‘road to the isles’, or if you’ve hopped on the Jacobite Steam Train (the Harry Potter train) in Fort William, this is its terminus.

Mallaig is a working fishing port, focused on the sea and boats, but it has quite a quaint little charm to it. It’s unpretentious, and lovelier for it. There’s some excellent hillwalking in Mallaig, for those into that sort of thing – just follow the Circular Walk signs starting near to the Springbank Guest House.

We went left instead of right at Stage 6 of the Circular Walk I’ve linked to below, which took us to a gorgeous little glen with a whitewashed house (pictured below, left), burbling burn and croft ruins (pictured above). We backtracked along this road and carried on back to the village to catch up with the rest of the Agnes Kay II passengers for a gorgeous seafood dinner at The Fishmarket Restaurant on Station Road (below, right). This might have preceded a visit to a couple of Mallaig’s top night spots.

What to see in Mallaig

Where to eat & drink in Mallaig 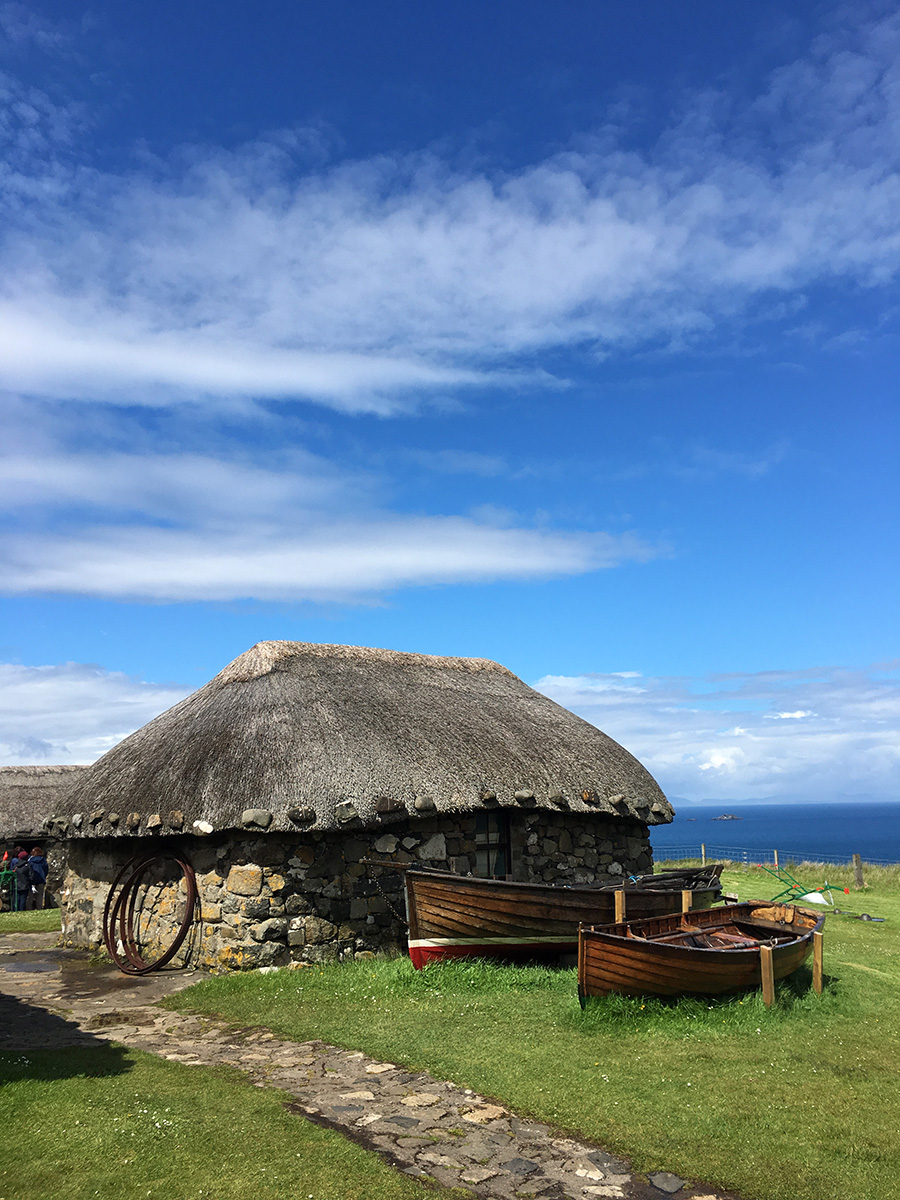 The Isle of Skye

After Mallaig, we headed north to the Isle of Skye for a two-night stay in Portree. It was absolutely magical passing beneath the Skye Bridge, the spectacular bridge connecting the islands of Eilean Bàn and Skye. I do confess there might have been some mental humming of the Outlander theme tune as we sailed this piece of the sea up to Portree. I’ve never denied the fact that I do, more often than not, live a life enhanced by what’s going on in my imagination.

My maternal family lineage can be traced back to the MacLeod’s of Skye and in 1828 they boarded a ship destined for Cape Breton Island, where I grew up.

Visiting Skye has been something I’ve always wanted to do (along with a large number of other North American Scot’s descendants – Skye receives an extraordinary number of overseas tourists every year!), so to have this opportunity, and do it by boat, well, that was something pretty special for me.

I’ll be writing a separate blog post about what we got up to on Skye, as we did pack in a lot of activities, but one of the highlights for me was a half-day bus tour of the Trotternish peninsula. This tour of North Skye took in the Old Man of Storr, Kilt Rock and the Mealt Waterfall, The Quiraing and the Skye Museum of Island Life (pictured above).

Things to see in North Skye 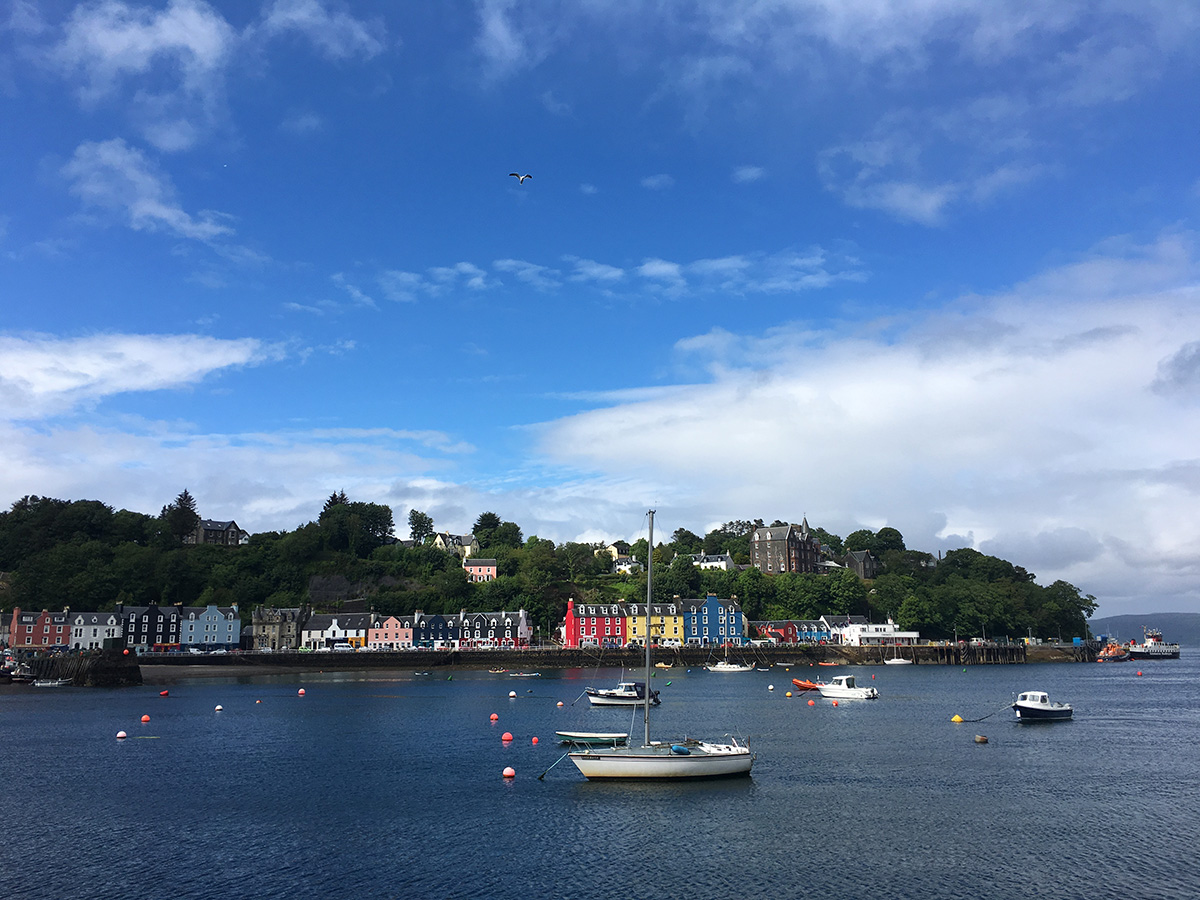 Tobermory – The Isle of Mull

These painted houses have been on my travel bucket list ever since I watched the 200-and some odd episodes of the BBC’s Balamory with my eldest son when he was a wee boy (he’s 19 now!). I was absolutely delighted that a visit to Tobermory, on the Isle of Mull, was part of our West Coast Scotland tour.

Tobermory is the main town on the Isle of Mull, and it’s one of the prettiest ports in Scotland. With its rows of coloured houses, quaint little shops and eateries, it’s got a nice holiday vibe to it. Don’t forget to try some of the seriously good Tobermory Whisky Marmalade ice cream at the Isle of Mull Ice Cream Parlour.

For those who like walking, there are plenty of well-maintained paths to explore – follow the road near the RNLI lifeboat station and you’ll find a path leading to the Rubha nan Gall Lighthouse. It’s a 25-minute walk, but well worth it.

On the south side of Tobermory, you’ll find Aros Park, a recreational woodland with plenty of walking trails. Follow the Lochan Trail around Lochan a Ghurrabain (and its beautiful Hylas and the Nymphs by Waterhouse-esque water lilies) taking in the mature beech, oak and Cyprus trees, and don’t forget to visit the Aros Burn Waterfall.

Things to see in Tobermory

Places to eat in Tobermory 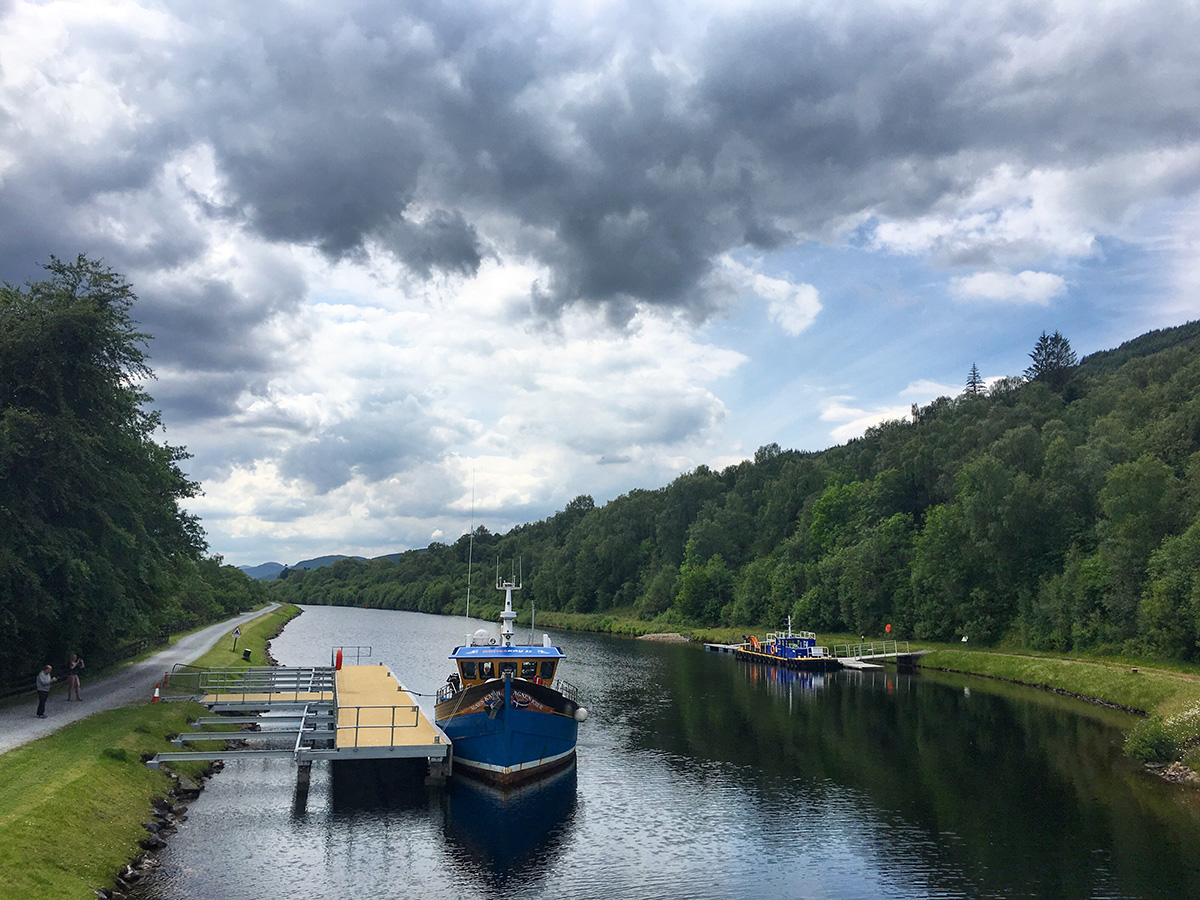 Not all of the West Coast Scotland tours on the Agnes Kay II include a trip up the Caledonian Canal; just the last one of the season. I was delighted to be on board for this part of the journey too.

The Caledonian Canal is a 60-mile long canal up the Great Glen. It starts in Corpach just outside Fort William and finishes in Inverness. Designed by Thomas Telford and completed in 1822, the canal is a series of 29 locks, 4 aqueducts and 10 bridges. Only one-third of the canal is man-made, with the rest of it comprising Loch Lochy, Loch Oich, Loch Ness and Loch Dochfour.

I really enjoyed this part of the trip, spending quite a bit of time sitting outside in the aft of the boat, feet up on the railing, leisurely watching the sights pass by. 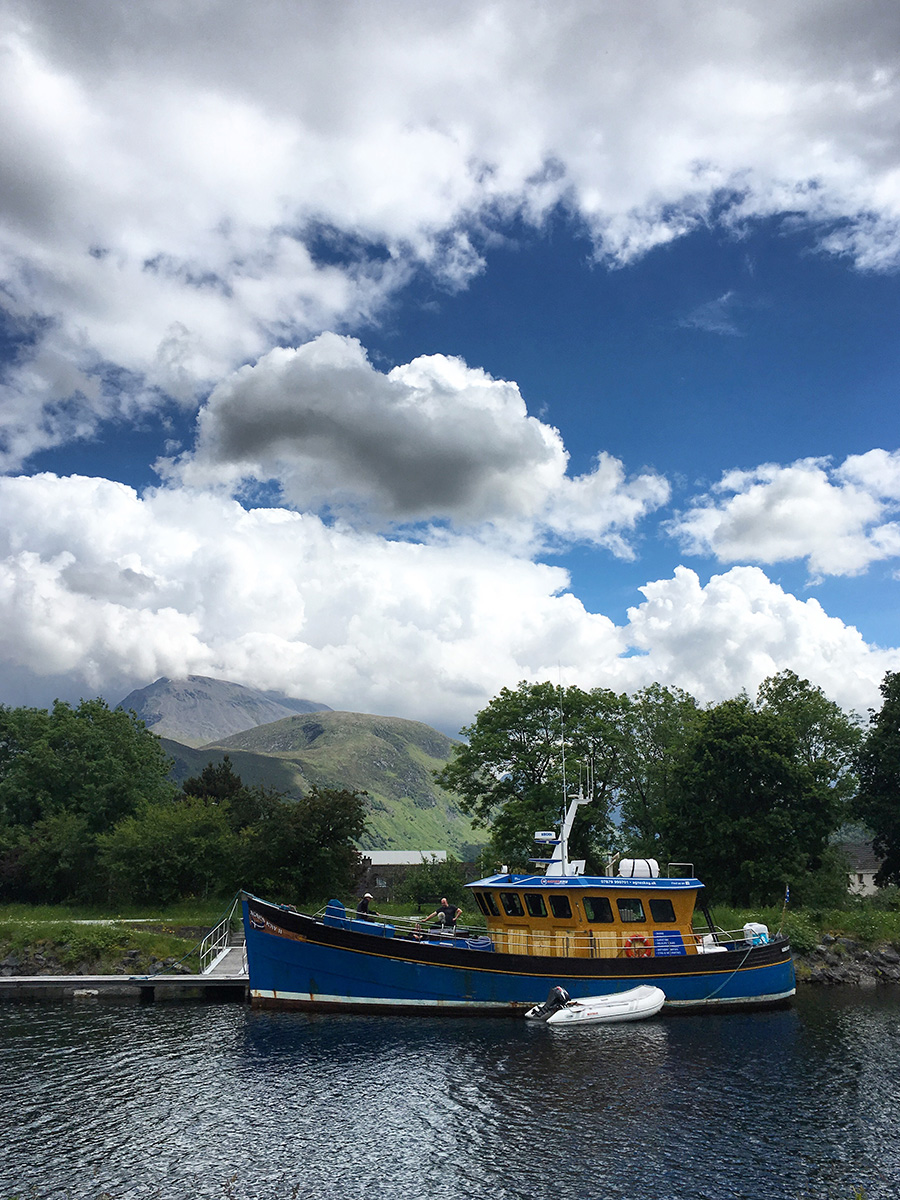 I’d bike packed from Inverness to Fort William down the Great Glen Way a few summers ago, and much of the trail was alongside the canal. It was quite nice (and a lot less physical work) to do the return journey via the water.

We’d finished our epic 400-mile bike-packing trip by camping at the base of Ben Nevis and climbing up (and down!) the mountain in 5 hours and 9 minutes. Three years later to the day, I took the above photograph: the Agnes Kay II berthed for the night in Corpach with Ben Nevis in the background.

Highlights of the Caledonian Canal included Neptune’s Staircase, Britain’s longest staircase lock comprising 8 locks (pictured below, left), the view of Urquart Castle on the banks of Loch Ness from the water, and a night of partying in Fort Augustus.

By the time we’d reached the end of the canal, I’d learned how to throw the line straight onto the bollard onshore. I kept the boat secure as the lock drained, releasing the rope as needed. Then, with a deft flick of the wrist, I unfastened the line from the bollard to slip us off. I felt like a proper sea woman; a perfect way to finish a 9-day West Coast Scotland tour.

What to see on the Caledonian Canal

Where to eat on the Caledonian Canal 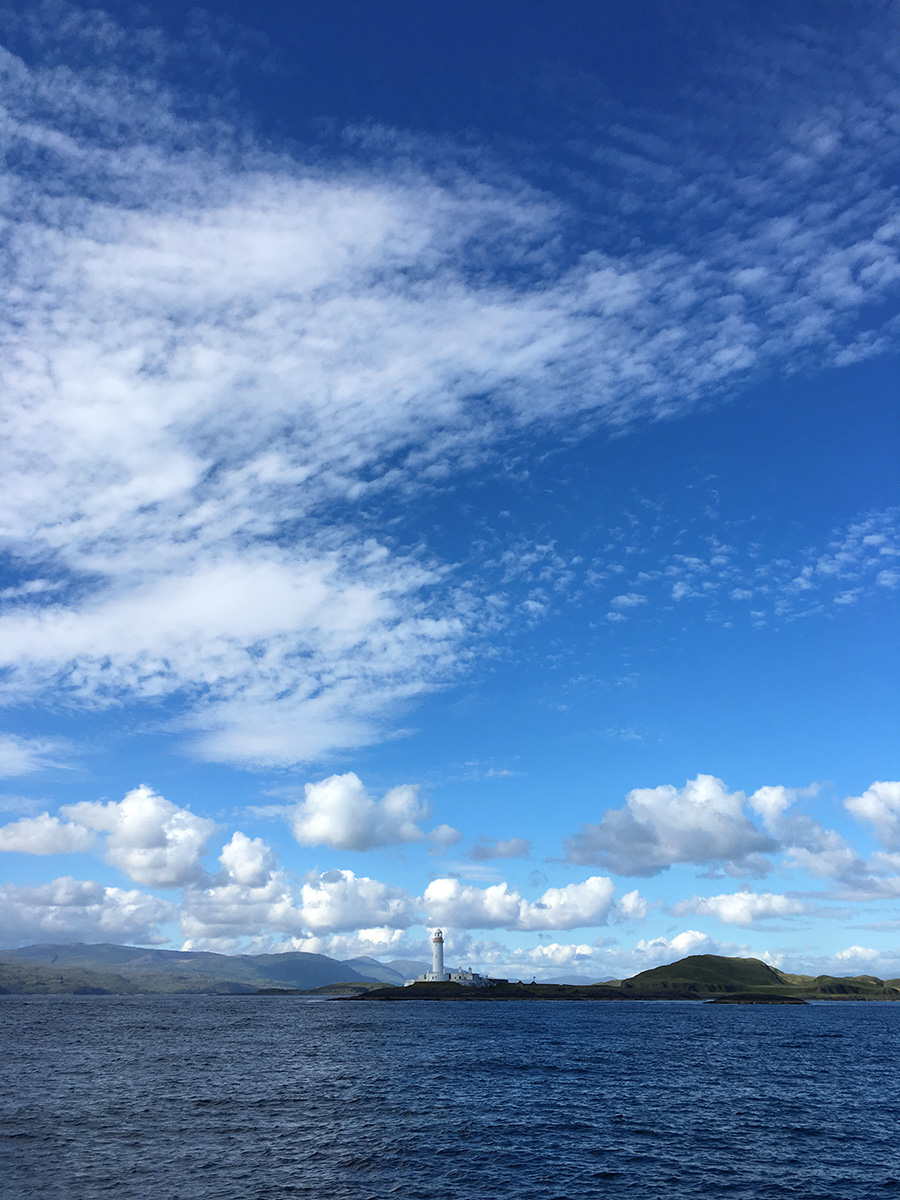 What is the Agnes Kay II?

The Agnes Kay II is a renovated 1961 fishing boat built for fishing in Scottish waters. It is sturdy and reliable, able to withstand what the Scottish seas might throw at it. It’s oozing with character and charm, reminding me of all my childhood treehouses in one floating home.

Agnes Kay is the name of skipper Ewan Anderson’s grandmother from Whalsay.

What facilities are available onboard?

There are six spacious, comfortable bunks in the en-suite fore-cabin, where the original fish store used to be. There are also four coffin beds in the original crew quarters in the aft cabin. I actually preferred these coffin beds, built into the walls of the ship. I had some of the best night’s sleep I’ve had in years in my cabin; a bit like sleeping in the belly of a dragon when the engine was on and we were at sea.

There are a gas hob, oven and a mini-fridge, so meals can be prepared and eaten on board if desired. There is also plenty of electricity and outlets for charging phones, laptops, etc.

How much does a West Coast Scotland Tour cost?

I love the look of this boat – I want to hire her for an adventure of my own!

You should do that! Ewan is happy to hear your plans for a bespoke adventure. Honestly, you’ll never meet a more laid back guy. Let Ewan know about the adventures you’re dreaming of and see if he can help!

Do Agnes Kay Charters run any other trips?

Yes, the Agnes Kay II visits the Isle of Man every year for the legendary TT Motorbike Races. There are also trips to the Norwegian Fjords as well as trips around the Shetland Islands. The Agnes Kay II is also available for fishing charters. At the time of writing, she’s in Orkney with a crew of fisherman. Have a look at the 2019 Trips page for inspiration.

Elizabeth’s Kitchen Diary was a guest on board the Agnes Kay II for this West Coast Scotland trip. All thoughts and opinions expressed are our own.