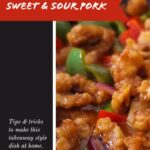 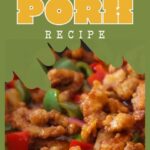 Originally published in May 2014. Updated and republished with new images and information in May 2021. This recipe is suitable for gluten-free diets.

Why you want to make this…

In it, crispy twice-cooked pork shoulder strips are coated in a deliciously tangy sweet and sour sauce and served with pineapple chunks, sweet bell peppers and onions.

This recipe has always been a hit with my kids; they think it tastes just like a Chinese takeaway meal does.

Clean plates all around too, for the win!

How to make it…

Where does sweet and sour pork come from?

Sweet and sour pork is a classic Cantonese dish from the Guangdong province in China. The Chinese call it gu lao rou 咕咾肉, and although there are many different recipes, most involve pork, pineapple and bell peppers.

What’s the best pork for sweet and sour pork?

Pork shoulder cuts make for a more flavoursome finished dish because they contain more fat. Alternatively, use neck fillet or tenderloin. We recommend sourcing your meat from a UK-bred high-welfare farm.

Why is Chinese takeaway meat so tender?

Chinese takeaway meat is so tender and silky because they use a special technique called velveting. Velveting (tenderising) is a method of marinating meat with cornstarch and a little bit of egg, soy sauce and/or oil before cooking.

This creates a layer of silkiness around the protein which you will recognise from Chinese takeaways.

How do you make pork crispy?

Double frying the pork after it’s been marinaded and dredged in cornflour coats the meat in a protective, crispy layer, which means it’ll remain crispy when mixed with the sauce.

Serve immediately with rice or noodles. 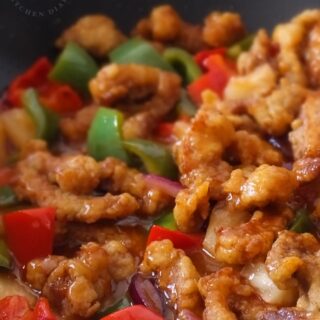 For the crispy twice-cooked pork

For the sweet and sour sauce

A typical 435 gram tin of sliced pineapple in the juice will give you enough pineapple to make this recipe, plus 4 slices leftover for a pineapple upside-down cake for afters if you fancy!

Tried this recipe?Mention @TangoRaindrop or tag #elizabethskitchendiary – we’d love to see what you’ve been making!