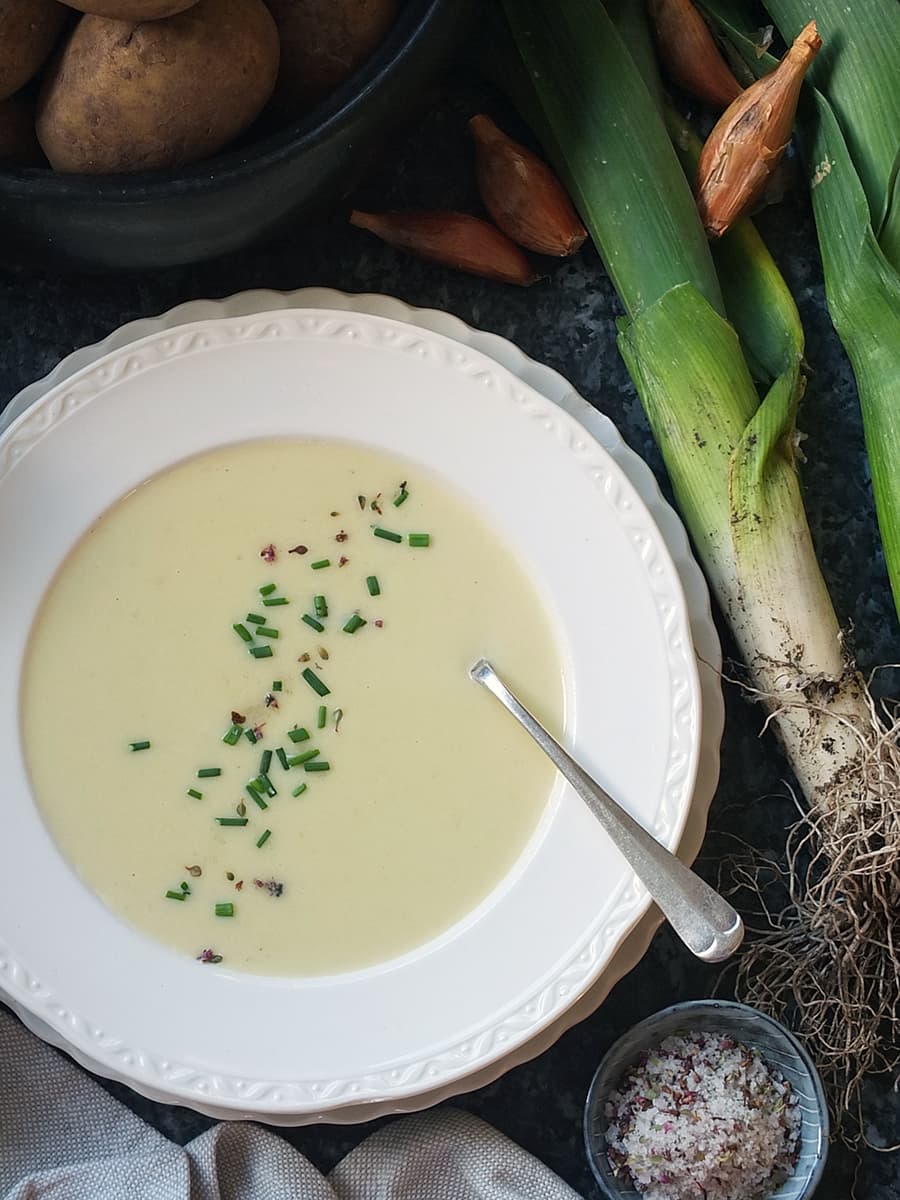 With just a few simple seasonal ingredients, you can create a warming, creamy potato and leek soup that pairs perfectly with salt beef bannocks or warm, crusty bread.

Nothing beats a bowl of thick, creamy, piping hot soup to warm you up this time of year. It’s the first day of Spring today, but there’s still a winter chill in the air. The snowdrops are blooming, the daffodils are pushing their way up through the earth and the days are rapidly lengthening. I heard my first skylark of the season earlier this week too, spotted my first dog daisy and the frogs have come out of their hibernation. We ‘rescued’ one on the side of the road the other day, spotted as we cycled past. It’s still cold outside though.

With the brighter days and stirrings of new life comes a natural desire, in me at least, to spend more time outdoors. Last week I began the arduous task of turning over the earth for a new vegetable allotment, and my road bike has (fingers crossed) come off the turbo for the season.

I’m still craving soup occasionally, on those colder days, especially those days spent outside adventuring. Leeks are one of the few British-grown vegetables still in season right now, being harvested between September and May each year, so they’re perfect for cold weather soup making.

I had intended on blogging this tattie & leek soup recipe a year and a half ago when I teamed up with Keiba Film and Taste of Shetland to create a short ‘Faerdie Maet’ promotional film. Life, however, got it in the way, as it is wont to do.

The Taste of Shetland film was all about using local Shetland-grown produce to create a recipe you could take on the road with you, something for a journey. In this case, I made hot soup with local tatties, leeks, shallots, milk, cream and butter to take on a picnic. Chives from my neighbours garden were used as a garnish and I served the soup with some salt beef bannocks.

I’ve spent many an afternoon sheltering from the crisp north wind behind a low stone wall warming my cold hands cupping a mug of hot soup like this recipe.

Tattie and leek, potato and leek, leek and potato…. whatever you call it, it’s one of my favourites. For me, it’s something associated with Shetland as I’d never had this type of soup before moving here. Truth be told, I’d rarely cooked with leeks before moving to the UK.

I remember being quite perplexed when I bought my first leek in a wholefoods shop back in Canada in my early 20s. I had no idea what to do with it, and an internet search turned up a recipe for ‘frizzled leeks‘: thinly sliced leeks cooked in plenty of vegetable oil (basically deep-fried leeks). This recipe certainly did not convince of the merits of this vegetable, but now that I think of it, frizzled leeks would make for a rather fabulous textured potato and leek soup garnish. Next time!

By the 19th century, soups made with pureed leek and potato were popular in France. Traditionally served cold, vichyssoise, as it now is known after it’s invention in America, was a favourite of King Louis XV.

Me, I prefer mine hot, and this is how I make it…

For this recipe, you’ll need…

How to make potato and leek soup

How to wash and cut leeks

Which bit of the leek do you use?

The whites and light green parts of the leek are the parts most commonly eaten. The dark green bits are edible, but they have more of a bitter, pungent flavour and so are usually discarded. Saying that some cooks like the strong flavour of the dark green ends. You could always leave them in to see what you think.

What potatoes are best for soup?

For a deliciously smooth, creamy potato and leek soup you want to use a starchy, floury potato – the kind you’d make mashed potatoes with. Here in Shetland, I prefer using J.K. Mainland’s premiere potatoes.

Waxy potatoes, the kind you’d bake and load with baked beans and mature cheddar cheese, take too long to break down in the soup. This can result in a grainy texture. However, these, and waxy new potatoes, are perfect if you want to retain the texture of the potato in your soup. Cut them smaller and leave them in pieces instead.

I recently attended a video training workshop through Scotland Food & Drink (via Taste of Shetland) in a bid to improve the videos I create for you.

My homework, after the masterclass, was to shoot, edit and promote a video. I chose this recipe to try out some new skills: namely, shooting a video from two angles.

You can view the video in the recipe card below. Disable your adblocker if you can’t see it. The money I’ll earn from the short ad you’ll see before the video (as well as the in-content ads you’ll view in this blog post) helps me keep this website running and I will be infinitely grateful. 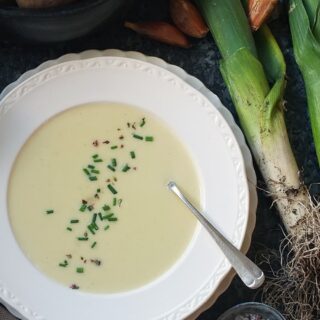 Metric – US Cup Measures
Prevent your screen from going dark

How long will potato and leek soup keep in the fridge?

This recipe will keep for 3 days, covered, in the fridge.

Can you freeze potato and leek soup?

This recipe does not freeze well.

Tried this recipe?Mention @TangoRaindrop or tag #elizabethskitchendiary – we’d love to see what you’ve been making!

Pin this potato and leek soup recipe for later 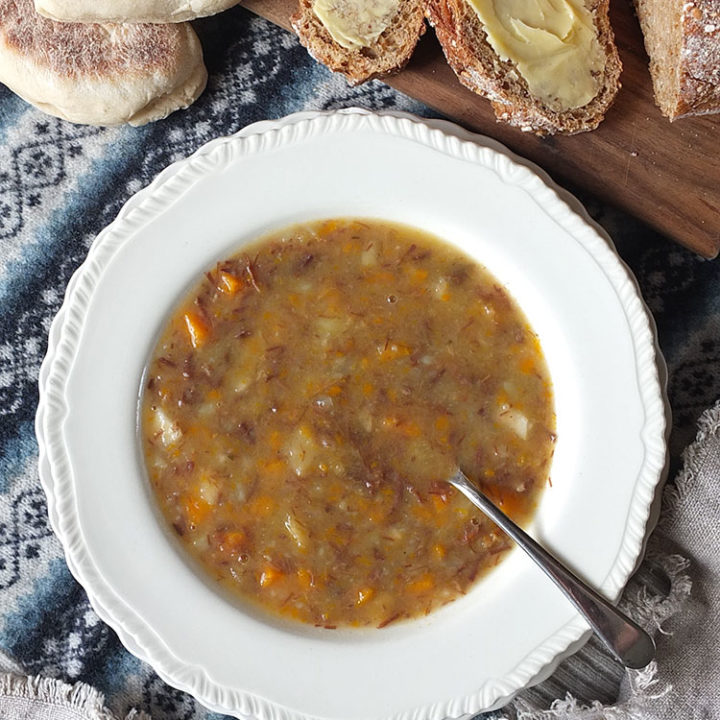 Hearty and filling, this traditional soup from the wild and remote Shetland Islands is made from reestit mutton, a salted and brined preserved mutton unique to the islands. 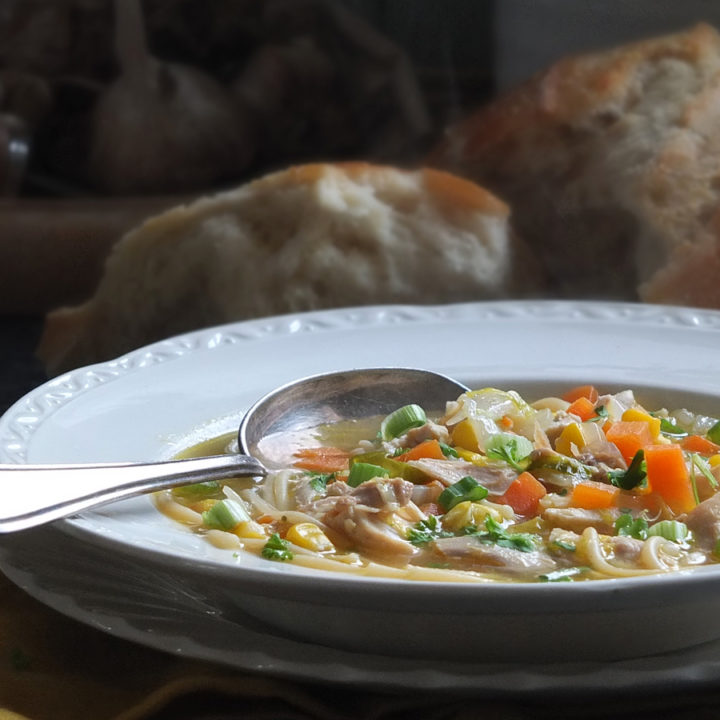 This easy, versatile chicken noodle soup recipe is made with leftovers from a Sunday roast chicken dinner, including leftover gravy. It’s easy to tailor the recipe too depending on what you have lurking in your fridge needing to be used up. 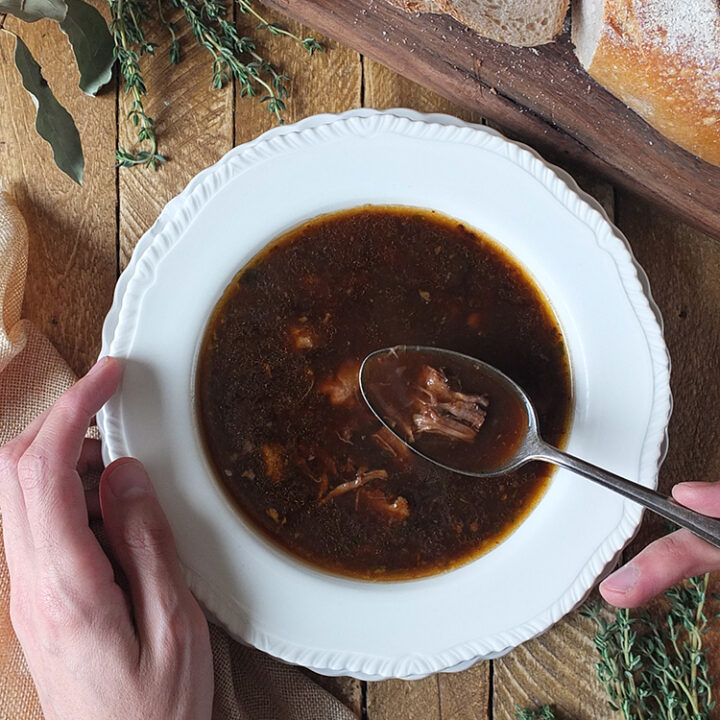 A simple, yet incredibly rich and delicious oxtail soup recipe made extra easy by slow-cooking in a Crock Pot.