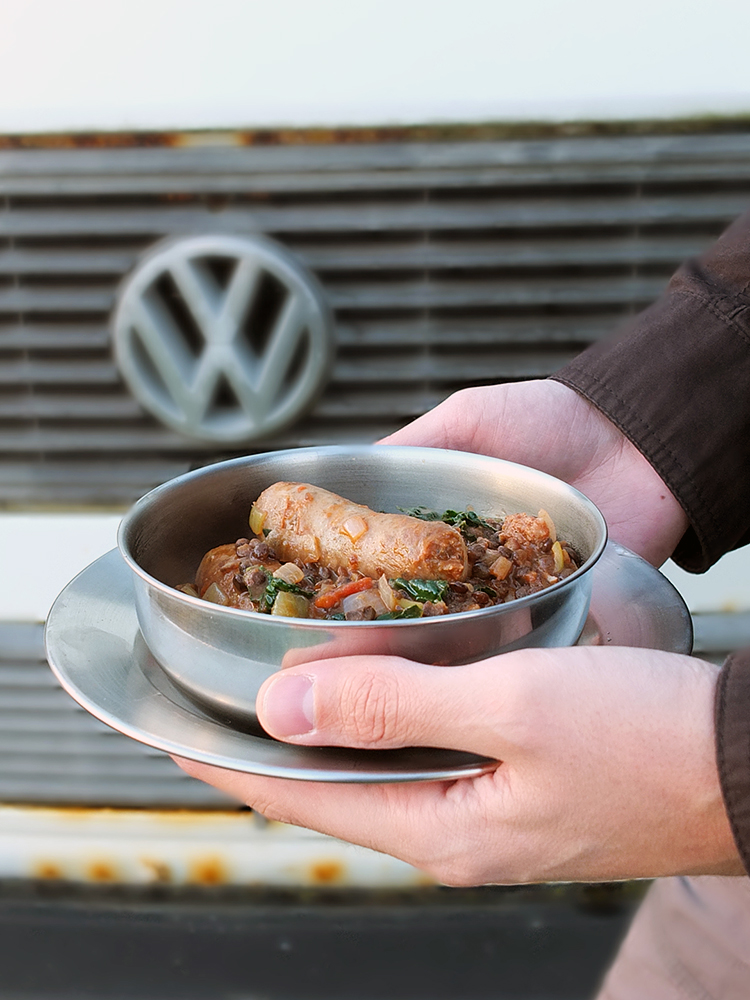 There is something intensely satisfying about cooking outdoors over an open wood campfire. The experience of cooking the meal is almost, if not more, pleasurable than the experience of eating it, in my humble opinion.

A few summers ago we took the children south to the mainland for the very first time. We loaded up our old knackered vehicle with all the provisions we’d need for a fortnight’s travelling and glamping, and headed to the mainland via the overnight ferry. 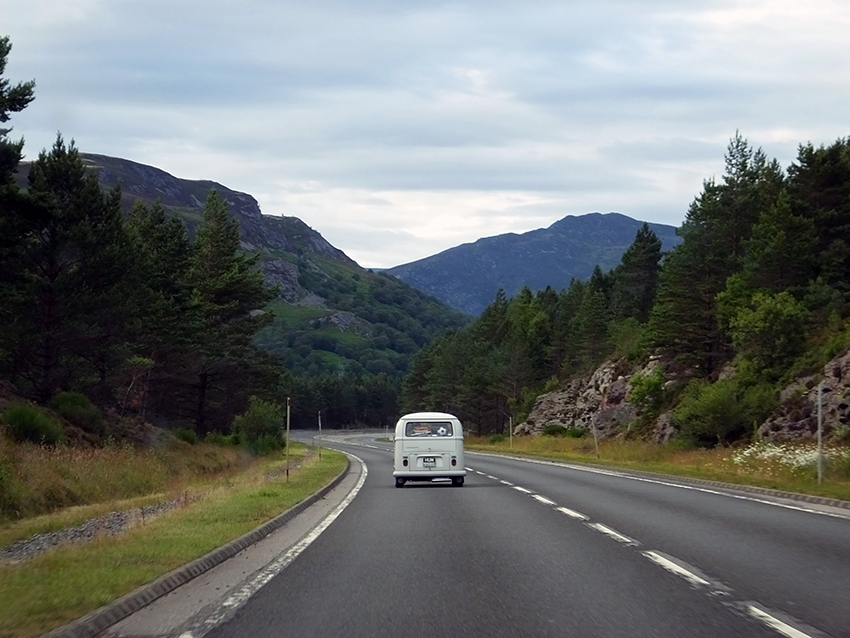 From Scotland and a drive through the scenic Cairngorms, we drove South to the Lake District and glamped for five nights in a camping pod in the centre of the picturesque popular tourist destination. Fortunately, the English schools hadn’t yet broken for the summer holidays like our Scots schools had, so the campsite (during the week) was quiet and relaxing.

I don’t know if you’ve ever gone on a road trip with your family, but feeding a family can quickly become very expensive if you’re eating at cafes and restaurants for three meals a day. In an attempt to keep the expenditure down I’d packed a few kitchen essentials with me. Namely, one cast iron skillet, one cast iron pot, and a BBQ grill to act as a stove top when placed over an open fire. 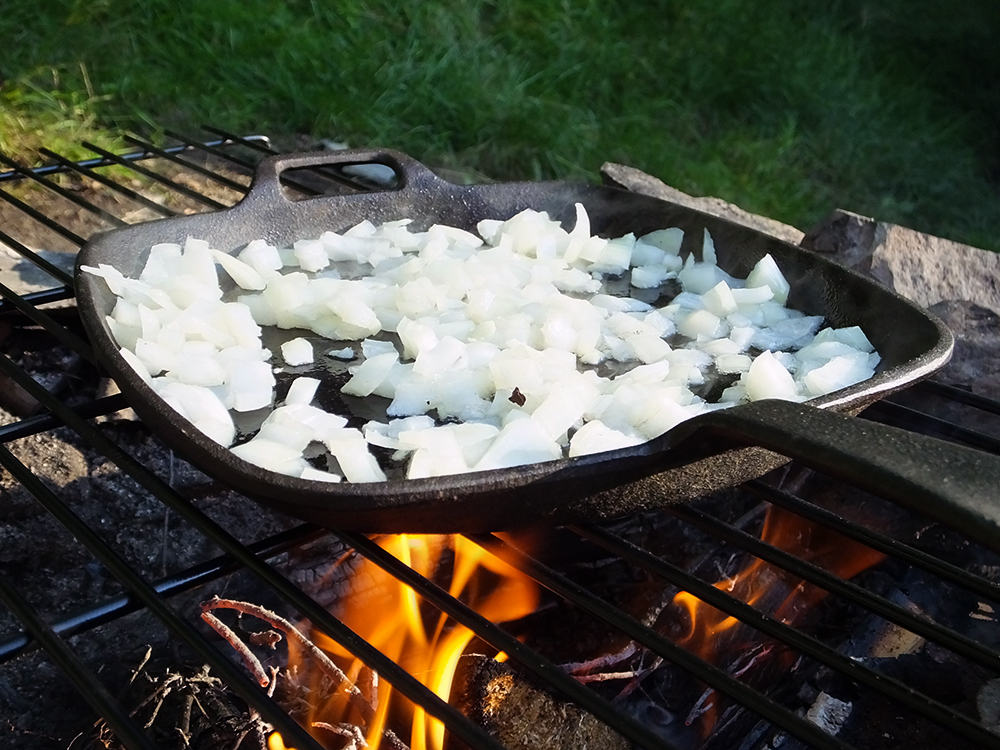 I can’t even begin to tell you how much fun I had cooking over this fire. Regular readers will know that I live on a treeless, windswept island in the middle of the North Sea, despite my rural Canadian upbringing. I miss trees. I miss campfires, and sleeping in the woods, so this trip to the Lake District was my idea of heaven. Cooking over this fire was something I’d really looked forward to, so I planned a few meals, including this sausages with puy lentils and kale one.

We’d chosen this particular campsite for its location and that it allowed open fires, as long as you purchased bags of wood from the campsite owner. 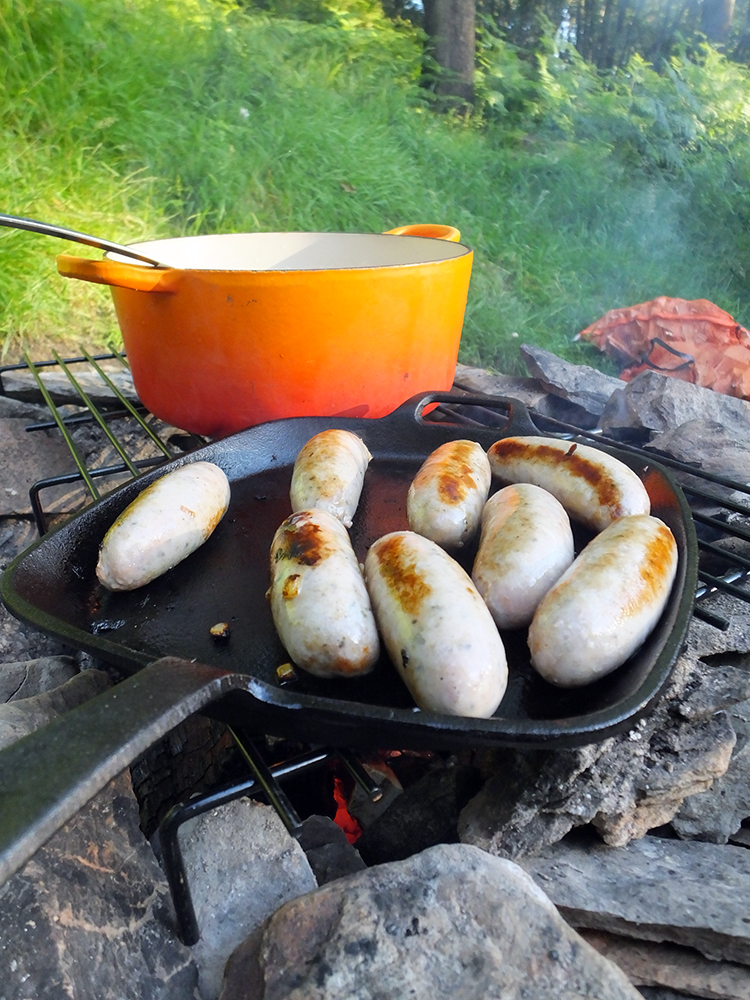 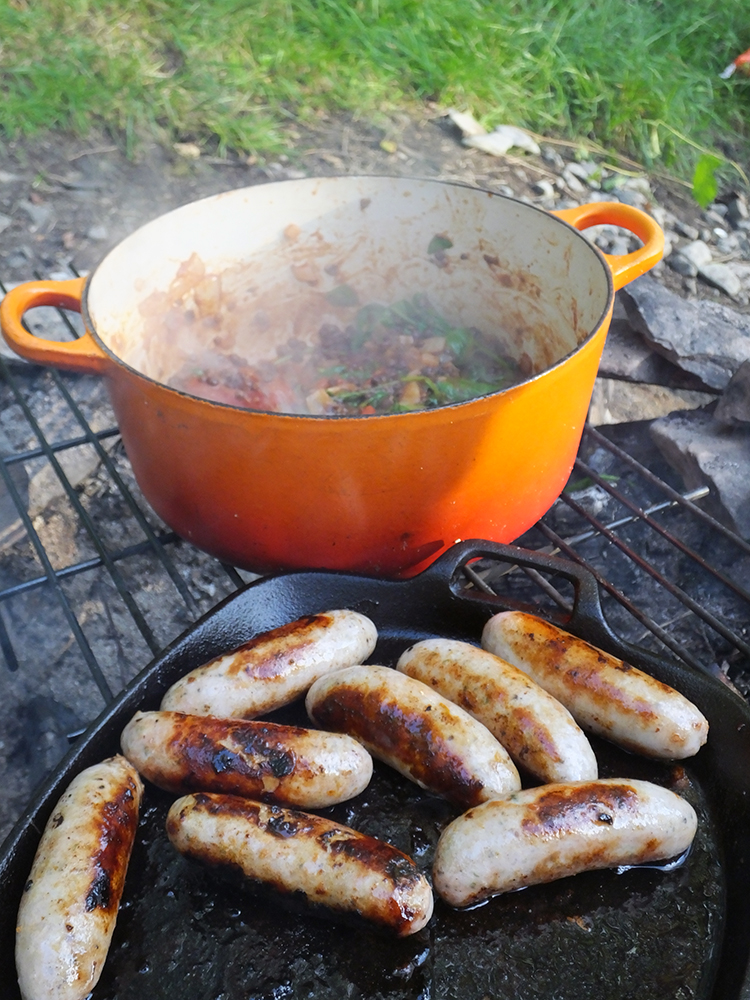 Given that we were in the heart of Cumbria we purchased some mighty fine Cumberland sausages at a local shop, and I set to cooking. The children played, my husband and I sipped the rest of the bottle of wine after a splash went into this dish, the sun shone and the birds sang. Summer holiday bliss.

The resulting meal, I have to confess, was rather hearty and delicious. Cooking outdoors on wood imparts a delicious wood-smoke flavour to a meal, and after a day spent adventuring at a nearby Go Ape facility and walking some of the trails in the area, we had hefty appetites. 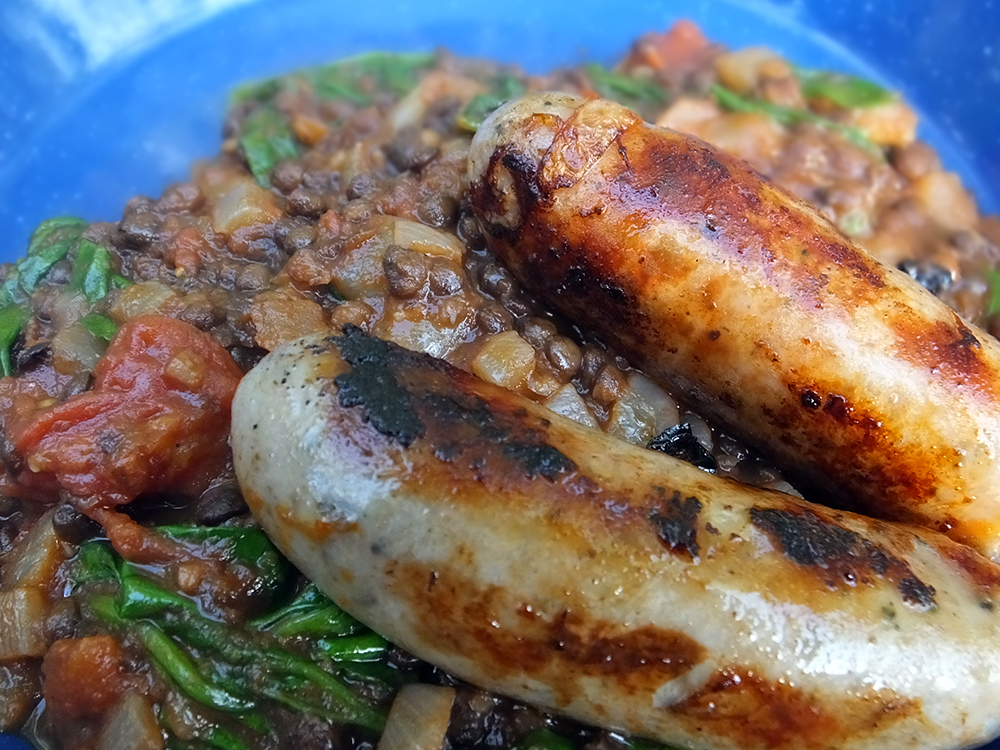 Ok, it might not be the most picturesque of all outdoor foodstuffs, but I tell you – this sausage dish is rather delicious, and it’s simple to make too. You could even save chopping time (and having to lug a sharp knife and chopping board with you camping) by buying ready chopped onions. Another tip of mine is to decant some vegetable oil into a small glass or plastic bottle to cook with before you leave home. Someone needs to come up with camping size bottles of vegetable oil because the smallest size I’ve ever seen is 250 ml, and that’s an awful lot of oil to carry around for a fortnight’s camping.

You could use a tin or two of ready cooked puy lentils for this recipe (because who wants to faff around with soaking and boiling pulses for ages), or use a sachet of ready cooked.

I find pork sausages work really well with this recipe, but feel free to use beef if that’s your preference. A good few handfuls of kale or spinach stirred in at the end make for a rather nutritious dish too, I think.

Now, for a few of my favourite holiday snaps….. 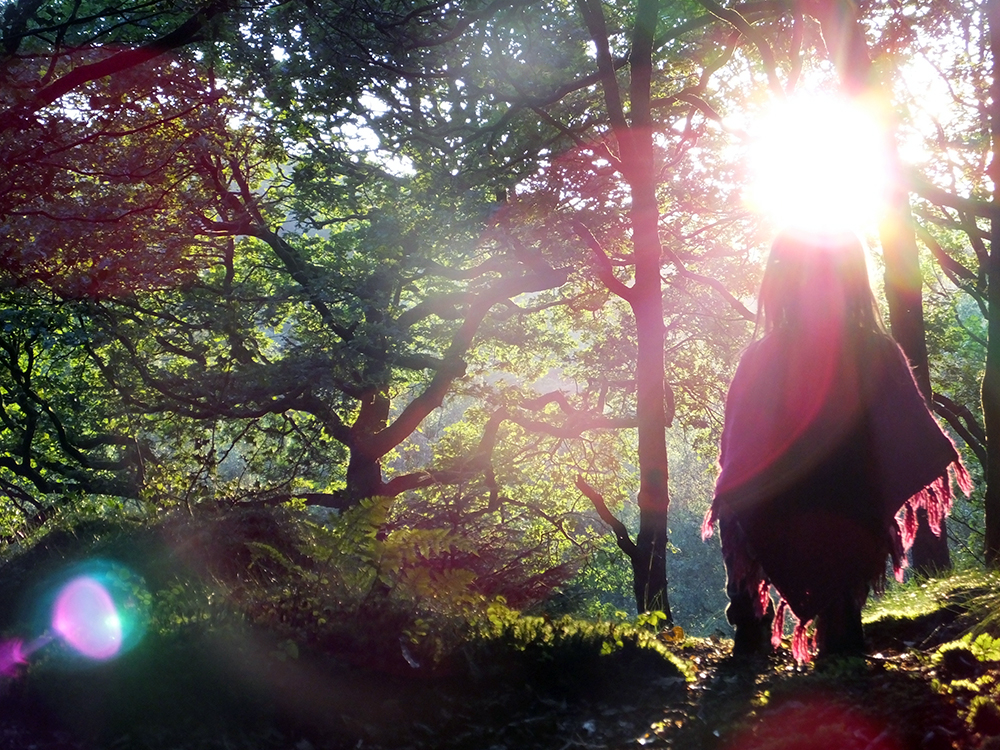 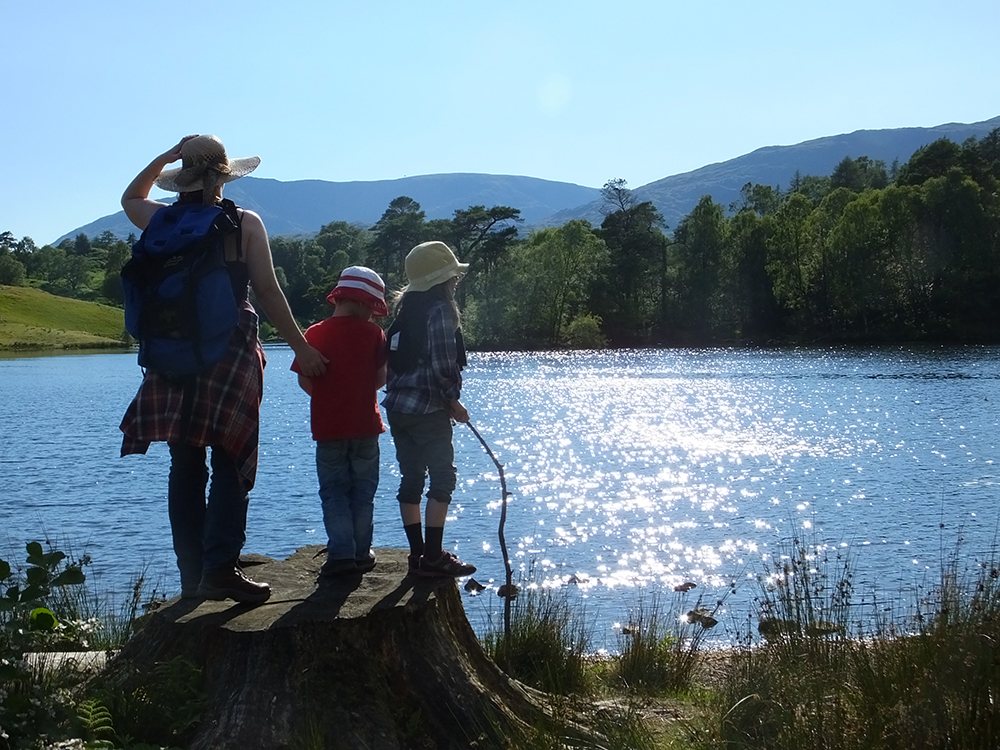 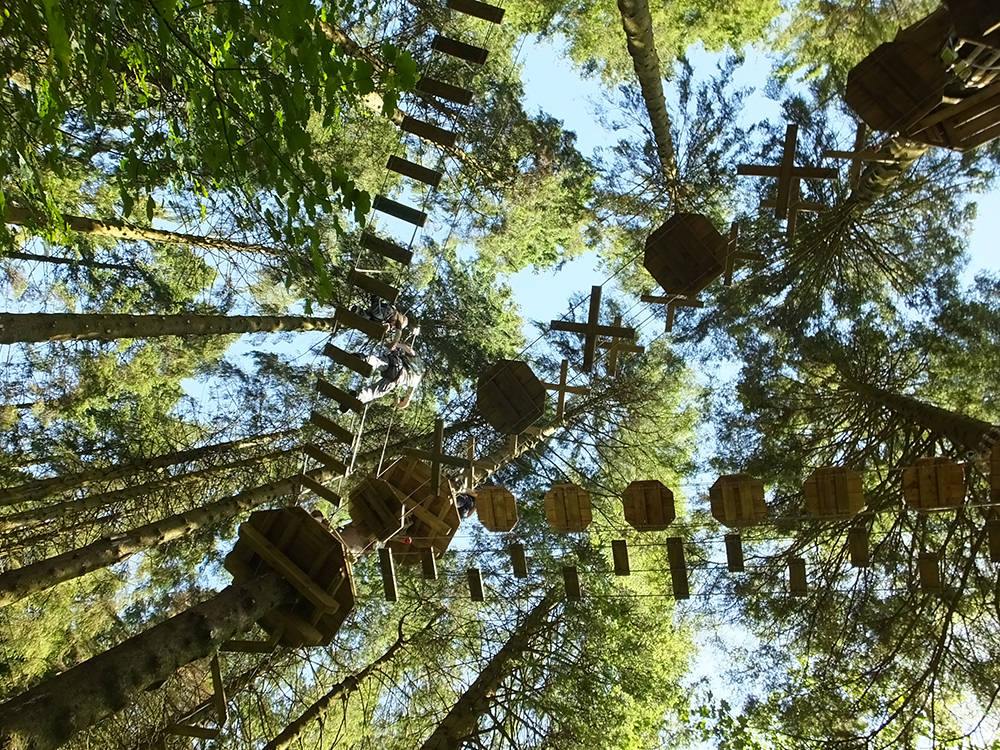 This holiday was a once in a lifetime experience for us. As it was the first time our younger two children had ever been to the mainland we made sure we gave them as many new experiences as we could. They’d never seen a real forest before, so a visit to a nearby Go Ape facility was a must. They’d never been on a train before then either, so the first train trip they ever took was on a steam train in Haverthwaite. Not many children can say that these days, can they!

Ah, memories. That’s what road trips are all about, aren’t they.

What’s your favourite outdoor cooking dish? Do you have a family favourite? If you’re looking for more travel-inspired recipes do visit the Volkswagen Pinterest community board – Food Bloggers for Volkswagen. 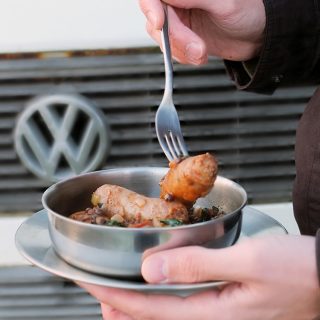 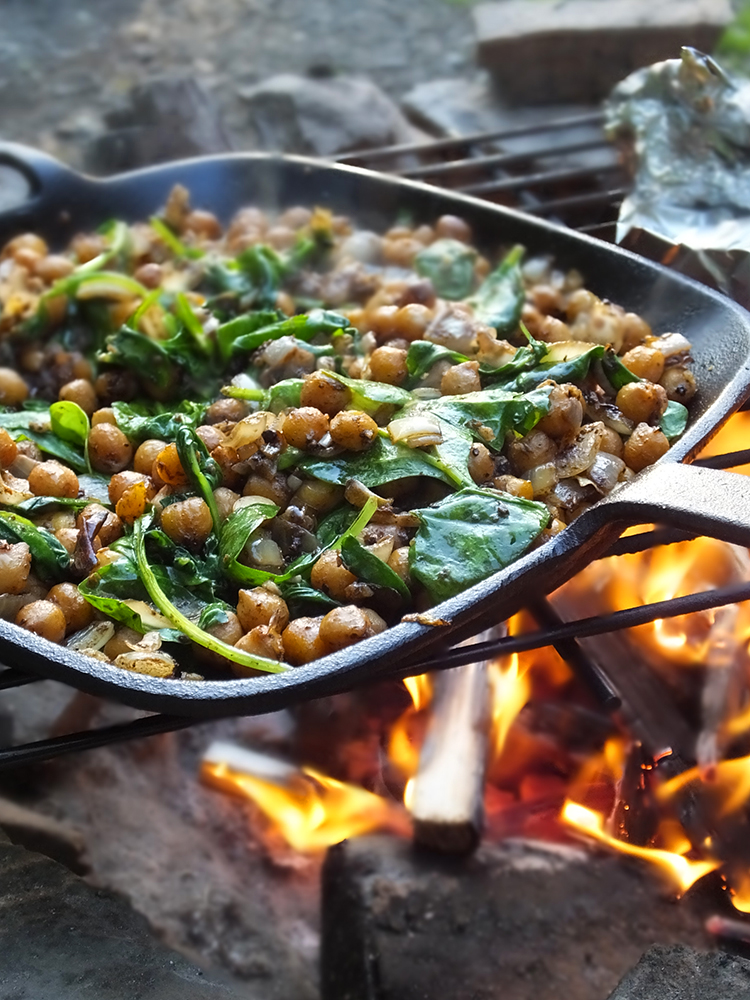 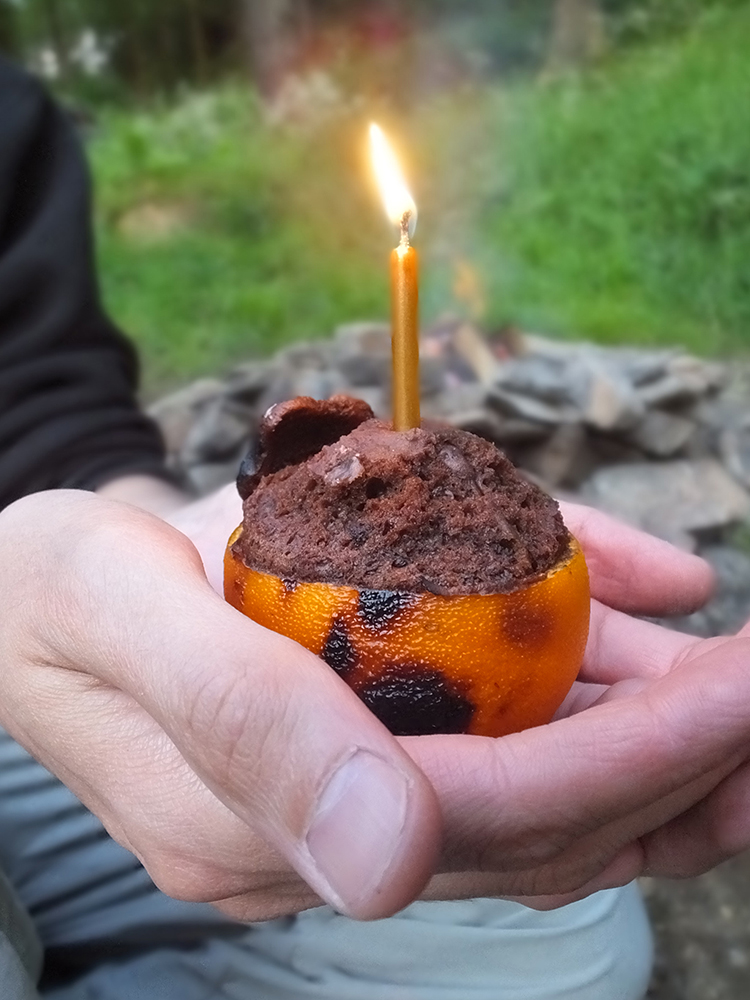 OTHER ADVENTURES WE GOT UP TO ON THIS ROAD TRIP
To the trees! Our adventures in the Lake District
Cullen skink at the top of a mountain
Mountain biking in the Cairngorms
The National Trust: Tarn Hows

This is a sponsored recipe post commissioned by Volkswagen, although all thoughts and opinions expressed are our own. Thank you for supporting the brands who make it possible for me to do what I love: mess up my kitchen and share recipe stories.

#ad New recipe on the blog! My kids are absolutely