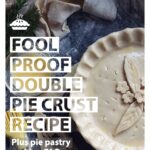 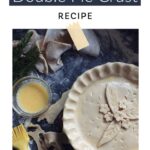 This fail-proof pie crust recipe was my English grandmother’s recipe, brought over with her to Canada when she immigrated just after the Second World War. It’s got all the nostalgia for me, and so this is my go-to recipe. 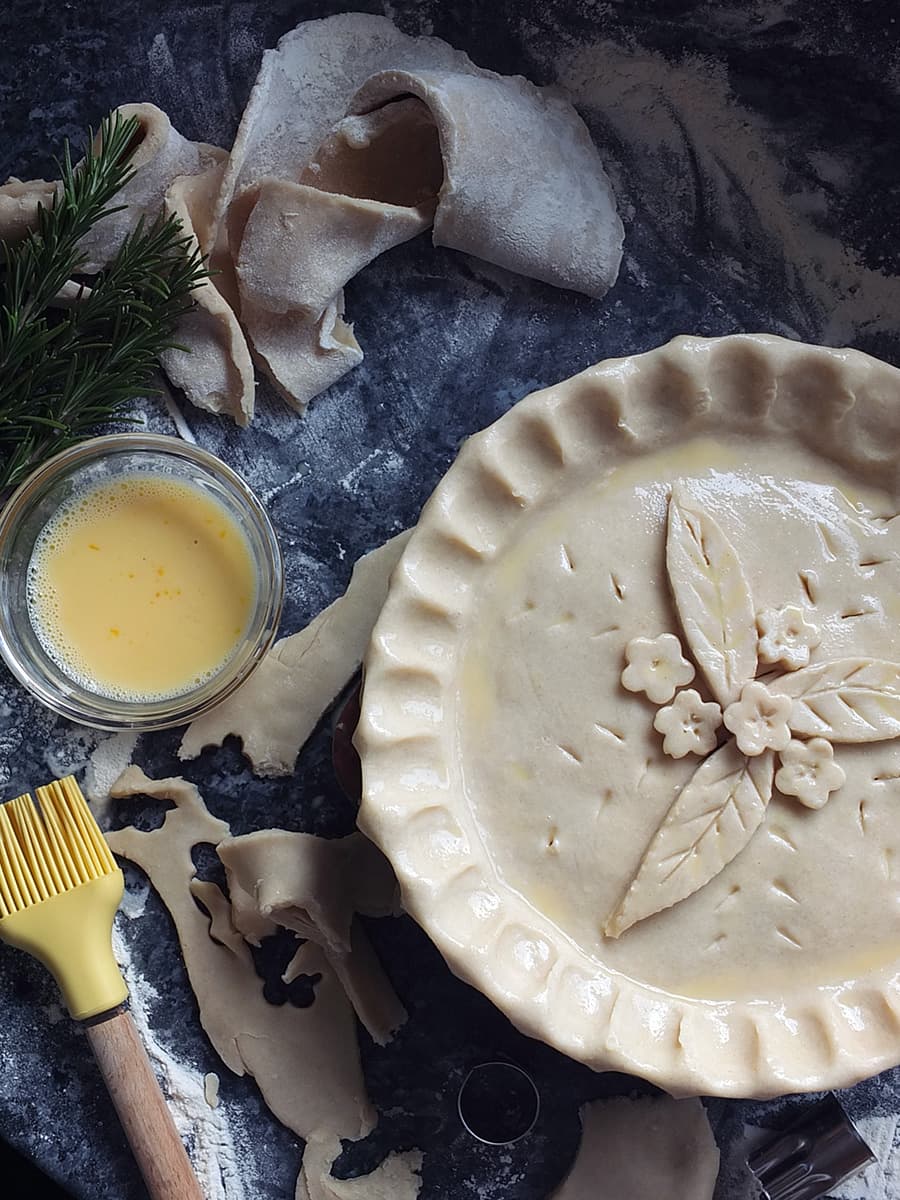 The therapeutic effects of making pie

Making pie is almost like a form of meditation for me. There’s something intensely relaxing and satisfying about turning a few simple ingredients into a soft, malleable dough, and then turning that dough into a dish that ticks off all those crispy, carby, flakey boxes.

First, the act of rubbing the fat into the flour – it’s not something you can rush. You need to take your time with it, rubbing each little square of lard into the dry ingredients until they resemble coarse breadcrumbs.

Then, the kneading. At first, it doesn’t look like much; it’s just a pile of breadcrumb-like clumps, but after a few minutes of working the dough with your hands, it turns into a soft, smooth ball of pie dough. A potential encasement for an infinite number of fillings; whatever takes your fancy. 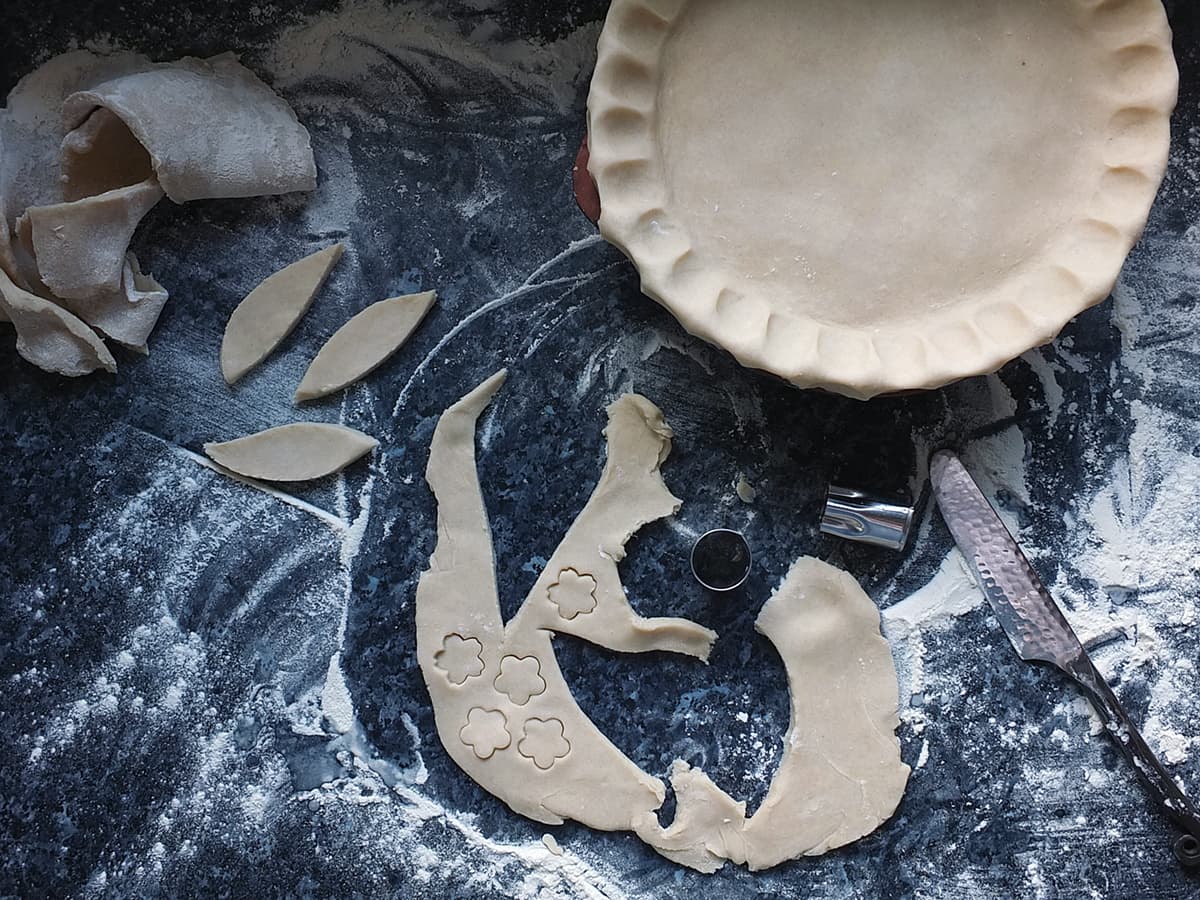 After that, after it’s chilled and ready to roll out and you’ve made your pie filling, the act of rolling and assembling the pie – it’s incredibly relaxing.

And you know what? I haven’t made pie since the week Shetland went into lockdown early (and shut the virus down in its tracks). Even then I only made it because I was being paid to. Sometimes I feel like a food mercenary. This is a funny industry. 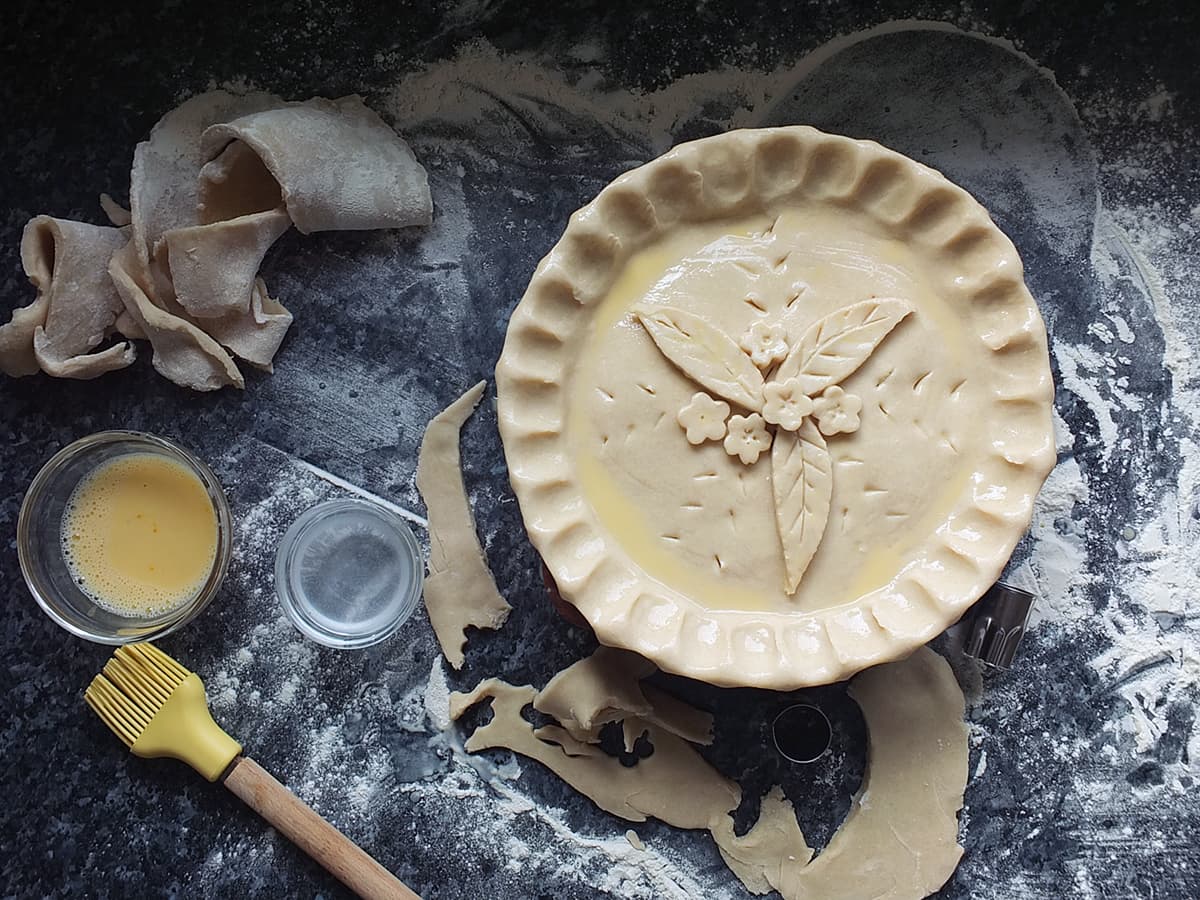 Truth be told, I’m hardly cooking a thing these days. Regular visitors to my website/social channels might have noticed this. When the lockdown restrictions were imposed I found myself unable to stop moving; I felt caged. I let this out by exercising (I can’t recommend the Beachbody on Demand app enough, honestly!) and exploring the coastline (and now the sea, now that we’re allowed to kayak) near my house.

Enough about that though… you’re here for the pie pastry! 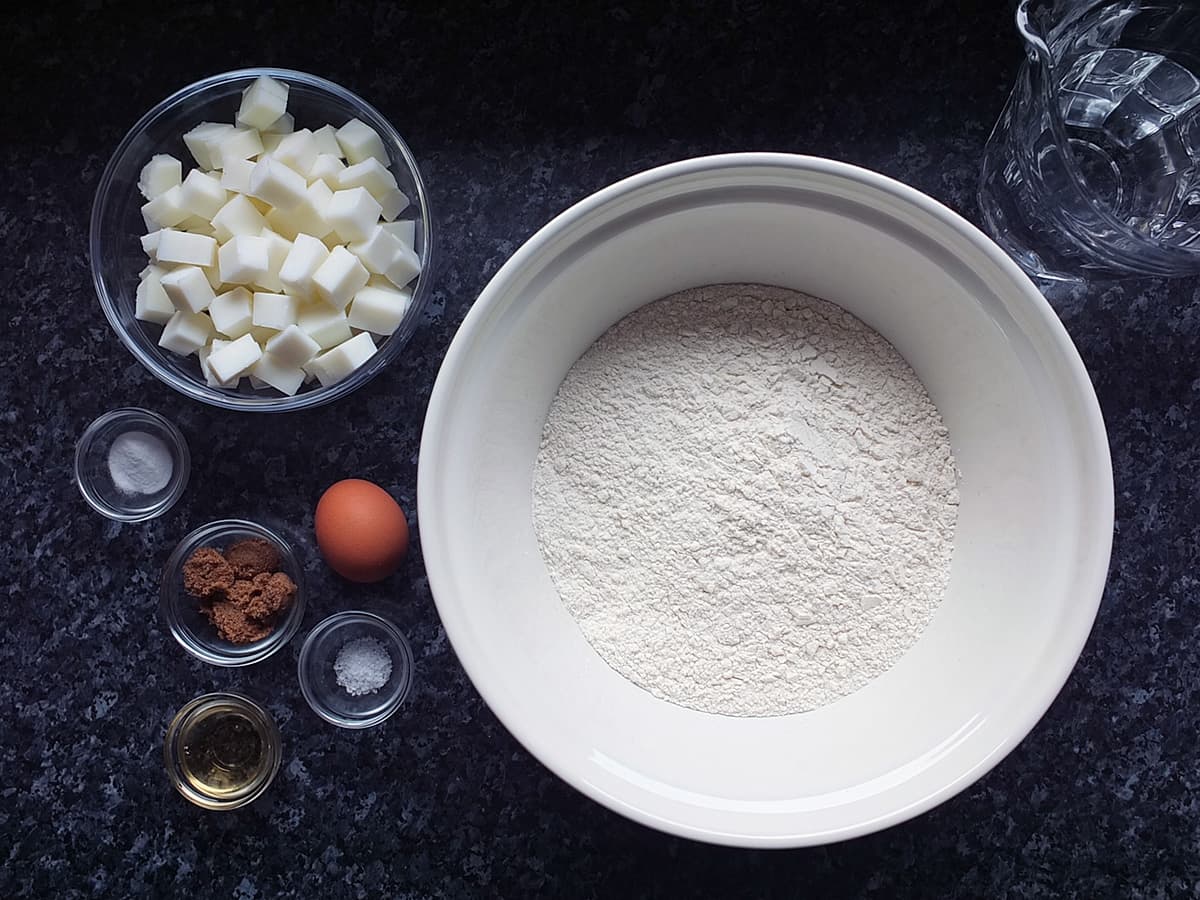 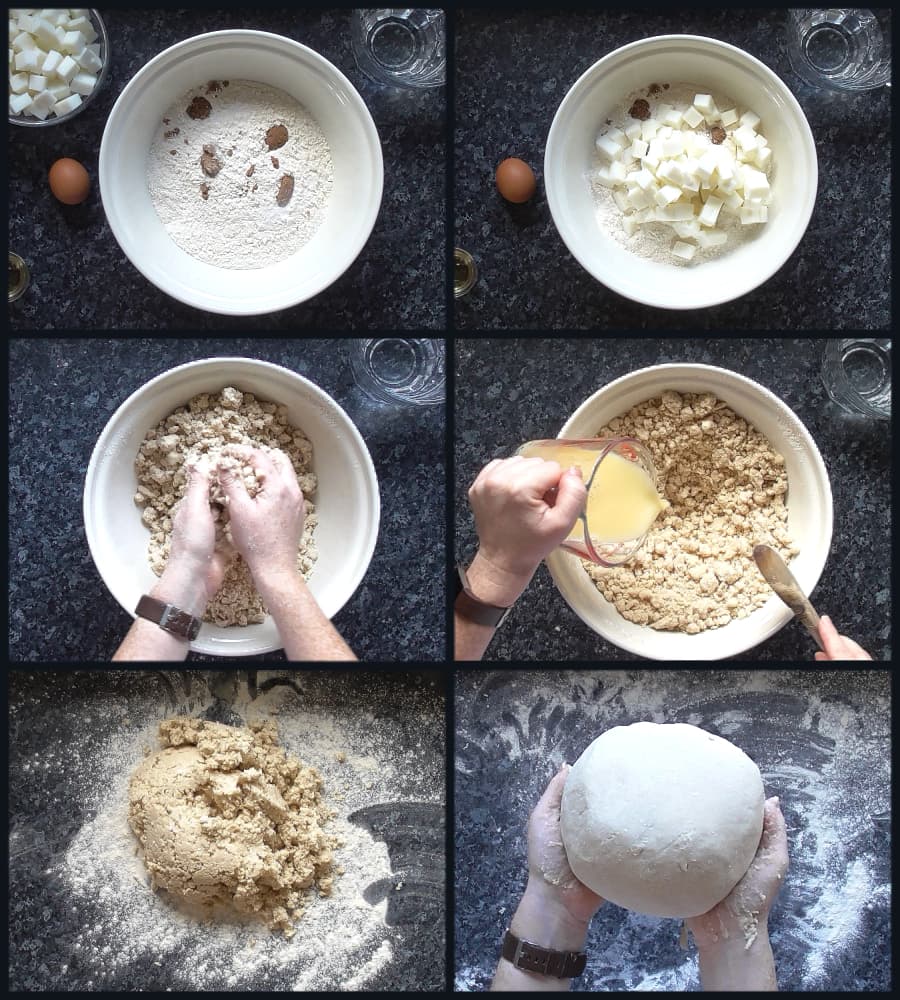 How to make a double pie crust recipe from scratch 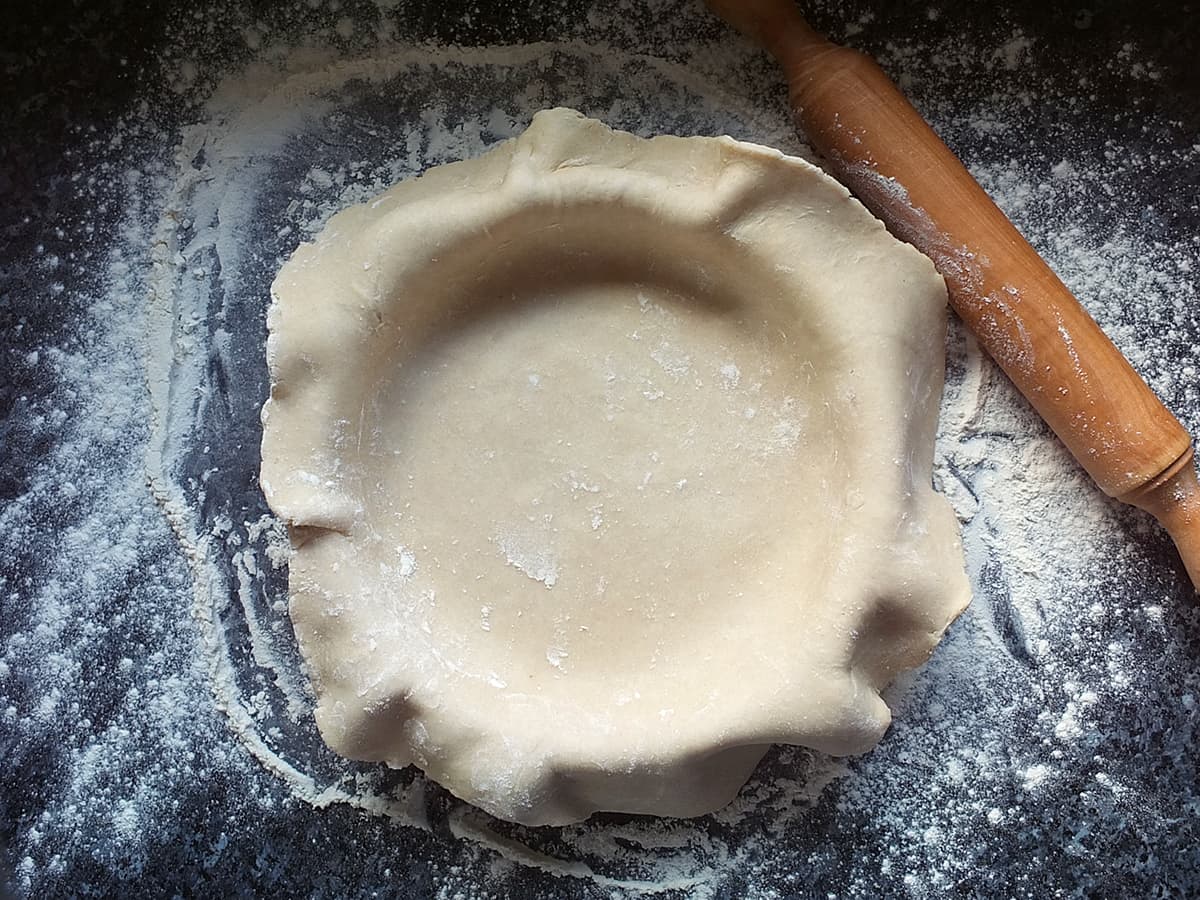 Can you freeze pie dough?

Yes! Simply wrap your flattened ball of pie dough in a freezer bag or double layer of clingfilm and pop into the freezer for up to three months. Defrost overnight in the fridge and roll it out as usual to make your pie.

How long can you freeze pie dough for?

You can freeze pie dough for up to three months. 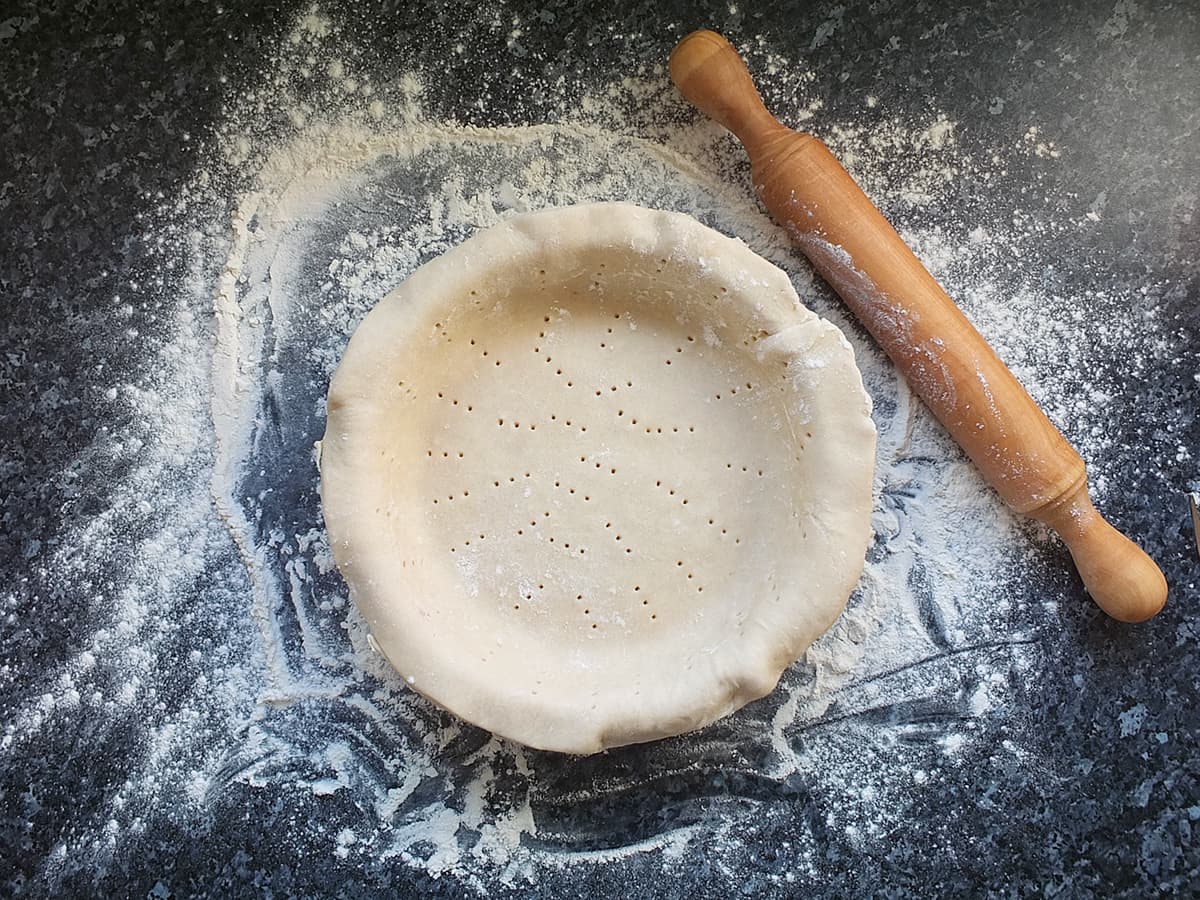 What can I make with this pie pastry recipe?

This recipe is good for both sweet and savoury pie fillings, but if you want to make a sweeter crust for a dessert, simply sprinkle the top with some demerara sugar after you’ve brushed it with the egg wash before baking.

Why does my pie crust tear when I roll it out?

Your pie crust may be too dry (ie: you added too much flour). Try adding a little bit more water and kneading the dough again gently.

You shouldn’t have a tearing problem with this recipe as the lard content keeps the dough soft and pliable. 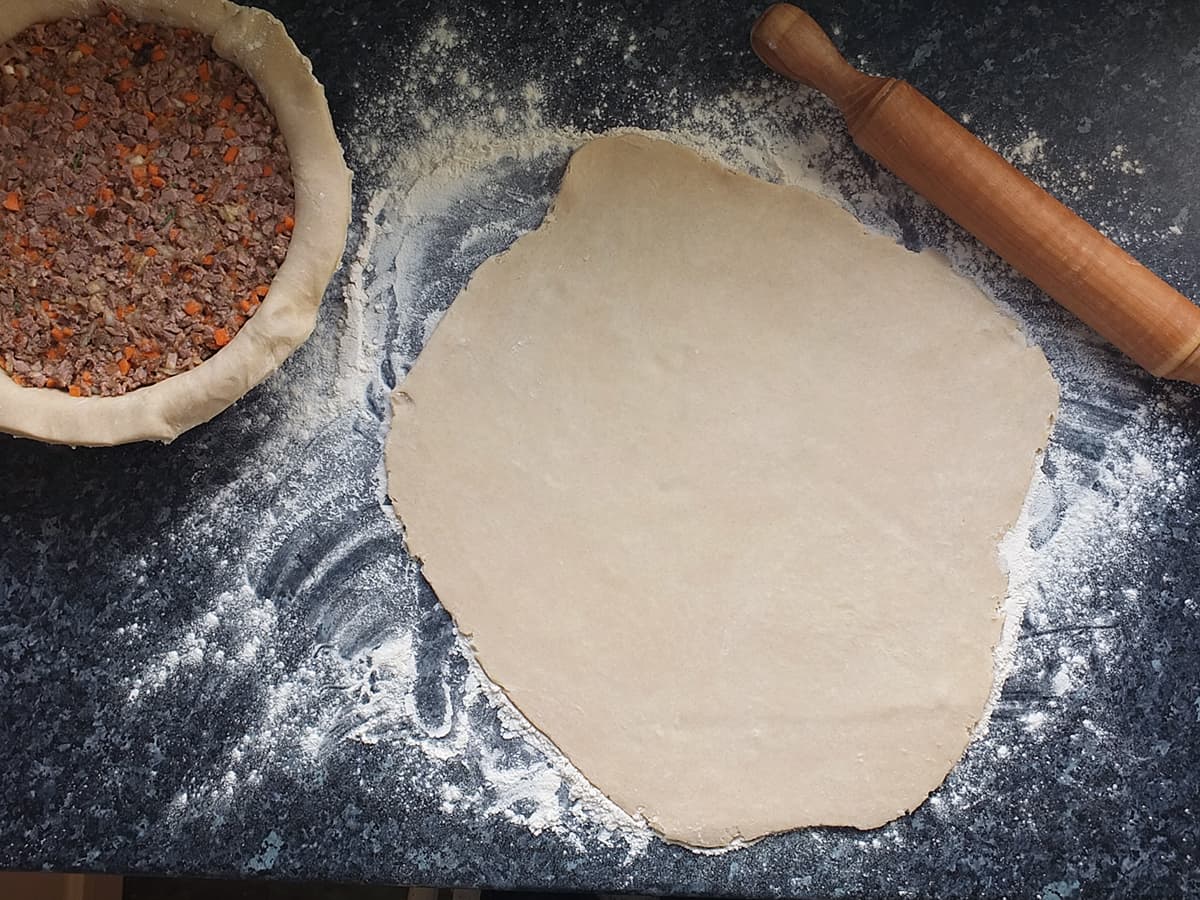 A pie crust recipe without shortening or butter

This recipe uses lard as the fat, instead of shortening or butter. If you don’t want to use lard, shortening is a good substitute, but the pastry won’t taste as nice.

Truth be told, this pie crust recipe and baked potatoes are the only two recipes I use lard in with my cooking.

Is lard or butter better for a pie crust?

Lard has 20% less saturated fat compared to butter, and it has a higher melting point which means it doesn’t soften as quickly when you handle it.

When the pie crust is baking, the little pockets of fat melt away leaving tiny air pockets that expand because of the steam created when cooking. When lard is the fat used, the resulting pastry turns into an extremely crisp, flaky crust. 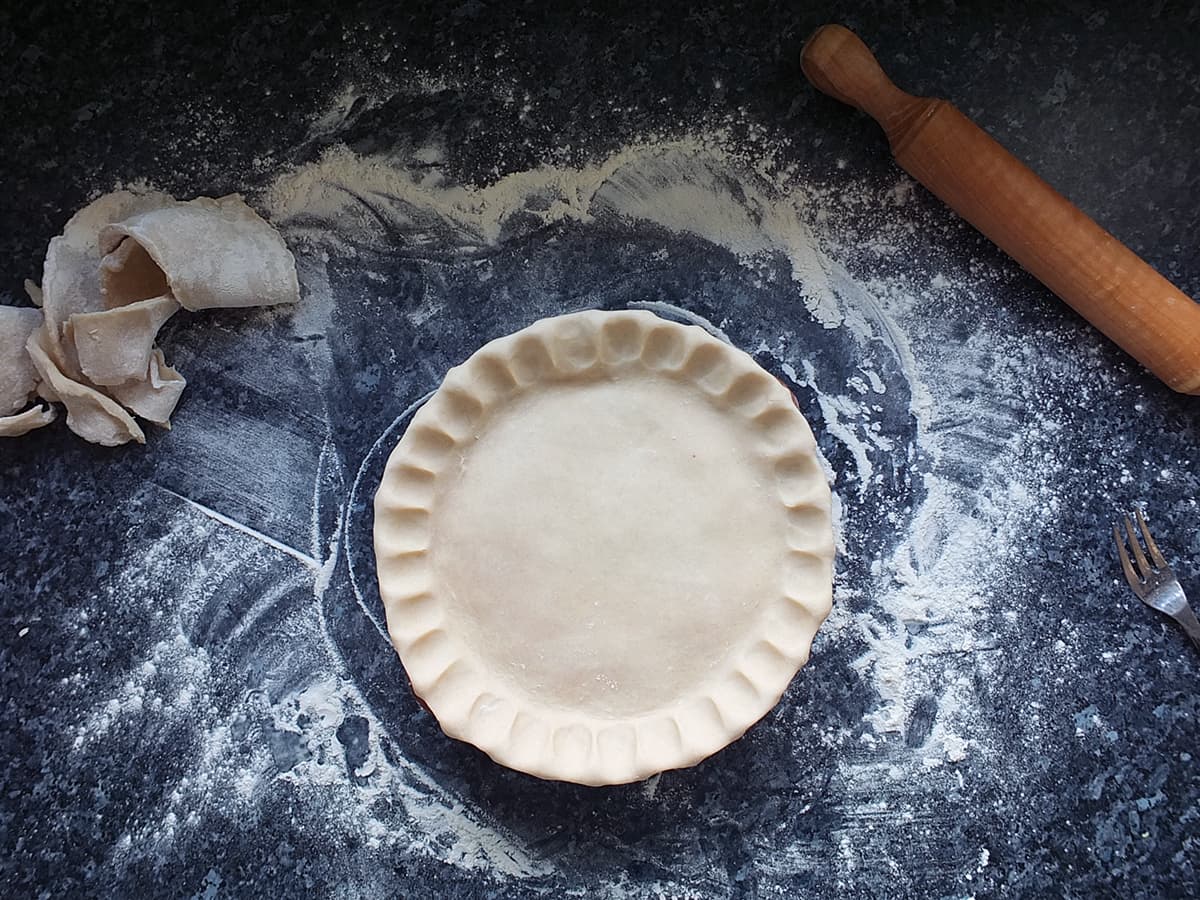 Why do you use vinegar in pie pastry?

Vinegar helps prevent the formation of gluten (a group of proteins that act as a glue, giving bread its elasticity) in the pie pastry dough which results in a flakier pastry.

How do you shape the edge of a pie crust?

Watch the video below to see how I do it.

How to assemble, crimp and decorate pie pastry

How to Assemble, Crimp and Decorate Pie Crust 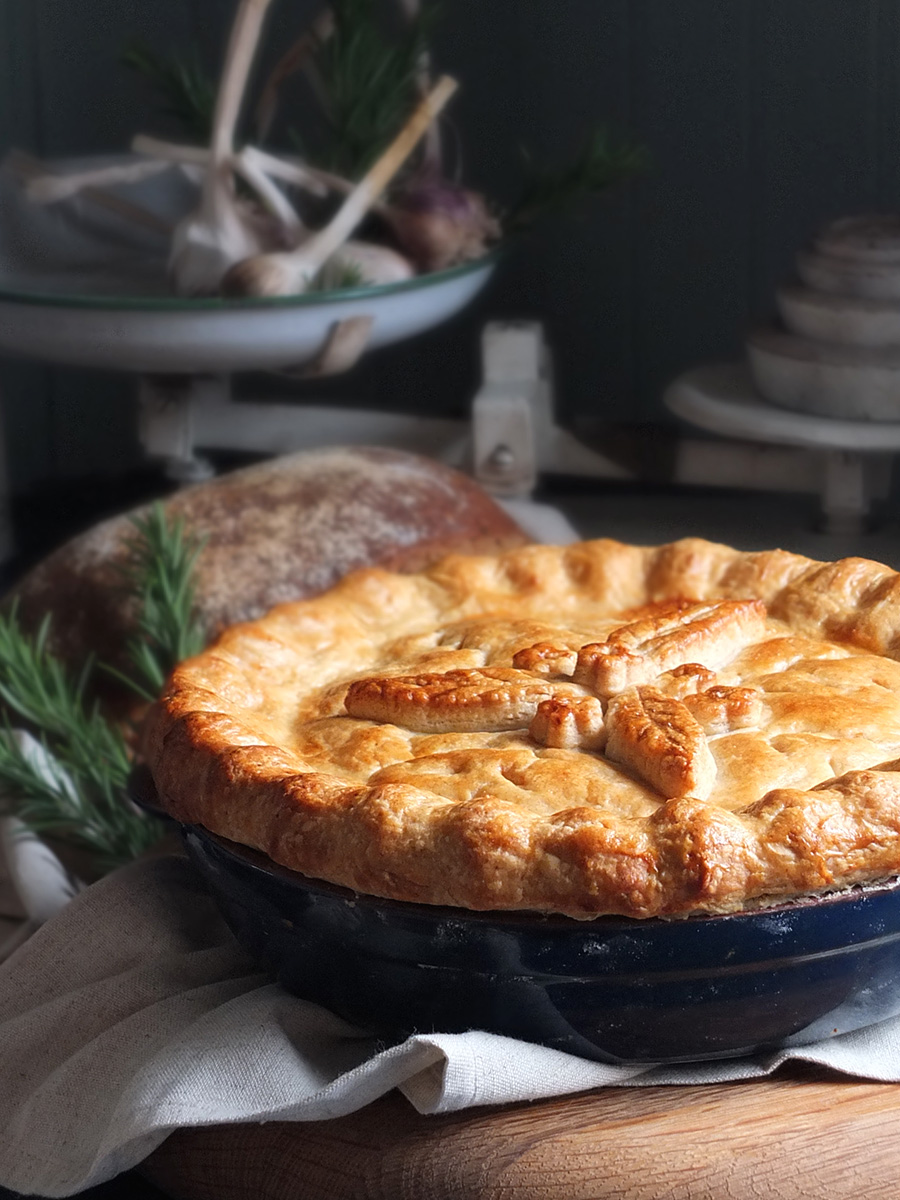 My favourite way to use this pie pastry recipe is in a leftover roast lamb or beef pie, the way my mother used to make it. Well, truthfully, she used my grandmother’s meat grinder to grind cold Sunday roast into fine bits along with a carrot, onion and leftover gravy (always Bisto), but here’s my leftover roast lamb and rosemary pie recipe, if it interests you.

I’d love to see your pie creations! If you do make my recipe, share a photo on Instagram and tag me @tangoraindrop! 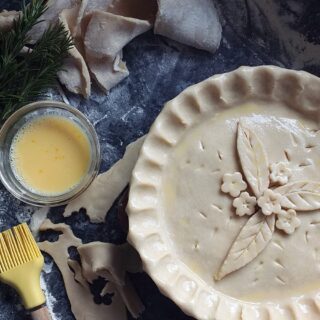 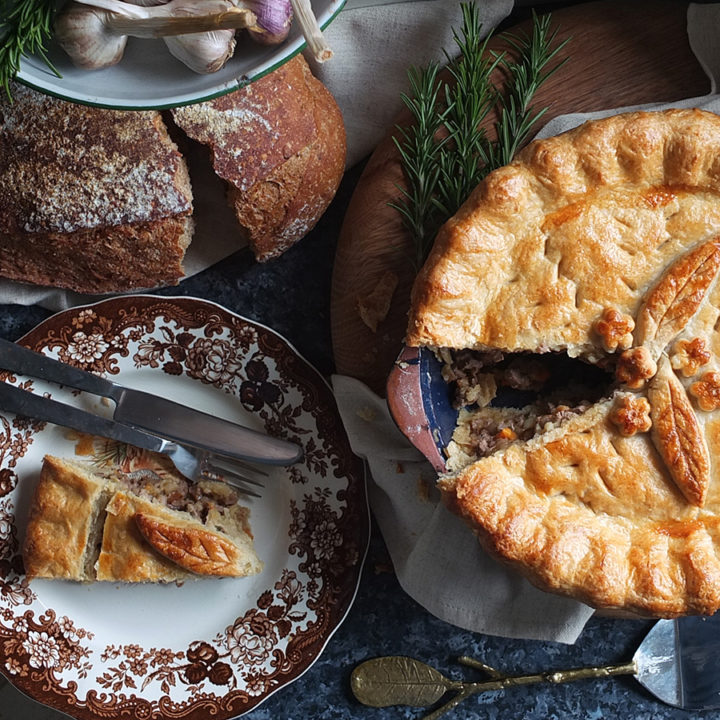 A taste of home, this roast lamb and rosemary pie is made from leftover roast lamb and gravy encased in my grandmother’s crispy, flaky perfect pastry. 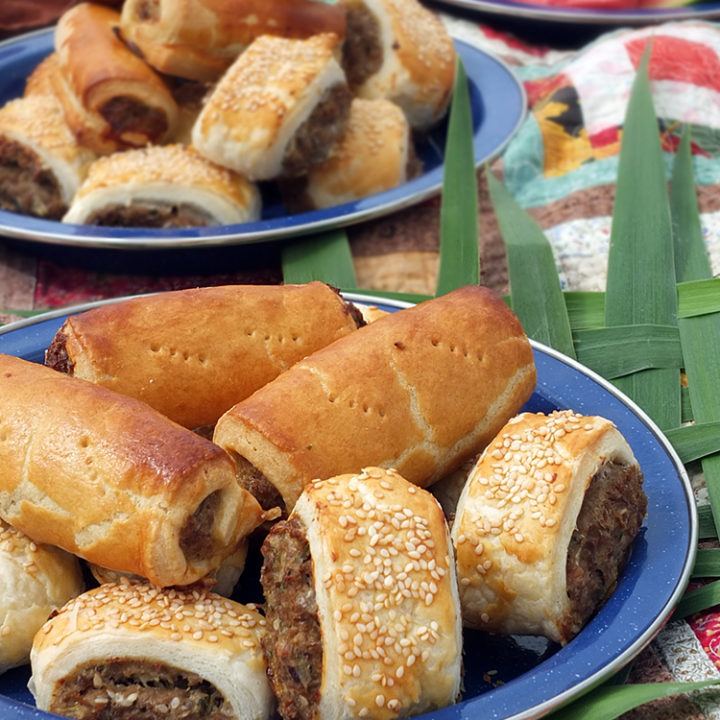 Perfect for picnics, this simple sausage roll recipe will be sure to impress children and adults alike.

This recipe post contains Amazon Associates affiliate links, which means if you click through them and make any subsequent purchase in the next 24 hours we will earn a small commission at no extra cost to you. Thank you for supporting my family through these purchases; it saves me from having to go get a real job.