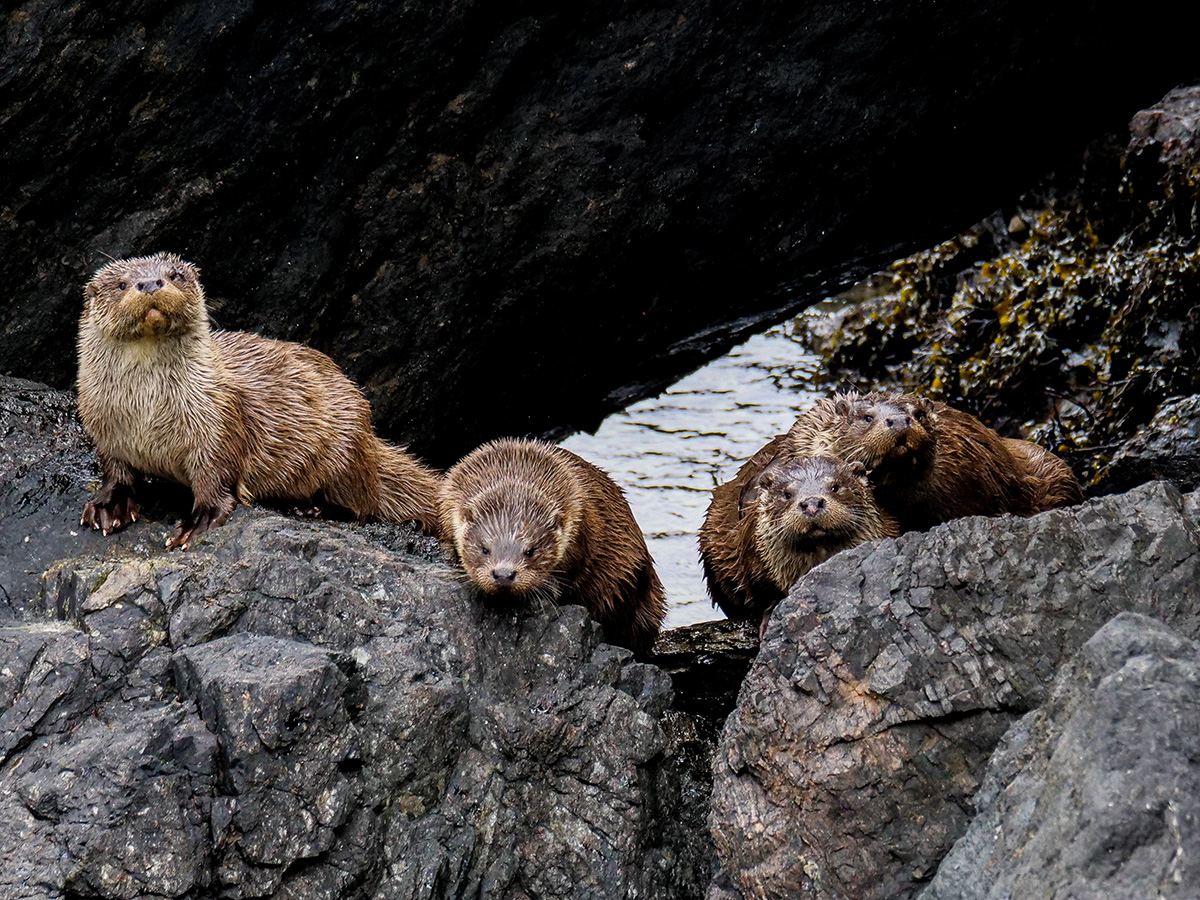 The Shetland Islands has the largest density of otters (draatsi in Shetland dialect) in Europe, possibly even the world. A family of four, a Mum and three cubs, live on the coastline in front of my house. I’ve been filming them during these last few months to help pass the time during the lockdown.

Social distancing & adapting to a change in lifestyle

As I type, it is Day 71 of our family social distancing and day 55 of the UK-wide lockdown to help slow the spread of coronavirus.

We’re all handling this lockdown situation in our own unique ways. For some, it’s business as usual, for others it’s a welcome break from the hectic lives we’d previously been leading. For others, it’s a time to play video games or binge watch Netflix series. For me it’s a time to re-evaluate life’s priorities; to contemplate the new world I wish to live in when we all come out on the other side of this dreadful time.

I’ve got some epic plans on the horizon.

In the meantime, my lockdown coping mechanism has been to focus on my fitness and to just keep moving. I always need a project or something to focus on, and during these unsettling times, I can’t seem to stay still. I stream home workouts in my living room and I walk the 1.5-mile stretch of dramatic coastline directly in front of my house.

The further towards the open sea this coastline gets, the more rocky, wild and etched by the sea it becomes. My walk takes me to a secret little geo, where I follow a sheep track down to the pebbly beach and look for tiny cowrie shells the waves have churned up onto the shore.

I’ve claimed this wild playground as my patch, a patch, I’ve discovered, I’m being permitted to share with a family of four otters – a mum and three cubs.

As much as I really shouldn’t anthropomorphise these wild animals, I’m afraid I do. I have spent more time over the last two months in the company of wild otters than I have with other adult humans. They’ve become like my wild, extended family.

At first, they were quite surprised to see me on their coastline, where they dive down into the kelp forest and feed on sea urchins, octopus, crab and a variety of fish. Now, they’re used to me being there. Sometimes they swim up to where I’m sitting or standing on the banks, do their thing and then keep going. I don’t even need to look for them any more; they often find me.

I am no wildlife photographer and gave up trying to take stills of their fast-moving antics. Instead, I began filming them, perching on the top of the banks watching them dive, play, feed and sleep below me.

Draatsi - Episode 1: What sound does an otter make?

I’ve been using this opportunity to practise my newly learned video editing skills, and I hope you like what I’ve created with this six-episode Shetland otter video series.

What sound does an otter make?

I remember the first time I heard the sound of an otter. I thought it was a rather unusual bird chirping away. It’s a cheep-cheep-cheep noise, as you can hear in the above video.

I’ve noticed that it’s usually the cubs who make this noise onshore while Mum is out hunting. Otter speak for ‘Mum, Mum, Mum, MUM!’. Then Mum will start chirping when she gets closer, letting her cub know she’s on her way.

Otters are rather noisy creatures. I’ve heard them make a range of other noises over the last two months, from a huff-like ‘hah!’ sound when they’re watching me to an exasperated old-man blowing air out sound when they obviously wish I’d just go away.

They also fight, loudly, like a bunch of screaming cats in a tangle of limbs, teeth and tails.

What do Shetland otters eat?

I’m sure there are more things, but these are the things I’ve seen (or seen the evidence of) them eat. I’ve heard they are rather partial to baby swans too, given that the pair living in the lochan near my house have never successfully reared young because of them.

You can watch an otter eat an octopus in the above video. Be warned, it’s rather gruesome viewing with the tentacle-less octopus changing colour as it’s being eaten alive. Below, an otter catches and brings a crab ashore to eat.

Where can I see Shetland otters?

There are approximately 1000 otters living on Shetland, so there’s bound to be some wherever you go on the coastline.

Otters are shy and elusive creatures, so if you really want to see them when you visit Shetland (when we’re open for business again!) you can book a tour with Richard Shucksmith, co-author of ‘Otters in Shetland: the Tale of the Draatsi’

Are otters a native species to Shetland?

The otters around Shetland are not sea otters, rather, they are freshwater European otters which were likely introduced here hundreds (or thousands) of years ago.

They have adapted to live in the sea, but their holt (their home) is usually located near a freshwater burn so they can wash the salt from the sea off.

Below, I filmed one of the otters on a lazy Sunday morning near one of these burns. It had no idea I was watching.

Where do Shetland otters sleep?

Shetland otters sleep on land either on the ground or in their holt. They’ll also snooze on a bed of seaweed when the tide is out, wrapped up in a big otter ball with the rest of their family. The video below was the first time I filmed all four of the otter family together. I was just a few metres away from them but they were not concerned at all while they had their afternoon nap.

Honestly, I have a good 10 minutes video footage of them sleeping… not sure how that will ever come in useful!

Below, in the last of six otter videos, I was sitting minding my own business on the secret cowrie beach and the otter came ashore just a few feet away from me, had a look around and then left.

Witnessing the changing of the seasons

Since we went into lockdown on the 23rd of March, and I took up my daily coastal walk, I’ve been very aware of any subtle changes in the landscape.

Every day I listen to the drumming of the snipe, the squeaky-dog-toy noise of the oyster-catches (who are nesting near my secret cowrie beach and complain every time I go past), and the call of the red grouse.

Lastly, I will leave you with this little treat I’d never seen before! A whitrit, or Shetland stoat. Stoats are distance cousins of otters. I spied this one jumping across the sandy beach and just managed to get my camera out before it disappeared.

Excuse the death metal, but it seemed appropriate.

With thanks to Nick McCaffrey of Southspear Media & Surveys for the photograph of all four of my otter friends. My photography skills were not up to scratch and he managed to capture them beautifully.