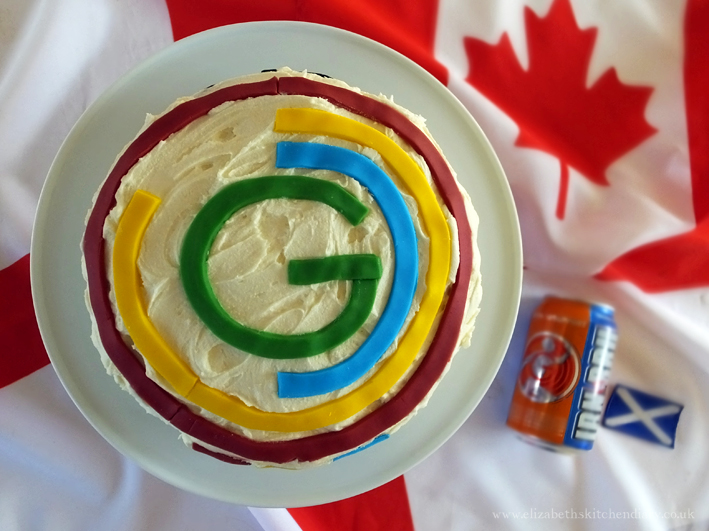 I may live as far away from Glasgow as I possibly can and still be considered to living in Scotland, but the Commonwealth Games have touched our rural island village in the middle of the north sea.

On the 1st of July the Queen’s Baton Relay came to our village. The buzz on the day was immense, aided by the fact the sun shone brightly on us all and it was the warmest day of the year so far. It was glorious!

The local village hall was serving hot dogs, home bakes and drinks, so our youngest and I headed there after nursery for a spot of lunch.

While we were sitting in the lounge area enjoying our snacks, we admired the artwork on the walls done by the local school children. There were painted paper flags of all the Commonwealth countries and a large fabric Commonwealth Games 2014 flag on the wall just across the wall from where I was sitting. 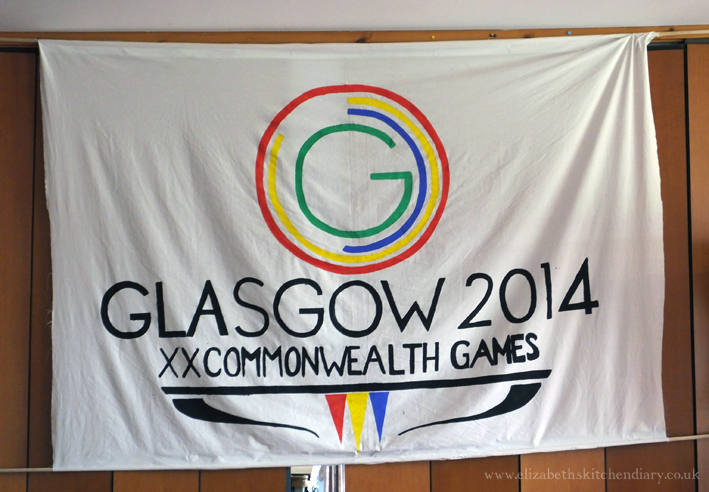 As I looked at that flag an idea formed. I had a 5 colour multi-pack of Renshaw Decor-ice ready to roll icing in primary colours in my cupboard. I’d filled out one of their surveys awhile back and was sent this packet of icing as a thank you. The colours in the packet were the same colours on this flag. I was going to make a cake using this flag as inspiration!

The plan for the day was that the baton would arrive at 1:05 pm sharp by the village shop, make its way through the village to the school football pitch and then down to Britain’s most northerly lifeboat station. From there the lifeboat, Charlies Lidbury, would transport the baton, its bearer and attendants, to the most northerly destination of the baton’s travels up at Brae, up the voe.

There was a relief lifeboat in the village as our own was due to head to Inverness for upgrading, so the second lifeboat was to carry us media folk. I am the volunteer Press Officer at this station, so I went along with my video camera. 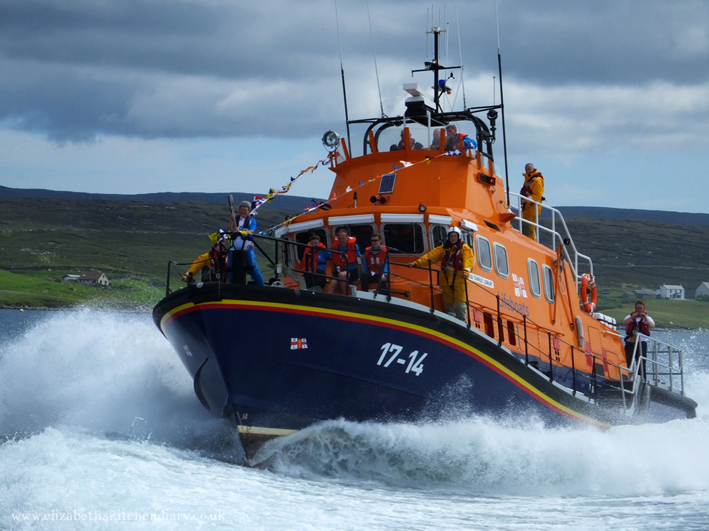 We had a fantastic journey across the voe, the sun shining down, the salt sea spray on our faces, the wind in our hair. I can’t emphasise how much I enjoy being out on the water.

No sooner had we arrived in Brae and the baton attendants were disembarking did the lifeboat pagers go off! A yacht following behind the lifeboats had grounded itself on a sandbank just a few minutes away. Everything was caught on video, so check out all the action below.

It was an absolutely fantastic day and I was glad to be a part of it.

This is not the only time I’ve been involved in the Commonwealth Games 2014 celebrations somehow. Several months ago I was contacted by photographer Arpita Shah. She’d been commissioned to take a series of family portraits of families living in Scotland with cultural roots in other Commonwealth countries. I’m an ex-pat Canadian and Arpita found me through my blog.

Several weeks later she arrived in Shetland to photograph us all in our home as well as a family just a few minutes down the road from us where the husband comes from Tanzania. 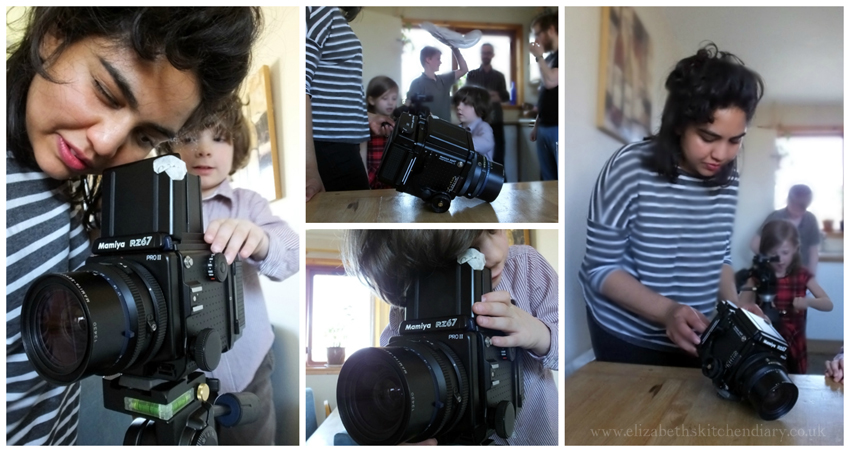 A selection of the family portraits Arpita took (including ours) can be seen in the Trongate 103 gallery in Glasgow until the 24th of August and they also form part of Street Level Photoworks city-wide project: Commonwealth Family Album. These images are on display on outdoor walls around the city, including Glasgow Green until August 3rd.

Street Level Photoworks describes the project as celebrating Scotland’s links to the Commonwealth, visually representing how migration between these countries has shaped the national and cultural identity of contemporary Scotland.

Well, I’ve seen our portrait and I must say the years have not been kind. I am clearly not ageing well and that will be the last time a camera will be pointed in my direction. I’ve always been camera shy, but if you see my image you will understand why! I don’t really look like that, do I!? <cringe>

Nonetheless, it’s an honour to be part of the project and it was lovely meeting the fantastic Arpita and her partner.

So, moving on to the cake!

My Commonwealth Games 2014 Celebration Cake consists of a basic vanilla sponge sandwiched together with a generous quantity of butter frosting flavoured with .. Irn Bru! Irn Bru is Scotland’s most famous fizzy drink and it was the first thing that sprang to mind when I was thinking about how to make the cake Scottish (haggis just wouldn’t do!). The bright orange beverage gives the frosting a mild Irn Bru flavour, complimenting the vanilla sponge well.

Inspired by the children’s Commonwealth Games flag above I decorated the cake with 1 cm strips of coloured ready to roll icing, pressing them into the butter frosting. It’s not a perfect looking cake, but it tastes fantastic and it’s got a story behind it, so I am sharing it with you all.

We stayed up late watching the Opening Ceremony last night – I thoroughly enjoyed every cheesy minute of it and was glad Shetland got a wee mention. We watched the baton arrive in Glasgow on the water-plane and after I explained to DD (who stayed up late to watch the opening ceremony with me) that it was the same baton that was in our village she quietly confessed: “Mum when the baton was here I got to touch it.” <shy grin>

Did you watch the opening ceremony? What did you think? 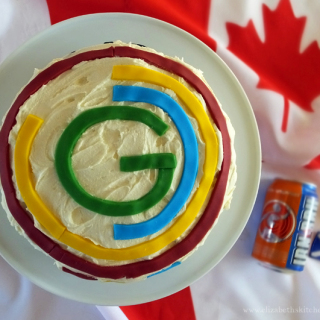 For the Vanilla Sponge

For the Irn Bru Butter Icing