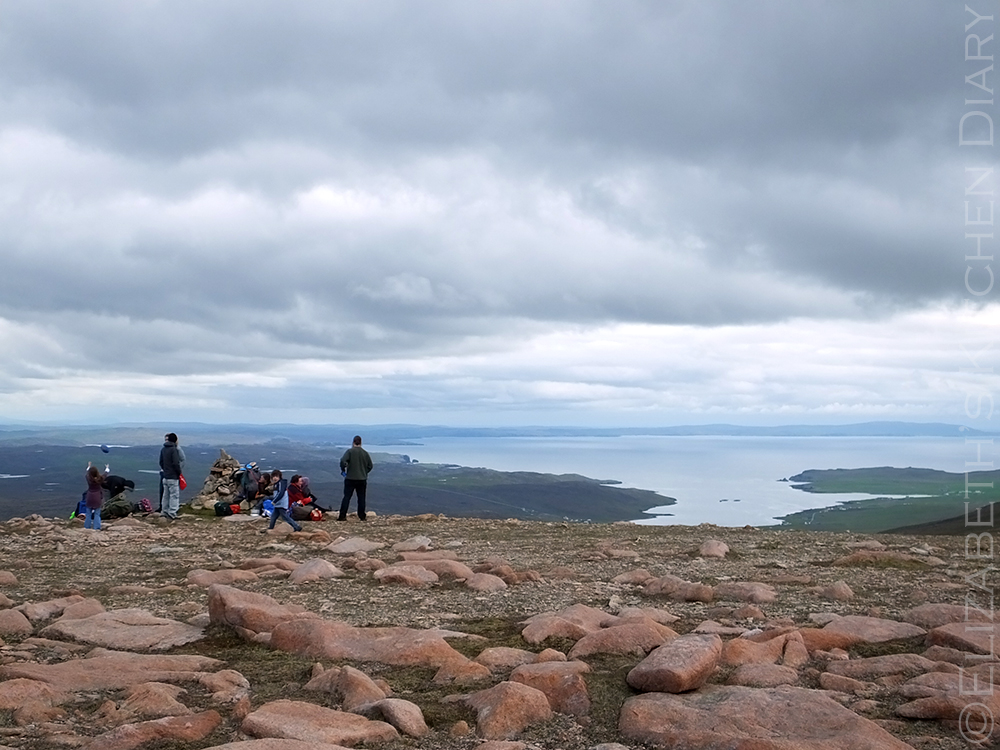 Sometimes I have good ideas.

I’m not sure where on the spectrum of good-bad ideas this camping trip idea lies – somewhere in between, perhaps?

At 450 metres, Ronas Hill is Shetland’s highest summit. Ronas hill, Norse – rön, meaning stony ground or scree, is a granite pluton (the remains of a magma chamber) similar to that found over at Eshaness. It has a subarctic climate and is a key locality for the study of periglacial activity in Scotland. There’s a neolithic chambered cairn at the top you can crawl into. The views, on a fine day, I hear, are spectacular – you can see all the way north up to Unst, and as far south as Fair Isle. I’ve lived on these islands for 16.5 years now and I haven’t yet reached that summit.

That wasn’t for lack of trying this past weekend!

This weekend saw the summer solstice, or the ‘simmer dim’ – the longest day in the UK. Here in Shetland that means it doesn’t get dark – we’ve got a whopping 18 hours, 55 minutes and 38 seconds of daylight to play in. The sun just dips below the horizon for a few hours before reappearing. The sunset/sunrise can be phenomenal.

That is, if you’re not camping in a cloud.

Seeing the sunset and sunrise from Ronas Hill has been on my bucket list for years. This year I added it to my 40 Things to Do Before I Turn 40 list. The weather was supposed to be reasonably ok (in Shetland terms this means not bucketing it down in a howling gale), so plans were made.

Somehow I managed to convince other people to join me on this mad adventure.

At 5 pm on Saturday 21st June 2015, after I’d marked the car park as a waypoint on my GPS, nine souls set off from the top of Collafirth Hill – a nearby hill with a convenient access road to the top. Our youngest adventurer was only 19 months old. There were three peaks to reach – Roga Field, Mid Field and Ronas Hill. 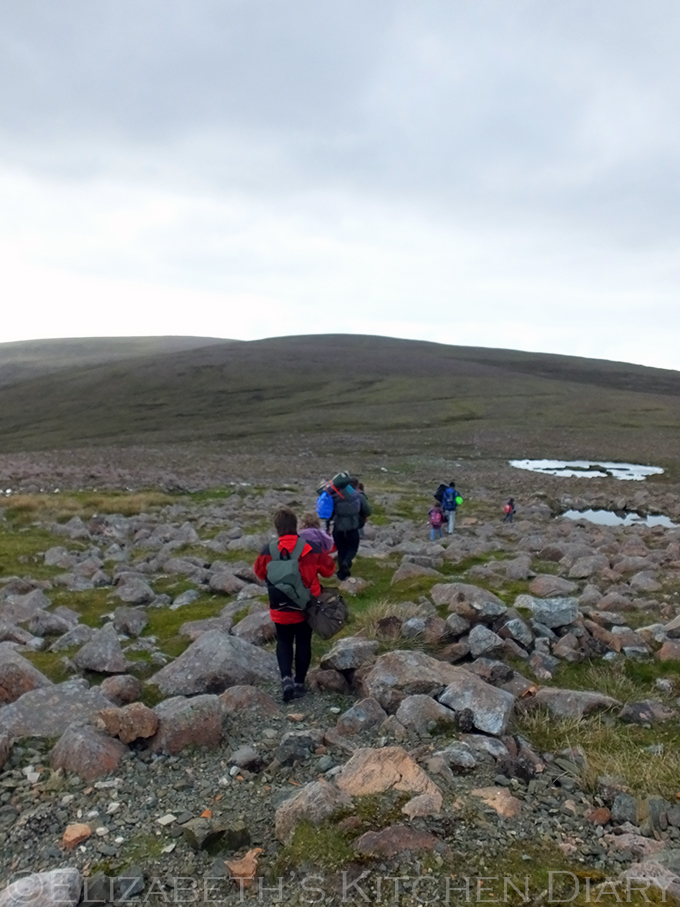 The terrain here is like nothing I have ever experienced before. It’s almost lunar. There are strange eroded, windswept terraces, sand dunes like beaches in the middle of flat, boggy areas and areas covered in granite boulders. Large pink feldspar crystals can be seen in the rocks and although I had packed my little pocket lens I never had the chance for closer inspection. 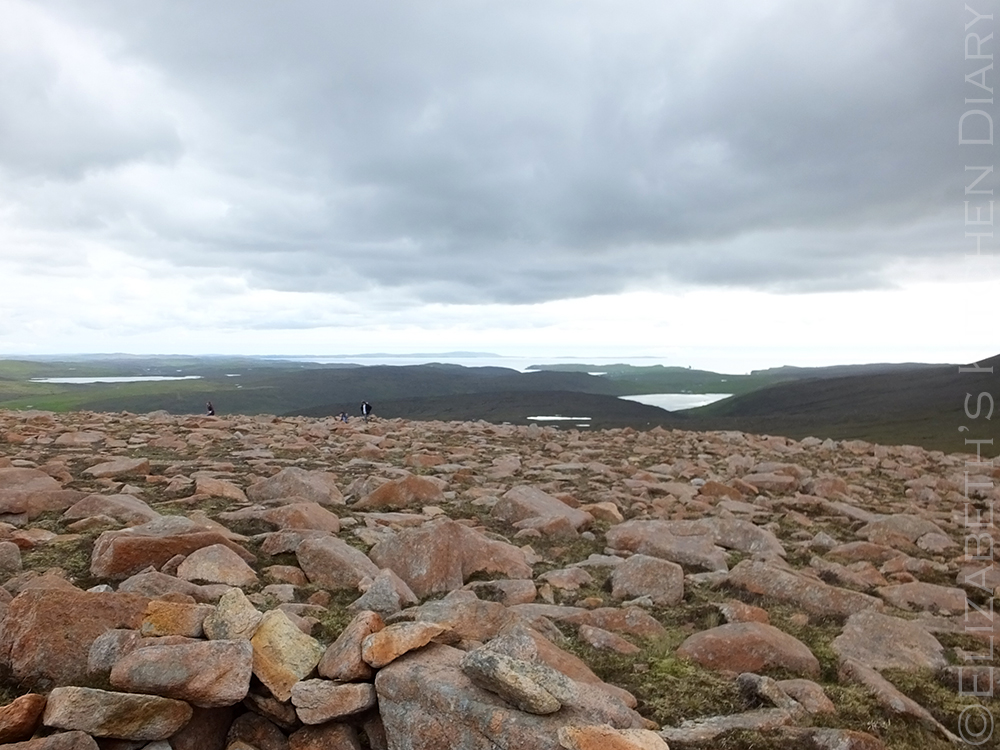 The photo above shows a granite blockfield – a field of frost shattered and wind rounded granite boulders. Pretty awesome, no? (Edit: You know, I’ve just realized that it’s statements like these that might explain why I’ve never been invited out on a birthday bus, ever.)

It was here, from our vantage point at Roga Field (294 m), that we could see our 10th companion arrive, fashionably late, at Collafirth hill. She’d stopped at Frankie’s Fish & Chips on the way up north! I can understand why, considering they’re the best fish & chip shop in the UK. The rest of the troupe went ahead while I sat and waited for my friend.

While waiting I had a look around me. It might look like a barren landscape, but there were a remarkable number of plants growing, including fir club moss and the trailing azalea (aka mountain azalea) pictured below. This is the only place in Shetland this plant can be found, but it also grows on the summits of mountains in Scotland. 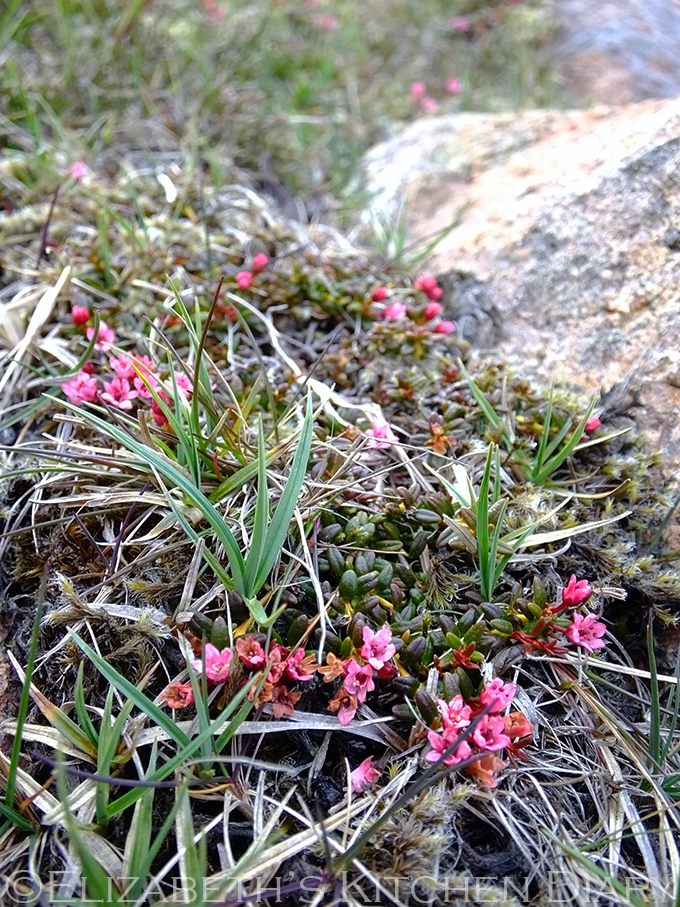 The next peak… Mid Field (388 m)! There’s a cairn at the top here too. We stopped for a wee break and to rethink our original plans. By this time all of the adults were getting rather exhausted having to carry so much gear up the hills. There’s no water or fuel up there, so we had to bring everything we needed on our backs. 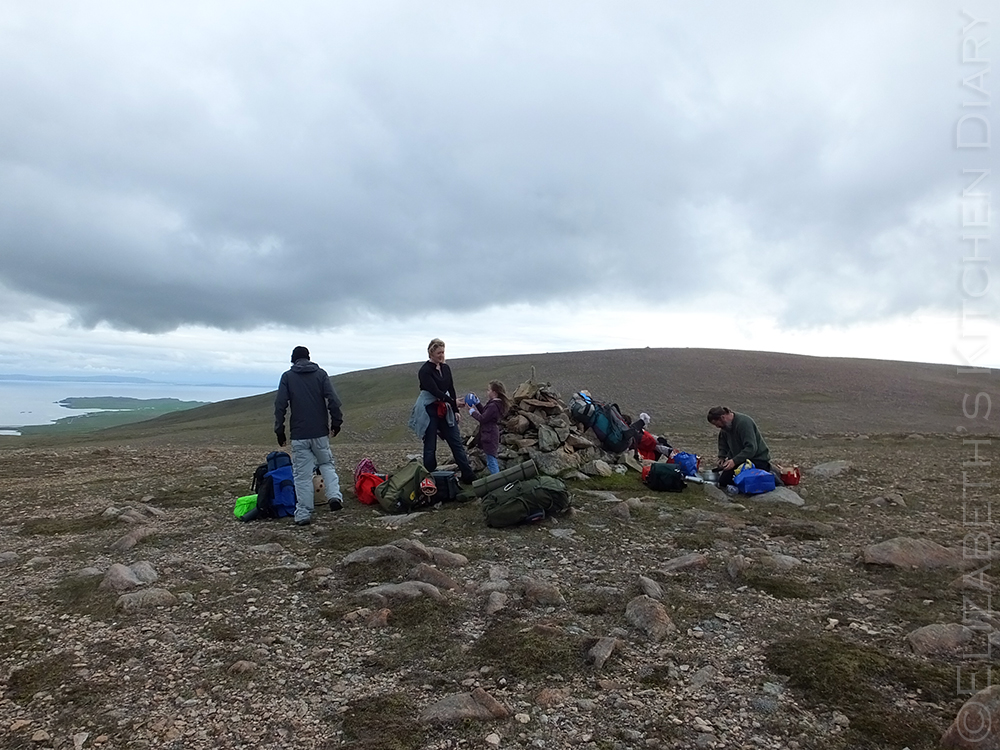 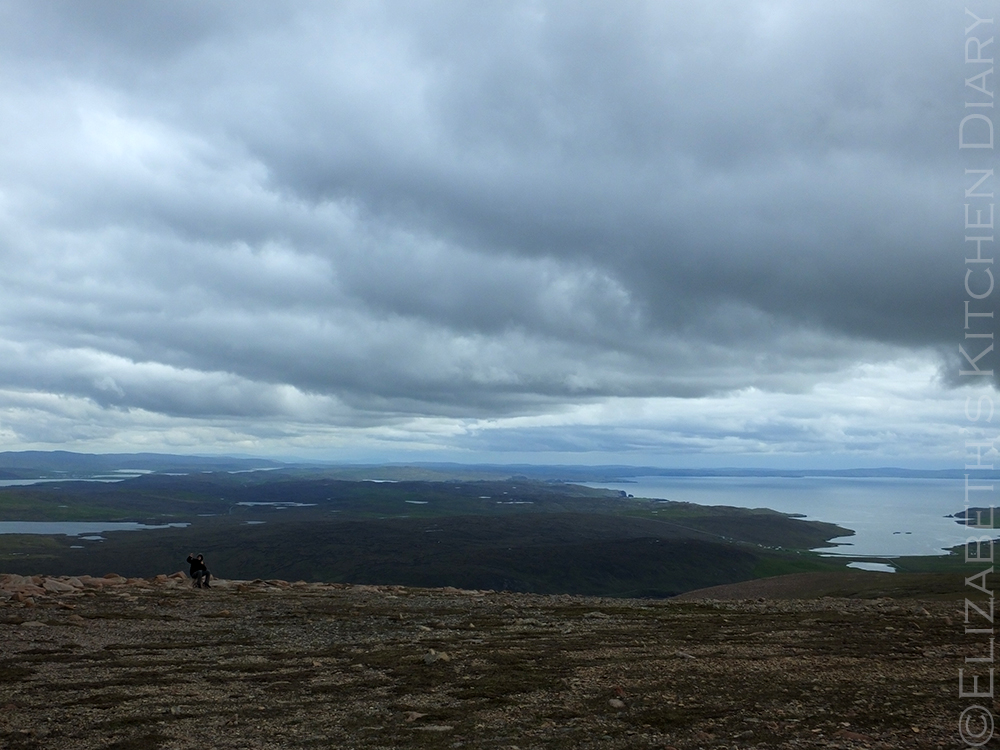 We decided, given the wind direction, that we’d camp on the northern side of this hill, rather than spending another hour or more hiking to reach the summit of Ronas Hill. This walk doesn’t normally take so long without heavy backpacks and small children, but by this time we were all ready to stop.

My friend and I volunteered to head back to the car and fetch the charcoal and Nordic fire log for our bonfire while the men set up the campsite.

It took us 40 minutes to get back to the car, and a lot longer to get back to the campsite. I didn’t think to set the GPS waypoint of the campsite before we set off, or even bring my GPS with me – I just dumped my bag and left. However, I was given a short wave radio by one of the men (Angus) in our group, and I am glad we had it otherwise my friend and I might still be wandering the hills searching for the campsite!

Over and over again I was so sure our campsite would be over the next ridge, and it wasn’t. Everything looked the same. I tried radioing back to camp, but there was no answer. I had the sudden wave of embarrassment that my own lifeboat crew and the land crew from the coastguard would be called out to rescue us.

<silence> We walked on a few hundred metres.

“Yes, Elizabeth, we hear you.”

“Um, Angus… can you get the kids to scream so we can find you?”

<screaming in the distance>

We walked on a few hundred feet again, and there, up on the ridge, appeared my teenage son and Angus to the rescue. We were only about five minutes away from camp, but we weren’t at the right elevation so we very likely could have kept going around the hill. I couldn’t believe how easy it was to get lost! I’ll never read articles like this again and think to myself how silly the walker was. Everything looks the same up there!

We made it back to camp and heartily ate our dinner of chili and rice. The wine was cold, the view was superb, but, as you can see in the photo above (click it to view full size) the mist was rolling in and it was getting late. A cloud was preparing to make itself comfy on the top of the hill for the night. That last little bit of sunset you can see was all we saw of the Simmer Dim sunset besides a tiny sliver when the clouds broke at about half past midnight.

A bottle of Orkney white wine, made with elderberries & gooseberries, was opened and taste tested (a rather different flavour when you’re accustomed to regular white grape wines, but not wholly unpleasant!), and a fire was lit, much to the delight of the children. I brought marshmallows and our companions had brought wooden skewers – so toasting marshmallows was on the books, as was a touch of s’more making! 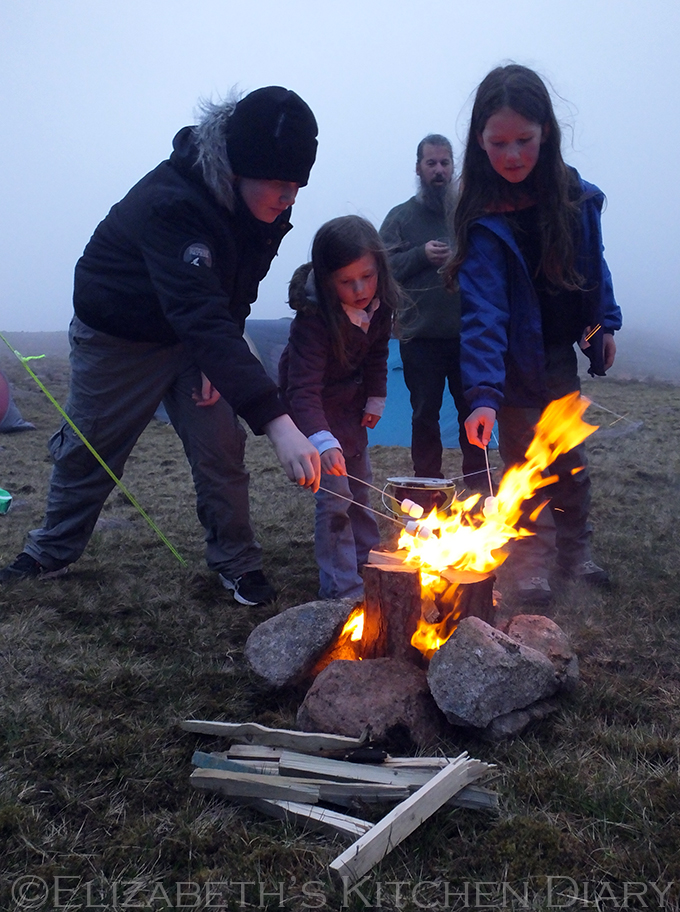 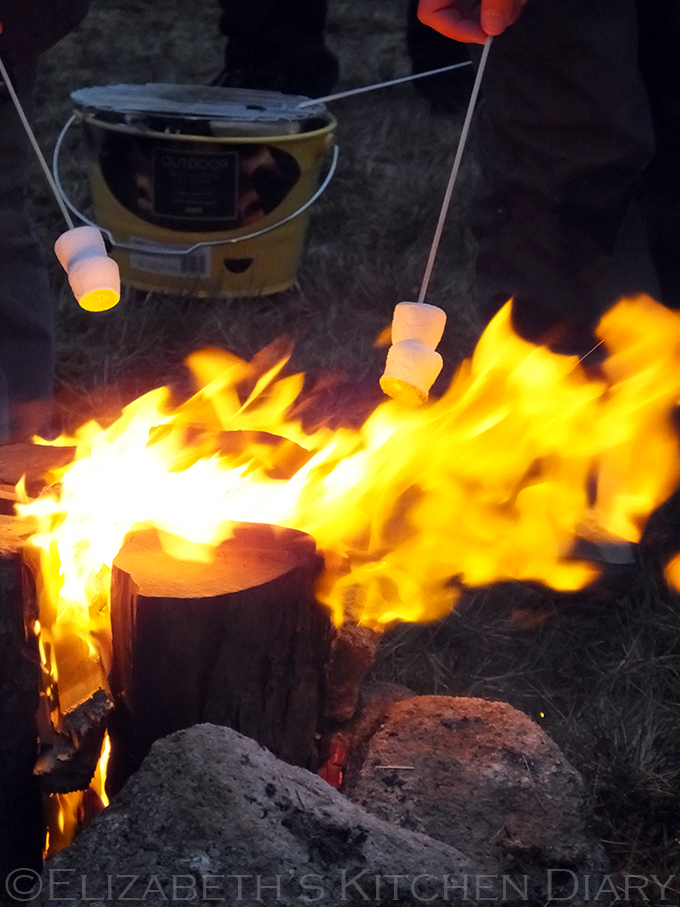 The lifesaver of the evening was Angus’ clever lean-to, built with a tarpaulin and poles. This kept the wind off us as we sat on camping mats, although the smoke from the fire caused those of us not wearing contact lenses to stream tears from our eyes for the whole evening!

Come midnight we opened a bottle of sparkling white wine and toasted the arrival of summer, from the middle of a cloud! 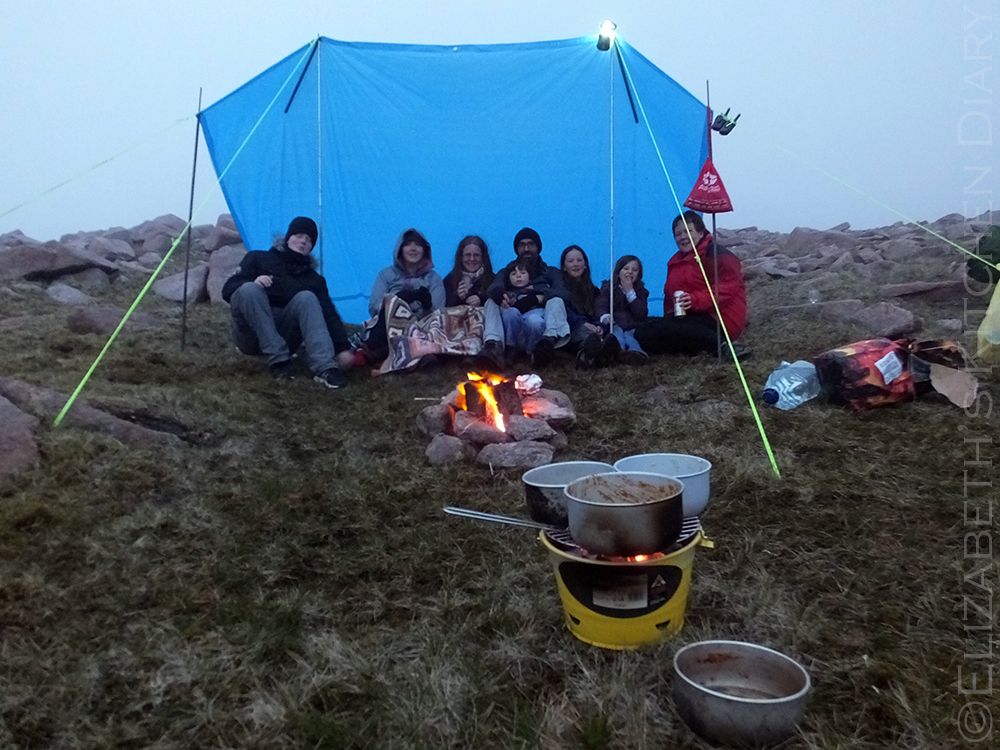 I really enjoyed this part of the evening. Good company, good wine, and a, er… cloudy view! But still, it was an experience.

What I didn’t enjoy was trying to sleep.

I have never been so cold in my life!

While I was I discovered that we only had four sleeping bags. I thought we had five, but no, we only had four. I rang my friend who said she would try and borrow an extra one for me, so in the meantime I packed my onesie and a cosy blanket.

Never, ever go camping in a subarctic environment without your own sleeping bag!

It rained too. It rained and our tent was pitched on a slope so that the inner and outer layer were touching. Water dripped onto me all night. I was cold, I was wet, and I was wishing I had someone to cuddle up to to help keep me warm.

We live and we learn, don’t we. I tell you, I’m going to buy myself the best gosh-darn sleeping bag money can buy! 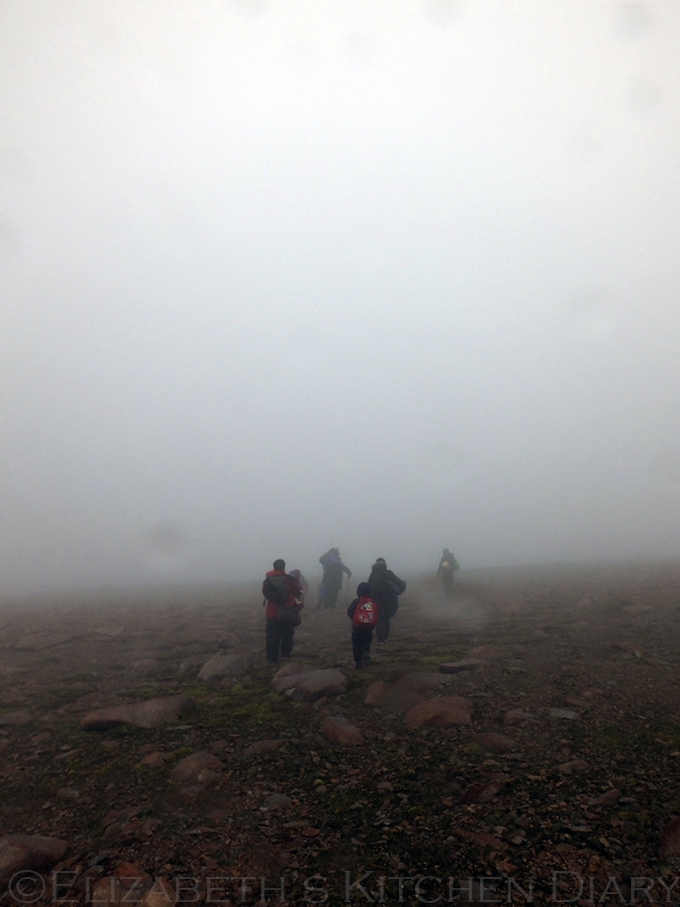 The morning was drizzly and cold (yay for lightweight waterproof outer layers!). I barely had the strength in me, even after a cup of cappuccino, to make the kids porridge for breakfast. The camping stove flame went out three times without me realizing, so cooking the porridge took an age, but I got there eventually.

The men dissembled the campsite and we headed back down the hills with the assistance of my GPS. We were walking through a cloud. Without the GPS we’d have had no idea where we were going through this lunar landscape.

I kept apologizing to everyone for my bad idea. We were all cold, wet, and carrying heavy loads. Surely there were more practical, sheltered, near-a-car-so-we-don’t-have-to-carry-everything-so-far locations to camp, but I was firmly but kindly instructed that I was to leave this experience viewing it as a positive. I learned loads, so it’s a good thing.

I learned:
1. Never go camping without your own sleeping bag.
2. Short wave radios don’t work if there is a hill in between you and the other radio. Climb a ridge and try again.
3. If I have gotten* myself and my friend lost with my poor sense of direction, I have the ability to use the resources on hand to get us out of said pickle.
4. Kids can have fun absolutely everywhere as long as there are marshmallows.
5. Walking up to Mid Field, twice (while getting lost once) = 22,250 Fitbit steps (nearly 10 miles).
6. I learned loads about Ronas Hill geology, flora and fauna.

*I grew up in Cape Breton, Canada. This is a real word there.

Thank you, friends, for coming along with me on my wacky adventure. We didn’t make it to the summit of Ronas Hill this time, but it was certainly an adventure trying! 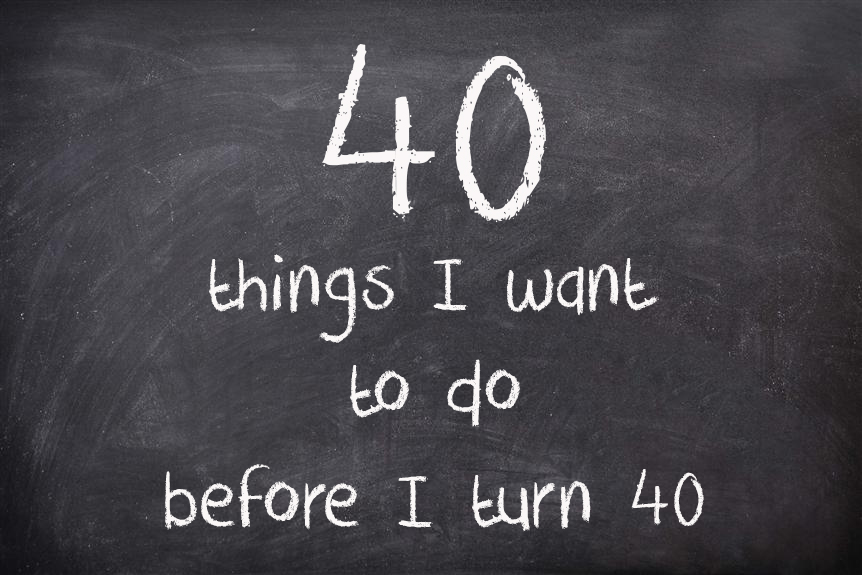 What do you think? Should I cross #12 off my list, or should I try again next year?

For comparison, this is what the simmer dim sunset has looked like in the past. This photo was taken at midnight on June 21st 2012. It’s a photo of the lifeboat that didn’t have to come and rescue us. Yet.