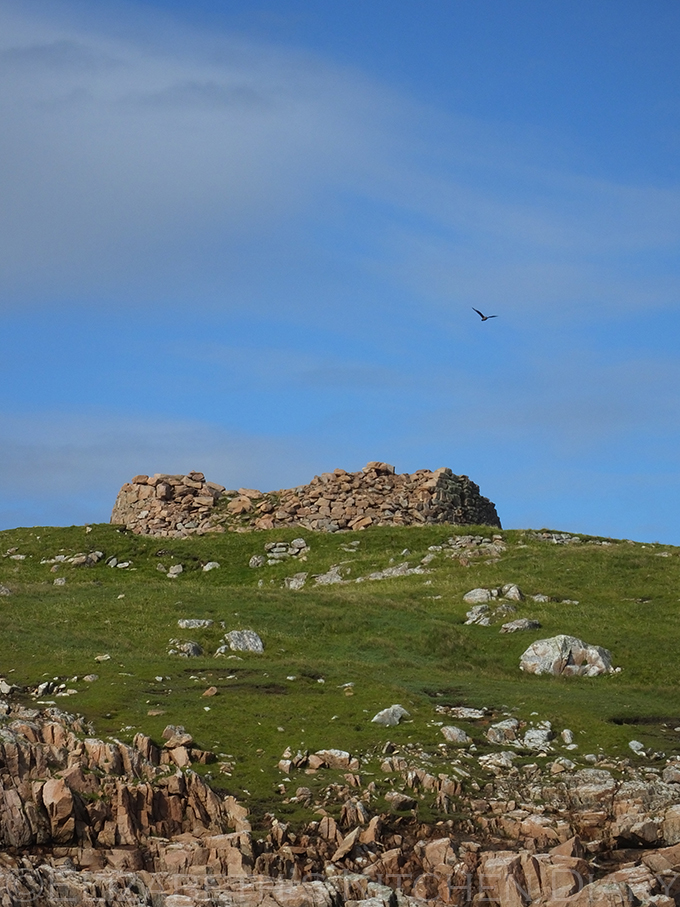 The Broch of Culswick and my 100th Geocache 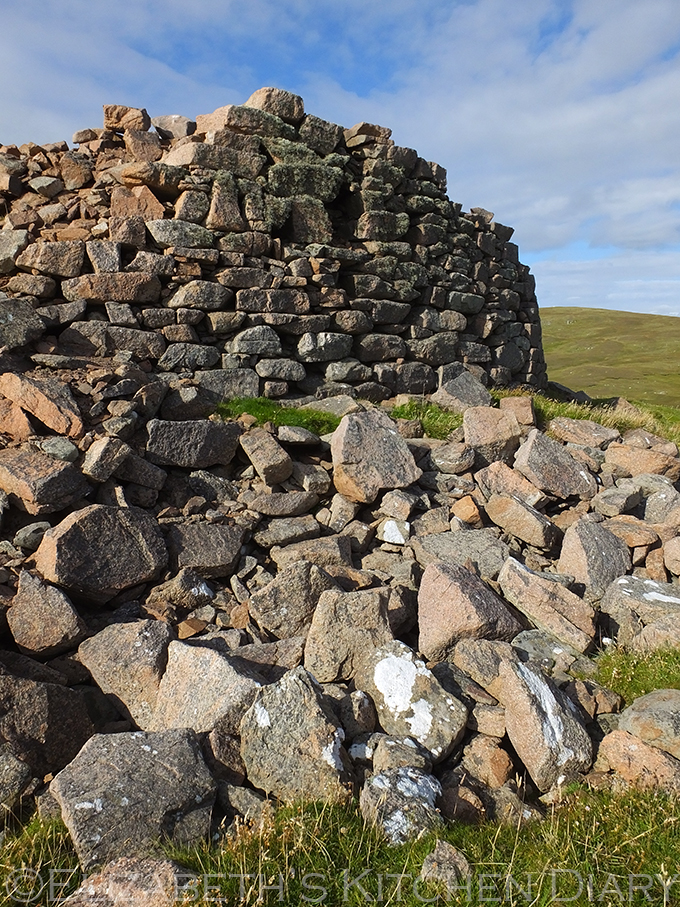 In 2010 a crafty friend of mine (Julia – who blogs over at Jaydee’s Ramblings) introduced me to the wonderful world of geocaching. For those of you who don’t know what this is, it’s a worldwide treasure hunt where millions of ‘treasures’, usually click lock boxes with little swapable items and a notebook, are hidden all over the world in interesting locations.

The co-ordinates for these locations are uploaded to the official Geocaching website where you can download them, and go off adventuring to places you might otherwise not have visited. It’s a great thing to do with kids, and it’s a great way to see the world – even new places on your own doorstep. Honestly, go and type in your postcode and see what’s hidden in your area!

Geocaching, for me, has sort of fallen by the wayside over this last year or so (I only found one, by accident, last year and logged it only a week ago!), but recently while out kayaking with my friend Julia, she kind of coughed and said, um, if you look over there you might find a cache. <points to grassy area nearby>. That was it, I was back on the geocaching wagon! There was a cache hidden where we started our trip, and a cache at the end too!

We’ve had a spell of rather lovely summer weather lately, so I’ve been looking for excuses to spend more time outdoors to make the most of it. On Friday, after school, my youngest and I headed out for a spot of caching – an attempt to locate the final two caches on the west side of Shetland I hadn’t already found. 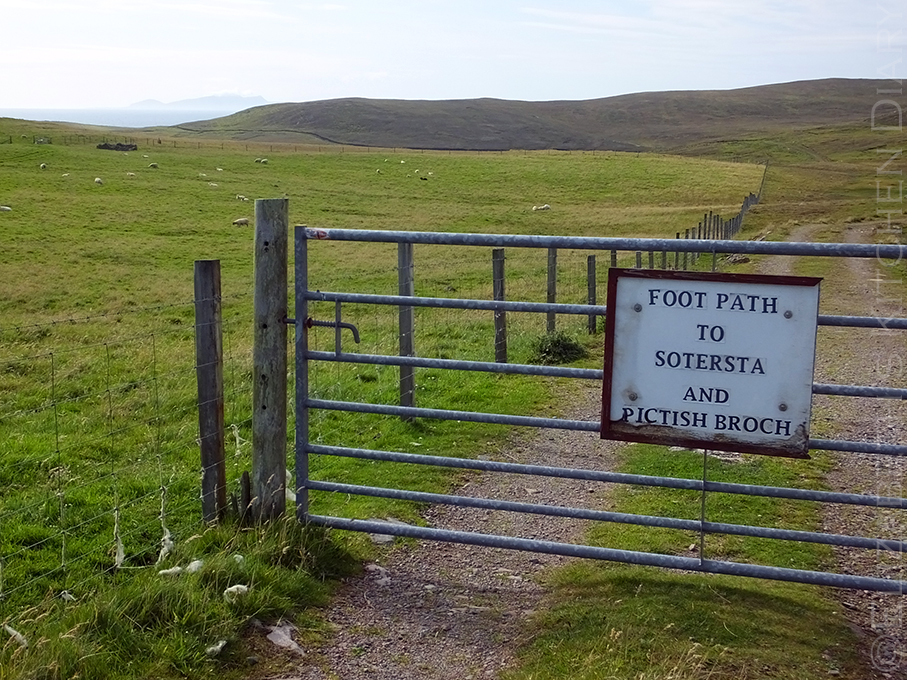 The Culswich broch is an unexcavated Iron Age broch at the end of a long and winding peat track on the west side of Shetland. It’s supposed to be one of the finest walks on the west side, and would you believe I’ve never been here before? This was new, uncharted territory for me, and the weather, again, was stunning! Just enough wind to keep the midges at bay and a glorious warm sun shining down. 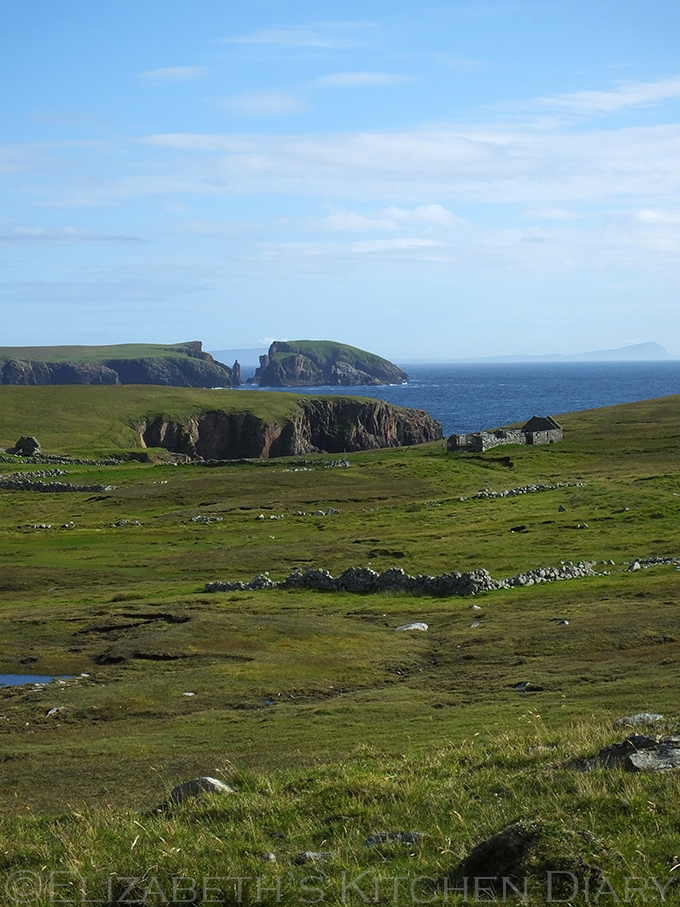 The ruins of an old settlement – Sotersta – can be seen all along the trail. Shetland caters really well to walkers, with many, many routes sign posted with Access Shetland signs in the most unusual of places! There’s always a place to go adventuring, no matter what the weather! 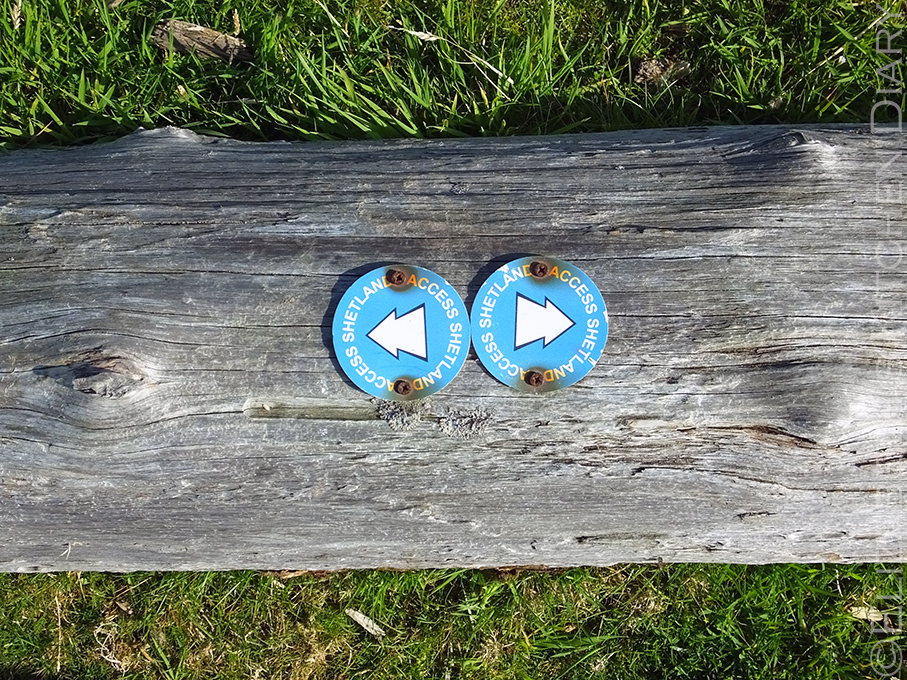 With a small child in tow the walk along the meandering path took us about 45 minutes and then we caught our first glimpse of the Culswick Broch atop of a steep grassy hill. You can see the island of Foula (a place I’ve yet to visit!) on the horizon. 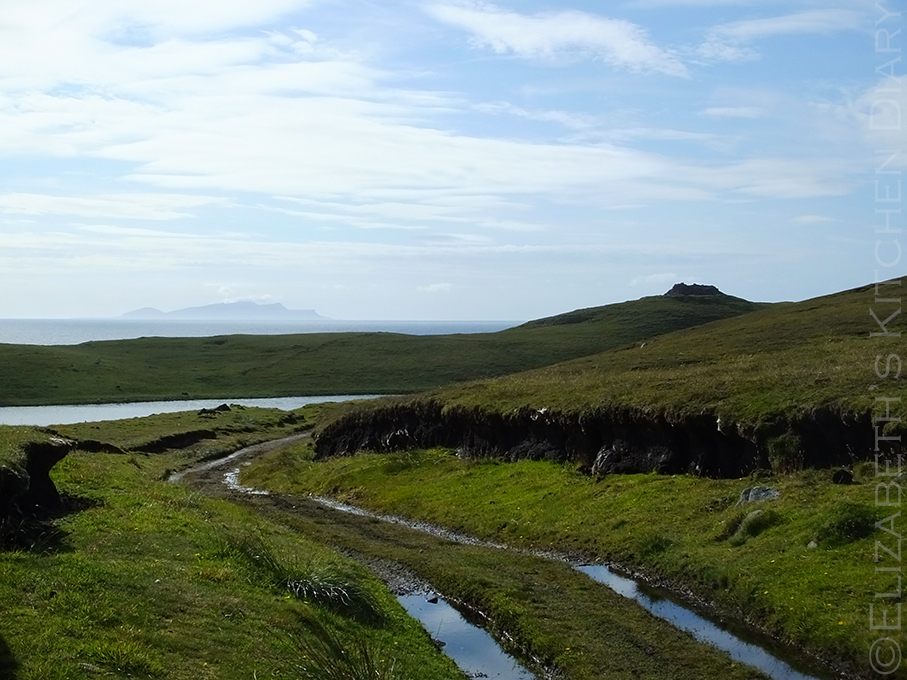 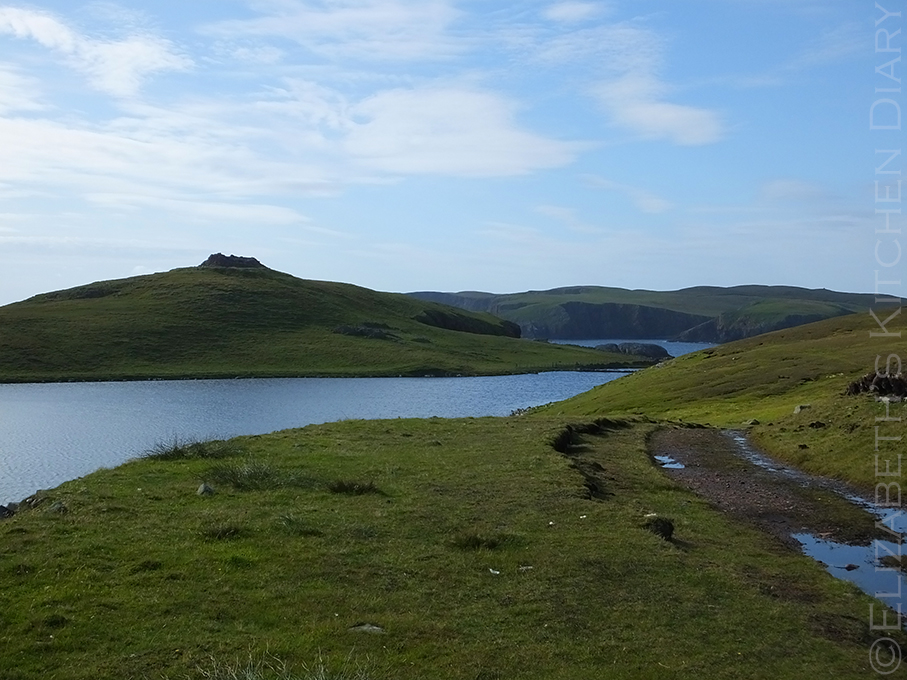 A fantastic stone causeway needed to be crossed in order to reach the imposing broch ruins above. This is followed by a rather steep climb, which my youngest felt the need to run up, much to my envy! 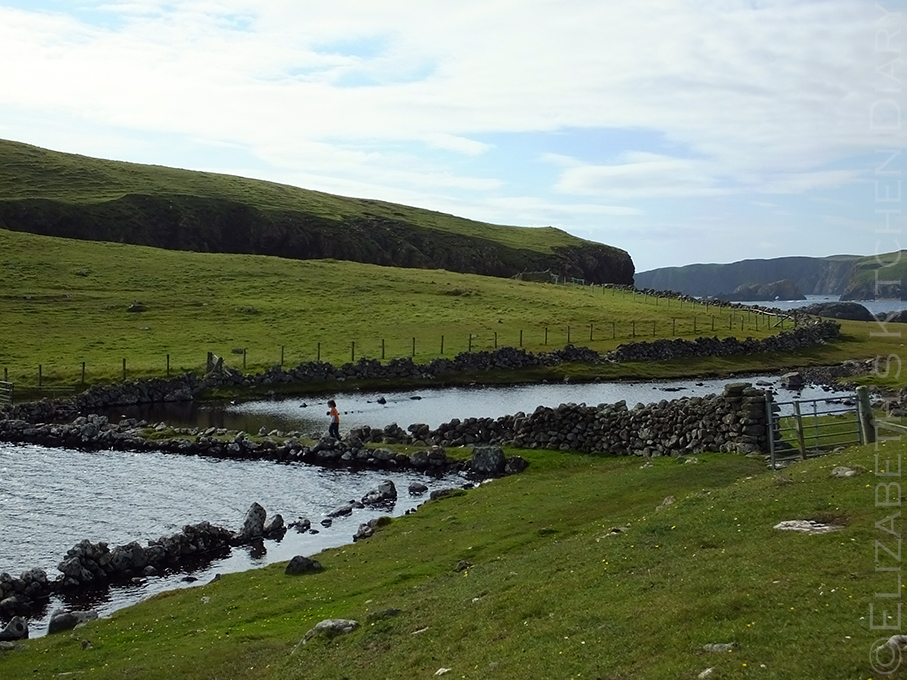 A broch is a “a prehistoric circular stone tower in north Scotland and adjacent islands.” Here in Shetland you can find the ruins of many of them. The best preserved are Mousa Broch on the island of Mousa on the east side and the Clickimin Broch in Lerwick. They date back to the Iron Age – 1200 BCE – 1 BCE and I believe they were used as both dwellings for the Pictish people, and as defensive strongholds. They are only found in Scotland.

These brochs are drystone, hollow towers that can stand up to 15 metres in height. The Culswick Broch stands at 3 metres tall at its highest point, as most of it has collapsed into the centre. You can see see the entrance, marked by a giant triangular lintel, although the passageway is mostly filled with debris. Although much of the broch has fallen down there’s enough remaining to imagine what its imposing structure would have looked like, back in the day. There was plenty to explore in addition to finding my 100th geocache! (Thanks, Hettismum, for the cache!!) 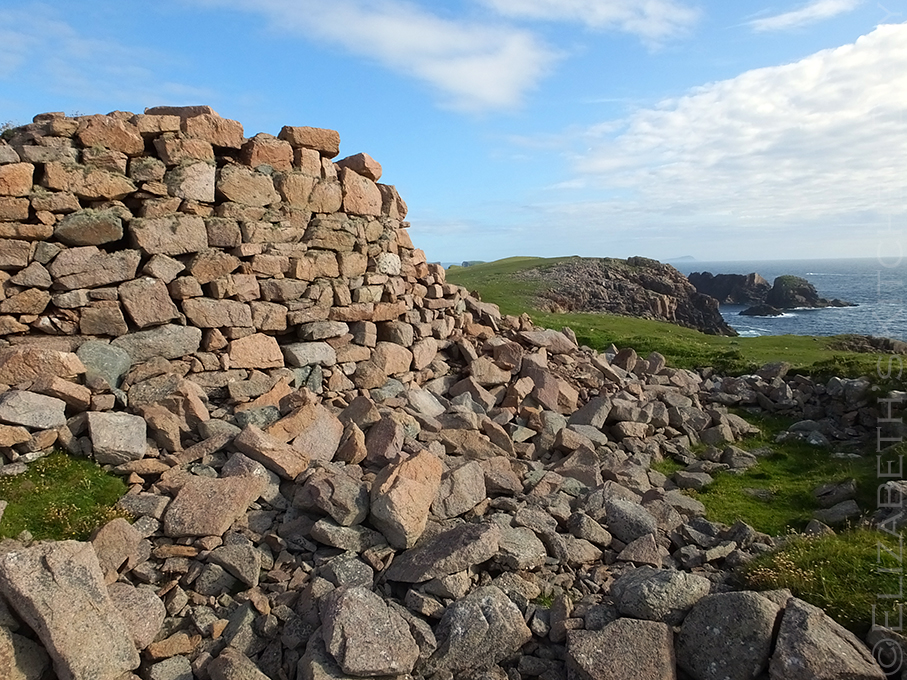 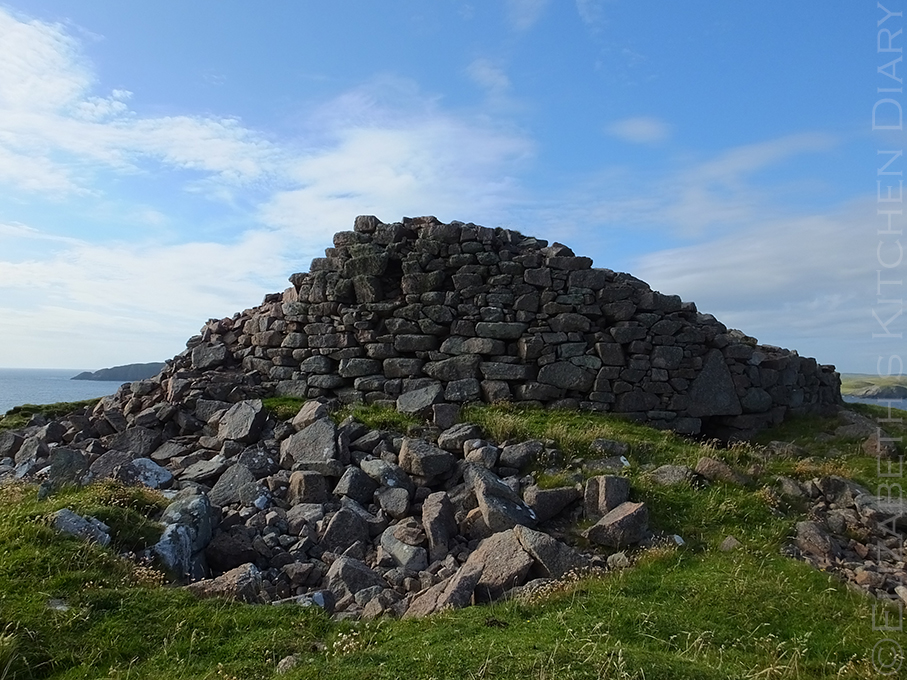 We had a nice little poke around the place – after all, it’s unexcavated – there might still be Pictish treasures hidden about – before asking my youngest what he’d like to do next.

He spotted a little beach type area at the bottom of the hill – quite clearly where the stones for the broch were obtained. The reddish pebbles here were small and smooth, like they’d been tossed about by the sea, but they are too far up from the base of the cliffs to have been eroded by water.

We spent ages here – my son throwing large rocks into a rock pool and me exploring the area. I sat on the pebbles for some time, just watching. Bonxies (Great Skuas) flew overhead, the airplane from Foula to the mainland passed over, a few fishing boats trundled by. It was lovely to just sit and be, basking in the warm sun. 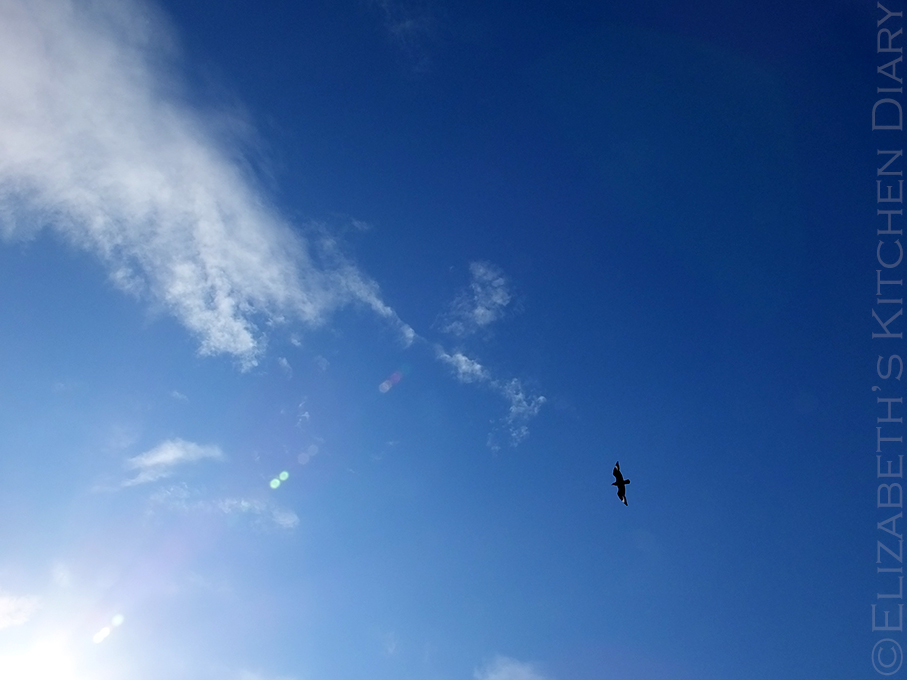 It took some coaxing in the end as my son didn’t want to leave, and on the walk back to the car he kept asking to go back to the rocky area as he had work to do!

While we walked he would go off for a bit looking at something and then he would sneak up behind me and hold my hand, chatting about all sorts of things. He’s the only one of my three children who will still hold my hand, and I think those days are numbered. The 8 year old is far too grown up and can “take care of herself” to want to hold my hand, and the 15 year old wouldn’t be caught dead doing such a thing.

We didn’t take the path back, rather, we wandered through the fields following fence lines and investigating the abandoned Sotersta ruins. We found the Sotersta standing stone too, I think. My son found a piece of rope in the middle of a field and that was his Indiana Jones whip for the duration of the walk. He also found a piece of scorched bark inside the stone ruins of a dwelling, and that was his iron sword. I love his imagination! 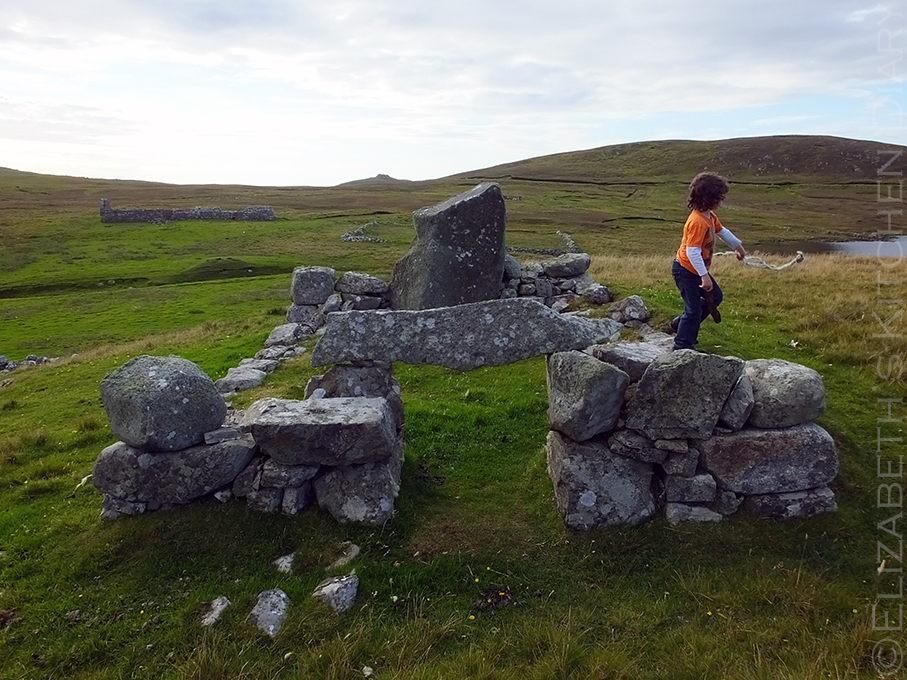 While on our adventures we ticked a few more items off a scavenger hunt that Tots 100, the UK’s most exciting network for Mum and Dad bloggers, and H&A – their headline sponsor – have challenged some of us parent bloggers to do. To find out what other parent bloggers have been finding look for the #HandAscavengerHunt tag on social media.

*This photograph was taken by my husband. While on the scavenger hunt we got up really early one morning to collect him from the ferry terminal after he’d been away travelling and there was a small sun dog visible in the sky. I only had my mobile phone on me and the photograph I got was terrible, and when I pointed the sun dog out to my husband he said he had taken one on his tablet not too long ago early one morning at work. So we’ve used that one instead because it’s a crackin’ photo! We did see a sun dog though, so it counts!