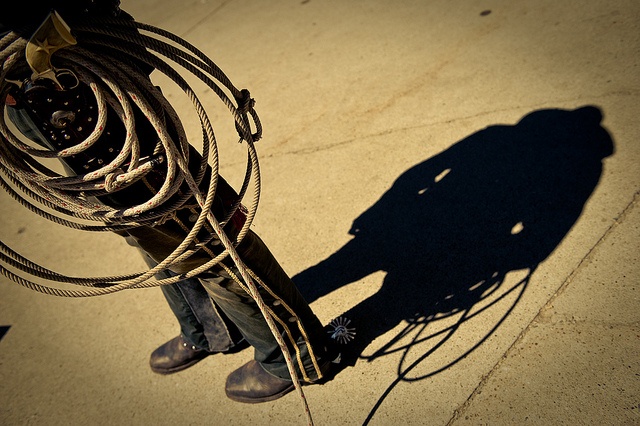 Skoki Health Bread (and that time I was lassoed) 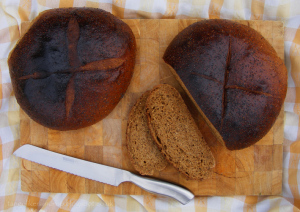 The burnt bread pictured above is the result of this month’s Random Recipes #29 food blogging challenge. Every month Dom from Belleau Kitchen tasks us to step outside our comfort zone and bake something selected randomly from our recipe collection. This month we’ve been asked to bake something healthy and happy. We were to take our recipe books, randomly open one and make the recipe on that page, no cheating.

The book I selected was A Taste of the Canadian Rockies Cookbook (1994) by Myriam Leighton and Chip Olver, a 20 pence charity shop bargain I found here in rural Shetland, an archipelago in the middle of the North Sea several thousand miles away from the Canadian Rockies. The book is a collection of “mouth-watering recipes from the best restaurants in Rockies.” The recipe I opened the cookbook on was for Skoki Health Bread. There we go. Sorted! It’s got health in the title, we’ll make that.

The ingredients list sounded appealing: whole wheat and plain flours, sesame seeds, poppy seeds and millet, sweetened with what seems a very large quantity of honey and molasses. You can’t get proper Canadian molasses (like Crosby’s) here in the UK, so I had to substitute with black treacle (I reduced the quantity slightly to compensate).

The instructions are the most poorly written recipe instructions I’ve ever come across. It pretty much read: plonk it in a bowl, knead for a bit, form into loaves, let rise and then bake it until it sounds hollow inside. At what temperature should I have baked it? I went for 220 C and after 20 minutes in the oven it was burnt on top. I turned the bread over, covered with foil and baked it another 15 minutes and the resulting bread was still dreadfully sticky inside, like it wasn’t cooked. The dough was very sticky while I was kneading and I had to add quite a bit more plain white flour and wash the sticky dough off my hands a lot to be able to knead it properly.

The resulting bread has a nice flavour, but the texture, even when thinly sliced and toasted, is chewy and awful. I won’t be making it again, but if you want to have a go the recipe can be found here. Most of the two loaves I made are now drying in a bowl in an attempt to make bread crumbs. I do detest food waste!

So, since I don’t have a recipe for you I’ll share a little random story about the Rockies instead, if you wish to hear it. 🙂

Although I was born on the west coast of Canada, I grew up on Cape Breton Island on the east coast, where my maternal grandfather was born and bred. I was raised a Maritime lass, and despite moving several thousand miles across an ocean to Scotland I’ve not lost the unique characteristics of a Maritimer. You’ll have to meet one to know what I’m talking about. <wink>

One of the things many Maritime youths do when they leave full time education is to ‘go west’ seeking work. There’s a saying in Cape Breton: Why is there no work in Cape Breton? Because the work’s all been done!

So, at the tender age of 19 the fellow I was dating at the time and I pooled what little money we had together and moved out west to the Rocky Mountains of Canada. We’d arranged job interviews as housekeepers at a hotel in Banff, Alberta, a small town nestled right in the middle of the Rockies.

We landed at the Calgary airport late at night and we realised that although we had enough money to get the train to Banff we didn’t have enough money to get the bus to the train station. A lovely woman working at the lottery desk in the airport heard of our dilemma and told us to wait a short while until she finished her shift. She offered drive us across the city to the bus station herself. She had a young daughter of her own and she hoped that if her own child ever got herself into that situation someone would be there to help.

So we arrived in Banff in the dead of night, in the winter, with a suitcase in hand and a mere $14 between us. The hotel manager showed us to our temporary accommodation, an ancient (by Canadian standards) rickety building built as a brothel way back when when the Trans Canada Railway was being built through the mountains. Railway builders need their nookie, you know. This hotel in Banff has a high turnover of staff and they have purpose built accommodation to house them, but first you have to pass the cleanliness test living in this old brothel. If you can prove you can keep it clean you get moved into swish accommodation somewhere in the town, usually with roommates. We made that $14 last two weeks until our first pay day, you know. I have no idea how. I think we were mostly hungry.

I only lived in Banff for nine months but I had many adventures during that time. I became interested in herbalism there after borrowing a library book on the medicinal herbs of the mountains. Many a sunny afternoon was spent wandering the wilderness trying to identify plants. A friend who worked for the Banff National Park used to report grizzly bear sitings to me so I knew where I could and couldn’t go. I even conquered a few mountains (please note – never climb towards the sun wearing skimpy clothing and no sunscreen as you can burn to a blistering crisp) but I never had the courage to slide down the avalanche chutes on bin bags, as some of my work colleagues did.

One fine Spring morning I opened my front door to head to work and there was a small herd of rutting elk grazing in my front garden. I ended up throwing empty plastic camera film cases at the nearest elk in a bid to get it to shift away from the door so I could escape. Rutting elk are scary and they often held up the town traffic. I probably would have been fined for harassing the wildlife if I’d been caught throwing film cases at it, but I didn’t get caught, the elk moved to the next garden and I fled to work only marginally late.

I spent a lot of time sitting on the benches in the main street in the town after work, watching the people walk by. Banff gets thousands of tourists every year, so there were so many different people to watch and meet. Working in a hotel as a housekeeper brought its own adventures too, with some rather odd, peculiar, scary and hilarious encounters (naked talkative Germans spring to mind, and then there was that blood soaked bed sheet…). I often felt sorry for the tour buses of Japanese tourists who would come late afternoon and leave first thing the next morning and never see a single mountain due to low cloud cover. Imagine travelling all that way to see mountains and not see any because of the fog. They were the best tippers though. They often left a $2 coin on the bedside table along with a little paper origami bird or some other little gift. I still have one of those paper birds safely tucked in a box, and some lacquered paper bows too. These sometimes make an appearance in my blog photos. 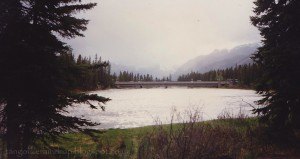 The banks of the ice-cold glacier fed Bow River was a regular haunt of mine. Despite being surrounded in majestic mountains as a Maritimer I longed for the sea and this was the only place I could hear moving water. If I closed my eyes I’d imagine it was the sea. The Bow River has recently caused massive flooding and damage due to high rainfall, I hear on the news. My heart goes out to those affected by the wild unpredictability of nature.

Then came the Calgary Stampede. The town was inundated with strapping young men wearing blue jeans, large metal belt buckles and wide brimmed cowboy hats. There was an electricity in the air, an excitement of impending adventure. I would have savoured it more if the fellow I had been seeing hadn’t been having so many affairs with other hotel staff! We’d just split up after a massive row and I’d stormed out of our flat on the corner of Muskrat and Beaver Street, slamming the door behind me. I was marching, furious, stamping down the road as fast as I could to try and clear my mind and decide what to do next. The next thing I knew there was a rope around my ankle. I’d been lassoed by a cowboy practising for the stampede. Still furious I didn’t say a word. I slowly lifted my foot off the ground and glowered at this poor chap. I’m sure there was steam coming out of my ears. He apologised profusely and quickly removed the rope from my ankle, and I continued to storm down the road with a little thundercloud over my head.

Shortly after that I moved back to the east coast, my heart in pieces, and started a new adventure (but that’s another story).

It wasn’t until some years later I thought about that fellow who lassoed me. I wish I could apologise to him. He probably thought I was angry at him and who knows what effect that might have had on his day or even the rest of his life. Maybe he never lassoed another woman again out of sheer fear! I’m so sorry Calgary Stampede cowboy, I really am. Now that I’m in my mid-30s I look back upon that event with regret. Who knows what might have happened if I hadn’t been so angry. It is a different page of my life that will never be written.

If anyone thinks they might know this fellow, can you tell him I am sorry? 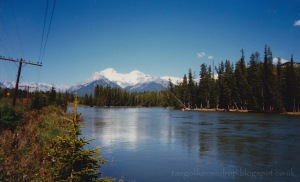