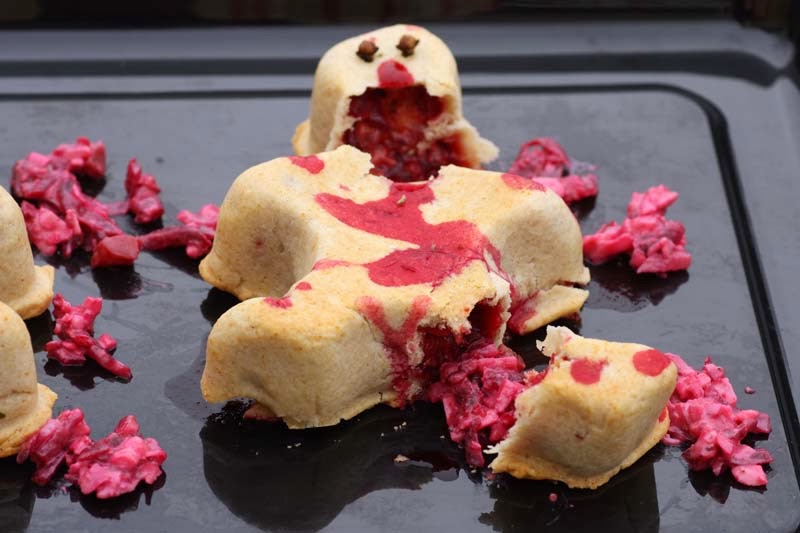 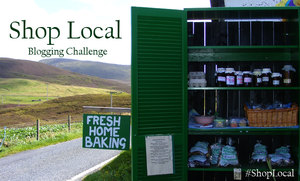 This Shop Local #3 round-up features recipes using ingredients from as far away as Pennsylvania, Australia, France, Scotland, England and back to America again in the Union Square Farmer’s Market. Thank you to everyone who shared recipes and posts featuring produce local to your region and to those of you who highlighted the importance of shopping local. I do hope you enjoy the round-up!
The Shop Local #4 linky is now open – just scroll down to the bottom of this post and link up your own recipes throughout the month of December. I can’t wait to see what you come up with! If you are new to the challenge you can read all about it here. 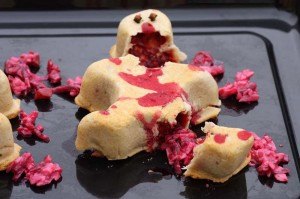 Shaheen over at Allotment 2 Kitchen starts things off right away this month with her Halloween themed bloody massacre beetroot man pie! Shaheen is not a big fan of Halloween herself, but she has nieces and nephews in the family who are and so she made this spooky vegetarian dish for them and earning herself the title ‘Cool Aunty!’ Locally produced Dragon Cheddar Cheese and Welsh Red Mustard are two main ingredients in this beetroot dish. I love it, but then I am a big fan of all things Halloween! 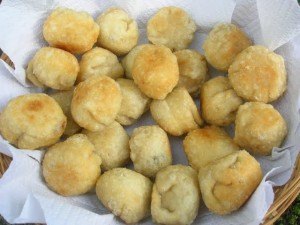 Choclette over at Chocolate Log Blog uses local raw organic milk in her pistachio and chocolate kachori. These are pistachio and chocolate cheese balls flavoured with cardamom and fried inside pastry cases. This was the first time Choclette had ever tried making these delicacies and despite the fact that there are a great number of steps and something could go wrong at any time they turned out perfectly, crispy on the outside and sweet and creamy on the inside. 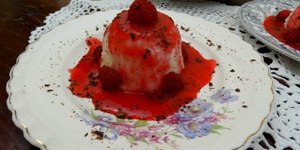 Alida over at My Little Italian Kitchen shares one of her favourite childhood dessert recipes – a raspberry vanilla light mousse, also known as “budino alla vaniglia”. She made this classic milky Italian dessert using organic milk from Kent. Alida says she used to have this pudding a lot, growing up, and that she added raspberry sauce for a splash of colour, saying the flavour compliments the milk taste of the mousse itself. I think it looks superb! 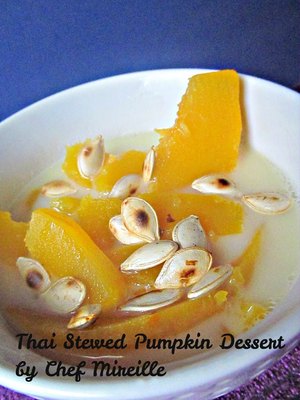 Chef Mireille uses an American sweet pumpkin picked up a local farm near to her in New Jersey, USA, to prepare a Thai stewed pumpkin dessert. This dessert involves stewing pumpkin in sweetened coconut milk and sprinkling with toasted pumpkin seeds. The seeds, she says, adds a nice nutty flavour to this vegan dessert. 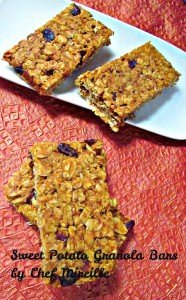 Chef Mireille also picked up some sweet potato at the Union Square Farmer’s Market in Manhattan and made them into these very interesting sounding sweet potato granola bars. Sweet potato in a granola bar? Can’t say I’ve ever heard of that before! 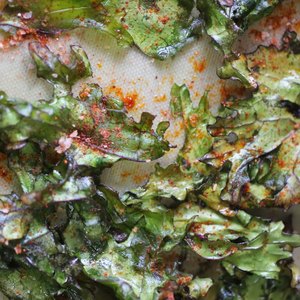 Now we zoom across the world to Johanna’s blog, Green Gourmet Giraffe, all the way from Melbourne, Australia. She’s finally hopped on the kale chips train and shares a lovely sounding recipe for smoky kale chips using kale she picked up a local farmer’s market. I tried making kale chips once using supermarket brand kale and they were utterly dreadful, but I have bookmarked Johanna’s recipe to try again with my organic veg box kale to see if I too can become a convert! 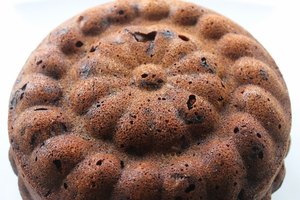 JibberJabber in Chesterfield, England shares this delightful beer cake she made for her local Clandestine Cake Club meeting. The cake is made with a beer local to that area called Wild Raven. According to the makers, Thornbridge Brewery, “Five malts and six hops combine for bitter chocolate flavours with dark roasted fruits.” JibberJabber thought this sounded perfect for a fruit cake, so she set to baking! Her recipe sounds delicious, with plenty of dried fruit and mixed spice. 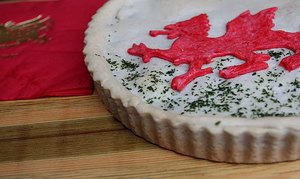 I absolutely love the look of Shaheen’s second entry this month – the Welsh Vegetarian Red Dragon Tart. I love decorated food and I think her tart, aka cheddar, mustard, leek and potato pie sounds superb. She uses Really Welsh Leeks grown in Flintshire, North Wales, as well as other Welsh ingredients such as : Blas y Tir potatoes from Pembrokeshire, Dragon Mature Cheddar Cheese and Welsh Red Mustard, all local to her. This is a perfect Shop Local recipe! 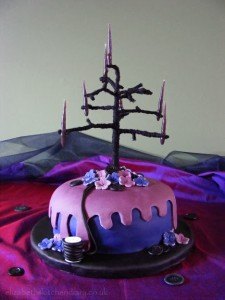 My own entry this month is Nigella Lawson’s buttermilk birthday cake made using local Shetland Farm Dairy buttermilk. The cake is decorated with a silly quantity of sugar in a Coraline theme for my daughter’s 7th birthday. I’m so glad she’s inherited my taste for things quirky and unusual! 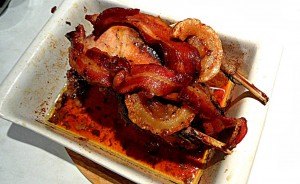 Galina over at Chez Maximka roasted some locally sourced pheasants from Denshams, UK with some bacon and served it with red cabbage, roast pumpkin slices and quince mash! Get ready Galina, I’m coming over for dinner – this sounds superb! Galina roasts her pheasant with bacon with juniper berries, lemon and thyme, and the bacon on the top all crisped like that is making me salivate! A superb recipe!

Now to South West France where Anneli from Delicieux cooks up a true Spanish tortilla with black pudding. Anneli uses some black pudding sourced from her friend’s organic farm in France to make this twist on the authentic Spanish tortilla made with sliced potatoes and eggs. The black pudding, made from the rare breed of pig Noir Gascon, adds, Anneli says, “another peppery dimension that was a real treat.” 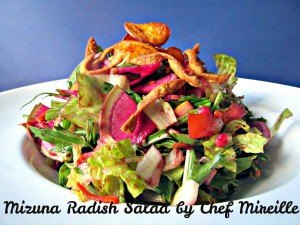 In Chef Mireille’s third entry this month she combines mizuna lettuce from the Union Square Farmer’s Market in Manhattan with radish, carrot, apple, tomato and pomegranate with a blackberry vinegar dressing in this very colourful mizuna radish salad. 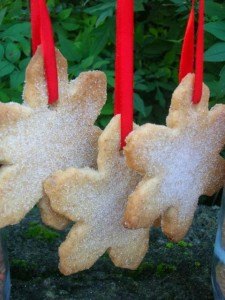 Cotehele flour and chocolate bought from the Dartmoor Chilli Farm at a farmer’s market in Plymouth are both used in this festive chilli Christmas shortbread biscuits by Choclette over at Chocolate Log Blog. I am a big fan of the chocolate chilli combination so these biscuits sound very appealing to me. The perfect warmer for these cold Winter days!

Sustainable Mum shares her gorgeous from scratch kale pizza recipe made using her own home grown kale. You can’t get any more local than your own garden, can you! She says that the kale gets lovely and crispy, not unlike kale chips, when the pizza cooks. It sounds like a very interesting way to cook pizza. The wholemeal pizza base is a healthier alternative to the usual white flour base too. 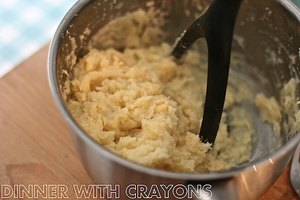 Smoked cheese and parsnips, mashed together. Mmmmmm! This two ingredient recipe by Sarah over at Dinner with Crayons uses cheese purchased from a local independent shop in the UK and a bag of parsnips which were intended to be roasted for Sunday lunch, but Sarah got distracted (as we all do on occasion!) and ended up parboiling them a little too much. She salvaged them by mashing them with cheese to make a lovely mash – I think it sounds fantastic!

Anneli over at Delicieux shares a second recipe this month with us – veal escalope stuffed with Brie and ham. First she explains the massive improvements in veal farming over the years; veal no longer has the cruel stigma associated with it as it had in the 80s. Anneli uses local rose veal from calves she knows with 100% certainty, had a very happy life in the south west of France. She writes, “The veal was so tender that it cut like butter. The oozy soft melted brie inside worked so well with the chunky tomato sauce and the salty ham whilst being mild enough so as not to over power the incredible meat.” 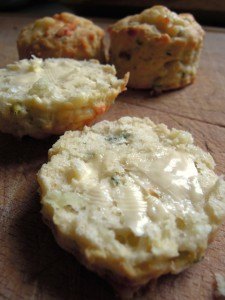 Vanesther over at Bangers and Mash includes a taste of Somerset in her Cheddar cheese, apple and sage scones made using west country cheddar cheese and apples. Nothing beats a good scone and these ones sound superb with their flecks of cheddar, sage and apple dotted throughout. She writes about the disappearing orchards in Somerset and how local producers are trying to reverse the decline. This highlights the importance of supporting local producers. 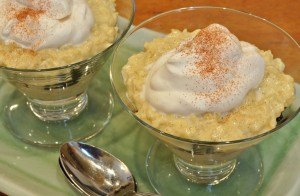 Alexandra, the Lass in the Apron, lives in Pennsylvania and this month she’s shared her basmati rice pudding with winter fruits parfait. This recipe includes dried apples (snitz), apple cider, milk and cream she picked up from a vendor in her local Farmer’s market. She loves being able to buy such a variety of ingredients from local vendors. Alexandra writes, “the pudding never became as creamy as ordinary rice pudding: the grains of rice remained fairly distinct and kept some firmness. And the basmati gave the pudding a noticeably nutty fragrance, which I enjoyed very much. It added a slightly exotic touch to what is usually a very homey dish.” 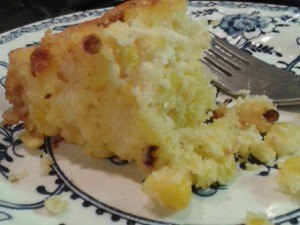