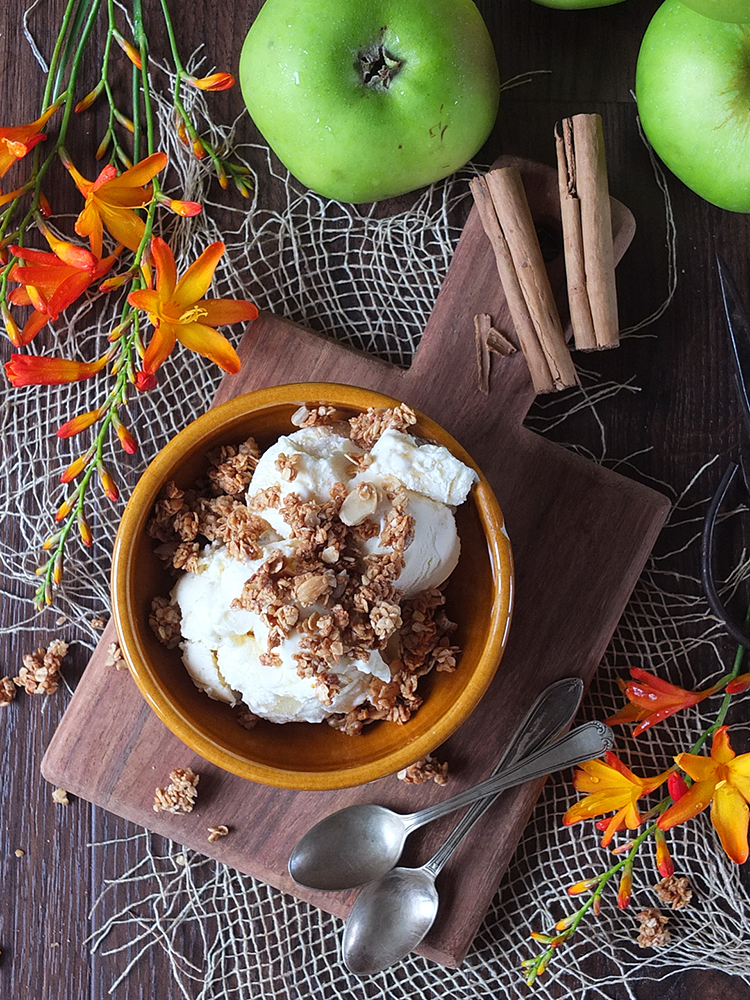 Happy Friday everyone! I hope you’re all having a fantastic day and have some rather grand adventures planned for the weekend. Me, I have my tank built conditioning camp on a Saturday morning, so Friday is my day where I allow myself a little indulgent treat, after all, I’ll burn it all off in the morning at my fitness class, right?

One of my favourite treats is a bowl of ice cream topped with crumbly oat biscuits. The sweet creamy ice cream with the savoury buttery crunch pairs just perfectly.

For this recipe, my final in the Nutri-Brex 5 Ways Challenge I’ve been on this week, turns their gluten-free granola into a delicious crunchy ice cream topping, and to accompany: an incredibly moreish apple cinnamon swirl ice cream. The best thing too, it’s no churn! Simply beat, swirl and freeze! Easy peasy! 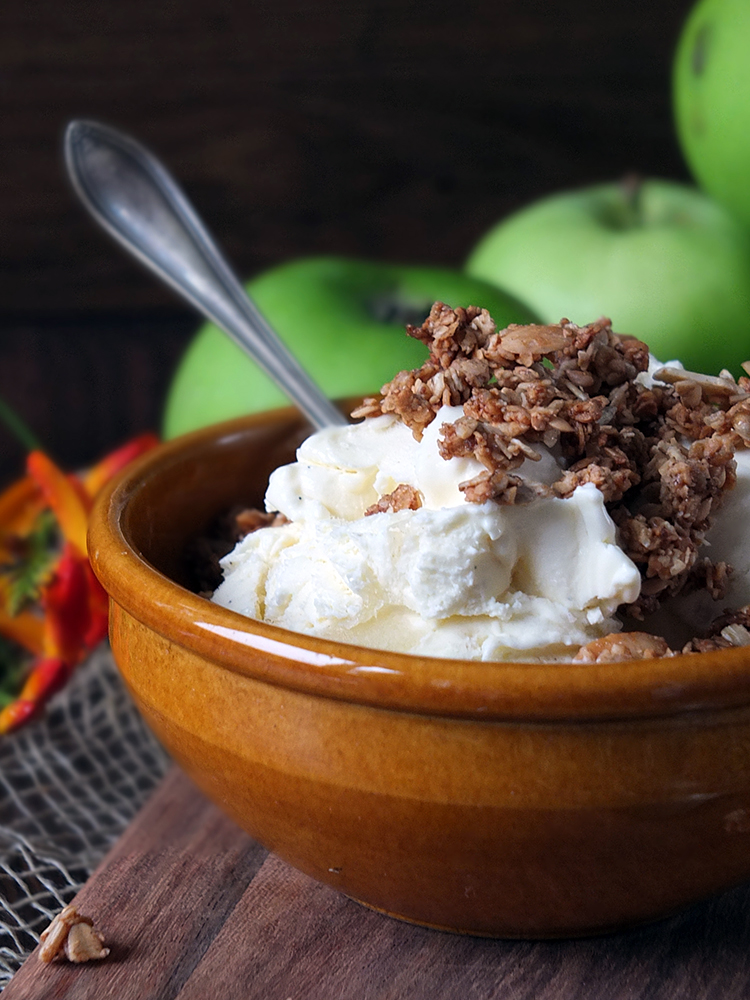 You could, if you wanted, go through all the bother (which isn’t much really) of making your own applesauce for this recipe, but I’ve cheated and used a bottle of store-bought Bramley apple sauce. I’d probably make my own if I had access to fresh wild apples like I did growing up in rural Eastern Canada, but alas, apples in the UK cost a pretty penny and applesauce doesn’t!

I’ve added a tiny drop of Calvados apple brandy to the cinnamon-infused applesauce mixture. This is to lower the freezing point. Without a drop of alcohol, the fruit swirl would turn to ice crystals in your ice cream mix, and that’s not a nice texture really. Just a drop of alcohol helps with that. If you don’t have Calvados use a bit of vodka, or even rum. 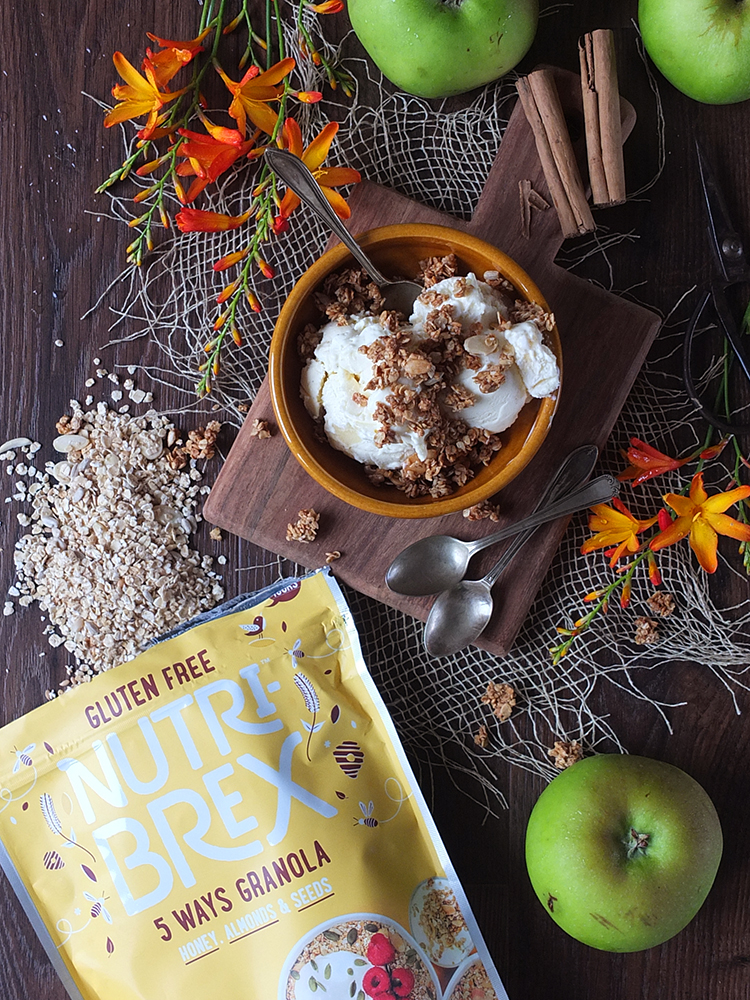 Nutri-Brex is an award-winning gluten-free brand who have recently expanded their range to include 5 Ways Granola. Their honey, almonds and seeds variety feature honey, golden linseeds, almond flakes and sunflower seeds as well as gluten-free fine-cut oats, which works really well in this No Churn Apple Cinnamon Swirl Ice Cream with Granola Clusters recipe.

Nutri-Brex granola can be used in a minimum of five different ways: 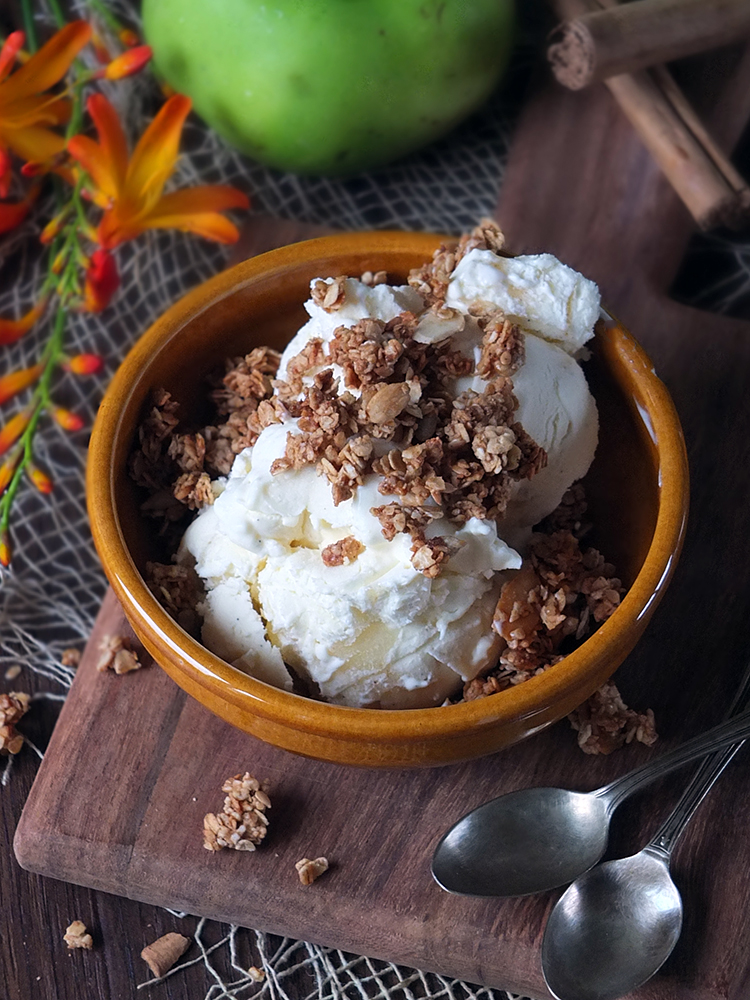 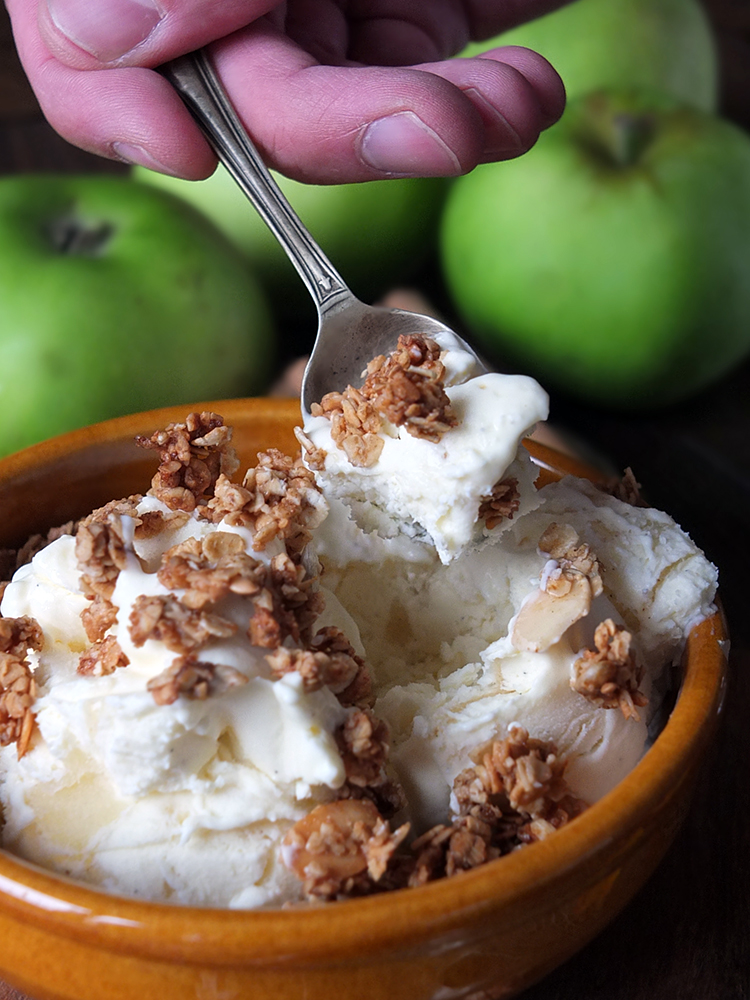 This week I’ve been sharing the results of my Nutri-Brex 5 Ways Challenge. I hope you have been inspired! Don’t forget to check out my other recipes: on Monday I shared my coconut and mango breakfast parfait (overnight oats), Tuesday featured my three-ingredient high-protein gluten-free crepes, Wednesday I introduced you to my Caribbean Crush Post-Workout Protein Smoothie (which, in all honesty, could also be a smoothie bowl as it’s so deliciously thick) while Thursday I shared my highly portable Gluten-Free Granola Bars with Hazelnut, Coconut & Quinoa.

You can find Nutri-Brex 5 Ways Granola on their online shop for only £3.49 for 400 grams. Follow them on Facebook, Twitter and Instagram for more recipe inspiration too – a better breakfast needn’t be a dull breakfast! If you’ve made something with one of their products let them know! Tag @NutriBrex and use the hashtag #MyNutriBrex.

How do you jazz up your breakfast granola? Let me know in the comments! 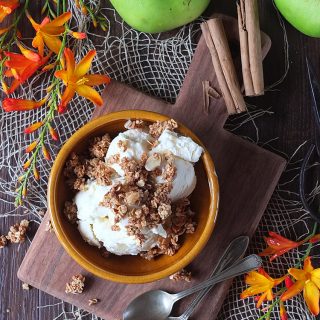 for the granola clusters

for the no churn apple cinnamon swirl ice cream

This is a commissioned recipe for Nutri-Brex. Thank you for supporting the brands who make it possible for me to do what I love: mess up my kitchen and share recipe stories.

I’ve been doing a lot of outdoor adventuring lat

You know when you step back, take a look at your l