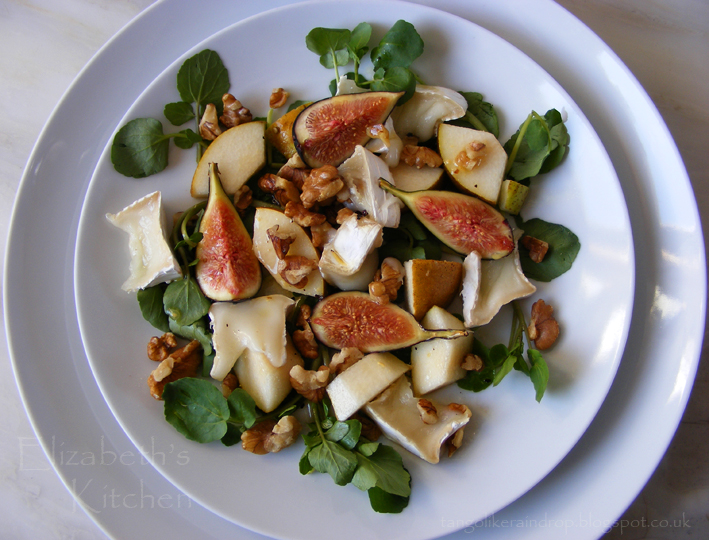 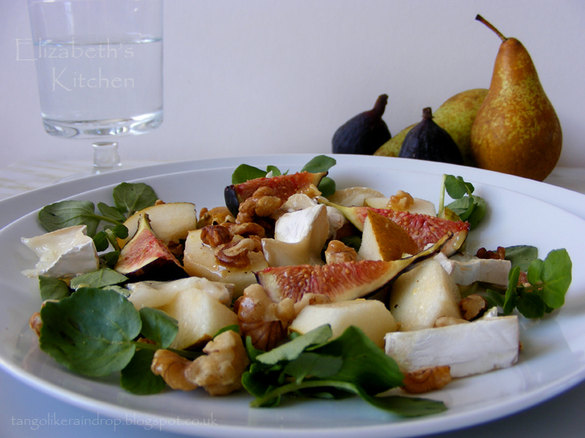 I confess to having never tried a fresh fig before. They’re ugly little fruits, aren’t they, and I’d never before felt the need to try them. I’ve had them in biscuits; I fondly remember fig newtons as a child while growing up in Canada (were there really figs in the fig newtons?), but good golly fresh figs are ugly and unappealing! They are expensive too, but the embarrassment of admitting to my fellow foodies that I’ve never tried a fig was just too great so I took the plunge and bought some. I found a palatable sounding recipe (read: I knew I liked the rest of the ingredients)  from Delicious Magazine which I slightly adapted to use ingredients I had on hand, namely, a 64 g circle of Cornish goats cheese and half a bag of peppery watercress.

The ingredients were laid out on some small salad plates as artistically as I could and I set one down in front of a very reluctant other half. Apparently, he confessed later, he was making faces at his food when I couldn’t see! He wasn’t that keen on trying fresh figs either. Sometimes this food adventure I am on doesn’t particularly appeal to him.

My, what a surprise! Fresh figs, especially with this combination of warmed goats cheese, walnuts, pear, peppery watercress and honey mustard dressing, were wonderful! They’re sweet, with a lovely texture and moreish exotic flavour, which I’m sure would be reminiscent of a times in the middle east, had I ever been there. Both of us cleaned our plates. Figs are now going to make a regular appearance in our shopping trolley. I shall have to experiment more!

Moral of the story: Never judge a fruit by its cover, er… skin… um, inherent ugliness! 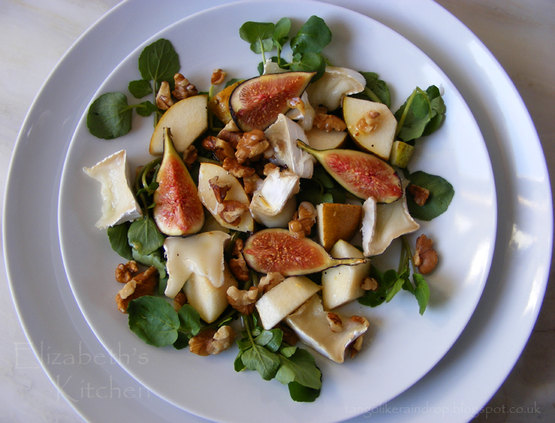 Fig, Goats Cheese, Pear & Walnut Salad
by Elizabeth
A light, fruity lunch or starter.
Ingredients
Instructions
1. Preheat grill to medium.
2. Arrange quartered figs, sliced goats cheese and walnuts on a small tray.
3. Place tray under the grill for 5-6 minutes, until warmed through.
4. Meanwhile, thickly slice pear and arrange on a plate with the watercress.
5. Whisk the remaining ingredients together to make a dressing.
6. Arrange warmed figs, goats cheese and walnuts over the pears and watercress. Drizzle with the dressing and serve.
Details

I have entered this recipe into Javelin Warrior’s Made with Love, Monday’s round up of from-scratch recipes. 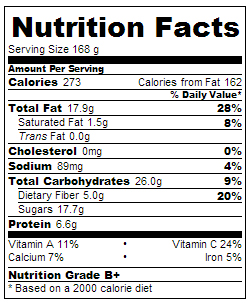