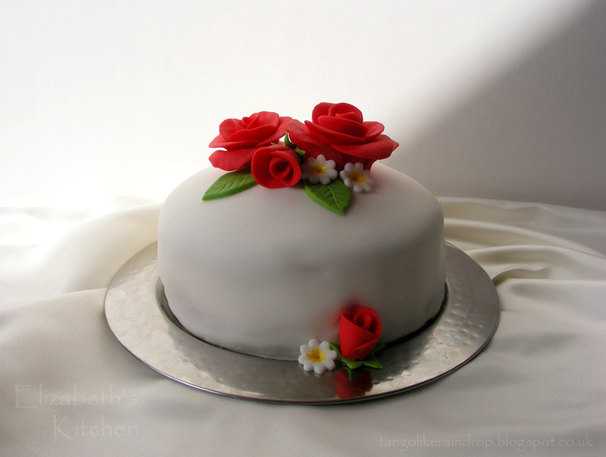 To celebrate the birthday of a friend I thought I would surprise her with a homemade cake. I fondly remember rock hard butter cream roses from my childhood birthday cakes and seeing as how I had an excess of coloured sugar pastes leftover from my youngest’s Angry Birds themed birthday cake last week I thought I would experiment and make try making some roses myself.

I started by making a cake recently posted by Dom at Belleau Kitchen. In honour of Mothering Sunday he shared his mother’s lemon cake recipe and as soon as I saw it I thought it would make a perfect birthday cake. I scaled up the ingredients by half, at his suggestion, to make enough batter to fill two seven inch round cake tins. I sandwiched the two layers together with a generous quantity of lemon flavoured butter cream frosting and spread a thin crumb layer around the outside. As you can see, I need to work on my technique of smoothing the outer butter cream layer as the white rolled icing is still a bit bumpy. I’m sure I’ll get better with practise. Any tips would be greatly appreciated!

Next came the roses. I found a simple tutorial by Yasmin at The Baking Project which is easy to follow and very effective, I think. The ivory flowers were made using a small flower shaped cutter. I made an indentation in the centre with a pointed modelling tool and painted natural yellow food colouring in the centre with a watercolour brush. The leaves were made freehand and I’m now inspired to invest in some leaf cutters. I sprinkled some edible silver glitter over the top to give a sparkly dew-drop effect. All in all I think it’s pretty effective and not a bad first attempt at making sugar paste roses. The whole decorating process took just over an hour, so it is certainly not a time-consuming process (unlike the Angry Birds cake!).

My friend was absolutely delighted with her cake and we shared some over a girly night in with a film. The cake itself was superb – lovely, light, lemony and with a perfect crumb.

Although this recipe had been bookmarked for only a few hours before I made it, it was still bookmarked so I am adding it to Jacqueline from Tinned Tomatoes’ Bookmarked Recipes #22 round up. I’m keeping the recipe in my bookmarks folder because it’s a fantastic recipe which I will definitely be making again. 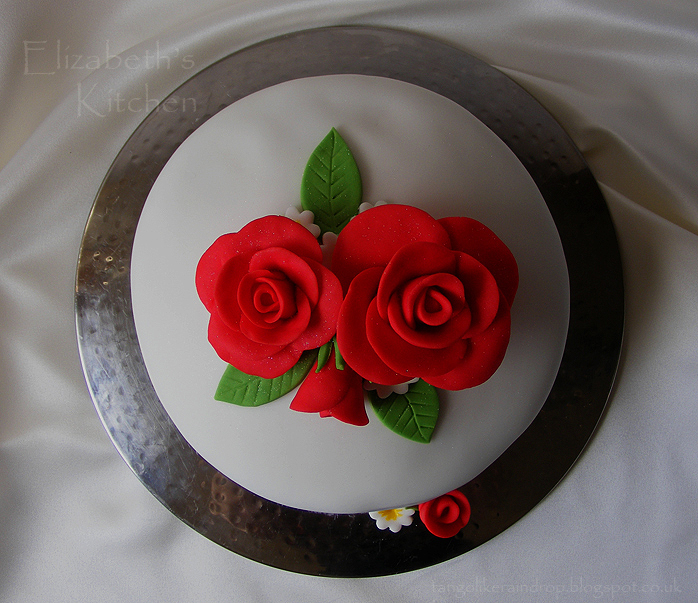