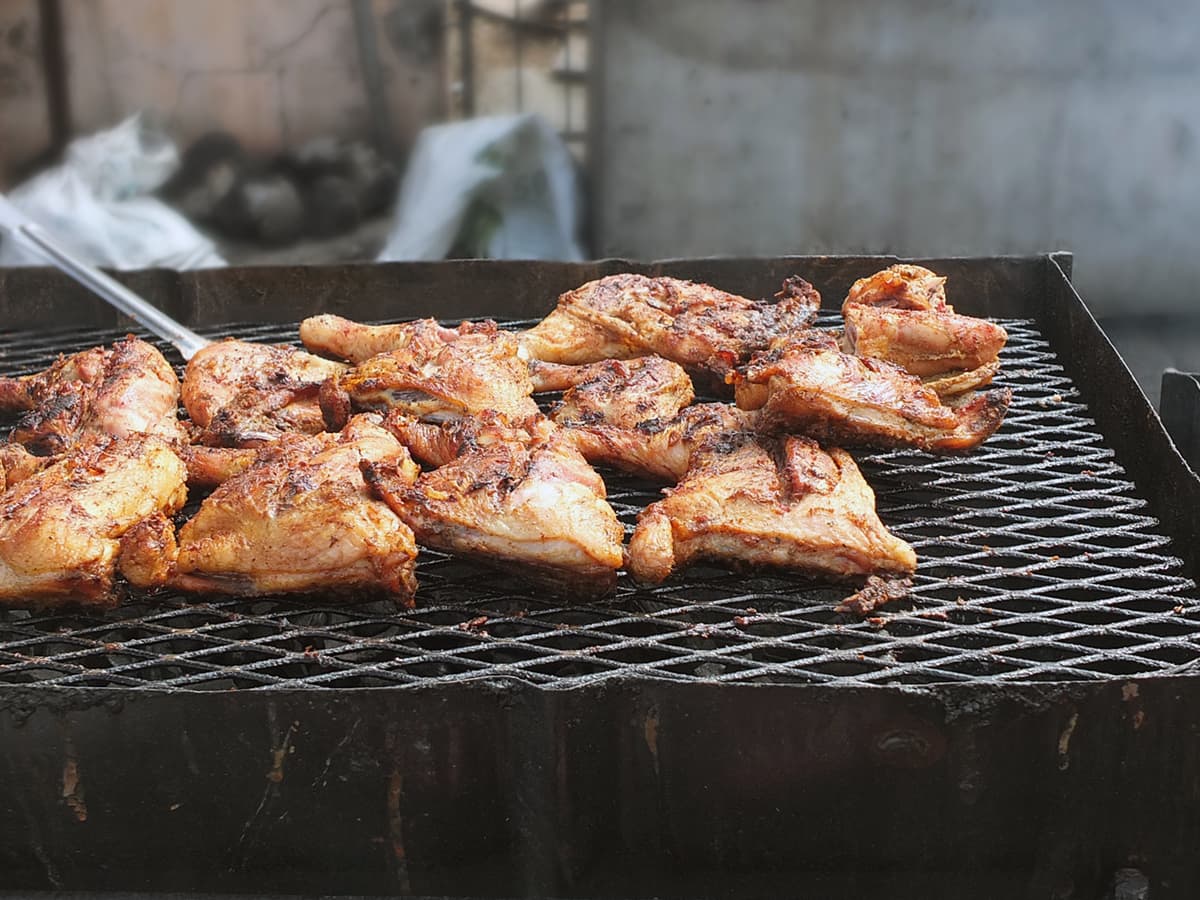 Published on December 10, 2020 by Elizabeth Atia

It was during a winter visit to the Caribbean island of St. Kitts where I had a taste of the most succulent and flavoursome beer barbecued pork and chicken I’ve ever eaten. Plus, we share a few tips about acquiring an ESTA to visit St. Kitts if you’re travelling via America. This article was written in collaboration with e-Visa. 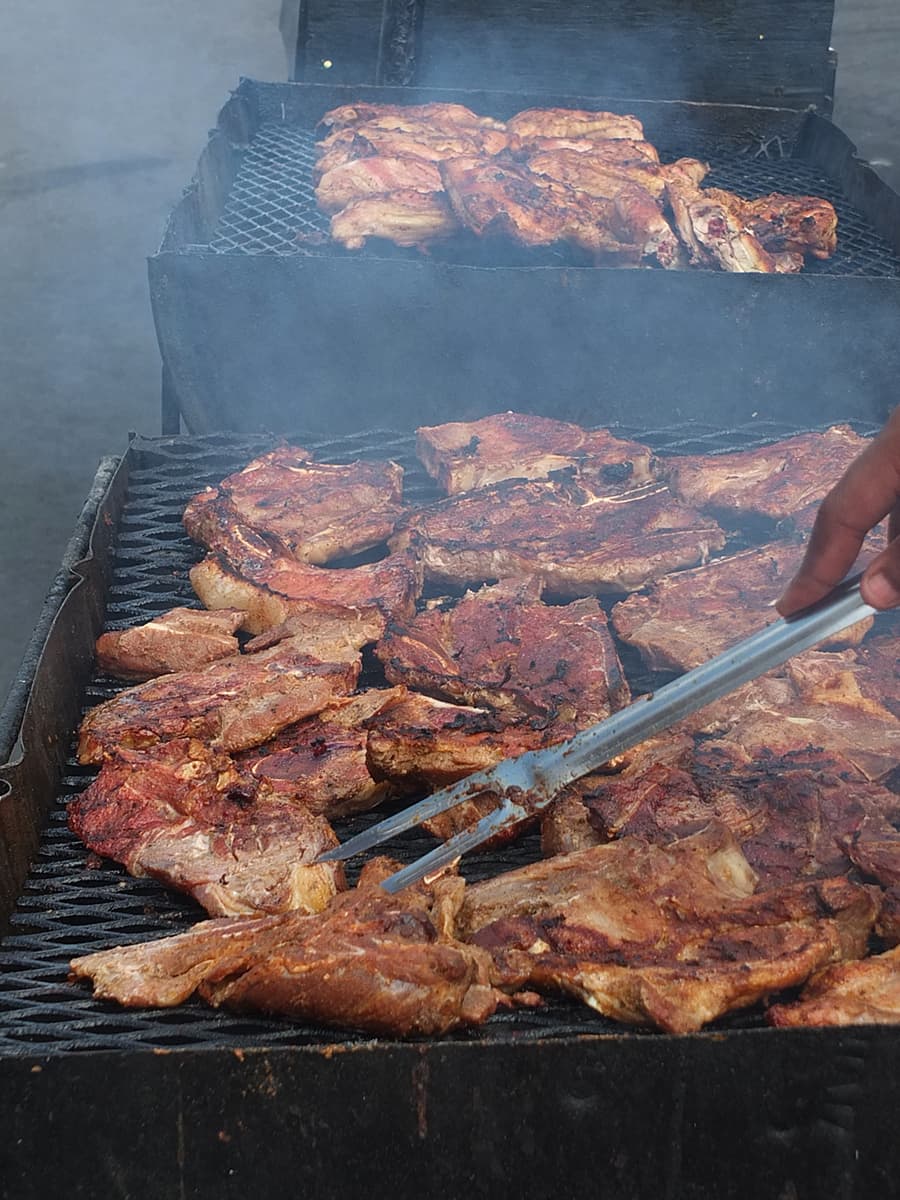 A visit to St. Kitts

Just picture it, wandering about the streets in Basseterre, the capital of St. Kitts, when the wafting aroma of barbecuing meat hits you.

As I type, it’s the middle of winter here in Shetland, and I’ve got a blanket wrapped around me as I sit on the couch with my laptop. I’m daydreaming of warmer climates, and I am salivating remembering the first glimpse I had of those black oil drum barbecues heavy with searing pork and chicken.

That meat, hot straight off the grill, was the most succulent, flavoursome barbecued meat I have ever tasted. So good I think it deserves its own blog post. 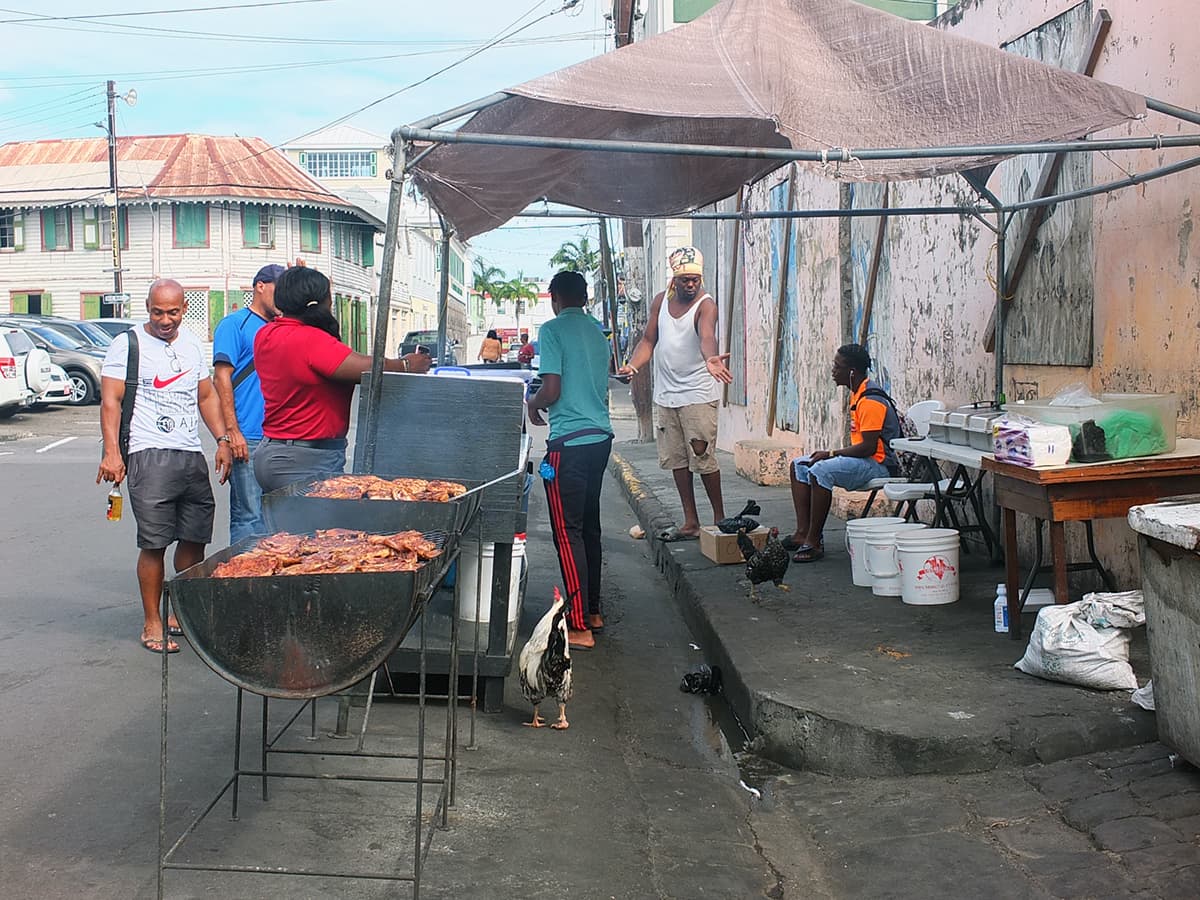 The meat was being cooked by staff from the Black Table Grill St. Kitts, a street food vendor that has been on the go in St. Kitts for over 36 years now.

Black Table Grill St. Kitts serve pork, chicken, fish and rabbit cooked outdoors on their oil drum barbecues. They’re a firm favourite with the locals, as one pointed out to me, selling out quite quickly sometimes.

Alas, the chef would not share his secret marinade recipe, but I did learn a new trick while watching them cook… barbecuing with beer. 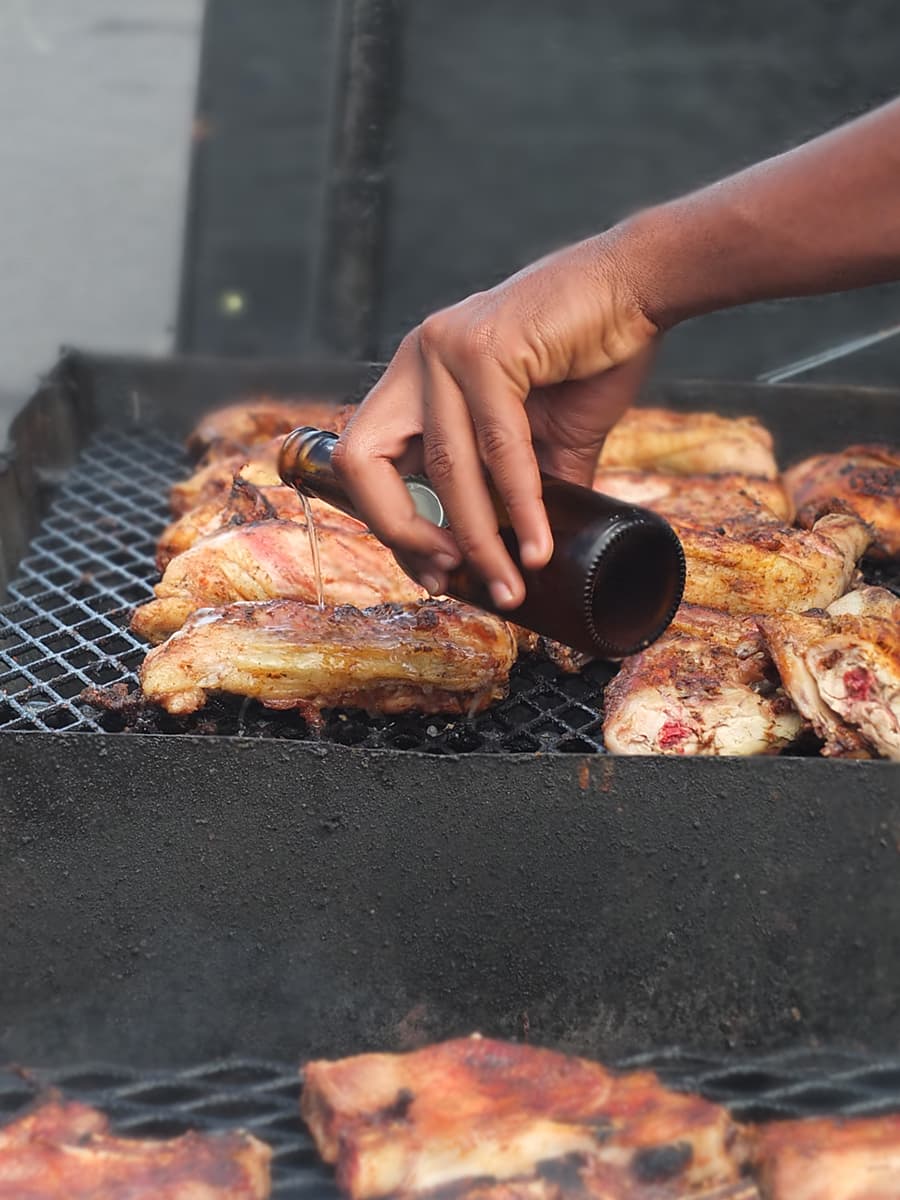 Why you should be barbecuing with beer

Beer is not just a drink to be served at a barbecue. The sugars in the beer add rich caramel colours to the finished meat. If you’re cooking pork or chicken, add light beer to your favourite marinade. Red meats will pair well with darker beers.

Use beer as a ‘mop’ to add moisture back into the meat which may have been lost during cooking, as shown in the photo above. Either pour the beer over the cooking meat or use a spray bottle to spritz the tops lightly. Take care not to pour the alcohol onto the flames.

Alternatively, add a bottle of your favourite beer to your favourite barbecue sauce. Simmer over low heat until the sauce has reduced. Make sure you reserve a little for the end of cooking too, to brush that lovely beer-glossed sauce over the meat before serving. 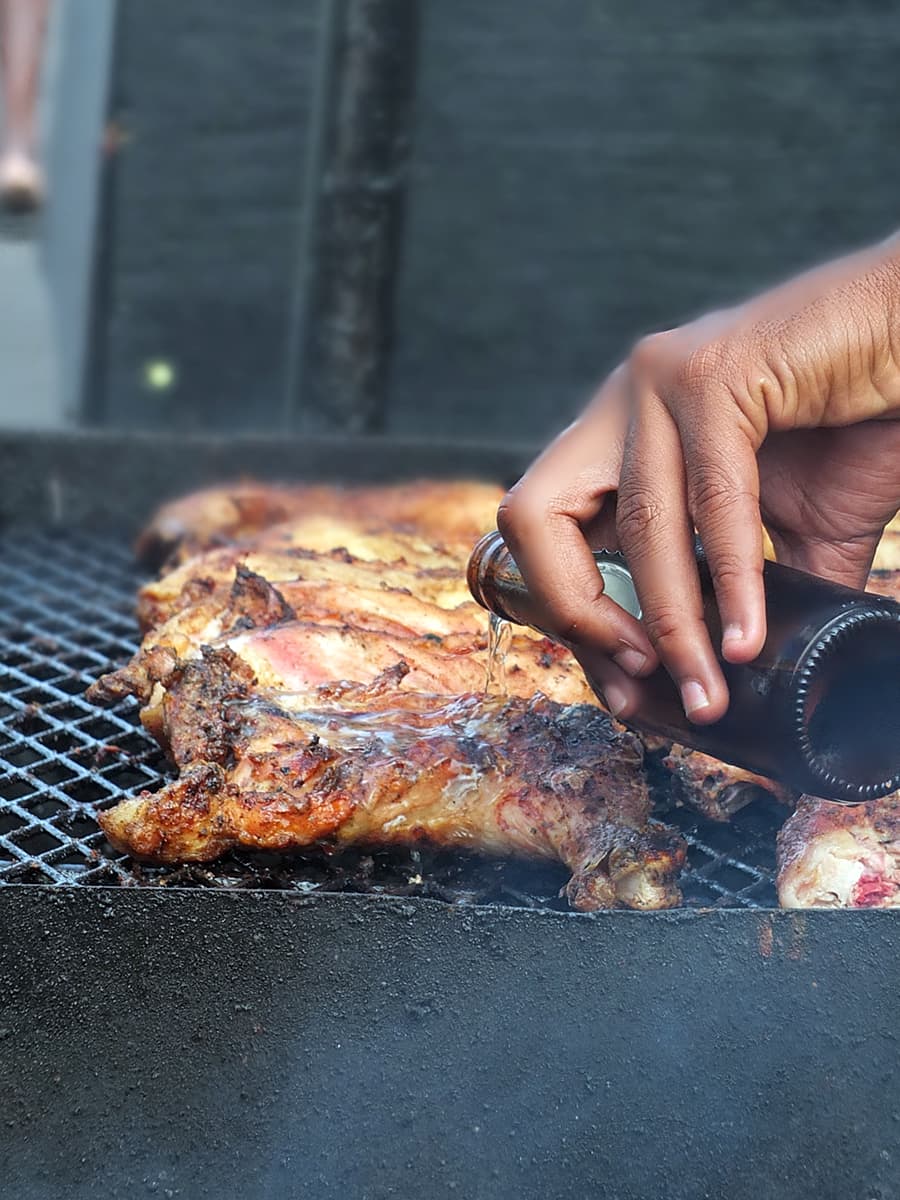 Beer contains alpha acids and tannins which break down the fibres in meat, resulting in a more tender, flavoursome finished dish. For best results, marinate for at least an hour before cooking.

Getting to St. Kitts – do I need an ESTA?

It was during a P&O Caribbean cruise where I had the opportunity to try this delicious food. Some cruise operators fly you straight into the Caribbean, so British passport holders don’t have to worry about applying for any visas. Still, sometimes you have to board your cruise ship in Miami, Florida (as I’ve also done in the past).

In this case, an ESTA is needed.

What is an ESTA?

An ESTA is an Electronic System for Travel Authorisation which determines the eligibility of travellers to visit the USA.

How can I apply for an ESTA?

You can apply for an ESTA online. An ESTA takes less than five minutes to fill out the form. The majority of ESTA applications are approved within a few minutes, although it can take up to 72 hours.

How long does an ESTA last?

An ESTA lasts for two years. 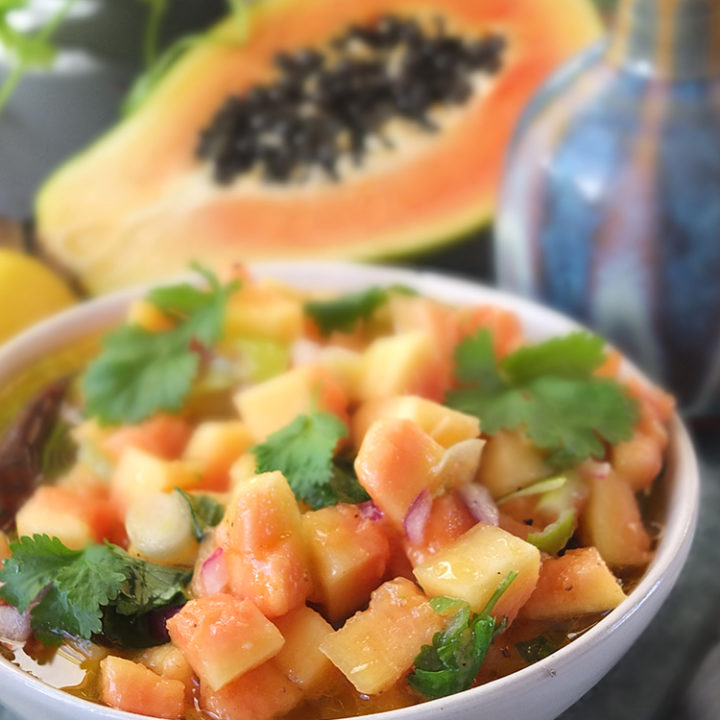 This super easy Caribbean papaya salad recipe comes from the island of St Maarten, and it tastes fantastic with BBQ chicken, shrimp or other grilled meats/seafood. With thanks to P&O Cruises for the opportunity to learn about Caribbean cuisine. 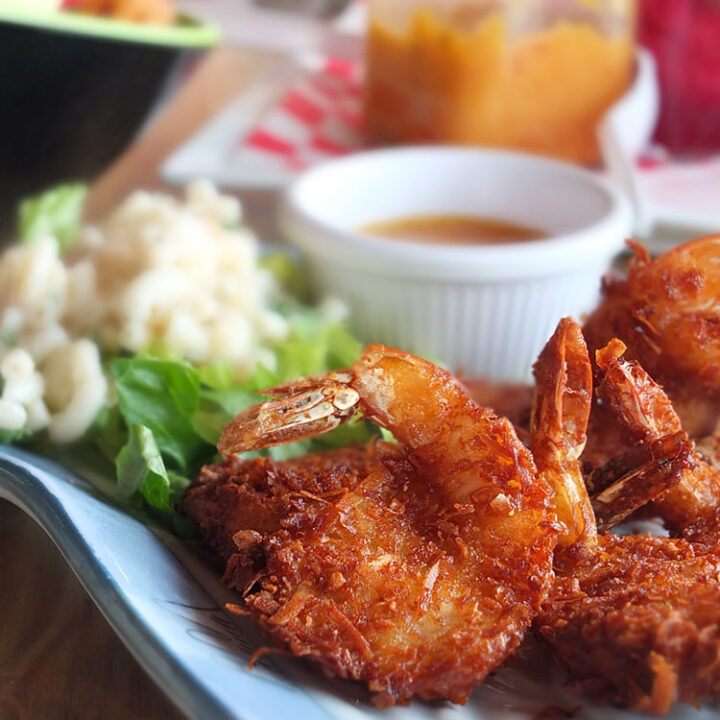 On this tiny Caribbean Island measuring only 20 miles long and 6 miles at its widest point, you’ll find over 250 different restaurants to choose from – Aruba is a foodie’s paradise! 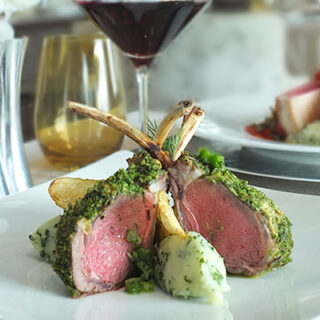 The Celebrity Equinox is a stylish 1041 foot Solstice-class cruise ship operating year-round luxury cruises to the Caribbean islands. In November of 2017, I spent five glorious nights onboard her, being wined and dined in the most exquisite of restaurants.

This is a sponsored post in collaboration with e-Visa. As always, all thoughts and opinions expressed are our own. Thank you for supporting the brands who make it possible for me to do what I love: travel and share food stories.