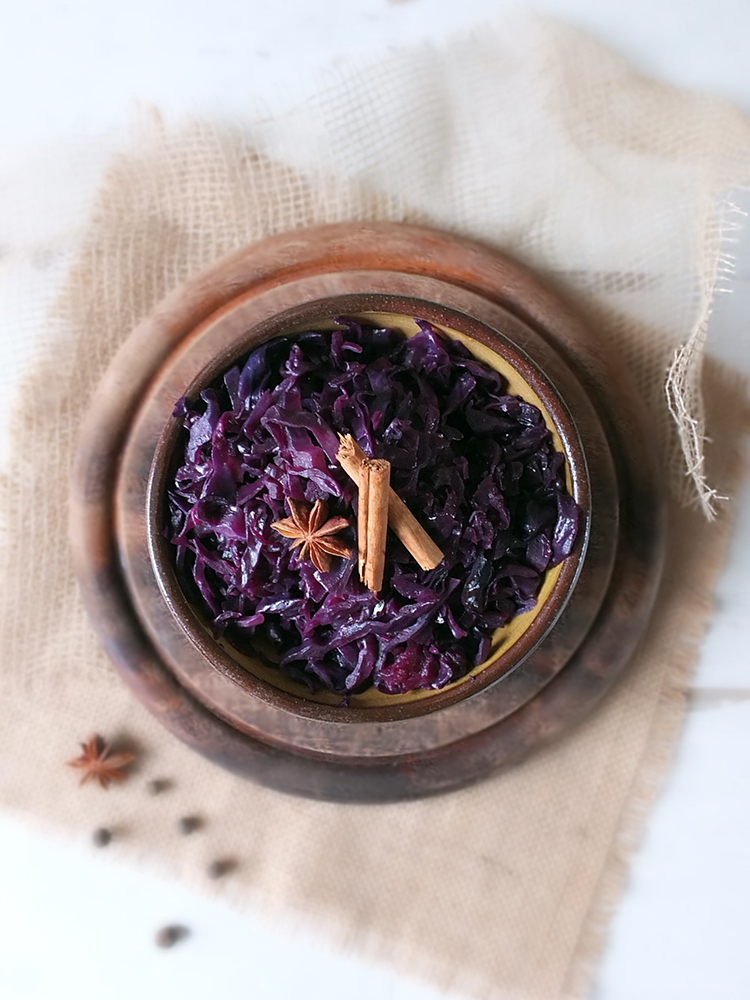 I was never really a fan of cabbage up until a few years ago. I had a fantastic Sunday dinner at Busta House Hotel in Brae, Shetland, and they served an incredibly delicious braised red cabbage on the side. I’ve been hooked ever since, especially since red cabbage often makes an appearance in my veg box this time of year.

It’s a pretty vegetable, isn’t it – with its ribbons of deep purple and white. Cutting this cabbage in half reminded me that years and years ago I’d taken a fancy to attending art college in Halifax, Nova Scotia. One of the requirements for your entry portfolio was to draw the cross section of a cabbage. I ended up not applying because they didn’t have student accommodation, and as I was only 16 the thought of living on my own in a flat in the city terrified me. 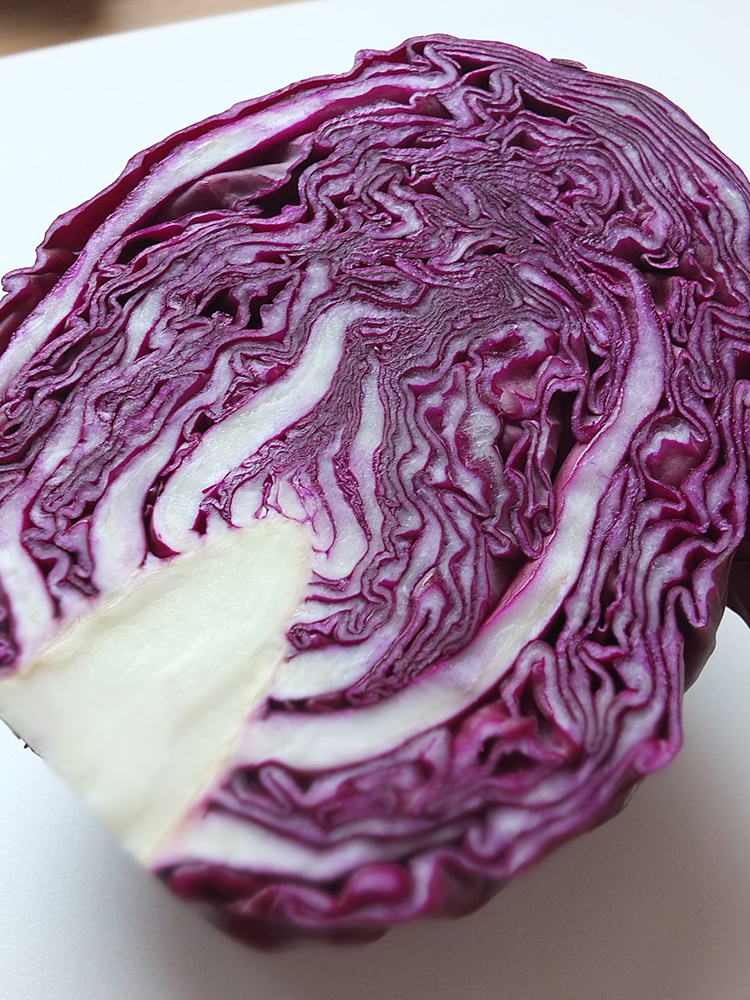 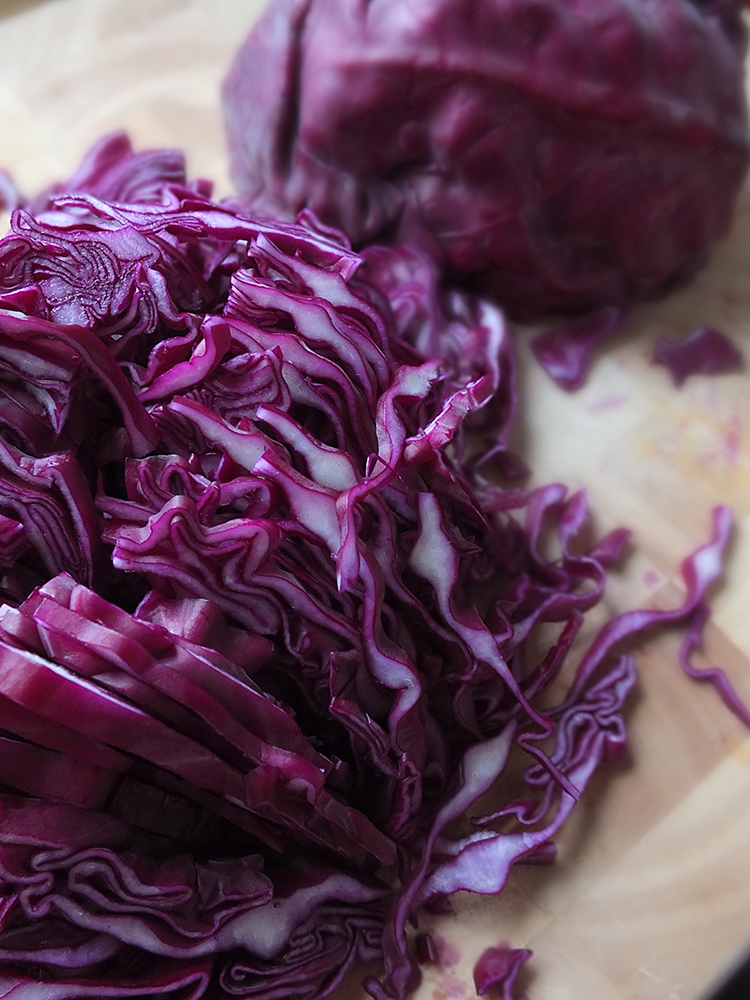 The secret to a good braised red cabbage, I believe, is slow cooking, the addition of something sweet, something sour and an apple – a sharp eating apple like a Cox or Granny Smith.

Last year, around this time, I also discovered how fantastically easy it was to make braised red cabbage in my Redmond Multicooker. Have you ever been slaving over a hot stove all day preparing a Thanksgiving or Christmas meal and wish you had an extra hob (or set of hands)? My Redmond Multicooker has come to the rescue on many such occasion! It’s an extra hob that you don’t have to worry about – a bit like a slow cooker, but with many more handy functions. 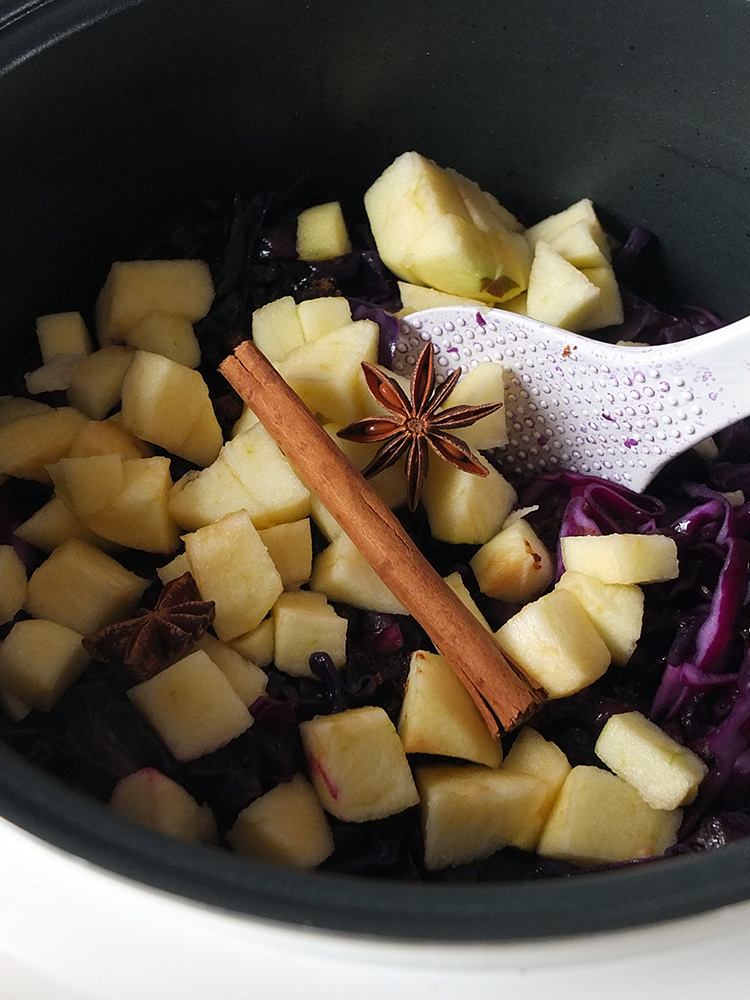 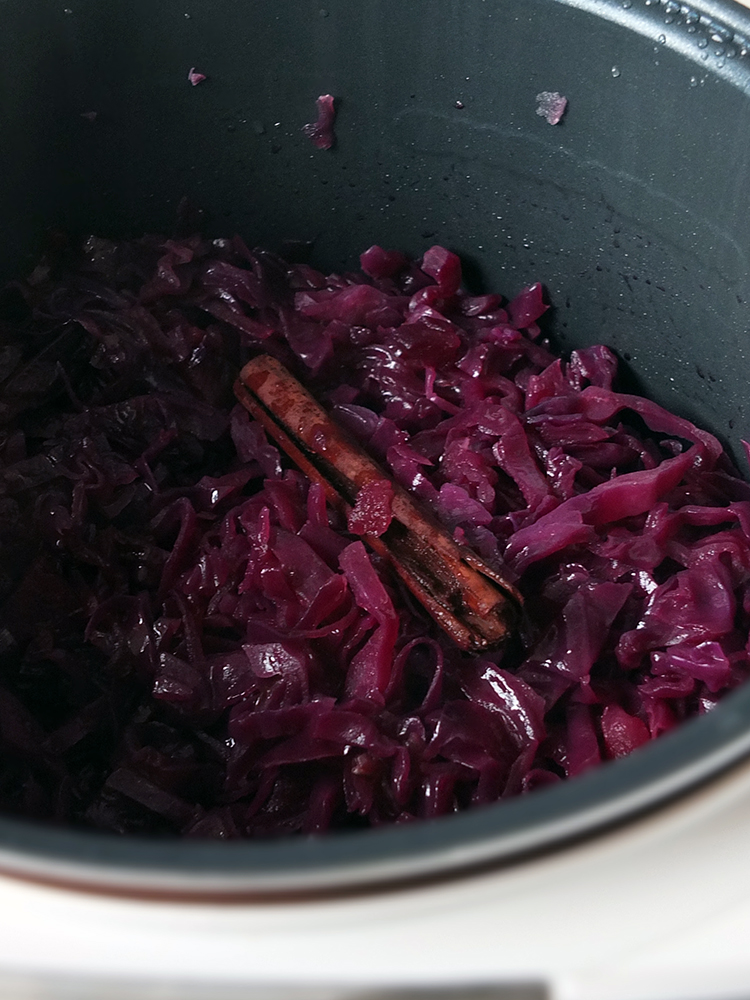 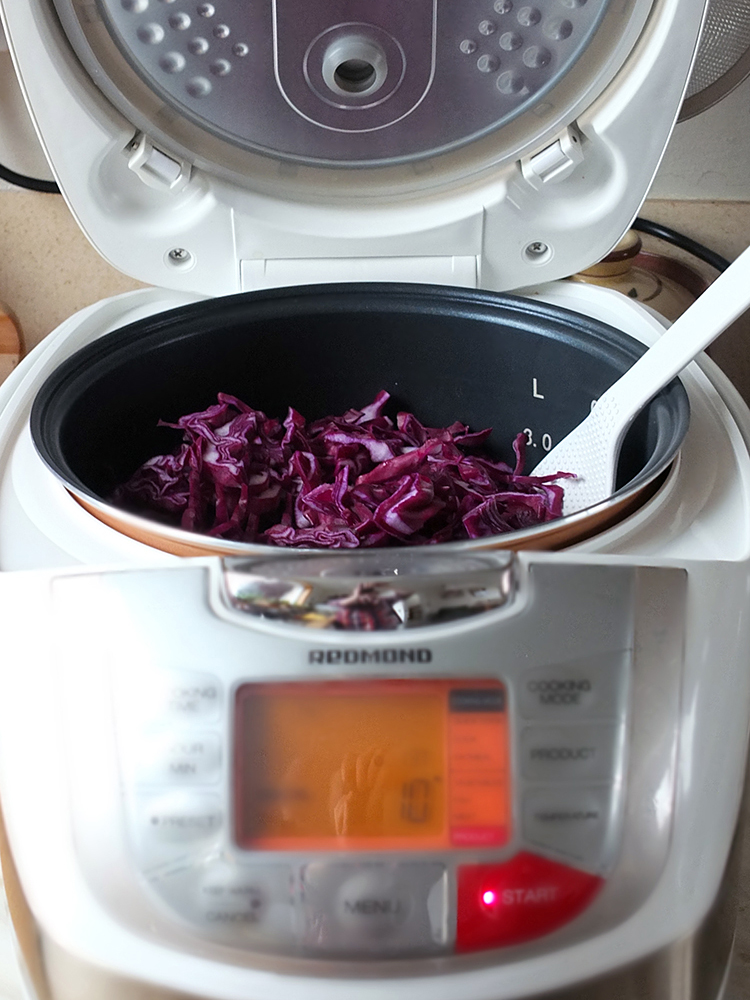 All you need to do is soften the red onion in a bit of butter for a few minutes before stirring in the rest of the ingredients, shutting the lid, and ignoring the entire thing until the recipe has cooked, leaving you free to do other things, for example, go for a walk up the hill behind your house and enjoy the view of the first snowfall of the year! 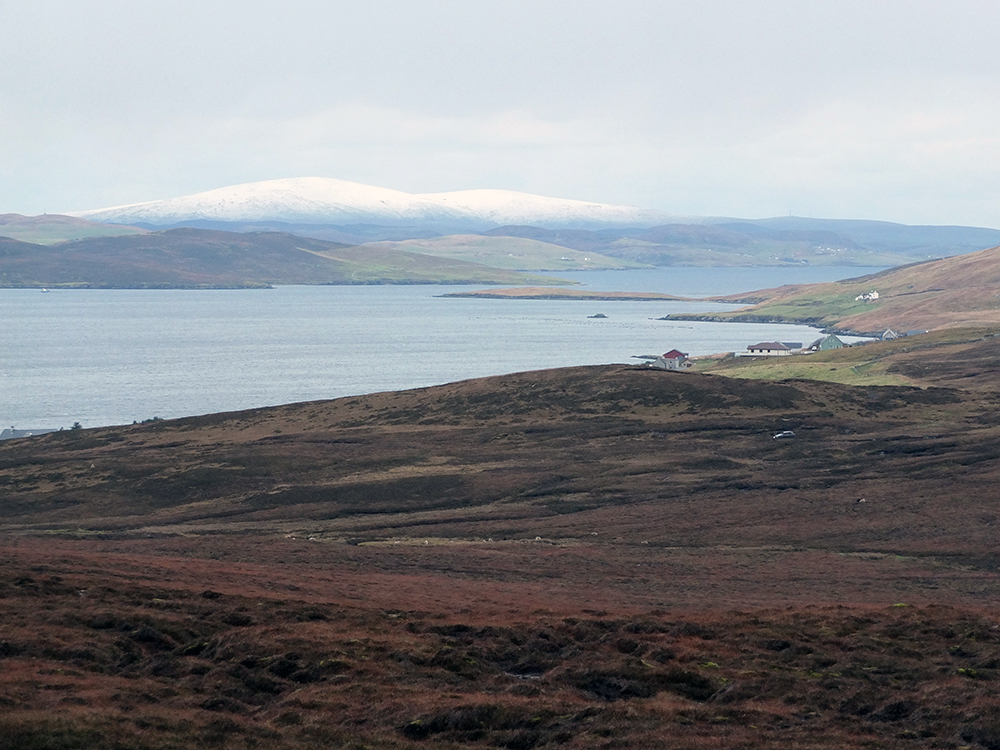 The Redmond Multicooker also has a keep warm function which automatically switches on when the automatic cooking program has finished, meaning if you’ve spent too much time up said hill (and checking in on your poorly neighbour next door) it won’t burn. 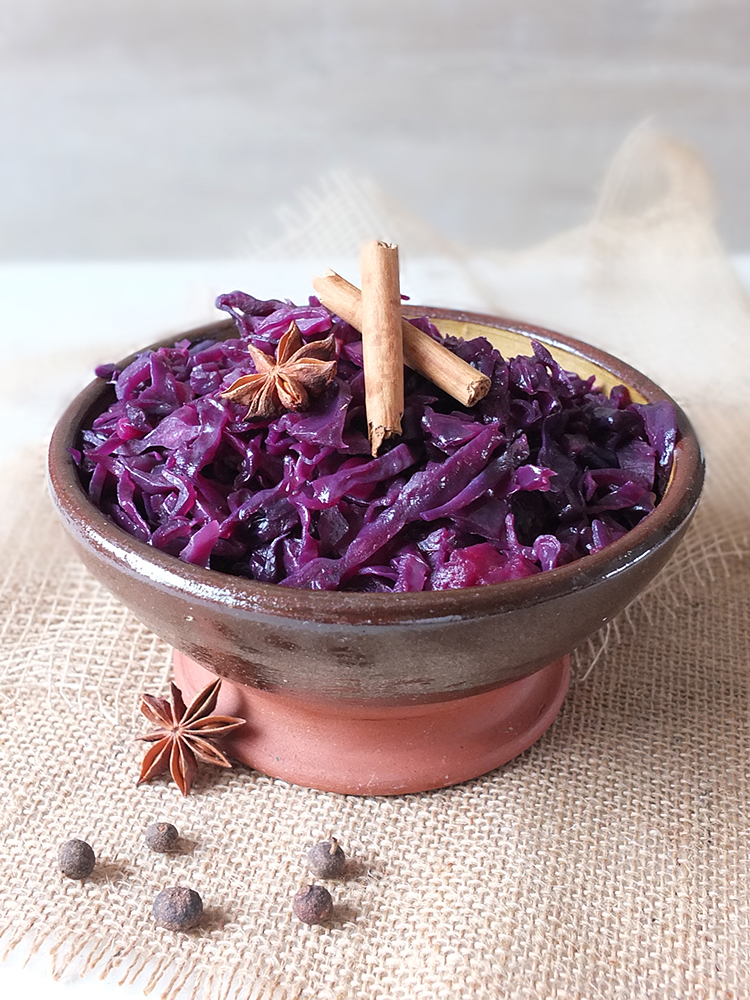 I’ve added some spices and a squeeze of orange juice to my braised cabbage recipe – a whole cinnamon stick, a few whole star anise and some whole allspice berries – just to give it that little hint of warming spice. Make sure you remove these before serving (you could even put them into a small muslin bag before cooking, to make this easier).

How do you make your braised red cabbage? Do you have any recipe tips to share? Let me know in the comments! 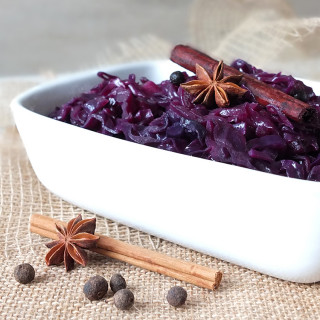 This is a commissioned recipe for Redmond Multicookers.