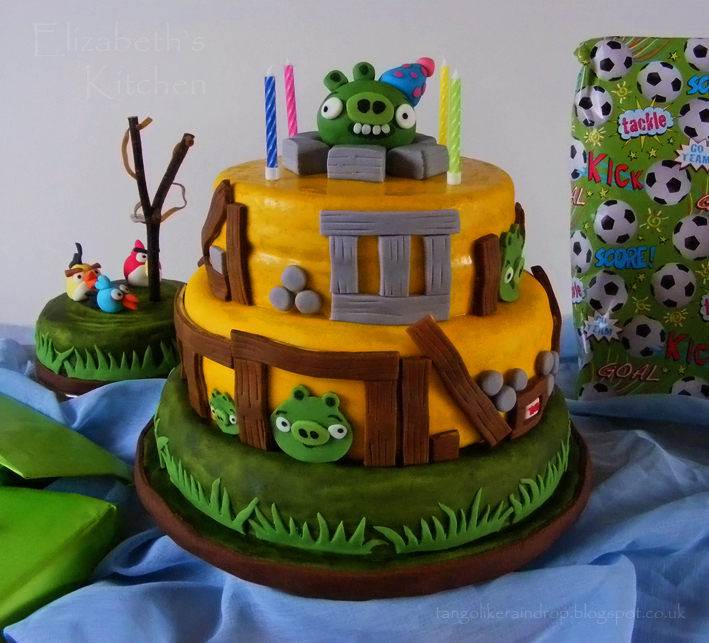 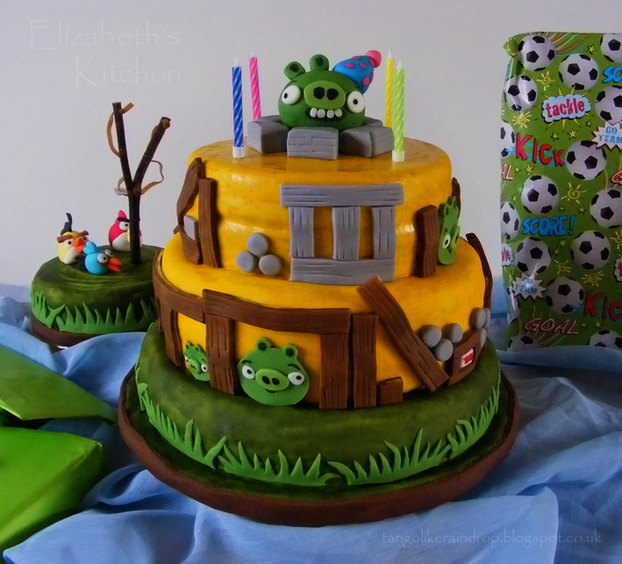 It’s hard to believe that our youngest has turned four. How the time has flown by! A few weeks ago my OH surprised me and bought me a Kindle Fire as a gift and our youngest (and the rest of us!) discovered the wonderful world of the Angry Birds app. He’s now properly Angry Birds obsessed, so what better a theme for his birthday cake could I come up with than Angry Birds! I bought 6 kg of of icing sugar for this cake. I hasten to add I didn’t use the entire 6 kg! I picked up quite an assortment of coloured sugar pastes, a modelling tool set and a cake drum from Sugar and Crumbs, some Dr. Oetker ready to roll white icing from the local supermarket and some natural food dye (‘Daffodil’ and ‘Juniper Green’ by JPE) and black and green edible food ink pens by Rainbow Dust from some other local shops and set to planning.

I figured a three tiered cake would give a fairly good 3D aspect to build the wooden boards and concrete block towers for the pigs to rest upon with the initial idea that the Angry Birds themselves would decorate the top of the cake. 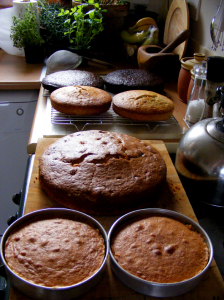 Then, the OH brought out a fantastic wooden catapult pencil he’d bought for the eldest for Christmas and then completely forgot about and my plans changed. A fourth cake would be required to showcase the Angry Birds themselves while they waited patiently to load up into the catapult and get fired across the table at the anxiously awaiting pigs.

The Angry Birds are sitting on a 6 inch in diameter cake made from Nigella Lawson’s fairy cake recipe sandwiched together with St. Dalfour sugar-free strawberry jam (as if this reduces this sugar content at all! This is our family favourite strawberry jam, so it’s what was available).

The cakes were made and assembled on day one. Boiled, cooled apricot jam was brushed over the outside of each of the cakes before applying the ready to roll white icing. In hindsight I wish I had coated the layered cakes in some butter cream as you can see the cake layers through the icing. Ach well, lesson learnt! To layer the cakes I inserted four short wooden dowel rods into the base cake and then arranged a thick 8 inch paper cake circle on the top before placing the devil’s food cake (already iced) on top. The smaller iced buttermilk cake was then placed on top of a smaller 6 inch paper cake circle. The dowel rods and cake circles help keep the cakes from sinking into each other. If my top cake was heavier I would have used dowel rods in the middle layer too. Then, using clean, unused watercolour paint brushes (stolen from DD), I painted the yellow and green food dyes onto the outside of the rolled white icing. I could have tinted the ready to roll icing itself, but I wanted to give more of a watercolour effect with the background. I think it worked. Again, in hindsight I would have used the same brand white icing for all the layers. The top layer is made from the local supermarket’s own brand of icing and it wasn’t of as good a quality as the Dr. Oetker I used for the bottom two cakes (I’d bought the cheaper brand because the supermarket had run out of Dr. Oetker). The cake is now three days old and the food dye still hasn’t completely dried on the top layer. Another lesson learnt. 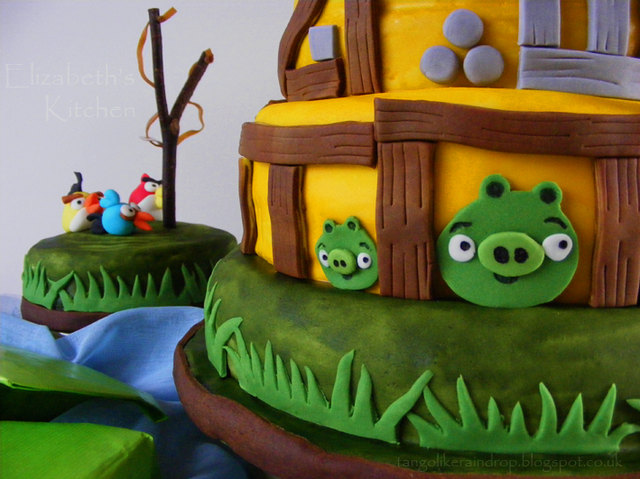 On day two I made the sugar paste decorations. I have to confess that when I started out first thing in the morning, coffee cup in hand, I had no idea where I was going with the decoration. I was faced with a giant and rather gaudy yellow and green cake with still-wet food dye painted on the outside and a stonking sinus cold to boot. I started with searching Google Images for some Angry Birds pig images while I brought the fan heater up off the floor onto the table to blast hot air directly at the cake to dry it out and I dosed myself with some Beechams Cold & Flu tablets. I found a pig image I liked in the perfect size and, using a pencil and some paper, faintly traced an outline off the screen. I also outlined the nose so that the dimensions would be right. 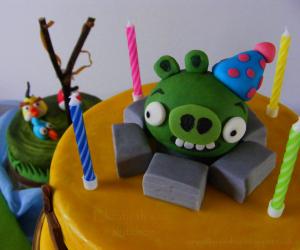 To make the pigs I rolled out some green sugar paste to 4 mm thickness and cut around the paper template with one of the modelling tools. I was really impressed at how well the sugar paste handled and how the modelling tool cut a lovely clean edge. I was starting to feel more optimistic about the whole project (I think the drugs had kicked in by then). To make the pig’s nose I blended some green sugar paste with a little yellow until it reached the right shade. Again, I was very impressed at how well the colours blended together. I used some white for the eyes, making sure each ball was the same size before flattening and adhering to the pigs face with a fingertip tipped in some clean cold water. I used the green food ink pen to draw the ears, eyebrows, nostrils and mouth on the pig and the black to make the eye dots. This was going really well, thought I.

I then had another fantastic idea (I think!). Why don’t I top the cake with a giant birthday pig wearing a party hat! Done! I sat him on some concrete blocks and made sure he was looking down at the the Angry Birds cake. The wooden boards were made using a mixture of brown and yellow sugar pastes, left not completely mixed so that you could still see veins of colour through, like wood grain. The concrete blocks were made using grey sugar paste. Using the edge of the flat modelling tool I pressed grooves into the boards and blocks for effect. Simple but effective. 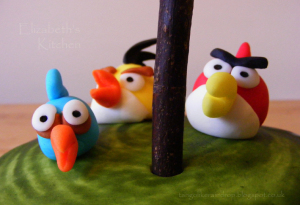 The Angry birds were made with assorted coloured sugar pastes and the straight edged modelling tool. Again, they were really easy to make. The only fiddly bit was trying to use the right amount of water to stick two bits together. Too much water and the feathers or beak would slide right off the birds. A little trial and error and it was sorted. I love how the edible black ink pen makes their eyes look so fantastic and cartoonish. 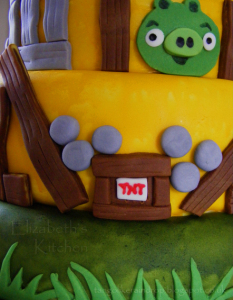 Using the remaining blended brown and a bit of Dr. Oetker ready to write red icing I made a little TNT box and placed grey stones above it, like you’d see in the game. I was pretty impressed with this bit of the decoration, to be honest!

After our youngest blew out the candles on his cake Daddy helped him fire the sugar paste Angry Birds at the pigs. It took a few goes as the birds had a tendency to fly across the room! That little catapult as some power in it – who would have thought sugar paste birds could fly so far!

In the end the Birthday Pig was defeated and all human bellies were stuffed with as much cake as they could possibly fill themselves with. The rest will, thankfully, be frozen. I made sure to use freezable recipes so we wouldn’t have to eat all the cake right away! 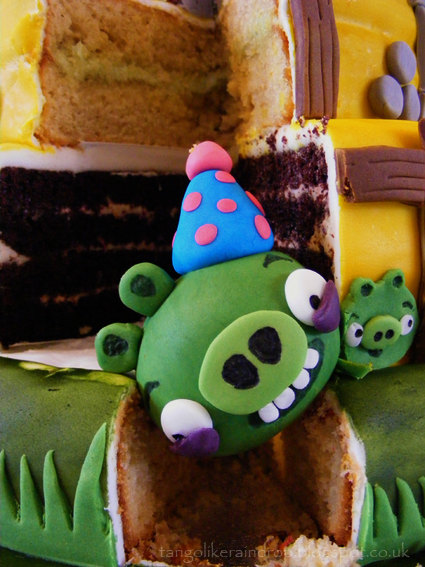 I am entering this blog post into the Alphabakes foodie round up which is alternately hosted by Ros from The More Than Occasional Baker and Caroline at Caroline Makes. This month Caroline has tasked us with baking something involving the letter ‘i’. She does say that she hopes we will come up with something a bit more inspiring than icing, and I know this cake is all about icing – but I think it’s rather Impressive Icing, wouldn’t you agree? 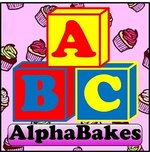 I have also included this cake in the Cake Week cake round-up by Make, Do and Push! 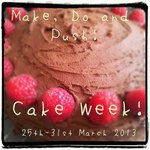 Elizabeth’s Kitchen Diary was sent a selection of Sugar and Crumbs ready to roll icing for review. All opinions expressed are our own. This is not a paid post.