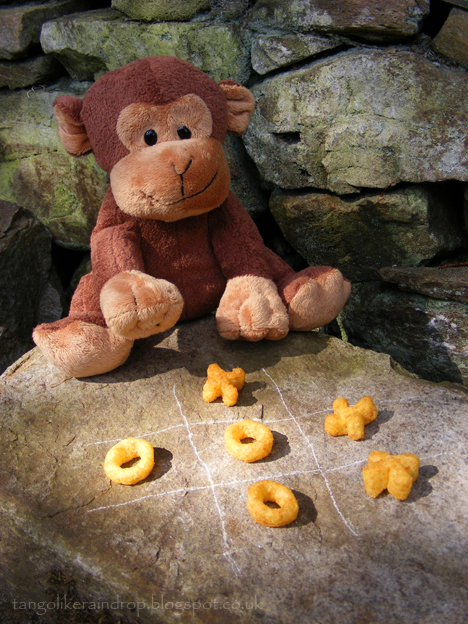 A Picnic at Kergord and a Walkers Hoops & Crosses Review #sp 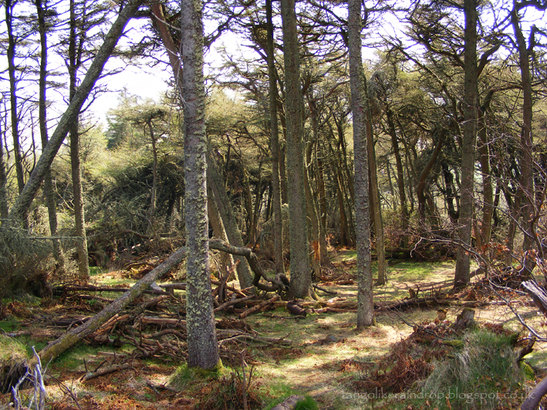 There are very few trees on Shetland.

One of the most striking things about these islands in the middle of the North Sea is the massive ever-changing sky. The low rolling hills meet the sea and they are capped with a gigantic dome of a sky. There are no trees to break up the skyline. I miss trees, a lot. I spent my Canadian childhood playing in the woods, building tree houses, falling out of trees, trying not to get lost and keeping an ever watchful eye out for the large footprints of carnivores. I’m surprised I survived! Shetland is a wonderful, safe place to raise children but the lack of trees does sometimes get to me. Roaming carnivores aside, I have longed for my children to have the opportunity to climb a tree. 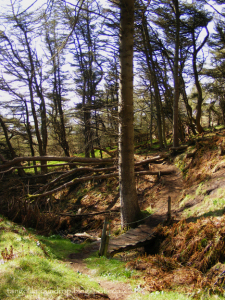 All that changed today.

There’s a place I knew about called Kergord, where there are a few small fenced in areas of deciduous trees. In one section you can drive your car through a section of trees. If you drive really slowly you can make the experience last a whole sixty seconds while you soak up the tree canopy vibes. The other groves I always thought were non accessible  Although I’ve been in this country for nearly a decade and a half I’ve not grown accustomed to the rambling rights. You can go anywhere you want? Really? Back in Canada that might get you shot (probably not but the fear was still there)! I never contemplated that I might be allowed to go onto someone elses’ property to have a little play in their trees.

A few days ago Kev over at Moder-Dye posted about his fruity bannock, cooked in a fireplace in an old ruins nestled in a magnificent forest… in Shetland! We were allowed to go into those groves?! I was so excited I just had to go for a look-see myself on the next fine day.

This morning was that day. The sun was shining as the youngest and I dropped the older children off at school. We hurriedly packed our picnic and supplies and set off for A Grand Adventure. We saw and heard all sorts on our adventure: little green shoots were forcing themselves up out of the ground as Spring has finally arrived, the wooden creak of trees swaying in the slight breeze, the heat of the sun (which in itself is a rarity in Shetland!), the mating calls of so many different birds (I even saw a goldcrest!), a carpet of fairy flax, a white-tailed bumblebee, a wooden bridge over a burbling burn, wooden ‘cabins’ to explore, including one makeshift one built around the roots of a fallen tree. My youngest spent nearly half an hour playing in amongst the roots of that fallen tree. It reminded me of my own ‘cabin’ I’d made when I was around 7, using sticks and the ‘cave’ of a fallen tree. I loved that cabin until one day, when I was away at summer camp, the neighbour’s son burned it down while playing with matches. He burned down the whole forest too. I was gutted (don’t worry, he was ok!). 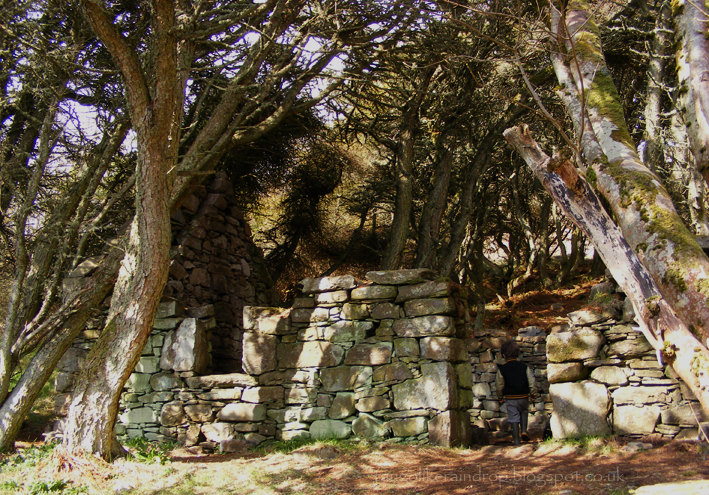 Far into the grove of trees we found the old ruins I saw in Kev’s post and we reckoned that was as good a place as any to set up our picnic lunch. Part of this picnic was a packet of roast beef flavoured Walkers baked Hoops and Crosses I’d been sent to sample and review. With this snack delivery came a lovely cuddly monkey named Monty. He had to come with us on our adventures, of course, especially since monkeys love trees as much as we do. 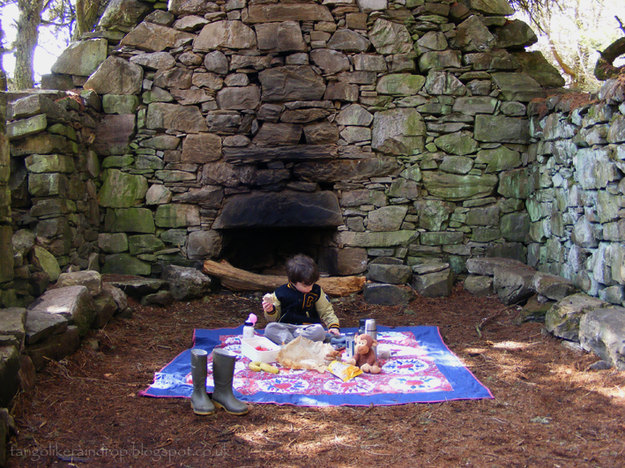 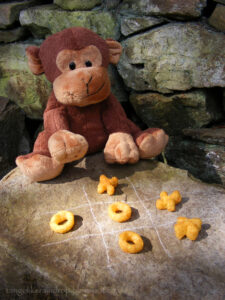 Monkeys also love playing noughts and crosses with baked crisps shaped like playing pieces. Unfortunately my four year old wasn’t fond of the crisps and quickly moved on to fresh strawberries. I didn’t get an explanation as to why he didn’t like them, but does a four year old ever give a reason for not liking a new food?

I tried the crisps myself and thought they were rather nice, but I saved the rest of the packet to test out on the older children after school. I did note that there was quite a bit of volume in the pack which only weighed 18 grams, that and the fact that a whole packet only contains 85 calories, that they’re made from wholegrains and they only have a mere 1 gram of sugar meant I filed it away as a potential guilt-free evening snack purchase for a later date. I also noted that MSG was not on the ingredients list, but I’m unsure if this is now hidden under the generic term ‘flavourings’. Although it doesn’t say on the packaging, Walkers says these snacks contain no artificial colours or preservatives. 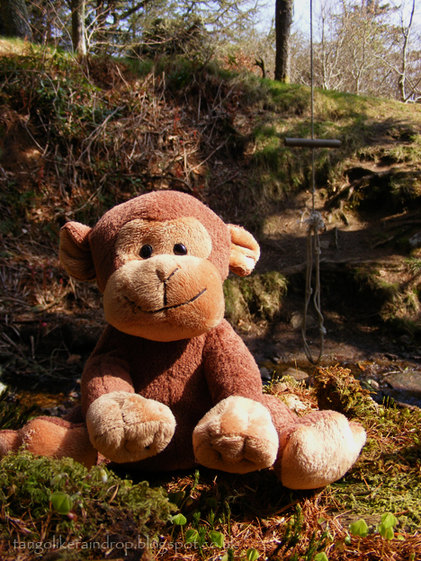 After our picnic we kept exploring. Monty even found a rope swing suspended over a burn! Two and a half hours after entering the woods at Kergord we started to make our way home. I spent most of that time following the youngest around as he explored every single nook and cranny he could find. I’m looking forward to returning many times over the summer months with the rest of the family and seeing what changes there will be once all the plant life is in full bloom. As it was today it was pretty spectacular. Standing there feeling the heat of the sun and hearing the birds and the trees and soaking up the energy I felt teary-eyed. It was magical. I am so pleased I can now bring my children somewhere they can climb trees. 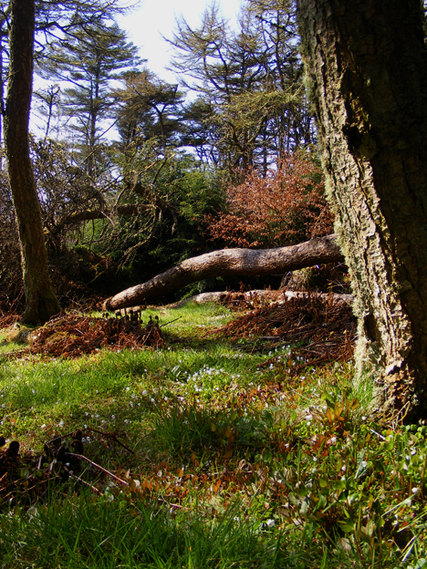 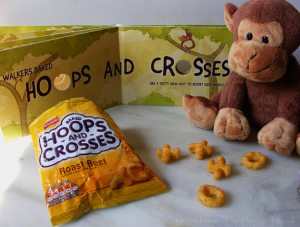 The verdict on this new type of snack from Walkers from the rest of the children? The eldest (13) refused to even try them, stating, categorically, that he does not like meat-flavoured crisps, so no he would not be trying them. In contrast, my six year old daughter absolutely loved them. They do come in two other flavours besides roast beef: salt & vinegar and prawn cocktail, which are all suitable for vegetarians (Walkers says). I do think that if I see these in my local supermarket I’ll have to pick up a bag or two, mostly for myself and my tendency for evening snacking. They’d make good school snacks as well, since there’s no rubbish in them and they’re low in sugar.

Now, one more question: are we allowed to camp anywhere we want in Scotland?! 🙂 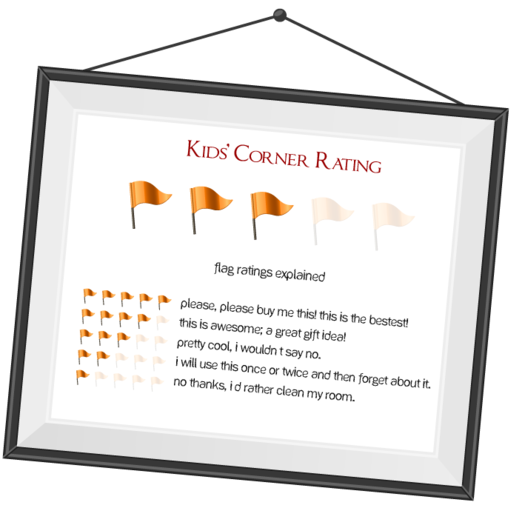 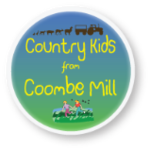 Elizabeth’s Kitchen Diary was sent a sample of Walkers Hoops and Crosses for review. All opinions are our own. This is a paid post.
Category: Adventure, Kids' Corner, Product, Review, Shetland