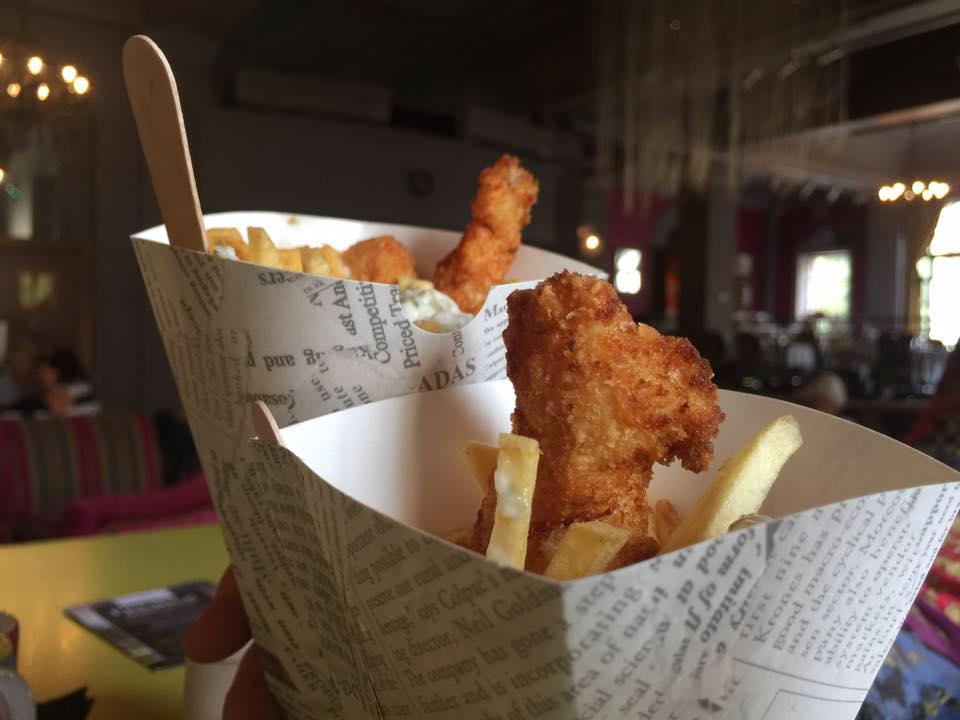 Yomp and Chomp your way through Southampton and its history! Are you hungry for food and culture in Southampton? Join their Food and Heritage tour of Southampton’s most delicious venues.  The four-hour Southampton Yomp and Chomp Walking Tour Experience is led by local, entertaining people and you will have a multi-sensory experience so you can see, taste, hear, smell and touch the fabric of the past. This is a guest pot by Tina Cresswell.

Yomp (verb): to walk or trek, military slang. Acronym: Your Own Marching Pace.

Chomp (verb): to chew with gusto 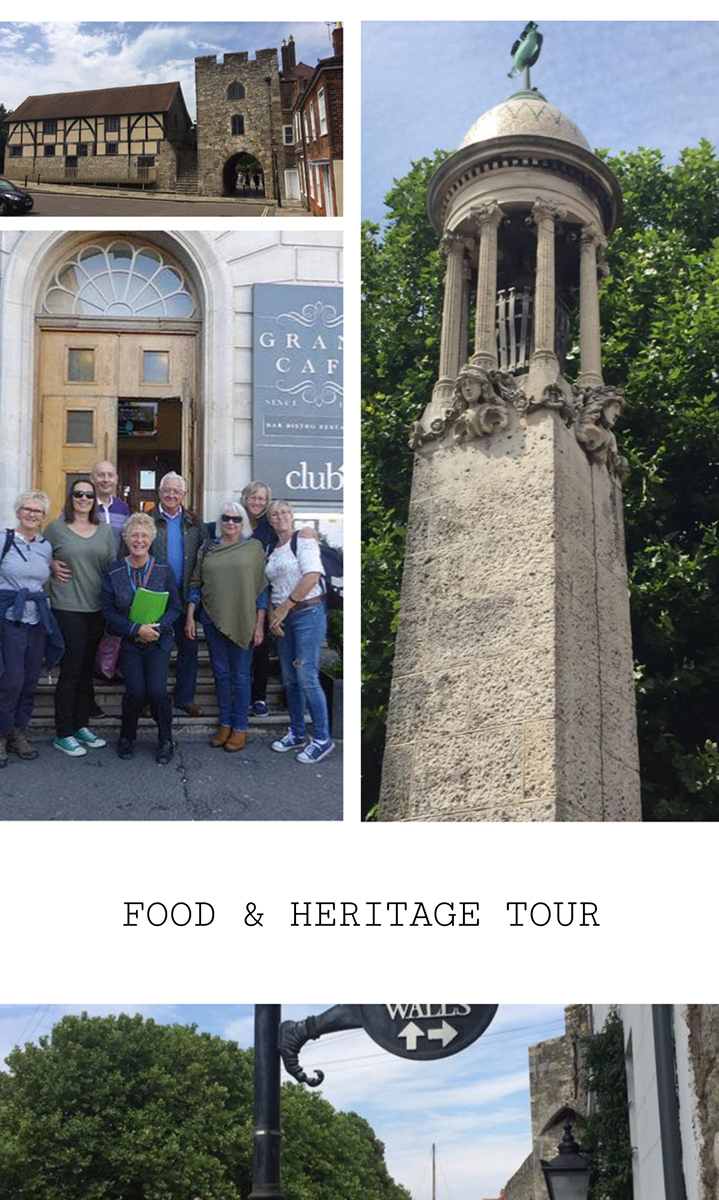 The first food & heritage tour I ever went on was last October in Aruba, touring the historic city of Oranjestad. I thoroughly enjoyed it and it really opened my eyes to how interesting and fun a food and heritage tour can be. It’s great exploring a city, but with a tour guide, it means you don’t have to carry a guidebook around with you. You can just enjoy the experience and surroundings, learning the secrets and histories of a place from someone who lives there and is passionate about it.

Yomp and Chomp in Southampton invited me to go on one of their Food & Heritage Tours of the city, but alas, I’m bunkering down for a winter here in Shetland with no plans to leave the island for the next few months. So, they’ve very kindly offered my tour to one of my UK readers to take, on my behalf – and they’ve written a bit about the city to whet your appetite!

To enter the giveaway, fill out the Rafflecopter form at the bottom of this post.

Like many port cities, Southampton has a rich and varied maritime history, but some of the ships that have set sail from Southampton harbour are so famous (or infamous) their names are known across the world.

The very name of the Mayflower is inextricably linked with the founding of a new, free colony in what was to become known as the United States of America. The ship that carried the Pilgrim Fathers from the Old World to the New set sail from the city of Southampton on 27th July 1620.

A few English towns and cities claim to have waved the Mayflower off on her trip to the New World, which seems controversial, but in fact, the ship stopped at different ports along the south coast of England before her final trip across the Atlantic. Southampton was certainly one of them, and a replica of the ship now sits atop of a memorial, on Town Quay, to mark the Pilgrims’ departure point. Southampton has certainly embraced this moment in history, with the Mayflower Park and the Mayflower Theatre both being popular attractions in the city.

Although built in Ireland, the ill-fated Titanic began her maiden (and only) voyage in Southampton. She pulled away from the White Star Dock on 10th April 1912, to make it just 5 days into the voyage before sinking, with a tragic loss of life. The majority of the ship’s crew were from Southampton, and over 500 of the city’s households lost at least one family member that day.

There is a memorial to the Titanic, and the crew who lost their lives, located within the ruins of Holy Rood Church in the city centre. You can also visit the site of the old Hotel where first-class passengers would have spent their last night on land (pictured below). At the Sea City Museum, visitors can find out more about the ship, the disaster, and the impact it had on Southampton. Exhibits include the Disaster Room, with oral testimony from survivors, an audio-visual show about the British inquiry into the sinking of the Titanic, and a 1:25 scale interactive model of the ship.

Southampton was also the home port of the QE2. Named for Queen Elizabeth II, the former Cunard flagship called at Southampton more than any other port during her active seafaring career. The ship has now been controversially sold off to a real estate developer in the United Arab Emirates, but her history lives on in Southampton. One of her huge steel anchors, weighing 13 metric tonnes, is now set as a landmark in front of Holy Rood Church, forming part of a walking path that links many of the city’s historic landmarks, known as the QE2 mile.

Yomp and Chomp your way through Southampton and its history! Are you hungry for food and culture in Southampton? Join their Food and Heritage tour of Southampton’s most delicious venues.  The four-hour Southampton Yomp and Chomp Walking Tour Experience is led by local, entertaining people and you will have a multi-sensory experience so you can see, taste, hear, smell and touch the fabric of the past.

You’ll visit six venues to taste British traditional foods and drinks, so you may want to skip your breakfast! You will hear stories of Cnut, Pirate raids, the Pilgrim Fathers and Napoleonic prisoners. Find out about Jane Austen’s time there, and about the terrible loss of the Titanic on her maiden voyage that affected so many local families.  You’ll also hear about the indomitable spirit of the people following the 1940 Blitz on Southampton.

Each tour costs £60 per person, but they’ve offered my UK readers the chance to win one! Enter the giveaway below!

Visit the Yomp and Chomp website to find out more or to book a tour.

For your chance to win a Yomp and Chomp Food & Heritage Tour of Southampton worth £60 enter using the Rafflecopter form below. Come back and tweet about the giveaway every day for more chances to win!

This giveaway is open to UK entries only. Entrants must be age 18 or over. The winner will need to respond within 28 days of being contacted; failure to do this may result in another winner being selected.

The prize is offered and provided by Yomp and Chomp.  The prize is to win a Yomp and Chomp Food & Heritage Tour of Southampton worth £60. There is no cash alternative and the prize is not transferable. The prize must be redeemed by 1 June 2019. Note, the giveaway does not cover transport/accommodation costs – it is for the four-hour walking tour only.

If you need some help using Rafflecopter, here’s a quick clip to show you how. Rafflecopter will pick the winner at random from all the entries received.

Closing date is midnight (that’s 00:00 hours, 12 am on Sunday night/Monday morning) on Monday 3 December 2018 (GMT) and the winner will be announced shortly afterwards.

Don’t forget to check out our other giveaways!

Tina Cresswell has worked in travel and tourism all her life, including stints as a flight attendant, cruise ship lecturer and freelance tour manager. She now combines her love of travel and history with her appreciation of good food and fine dining, as part owner and tour guide at Yomp and Chomp, a company offering walking tours focusing on food, history and heritage in the city of Southampton. You can visit all of the sites featured, on their Yomp and Chomp Tour, with six stops at delicious venues to refuel with the best tastes of local foods and drinks.

This is not a paid post. Photographs and text provided by Yomp and Chomp.