“This was the best birthday party I’ve ever been to!” – 8 year old party guest. 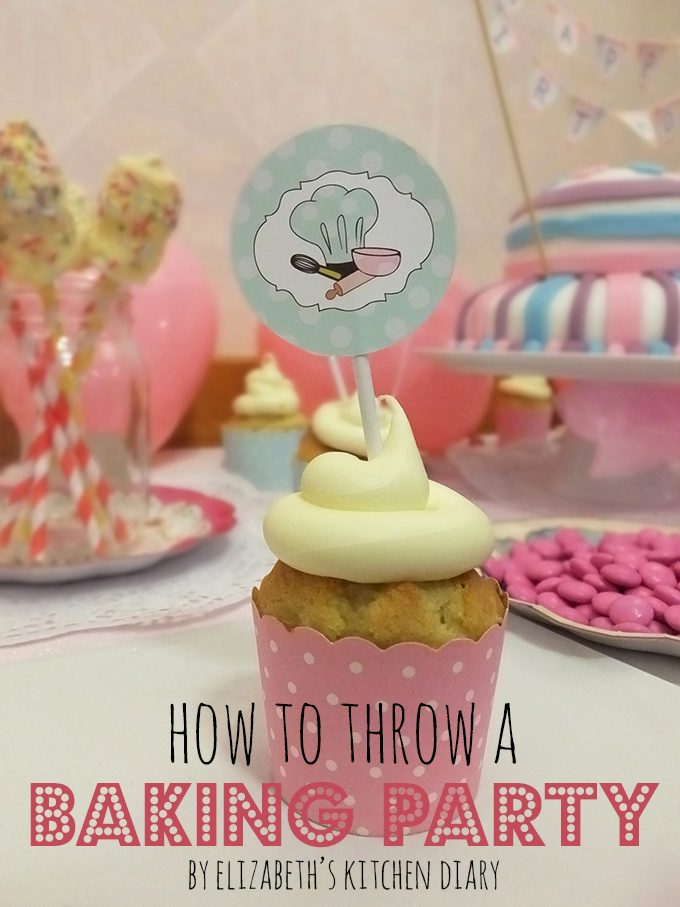 This month saw my beautiful, clever and incredibly talented daughter turn eight years old. She doesn’t get a big birthday party celebration every year, but when she does I like to try and make it a little bit extra special for her and all her friends.

Two weeks before her birthday I was contacted by the fabulous Kate over at Feather Grey Parties asking if I would like to try out some of their party supplies. What a timely email! I’d been umming and hawing about having a swimming pool party, but wasn’t completely sold on that idea. I  asked what she would suggest for an eight-year-old girl, and she suggested a baking party.

A quick look through the Feather Grey Parties website sealed the deal. A baking party it would be! 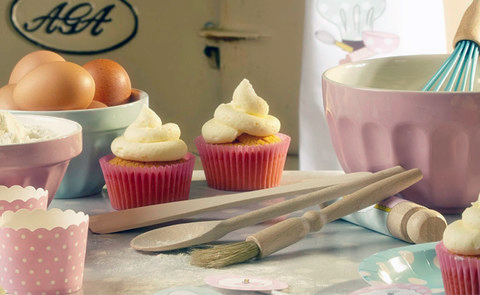 HOW TO THROW A CHILDREN’S BAKING BIRTHDAY PARTY

Plan in advance exactly what you are going to need!

Feather Grey have a fab Baking Party Kit which includes enough party pieces for 12 children: invitations, baking cups for cupcakes, cupcake toppers, party plates, matching napkins, balloons, paper straws, sprinkles and party bags with baking sticker seals. I topped this up with a few other things picked up for relatively cheap on ebay: table covers, pink organza for decorating, and lots and lots of sprinkles! 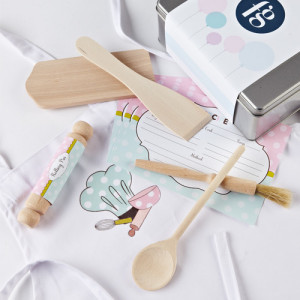 Party games? We had pass the parcel (two of them) with the prizes being boxed cupcake kits from the supermarket. Alternatively, the Feather Grey Baking Kit Gift Set (pictured right) would make a fantastic pass the parcel gift for any keen baker. It includes an apron, rolling pin, wooden spoon, pastry brush and recipe cards all in a handy little tin.

It turns out that the fabric was actually bedding sheets from a shipping company running in the 1940s or 50s! Vintage chic! I made my daughter’s apron with the Queenship Navigation Ltd. stamp in the corner, as it appeared on one of the bedsheets (the other was torn off). I picked up a couple of packs of colourful fabric markers too, so the kids could personalize their own aprons. Craft tutorial to follow.

Set up a Pinterest board to keep track of ideas. There is plenty of inspiration out there and I found Pinterest an invaluable tool. Follow my Baking Party Ideas board! 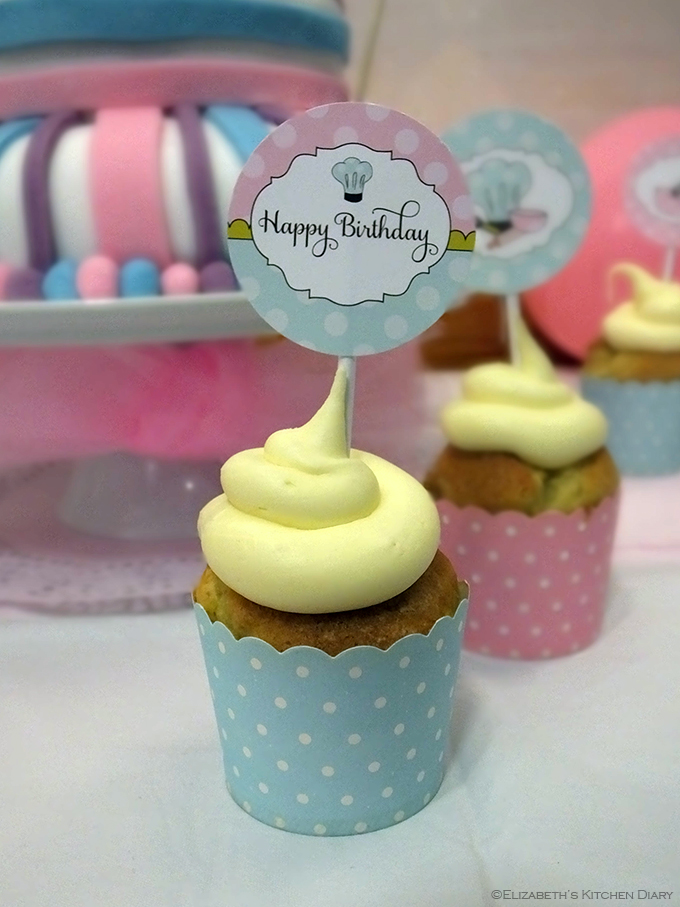 If you’re wanting a big party and you have a big kitchen that’s fine, otherwise (like me) you’re going to need to find a kitchen space! I hired the village hall for the afternoon, which included the use of their spacious kitchen.

Write up an itinerary.

This is more for your benefit than anyone else. A big party might seem daunting at first, but my itinerary really helped me. 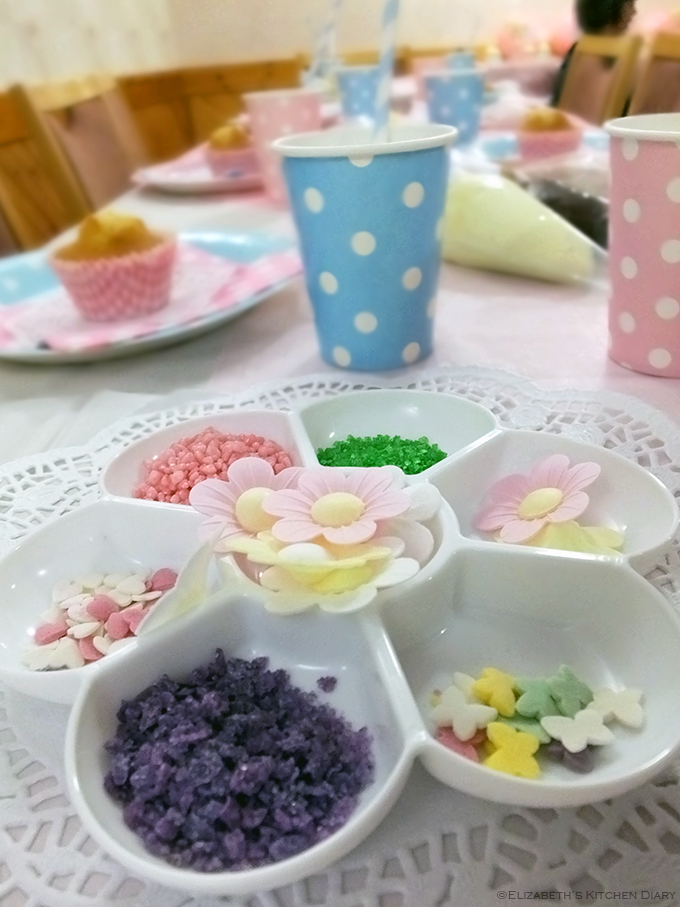 Give yourself plenty of time to set up. I learned this the hard way. We only had half an hour to set up before the party guests arrived and there were points I was actually running to try to get everything done! I laid out disposable tablecloths on the table, placed a paper plate, napkin and little paper doily for each person along with a paper cup and straw. An uniced cupcake was laid on top of each doily. Disposable plastic piping bags were filled with ready-made frosting (chocolate, vanilla and strawberry) and kept closed with a rubber band (you could decorate the closed end with ribbon or organza if you wanted). The ends were not snipped open until the kids were ready to decorate.

So, on the day after everyone has arrived, have the children choose an apron (if using) wash their hands and head to the kitchen. 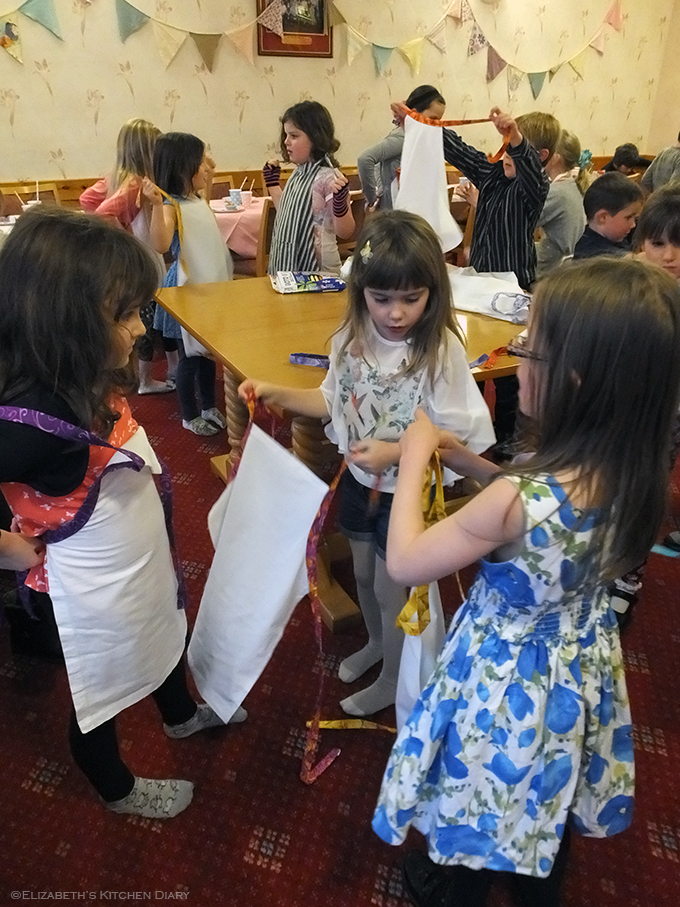 Make sure your kitchen area has all the ingredients laid out in small bowls, and plenty of tablespoon measures. Borrow some from friends if you need (as they can be a bit expensive to buy brand new).

For your convenience, I’ve provided the recipe with the instructions I gave below. This will suit any size group. You could always instruct the children as a Simon Says game to make it more interesting. 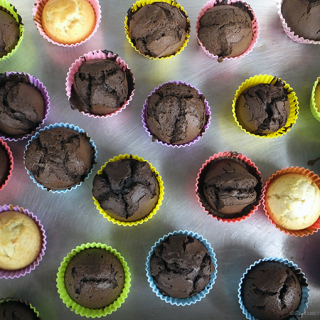 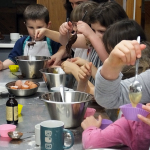 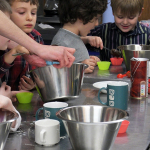 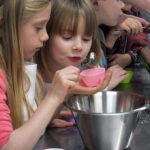 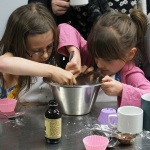 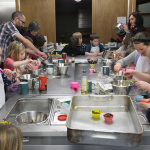 I was really impressed at how smoothly everything went in the kitchen, but I had a few fantastic parent helpers. The kids were really enjoying what they were doing, and the looks of concentration on some of their faces were so amusing!

Afterwards, while the cupcakes are baking (under adult supervision – set a timer if you’re forgetful like me!) have the children wash their hands and head to the party table where the undecorated cupcakes have already been laid out.

Let them have at and admire their creations! 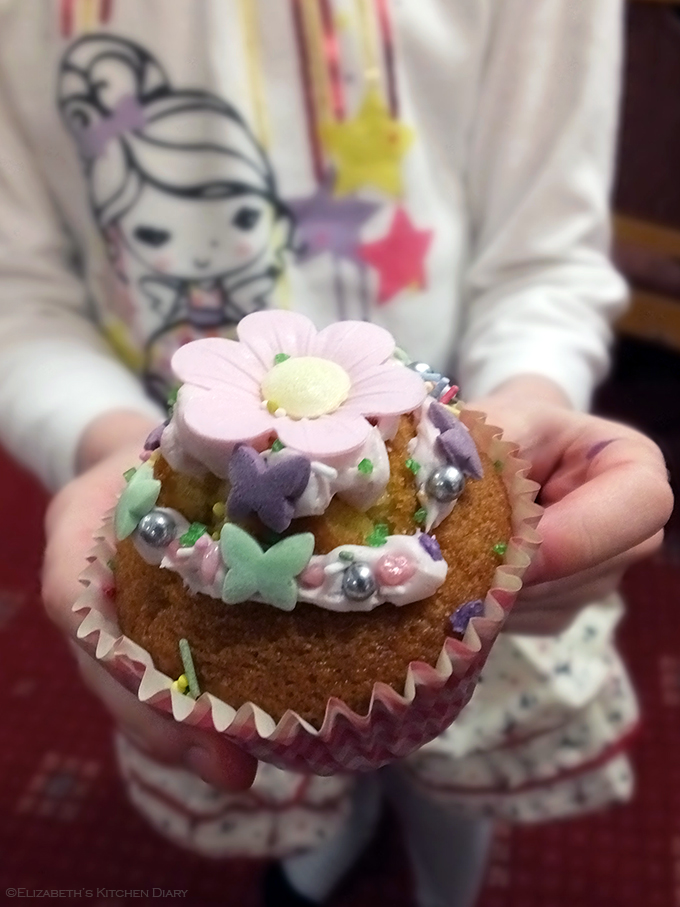 Then, after they are done decorating, it’s snack time.

I had two separate tables, one set up with the cake and all the sweets, the other laid out with savoury snacks and drinks. Pink lemonade comes into its own here!

The children loved decorating their aprons, boys and girls alike. 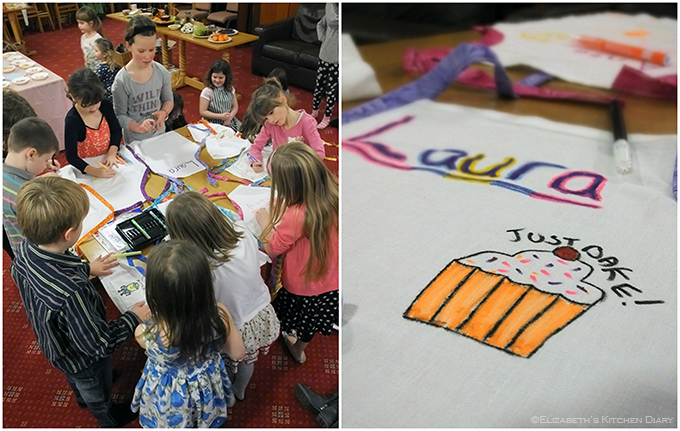 If I am, to be honest, I would have liked to have doubled the time we had for this party. Two hours just flew by and the kids (and adults) had so much fun; it would have been easy to fill another couple of hours.

When it came to home time, each of the children was given the cupcake they made in their polka dot Feather Grey Baking Party bag sealed with a sticker. I hoped that giving them each a wooden spoon with a recipe, an apron and a silicone cupcake mould of their own might encourage them to bake themselves, and it says! DD has said her classmates have been asking for the cupcake recipe, so I think when it comes time to send out the thank you notes for the birthday gifts I will include a cupcake recipe too.

All in all, it was a resounding success and I’m glad I put the effort in. The Feather Grey Baking Party supplies really helped make this party something special. I love their whole range – everything you need for a themed birthday party all in one place. All their party stationery is their own design, and the pastel colours and cute baking party images were a real hit. As the children left they were bursting with energy (ok, that might have been a sugar high!) and filled with compliments about the day. A week later and they are still talking about it! 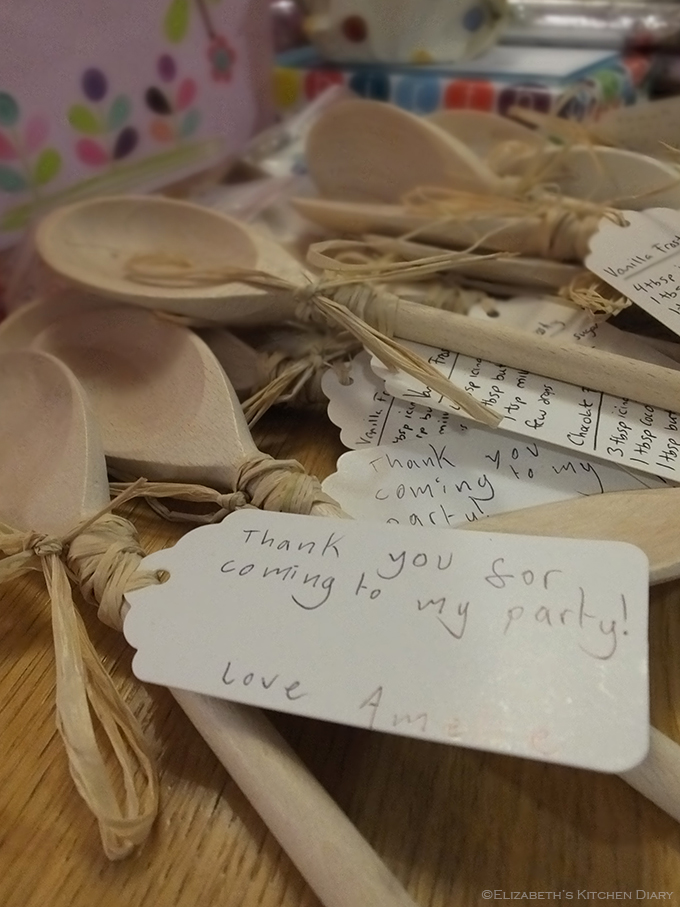 Elizabeth’s Kitchen Diary was sent a selection of Feather Grey Birthday Baking Party supplies for review. All opinions expressed are our own and this is not a paid post. All parents of children at the party gave their consent for photographs to be taken and used in this blog post. 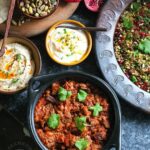 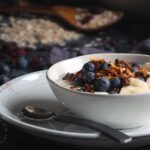