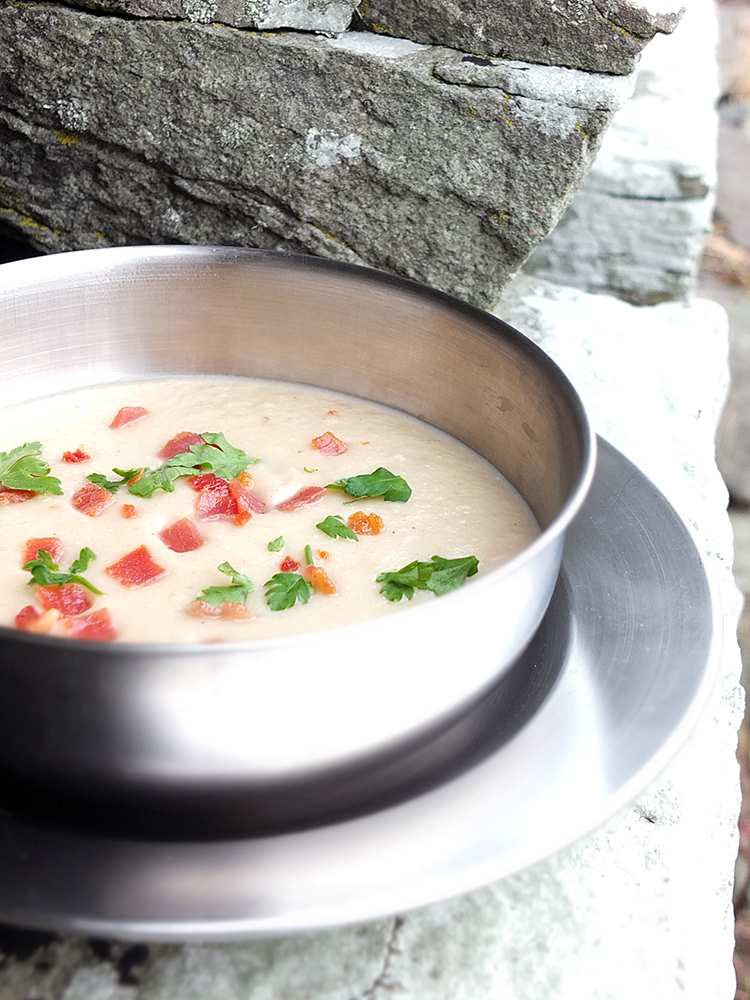 “Mum, you should make this soup in a restaurant! It’s SO good!” This thick, creamy and delicious cauliflower soup is made with bacon and leftover Christmas brie; perfect for pouring into a soup flask and taking on an adventure.

Random fact #1: my husband qualified to play at the Norsk Bordtennis Mesterskap (Norwegian Table Tennis Championship) when he was 15 years old. He never made it to the second round, but at the age of (nearly) 40, he’s still rather proud of the fact he even made it to the finals.

Random fact #2: Our ten-year-old daughter takes fencing classes. She’s only pint-sized, but she’s got enough confidence to wield the foil and ‘stick them with the pointy end’. In fact, she’s really rather good at it.

Next door to the fencing class, my husband discovered with great delight, people were playing table tennis. Out of curiosity, poked his nose in and, well, suffice to say he’s rekindled his childhood passion for the sport.

This means that every weekend he takes a drive down to the south mainland where the table tennis team practise for a few hours. I don’t travel to the south mainland very often due to the price of fuel and time it takes to get there, but given that he’s taking this trip anyway the kids and I take the opportunity to join him and go on a little adventure to somewhere new, weather permitting. 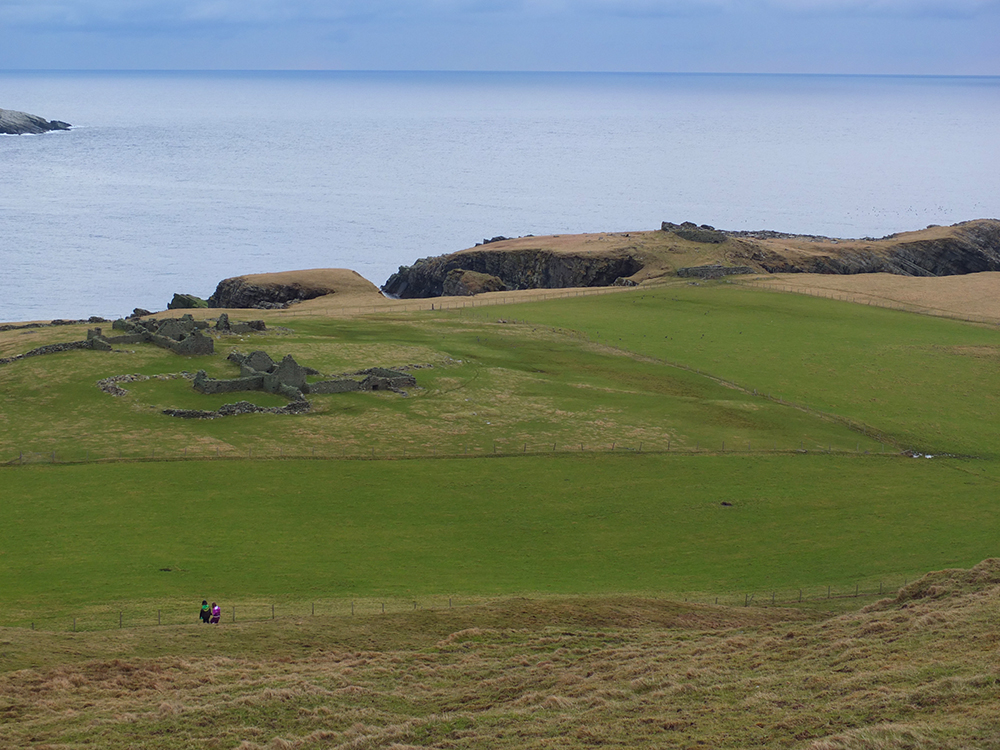 Sometime over the Christmas and New Year holidays while the winter gales were howling, I sat down by my oversized coffee table with my stack of Ordnance Survey maps of Shetland and highlighted all the marked standing stones in pink, and as an afterthought, since I was scrutinising the maps, I marked all the brochs in yellow. Ideas for future exploration when the weather improved.

In case you’re not familiar with brochs, they are Iron-Age drystone hollow-walled structures only found in Scotland. The Shetland Amenity Trust lists approximately 120 candidate sites for brochs around our tiny 80 x 35-mile group of islands. Most of them are toppled and buried, but a few good preserved examples remain.

I checked out the sites I’d marked on the map near to where my husband was to be practising table tennis. Spoiled for choice, we opted for the Broch of Burraland located on a tiny outcrop of land called Hoga, just across the Mousa Sound and the island of Mousa. Mousa is home to the finest preserved broch (pictured below), and it is one of the best preserved prehistoric buildings in Europe. 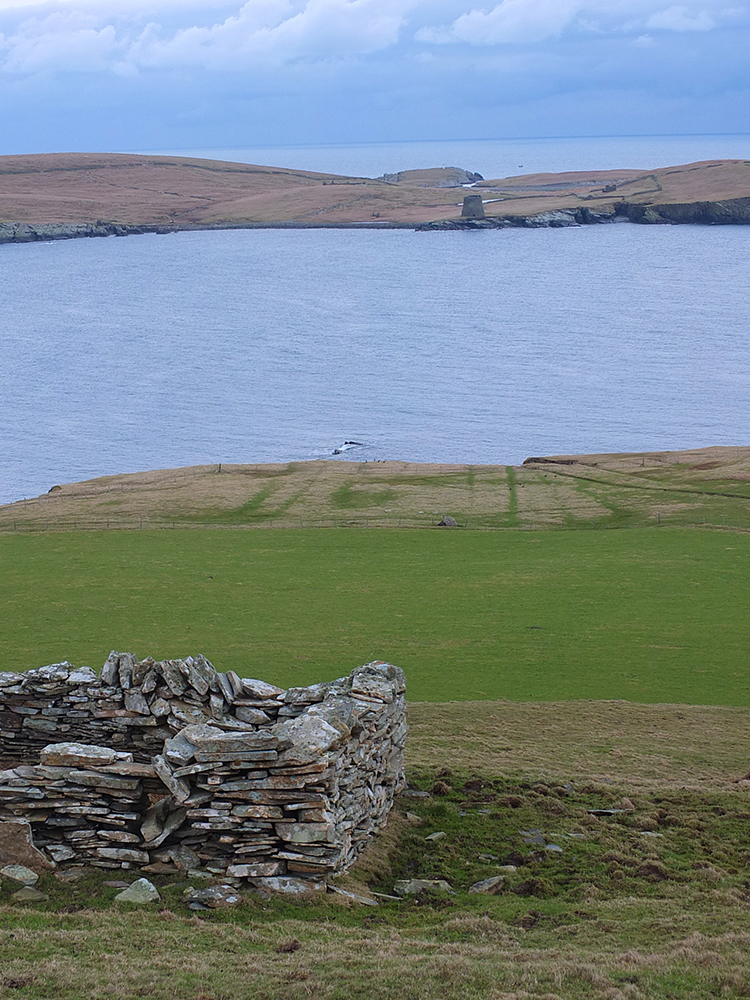 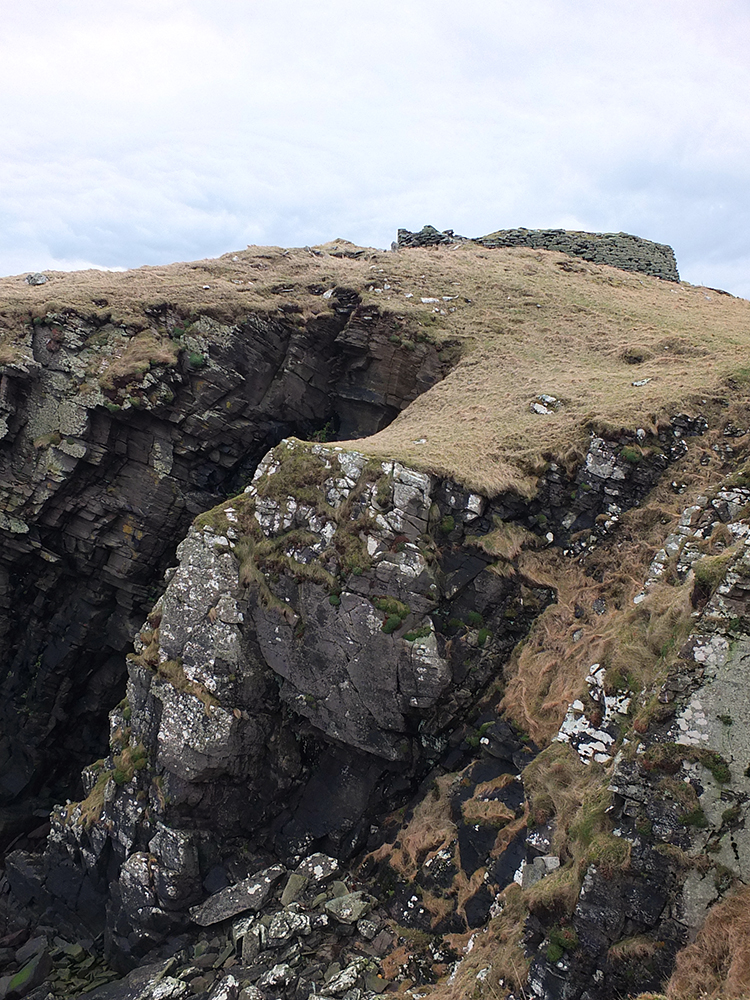 It’s a pretty interesting spot, this. You get to the broch by crossing over a narrow neck of land and there are steep bird-filled cliffs around you. The fulmars weren’t particularly pleased with us being so close to their nests, but once we found a spot out of the wind by the broch to sit and eat our picnic lunch they stopped complaining.

I’d made some soup earlier that morning deliberately to use up the last little bit of Christmas Brie left in the fridge. I also wanted to use up the cauliflower which I had intended on turning into cauliflower rice for a lower calorie option after my indulgences of Christmas and New Year, but do you know what? I don’t actually like cauliflower rice. I’d rather just eat proper food and go for a walk to burn off the calories. Besides… bacon… and cheese… mmm! 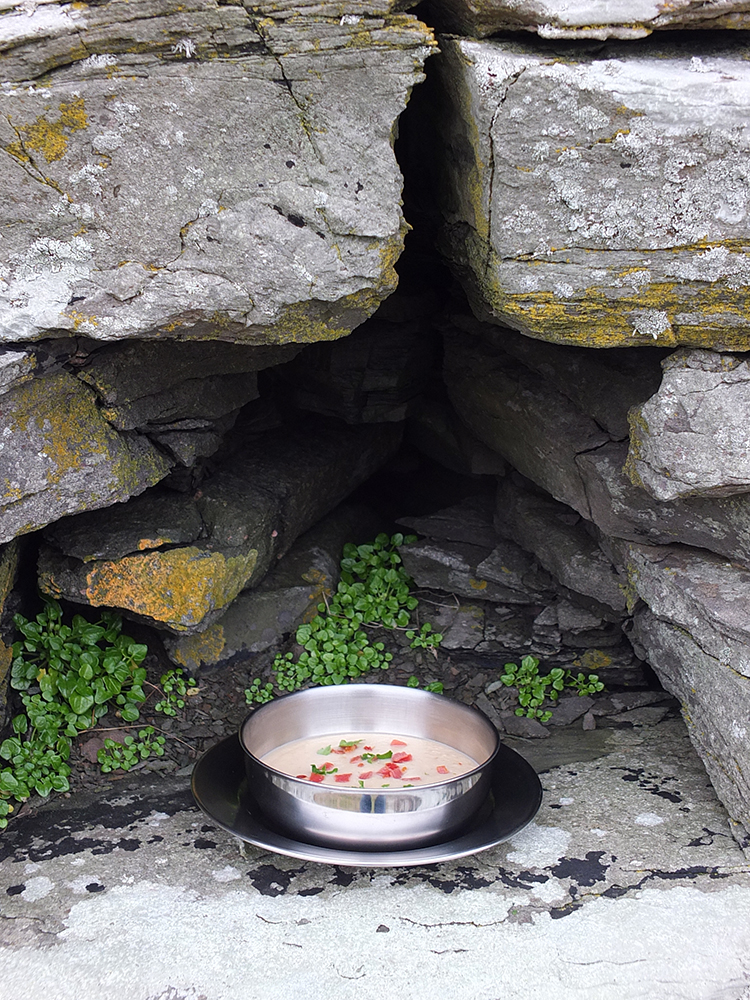 It’s still only January, but look at the little peeps of new green growth already! The daffodils have already begun to poke out of the ground and some of the trees are even budding. It’s been an unseasonably mild winter, to be honest, with temperatures frequently reaching 10 degrees C.

This soup though, it is so good, as confirmed by our rather fussy seven-year-old who has no qualms about telling me he doesn’t like my cooking. This recipe, he stated with enthusiasm, should be served in restaurants. I might have beamed a great big smile. 🙂 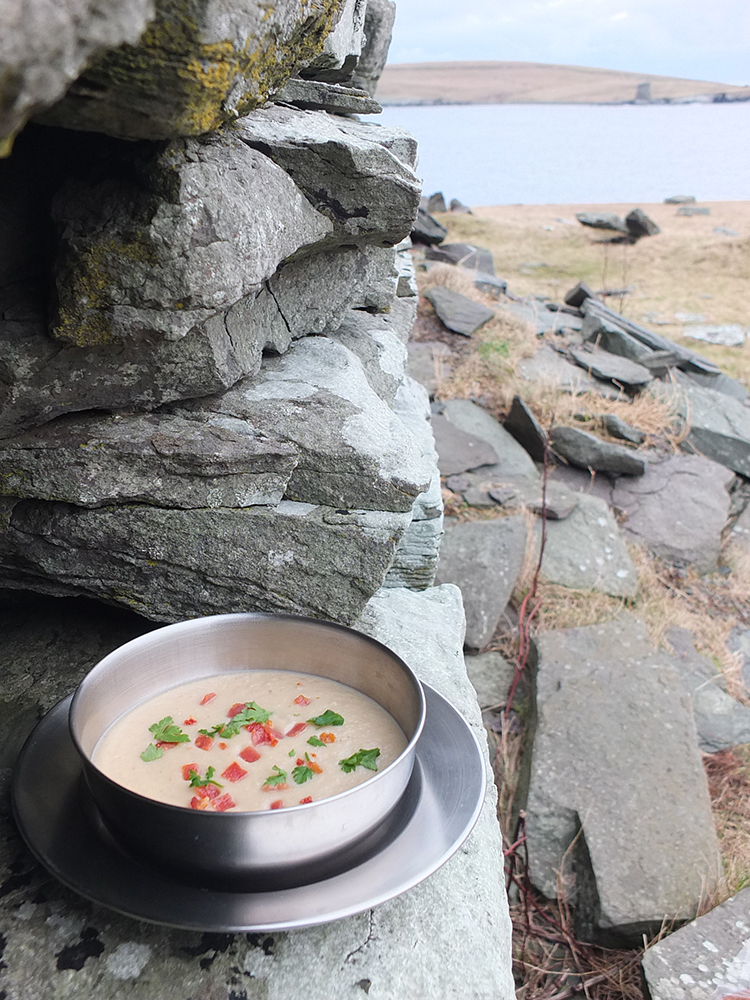 We had a rather enjoyable lunch by the broch, eating our soup, nibbling on some beremeal bread from the Quernstone Bakery and drinking cups of tea. This is a place I’d like to explore in more detail, but we didn’t have a lot of time on this particular visit.

On our way to the broch we climbed to the trig point of a nearby hill, a particularly scenic view (my Fitbit says we did 100 floors that day!) but on the way back we took the coastal route along a crofter’s track back to the car. 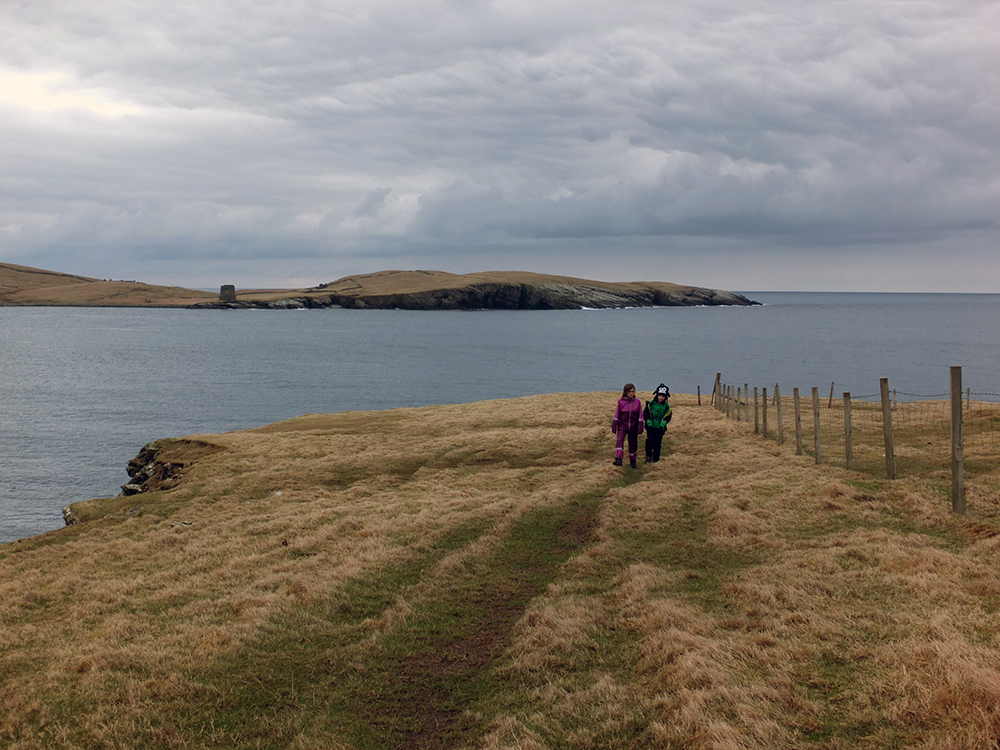 Despite the heavy cloud, it stayed dry for our walk, and the soup warmed our bellies quite nicely.

I made this soup thick and creamy with the addition of potato. I find that’s a really good way to add some hearty substance to a broth which might otherwise end up too thin. Despite the addition of butter, bacon and cheese to this recipe, the calorie count only comes in at 280 per bowl, easily burned off by climbing 100 floors in one day!

Have you ever visited any of the brochs in Shetland? Where should we go on our next adventure? Let me know in the comments! 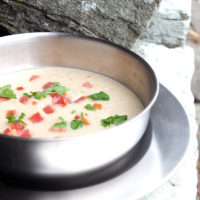 Click here to view the Nutrition Facts for this recipe, as calculated on My Fitness Pal.

This is not a paid post although it does contain affiliate links. If you click on any of the orange links and make any subsequent purchase within the following 24 hours we will earn a small commission from Amazon.

Argentine Inspired Lamb Chops with Chimichurri
Next Post: The #NoWasteFoodChallenge Round Up & Feb Linky