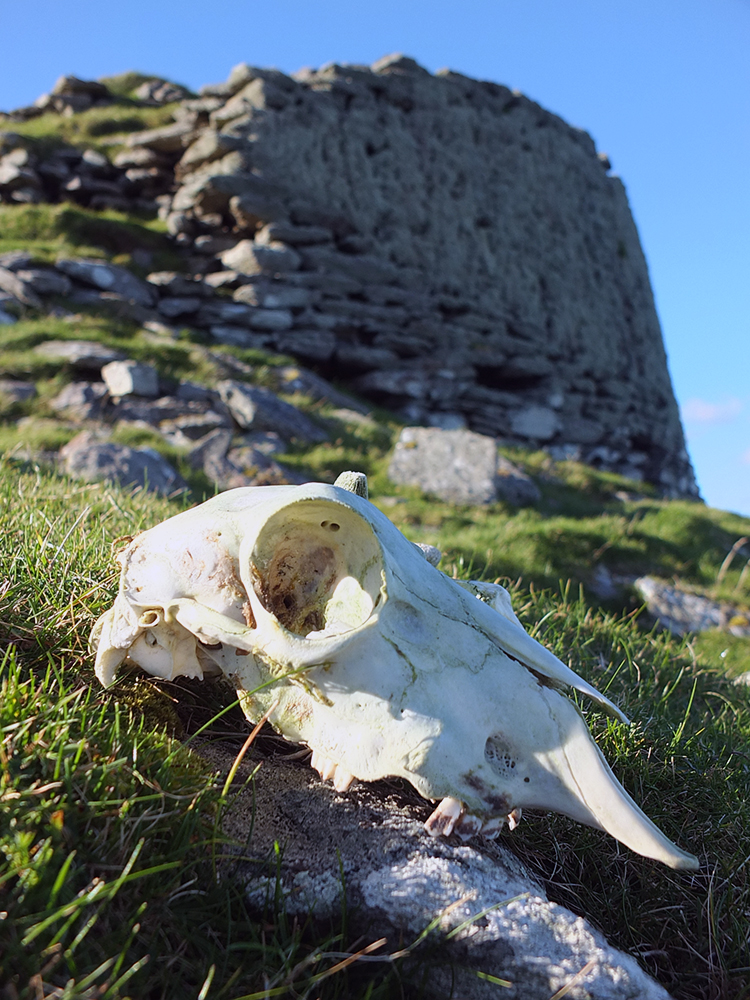 A Walk to Burra Ness Broch

Our weekend adventure in Yell, Britain’s second most northerly island.

We’ve recently had a spell of unseasonable glorious, sunny weather. Nearly two weeks of sun and very little wind (for our standards), and so come the start of the October school holidays I made an executive decision to take my younger two children on a grand overnight adventure to the island of Yell, Britain’s second most northerly island.

On my spring cycling trip through the islands of Unst and Yell I’d been shown, from a distance on the Fetlar ferry, the location of the ruins of a fairly well preserved Iron Age broch on the north east tip of Yell. I’d mentally bookmarked the site as a place to explore at a later date.

The first weekend of the October holidays was predicted to continue to be gloriously sunny and so I packed our car full of camping gear and we set off early on the Saturday morning to catch the ferry from the mainland of Shetland to Yell. 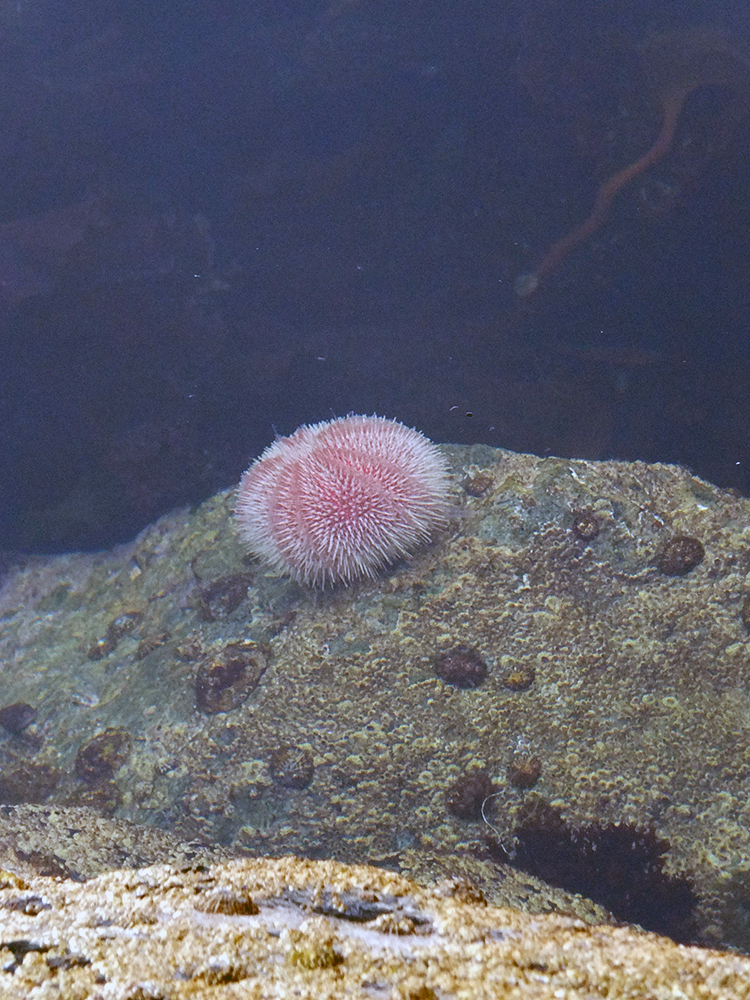 And we missed it by five minutes.

No matter, we spent the next hour exploring the beach and pier and caught the next ferry. We explored the beach and spotted quite a few ‘Scaddy Man’s Heids’, as they are locally known (sea urchins) close enough to the water’s surface to photograph. They’re such an intriguing species!

My original plans were to spend the day hiking out to this broch, check out a new American style diner that’s just opened in Mid Yell and camp overnight at the Burravoe Pier Trust campsite, a well maintained campsite with tent pitches for only £4.

My Plan B was to see if I could ring the custodian for the Windhouse Camping Bod situated in Mid Yell near Shetland’s most haunted house – Windhouse. I’d spent two nights there during my cycle trip and I’d loved it that much I wanted to show it to my children. Plus, outdoor camping in October in Shetland is probably not the warmest of activities. I’d left it too late on the Friday afternoon to book the camping bod via the Amenity Trust who run and maintain it, so I wanted to see if I could ring the lady with the key when I got to Yell. I found her number on the camping bod door and left a message. 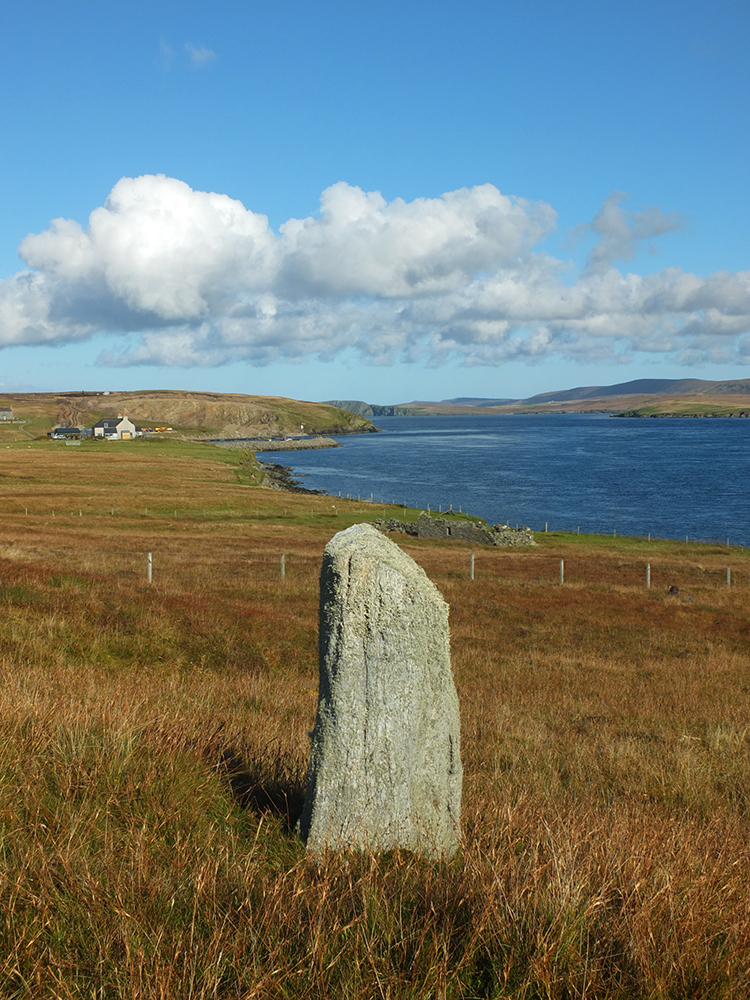 We began our hike at the Gutcher ferry terminal, parking the car in the car park I ballroom danced in under the moonlight many years ago for a National Theatre of Scotland production (true story! it was a bizarre but fantastic production involving ballroom dancing, transport and parkour!).

We popped into the newly opened Gutcher Goose Shop & Cafe for provisions (it reopened this May, shortly after my cycle trip) and walked along the shoreline to a nearby Standing Stone I’d read about in the book Walking Shetland by Mary Walsh in walk #21.

The kids were nonplussed about the standing stone. “Mum, it’s just a big rock!” In fact, if you look carefully along the fence line towards the right in the photo above and you can see my youngest son in a sulk because he can’t walk one single step further (we’d only started our journey over by the pier in the background of the photo!). 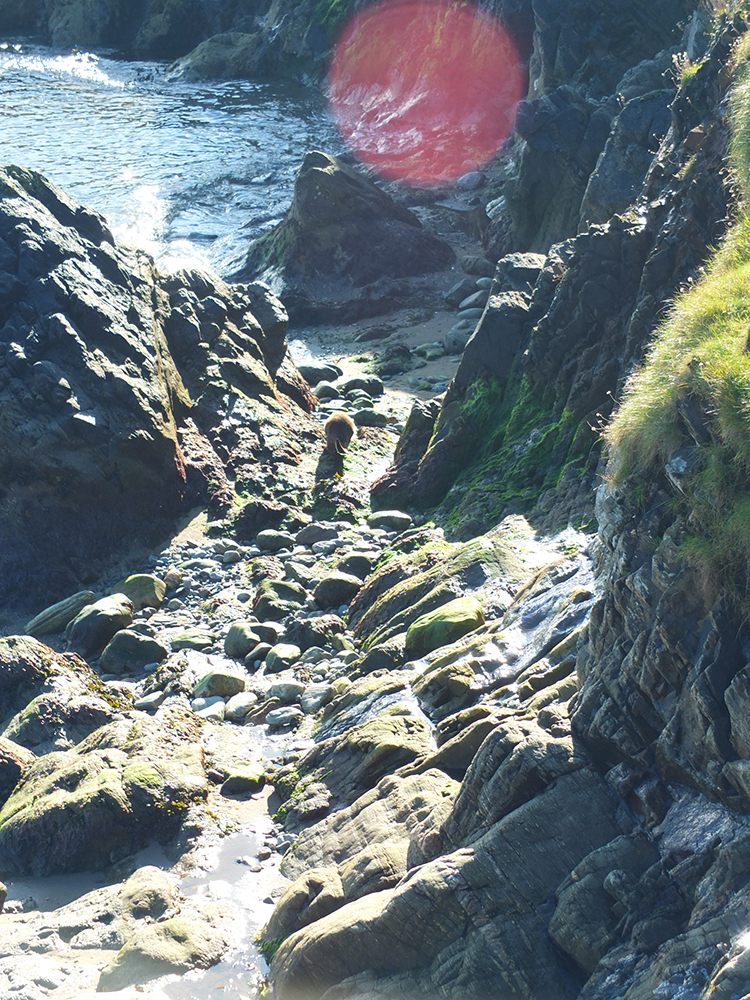 Things started to get a bit more interesting when we stumbled across an otter, on land! Well I stumbled across it first – I was walking about twenty paces ahead of my whinging children when I saw it, and it saw me, and we both, for a brief moment, made eye contact and paused, stone still.

I gestured behind me to try and get the kids to stop, or at least walk silently. “What Mum? Whaaat? WHAT IS IT MUM? WHAT DO YOU SEE?!” and the otter scurried away down the cliffs to the beach below. I snapped a photo of it’s rather broad backside, pictured above! Man that thing was HUGE! 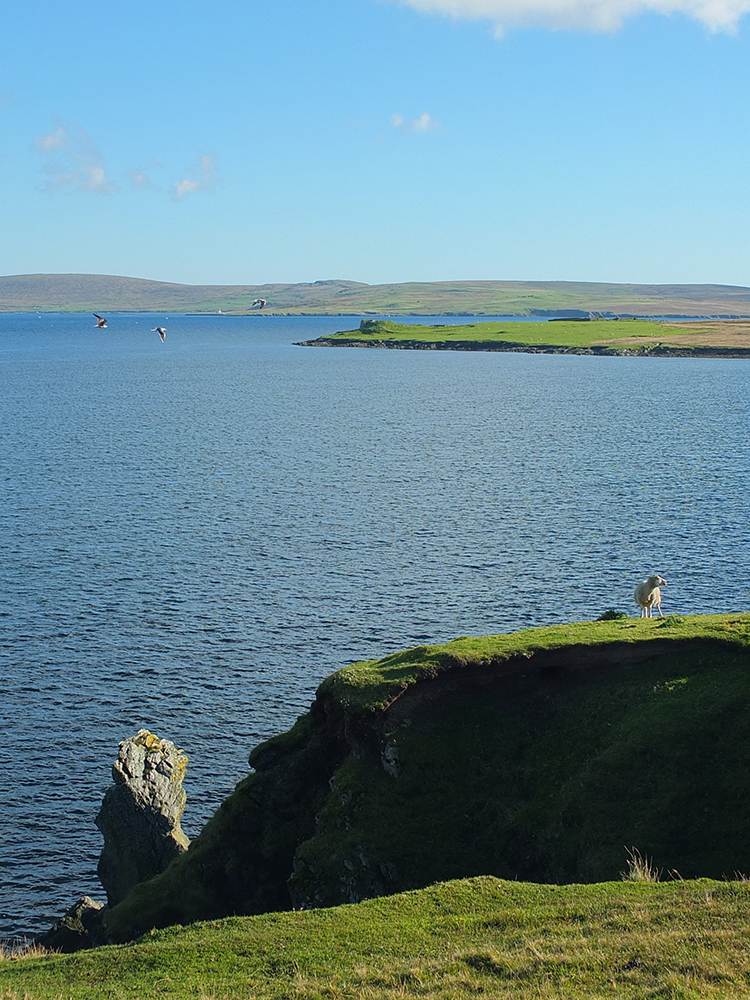 Fast forward an hour and a half after we scurried down the side of a bank to have our picnic lunch on the beach in a lovely sheltered area (the otter followed us for a good twenty minutes, swimming along side in the sea!), and the moods of the children had improved significantly (I think they might have been hungry!) and the sun was gloriously warm above us.

We spotted the Burra Ness broch in the distance (pictured above). You can see the land is green all around it – this is because they’d cleared and cultivated the ground for growing their food two thousand years ago. You can still see the piles of stones in the field where they laid them while clearing the ground.

It was around this area in 1858 where May Moar abseiled down the cliff to a rocky precipice below with two other women holding fast the rope. She rescued two men who had been thrown from their boat in a fierce storm and was award the RNLI Silver Medal for Gallantry.

A report from the Times quotes: ‘”If some o’you will guide weel this rope,” she said decisively, dashing from her face her woman’s tears, “I’ll gang ower the [precipice] and save the men wi’ God’s help”’ 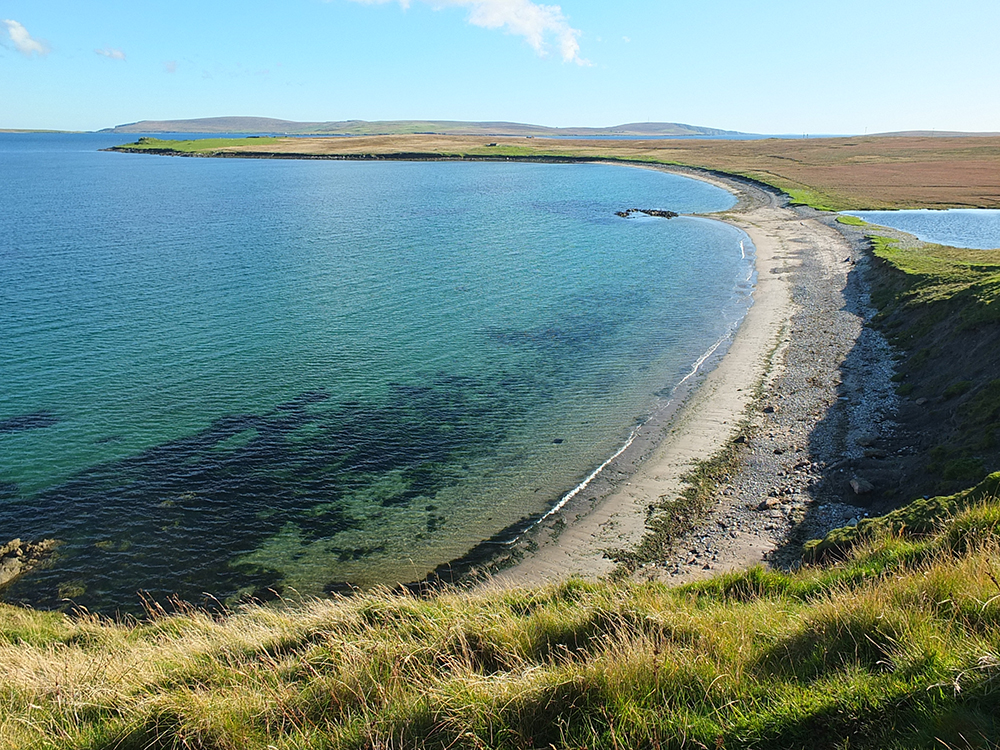 It was at this point, overlooking the beach below, where my phone rang. I don’t get mobile signal in my own house, so to receive a phone call here, in the middle of nowhere, after traipsing across boggy moors and cliff tops – well, I was rather surprised!

It was the custodian for the Windhouse Bod. Yes, it was available, yes we could stay there the night. She’d leave the key hidden for us! Yay!

The kids abandoned me while I was on this phone call, running down the hillside to the beach below. You can see them – two little dots on the shoreline. 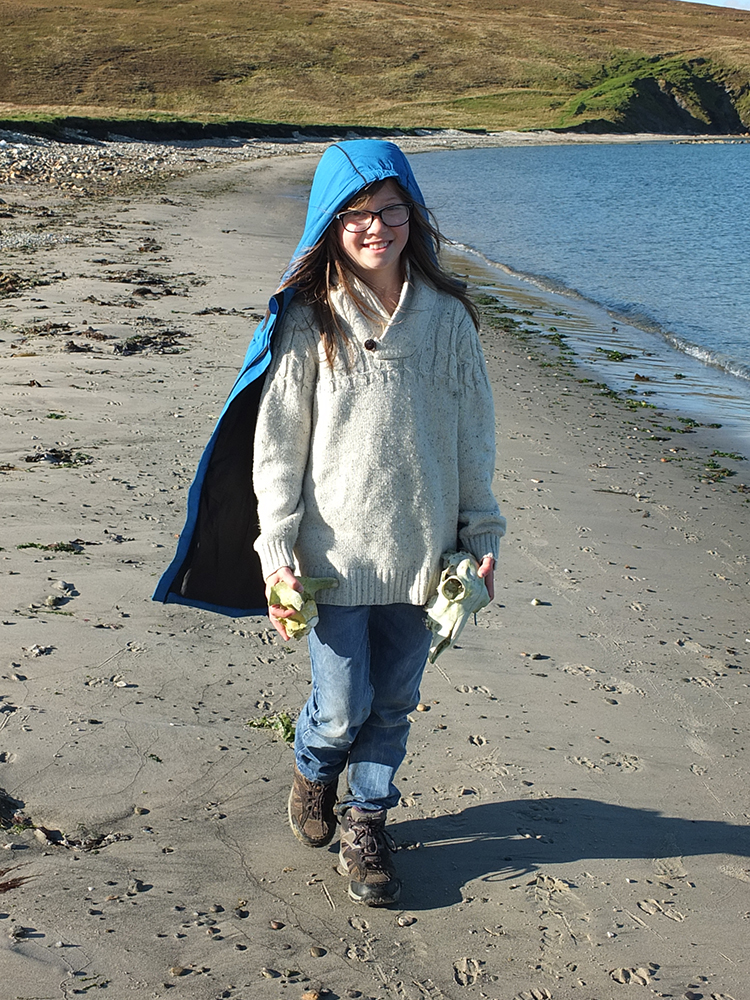 Madam picked up a few sheep skulls off the beach – a ram and a ewe – and we could compare the differences between them (one had very wobbly teeth). We also spotted quite a few washed up lobster/crab creels and some half dried skin that looked like it might have been some bizarre deep sea creature with spiky dinosaur scales.

We continued along the waterfront finding a few noosts (hollowed out areas where the local crofters used to house their small boats) until we reached the broch itself, a rather formidable structure overlooking the water.

What is a broch, you might be asking? Well, it’s a hollow drystone Iron Age structure built about 2000 years ago. They seem to be located only around the coastal areas of Scotland and historians aren’t completely sure what their purpose was. Dwelling houses? Defence structures? This particular broch, standing at four metres on its seaward side, is one of Shetland’s best preserved (following Mousa and the Clickimin brochs). 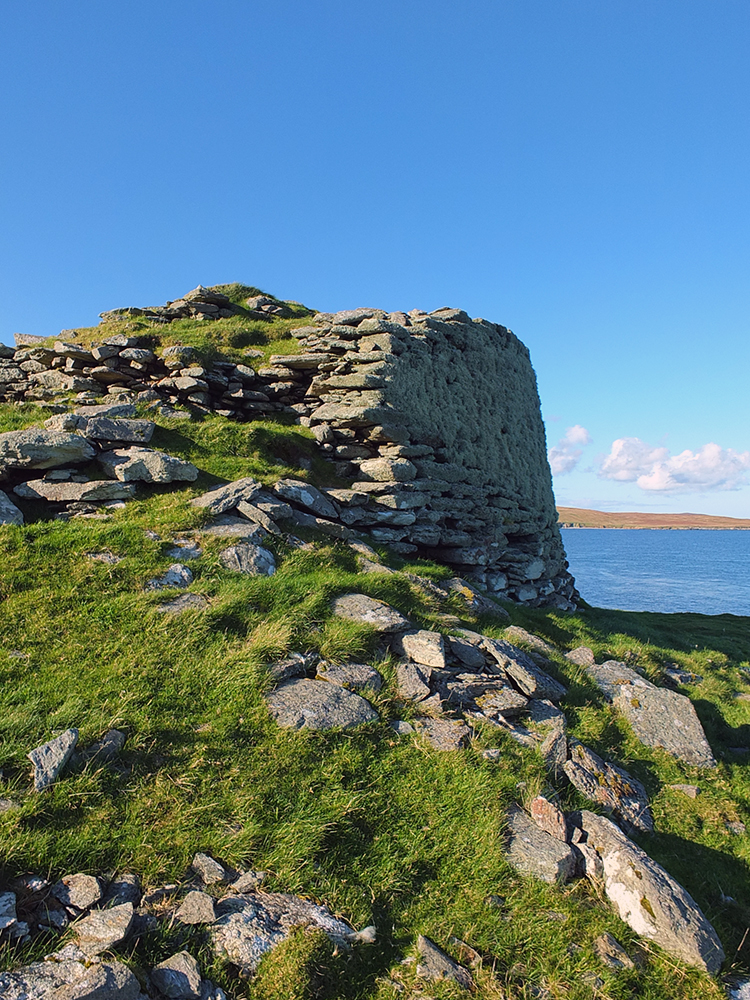 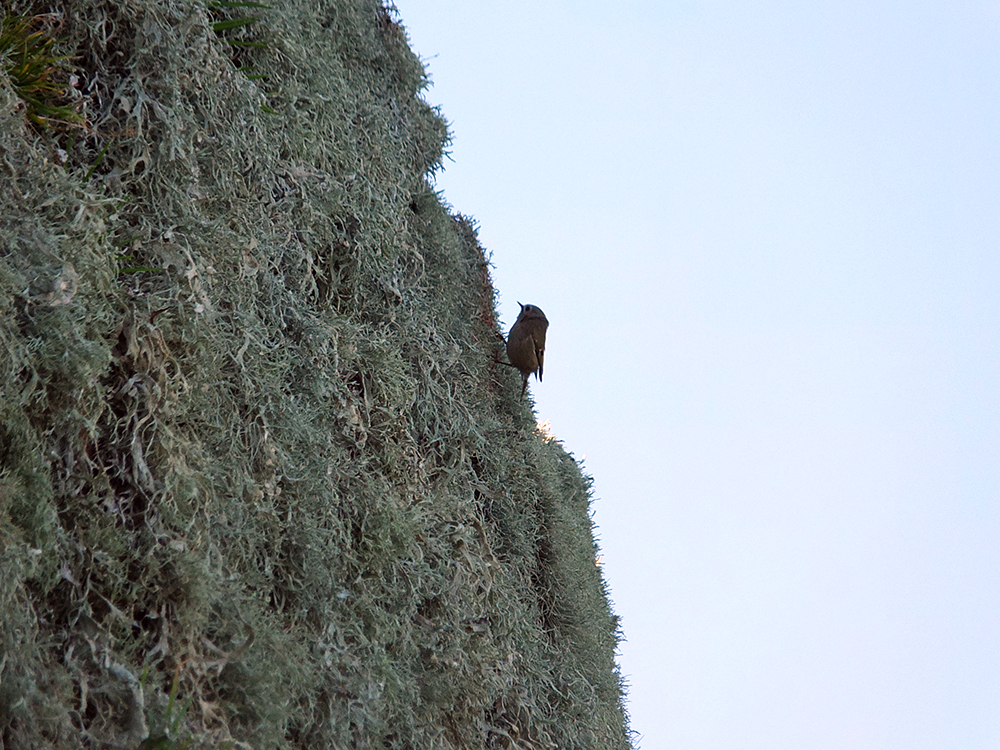 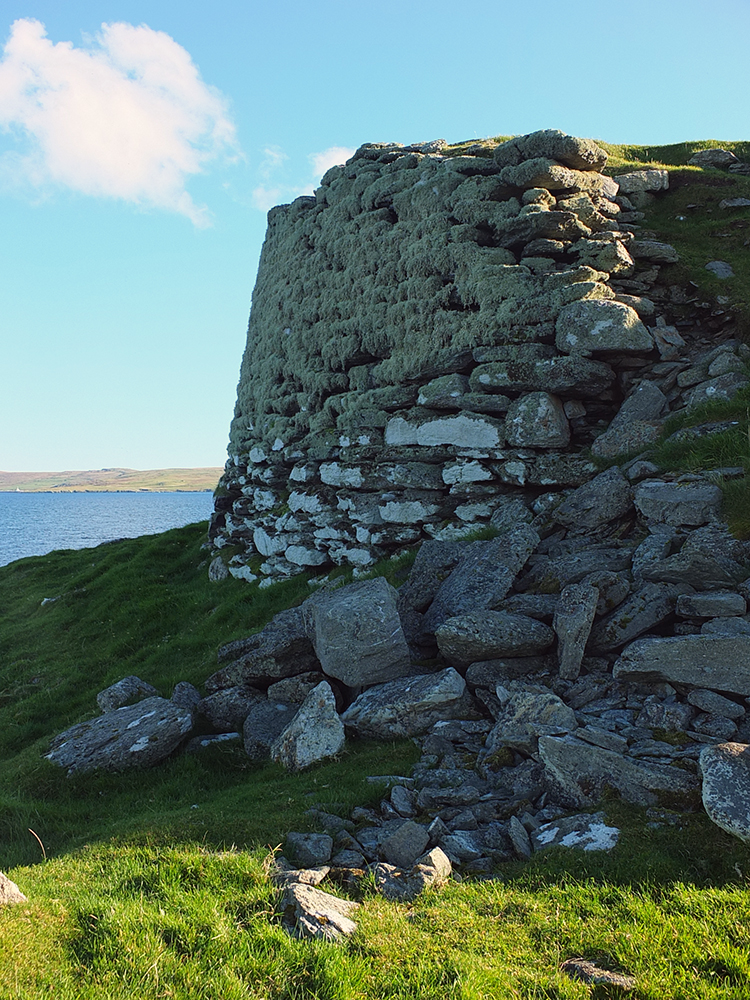 It’s pretty magnificent, isn’t it? And it’s never been excavated either. Who knows what treasures lie beneath all that rubble?

The walk back didn’t take nearly as long as we headed back up the hill and across the field to a road in Kirkabister. If I was to suggest anyone do this hike again I’d say start from there like it suggests on the Burra Ness Circular walk on Shetland.org.

We’re glad we went the route we did though. It was a rather adventurous day! Seals, an otter, cliffs, beaches, prehistoric buildings, fresh sea air and sunshine – you can’t get better than that!

It turns out that my youngest could walk one step further, in fact, according to my Fitbit, he did another 20,000, at least! It was a good ten mile hike that we did. 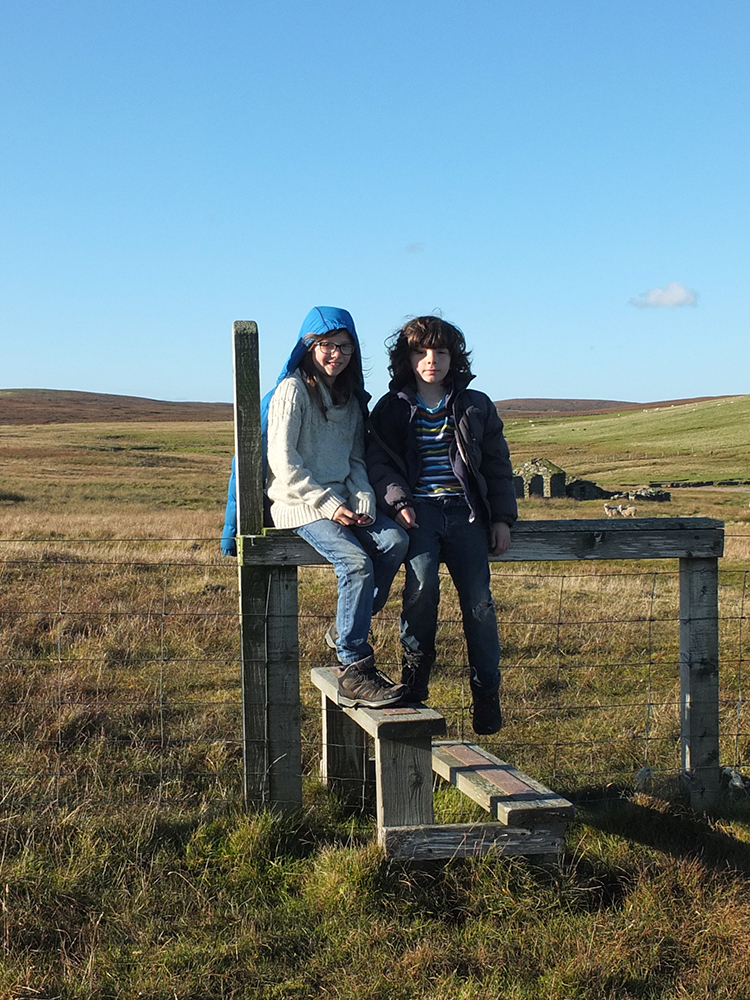 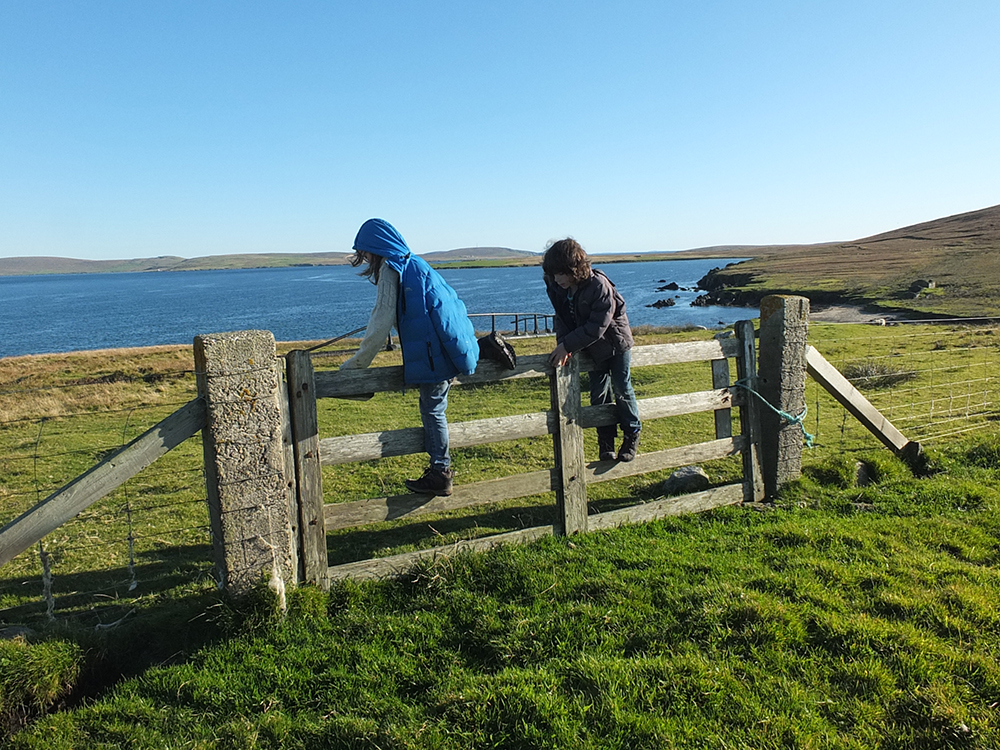 We finished off our adventure in Yell by ordering takeaway pizzas for the kids and a rack of maple glazed ribs for me at the newly opened L&J’s Diner and Pizzeria in Mid Yell. With it’s wild west theme and American style menu this is a place we will definitely be returning again to soon!

We made ourselves comfy with our dinner in the Windhouse Lodge cottage (a bargain at £10 per person, per night), and I lit us a roaring fire in the little cast iron stove. 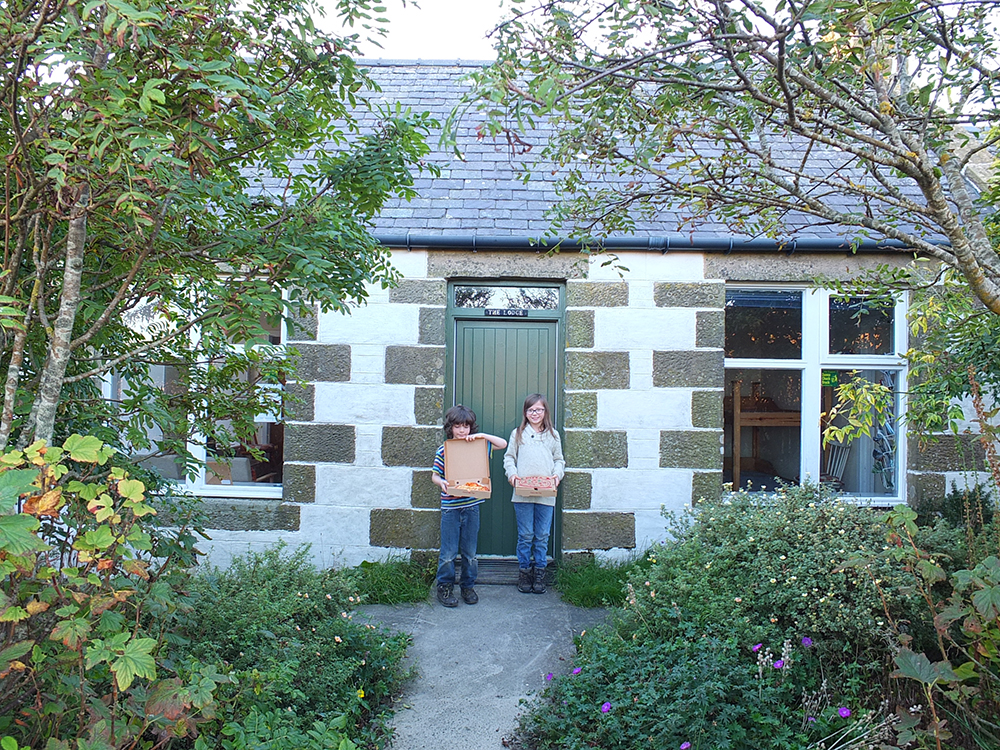 I’d forgotten to pick up some firelighters in the shop and although bags of firewood are provided there was nothing but a box of matches to get the fire lit with. I used some Loki’s candles (curled pieces of birch bark found on the beach that have likely drifted over from Canada) and a handful of very dried tiny pieces of driftwood I’d collected off another beach a few weeks ago and forgot about in the boot of the car. That, and a cardboard Smartie tube found underneath a car seat did the trick! 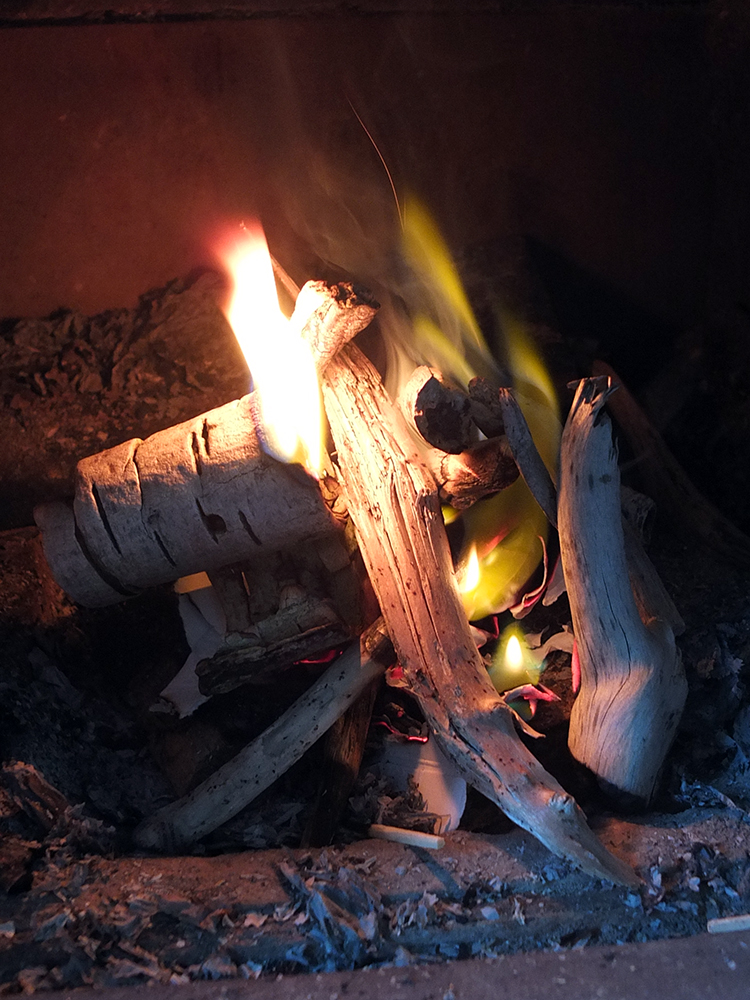 Despite being cosied up in the gatehouse to Shetland’s most haunted house, Windhouse (located up on the hill behind the lodge) we slept soundly.

The only one who woke up whispering “What was that?! Mum, Mum, I’ve heard something!” was the one who, earlier on in the day, declared in her most Hermione Granger voice: “I do not believe in ghosts.”