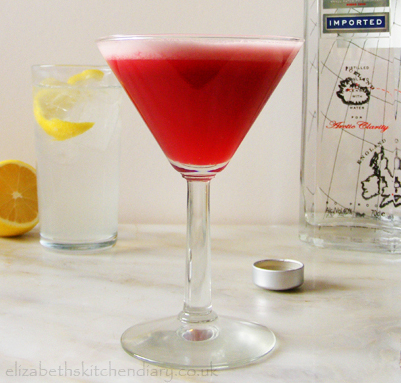 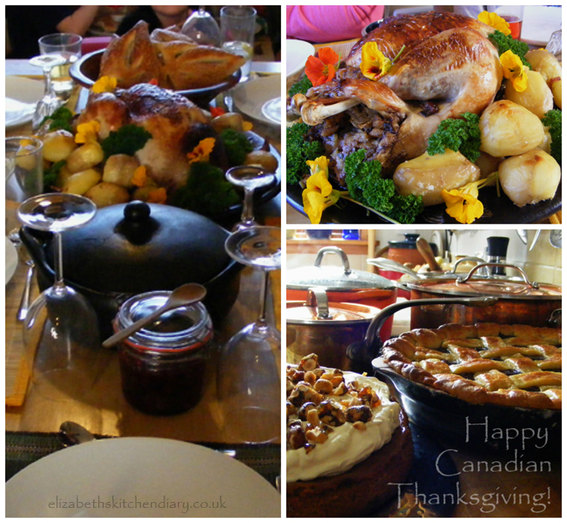 It’s been nearly fifteen years since I packed that big green Army Surplus rucksack with all my worldly possessions and moved thousands of miles across the pond from my home on the East Coast of Canada to new beginnings on a remote archipelago in the North Sea.
Life in Shetland is very different to what I knew in Canada. Shetland is legally part of Scotland and subsequently the UK (for now!), but it very culturally different and unique from both of those places. The food is different from where I grew up and so are some of the holidays. Sometimes I like to share aspects of my Canadian upbringing with my Shetland friends, and this year I did just that by cooking a Canadian-style Thanksgiving dinner for eight.
Thanksgiving in Canada is different from the American version. The first official Canadian Thanksgiving was in 1872 as a celebration of the Prince of Wales’ recovery after serious illness. It wasn’t until 1957 when the Canadian Parliament declared “A Day of General Thanksgiving to Almighty God for the bountiful harvest with which Canada has been blessed – to be observed on the 2nd Monday in October.”
So, here we have a detailed account of the very first Thanksgiving dinner I have ever prepared. Please excuse the hurried photos – I was busy cooking when I took them!
Canadian-style Thanksgiving Menu 2013
Roast Turkey
Winter Fruit & Nut Stuffing
Roast Shetland Potatoes
Creamed Sweet Potatoes with Nutmeg
Brussels Sprouts Gratin with Bacon, Almonds and Cream
Braised Red Cabbage with Port and Pear
Corn on the Cob
Buttery Shetland Carrots & Turnip
Spiced Cranberry Sauce
Turkey Gravy made with Giblet Stock
Fougasse
**
Blueberry Pie
Pumpkin Pie with a Nut Crust and Hazelnut Praline
French Vanilla Ice Cream
Old-fashioned Soft Molasses Cookies
***
Martin Miller’s Gin Cocktails 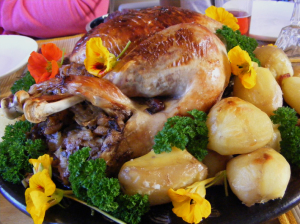 Now, I have a confession to make. This was the first time I’d ever roasted a turkey! I love turkey, especially my grandmother’s roast turkey. I remember the huge beast defrosting for ages in her basement pantry and her diligently basting it as it roasted. The smells that used to permeate the house were mouthwatering. I like to think I recreated that in my own home for my own children to remember. My partner was sceptical, complaining that roast turkey is always dry but I’m pleased to report I’ve changed his mind.  I followed the roasting instructions on the packet, covering the bird with foil for most of the cooking and removing the foil for the final half an hour so it browned nicely. The resulting roast turkey was moist and delicious. As I’m quite proud of my first attempt at roasting a turkey I am sharing it with October’s Four Season’s Food blogging challenge over at Eat Your Veg (co-hosted by Anneli over at Delicieux).
The winter fruit and nut stuffing I used I have made before with roast chicken and I fell in love with it. It’s my most favourite stuffing to date and leftovers freeze very, very well. I halve the recipe found on Epicurious which is more than enough for a medium sized turkey or large roast chicken. I ran out of pecans and my  local shop was out of pears so I substituted them with walnuts and apples and it was just as delicious. Walnuts is the theme food for this month’s One Ingredient challenge by Nazima at Franglais Kitchen and Laura at How to Cook Good Food so I’ve shared this post with them. It’s an awesome stuffing, do try it! 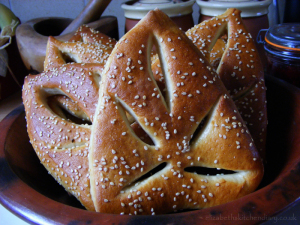 The bread was a cheats version of fougasse, a French flatbread I discovered picture instructions for over at A Canadian Foodie. Canada has a strong French influence so I thought the French bread would represent that. I used Jamie Oliver’s basic bread recipe (made by hand – I started the dough at 7:30 in the morning so it would be fresh!), brushing with egg wash and sprinkling with sesame seeds before baking. I thought the children would appreciate the unusual shape of the bread, and they did!Most of the vegetable accompaniments came from our local vegetable box distributor at Turriefield, on the west side of Shetland. The carrots, turnips, Brussels sprouts and red cabbage were all organic and utterly gorgeous. The Brussels sprouts were made into one of my favourite holiday season dishes: Brussels sprouts gratin with bacon, almonds and cream. This I could eat bowlfuls of, with nothing else! The braised red cabbage with port and pear was leftover from a dinner a few weeks back so that was fairly easy to defrost and reheat. 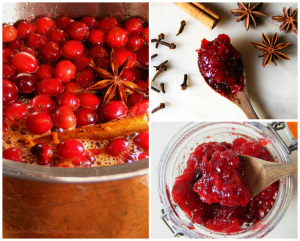 Now, no roast turkey dinner is complete without cranberry sauce, in my humble opinion. I found some frozen cranberries lurking at the bottom of my deep freezer from last Christmas and made them into a lovely spiced cranberry sauce with white wine, cinnamon, star anise and cloves. Home made cranberry sauce is a dawdle to make and tastes so much better than the shop bought variety.Growing up with Thanksgiving dinners at my grandmother’s house there were always a selection of pies to choose from for pudding. This was usually pumpkin, blueberry, raisin and/or apple. Therefore, I wanted to serve a selection of pies at my very first Thanksgiving. This was the first time I’d made a blueberry pie (I can’t believe that myself, given how much I loved it as a child!) and I found a superb blueberry pie filling from here. I scaled up the ingredients to use five cups of blueberries as that’s how much it took to fill my pie pan.

The blueberries I’d bought a few months ago at the local supermarket on offer for a mere 66 pence per 250 grams, a bargain! As such I’m sending this recipe over to Credit Crunch Munch by Camilla at Fab Food 4 All and Helen at Fu 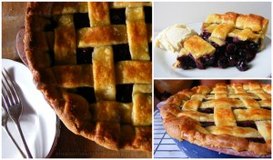 ss Free Flavours. This month Michelle over at Utterly Scrummy Food for Families is hosting.

The sweet pastry dough recipe came from Dean Brettschneider’s book Pie and it was a perfect pastry for the sweet filling. I dreaded the thought of a soggy bottom when it came time to serve and alas, although the bottom was not soggy (I’d made the filling and pastry the day before and chilled it overnight) it was insufficiently cooked. I brushed the base with egg white, chilled for a half an hour before filling, placed the pie plate on a preheated baking tray at the correct temperature recommended by Mr. Brettschneider but alas, it was not perfect. I’m going to blame it on my dodgy oven with it’s single from above heating element. Maybe I should have placed the pie plate on the bottom of the oven and not the centre. Still, it tasted superb and I will make it again! This was served with some home made French vanilla ice cream, a delicious and creamy recipe from the Ben & Jerry’s ice cream book. 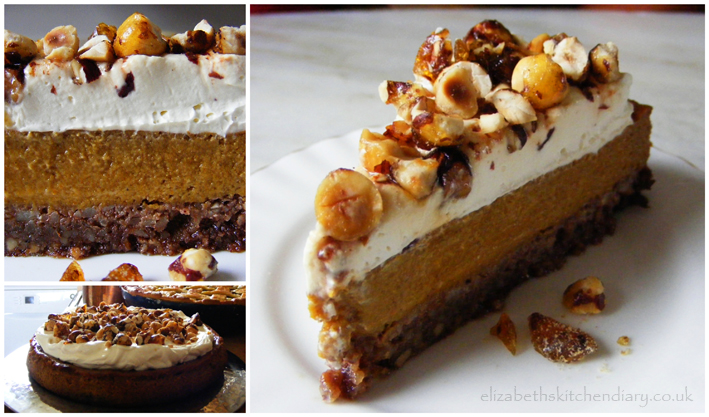 The second pie I prepared was a creative adaptation of the traditional pumpkin pie. Pumpkin pie was never my favourite as a child (in fact I downright hated it!) but tastes change as one grows up so I thought I’d give it a go. I made a pecan and hazelnut crunch base with cinnamon and brown sugar, filled it with a traditional home made pumpkin pie filling and topped the cooled pie with sweetened whipped cream and roasted hazelnut praline.

It was lovely! However, I’m going to go back to the drawing board and develop this recipe a little further before sharing. I’m going to make it no bake so that the crunch stays in the crust. Watch this space, I should hopefully have a recipe up before the American Thanksgiving, or at least Christmas at the very latest!

Nanya over at Simply Sensational Food is hosting a Let’s Cook with Pumpkin event this month, so I’m sharing this traditional pumpkin pie filling recipe with her.

Children often aren’t that fond of pies, I’ve learnt, so I defrosted some of the old-fashioned soft molasses cookies I’d made not too long ago as a Plan B. The children loved these! 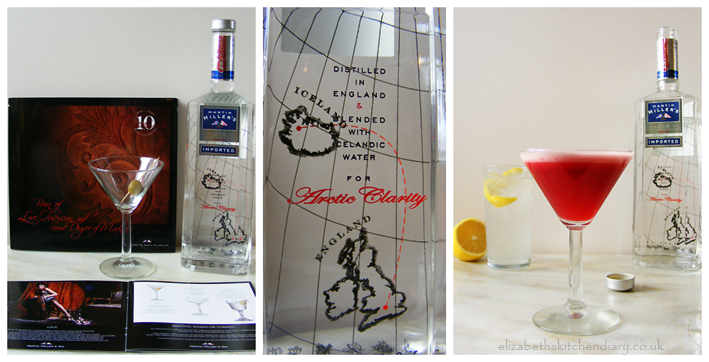 To finish our Thanksgiving meal off the grown-ups sat back and relaxed while my partner whipped up some cocktails. The day before Thanksgiving a parcel arrived in the post containing a bottle of Martin Miller’s Gin. The first thing I noticed was the impressive ‘sleeping bag’ packaging it was sent in so that it arrived all these miles to its destination in the North Sea without getting smashed.  Then I noticed the superb labelling. As a product sitting on a shelf I would say this it is visually stunning. It has clear and simple labelling which tells you right away that it is made in England with Icelandic water.  My only complaint is that they’ve omitted Shetland on their map. This happens quite frequently. We’re often forgotten about all the way up here in the middle of nowhere!

Martin Millers Gin is distilled in England and made with natural spring water from Iceland. This pure spring water is combined with the flavour of juniper berries, cassia bark, coriander seed, angelica root, orris root, citrus peel and a few other secret inspirational herbs in a 1904 gin still fondly named Angela. 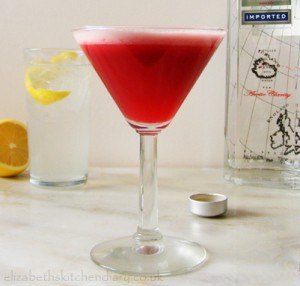 The dedication to creating a quality gin shines in this product. It’s a bit like drinking a glacier, with a serious alcoholic kick! They’ve won over 25 international medals and accolades since they started producing in 1999 (the year I moved to the UK!). We tried quite a few of the recipes in the accompanying book. My favourite has to be the Clover Club pictured left (I’ve shared the recipe below). It’s been many years since I’ve last tried gin; many years since the last top hat and tails cocktail party I hosted in my younger years. Thanks to Martin Millers Gin I’ve rediscovered my love of cocktails, and better yet, my partner loves making them so I just get to sit and wait to have my drink handed to me! For that, I am very thankful. 🙂

Martin Miller’s Gin just goes to show that if you want pure, unspoiled quality you just need to start North.

Clover Club
by Martin Miller’s Gin
A superb classic gin cocktail
Ingredients
Instructions
1. Shake all the ingredients together with ice and strain into a cocktail glass. Serve immediately.
Details

Elizabeth’s Kitchen Diary received a complimentary bottle of Martin Miller’s Gin for review. All opinions are my own and I was not required to write a positive review. This is not a paid post. 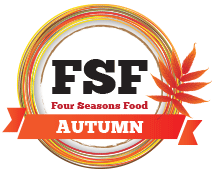