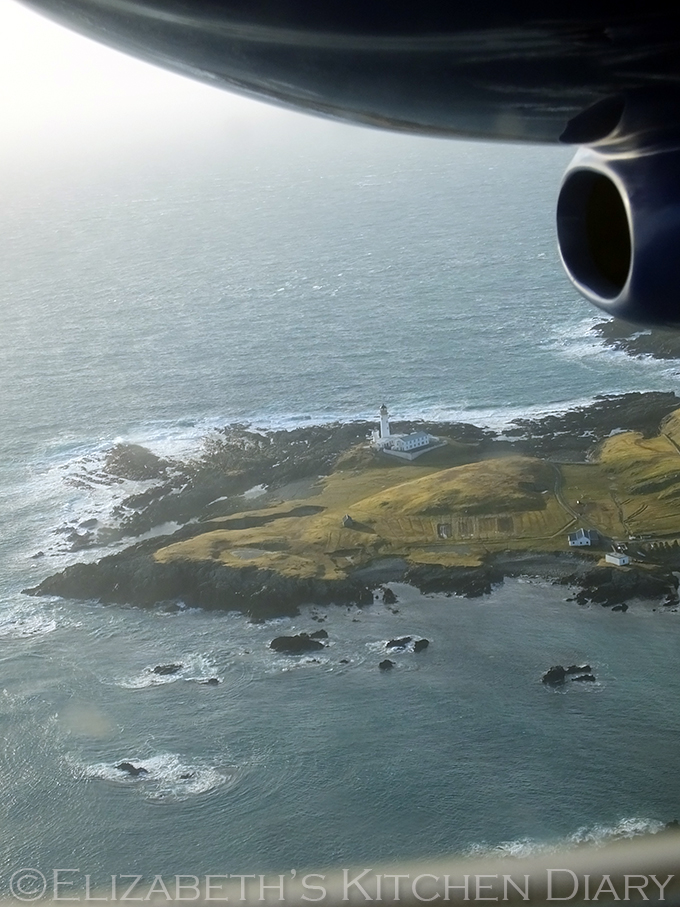 Fair Isle: a Jewel in the Ocean

An adventure story involving an airplane!

Have you ever had one of those days where you say to yourself (and anyone else who will listen) – I love my life! Monday was one of those days for me, when my adventures took me to Fair Isle, a tiny island midway between the Orkney and Shetland Islands, a 2.5 hour ferry ride (pass!) or a 25 minute flight in a 8-seater aircraft from the mainland of Shetland.

My day began early (as it does so frequently these days – 6 am is my wake up time of choice so I can get a few hours of work in before the kids wake up!). That night though I had one of those restless I’m going on an adventure tomorrow type of sleeps and yet I was still wide awake at 6 AM.

Come 8:30 AM, I found myself waiting, patiently, in the departure lounge of the Tingwall airport, a place I’d only ever driven past before on my way into town – sometimes slowing down to watch the Britten Norman Islander aircraft take off or land above our heads.

That little blue and white aircraft has always held a fascination with me, and I have often paused to watch it fly overhead on its routes to Shetland’s more remote locations – the Out Skerries, Papa Stour, Foula and Fair Isle.

The sun was shining brightly down upon us (in between heavy rain showers), and the flight was delayed. This flight is always subject to cancellation or delay, depending on weather conditions, so even at 9:15 I wasn’t sure if I was going to make it to the island, or even if I did make, there was no guarantee that I would be returning the same day. It was a risk I was willing to take. Visitors to the island need to be aware of this, but there are a few B&B’s and in the summer months there’s the Bird Observatory, so there is accommodation, just in case! We had to wait for the pilot to arrive to let us know if the conditions were suitable to flying.

There were five passengers in total (plus the pilot) on the trip out, and this plane was like nothing I’d ever experienced before. To board the aircraft the middle seat had to be folded forward, like getting into the back seat of a two-door car. There is a belt that goes across your chest, as well as your lap (just like in a car), and it’s tiny! You’re shoulder to shoulder with your seatmate and you have full view of the cockpit controls. My first thought was that if this plane ends up ditching in the sea for whatever reason, there’s no quick way to get out! The passenger behind me remarked that perhaps it would be a better idea to stay in the plane anyway, as the sea can be rather cold. Good point. 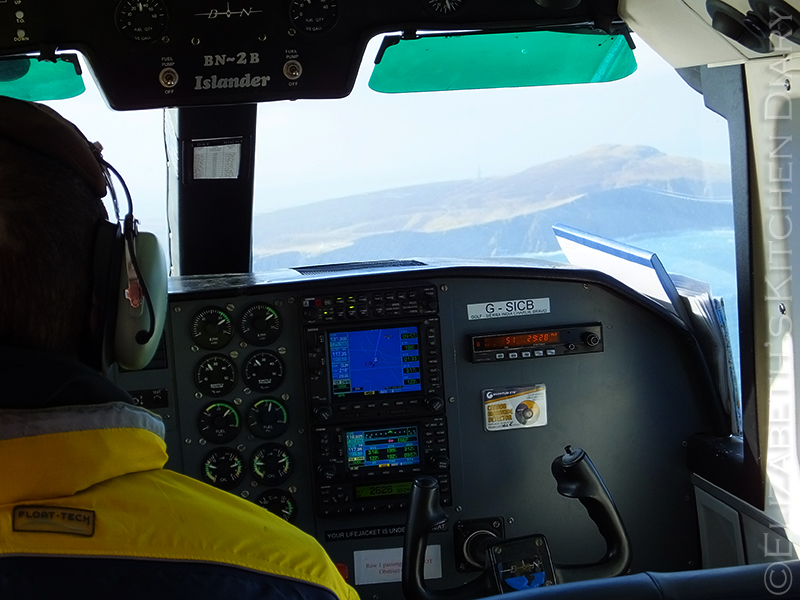 As soon as we took off I mentally added flying an airplane to my ever growing bucket list. Cue first I love my life of the day!

It’s a short flight down the west coast of Shetland and south across the open sea to Fair Isle. I took a million photos of the stunning coastline which I will save for later land-based adventure posts. In the meantime, in the photo above you can see my first glimpse of Fair Isle, a jewel in the ocean.

Fair Isle is only 5 km long and 3 km wide with the isle’s impressive cliffs rising to almost 200 metres on the west coast. Home to approximately 70 residents it is one of Britain’s most successful remote communities, pioneering projects in wildlife tourism, sustainable management of the environment and use of wind power.

Norse settlers named the island Fridarey – the island of peace, and there is evidence of settlements dating back 5000 years to the Neolithic times.

The flight itself was extremely pleasant, although you could visibly see the changes in altitude when you hit a bump. Once you got used to bouncing about in air pockets it was fine, and I gawped out the windows like an awe-struck child.

Regular readers will know I do a bit of freelance writing for Promote Shetland, our local tourism site. I’m currently researching an article for the summer issue of their 60 North magazine, which is why I was flying out to Fair Isle for the day. I was visiting the woman you can see, pictured below, second from the left. She wears a few different hats, and airport duty is one of them. 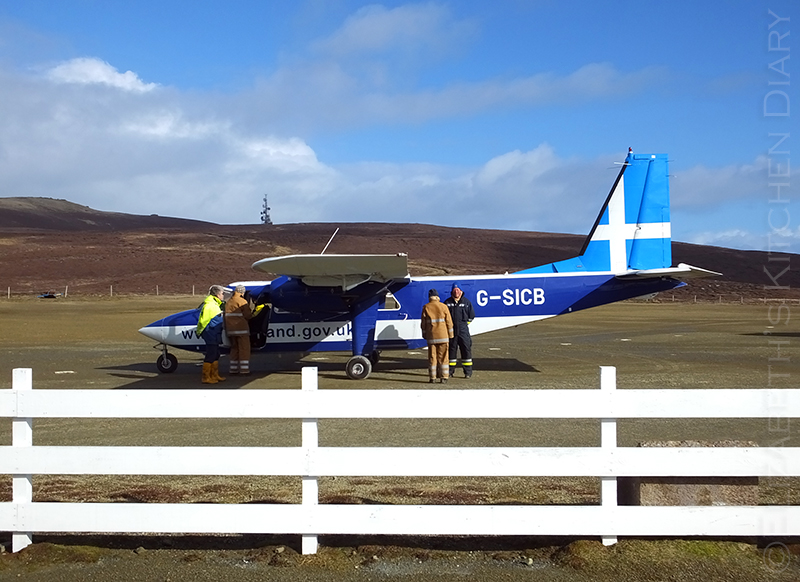 She kindly offered her partner to drive me to the south end of the island, to wait for her arrival at their home after she’d finished seeing the aircraft off again. So, 5 minutes after landing in Fair Isle I found myself sitting next to a complete stranger in a car. Awkward, hello! </wave>

I was soon set at ease. Such a friendly lot of people! We detoured back to the north end of the island again for a quick look at the cliffs, the north lighthouse, the Bird Observatory and the Good Shepherd, the mail boat.

By the time we got to their house at the south end of the island, the woman I was to visit had returned, but she need to be back at the airport for the next flight in. I offered (purely selfishly as the sun was shining brightly!) so go for a wander and meet up with her after she’d finished her airplane duty, then we’d have more time to chat. Win-win.

So, with the March sun brightly shining down upon me I set off on my adventures by foot for a few hours. My FitBit step count goal was complete by noon! I climbed 103 floors that day. 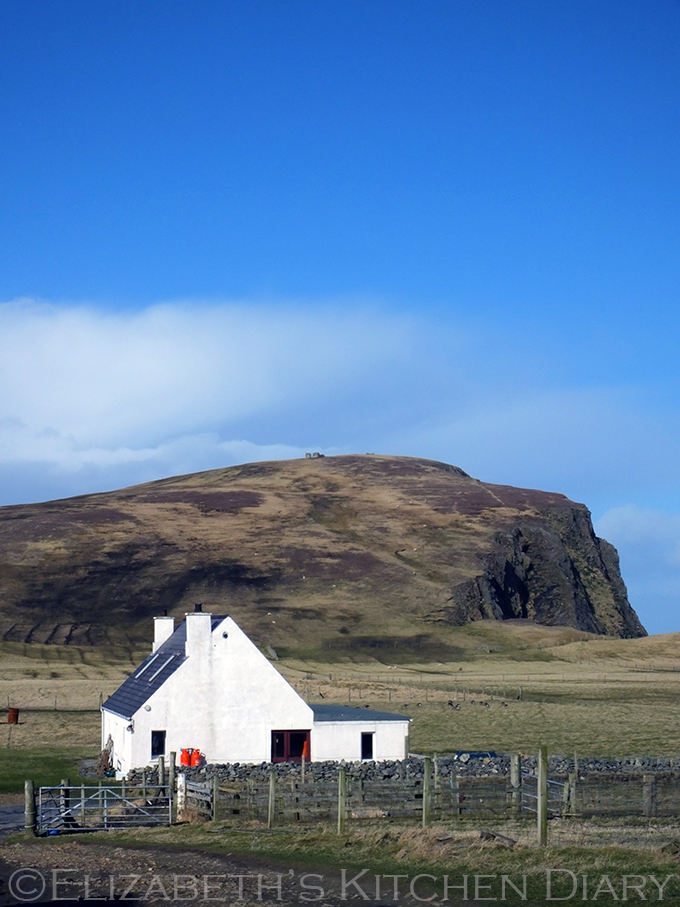 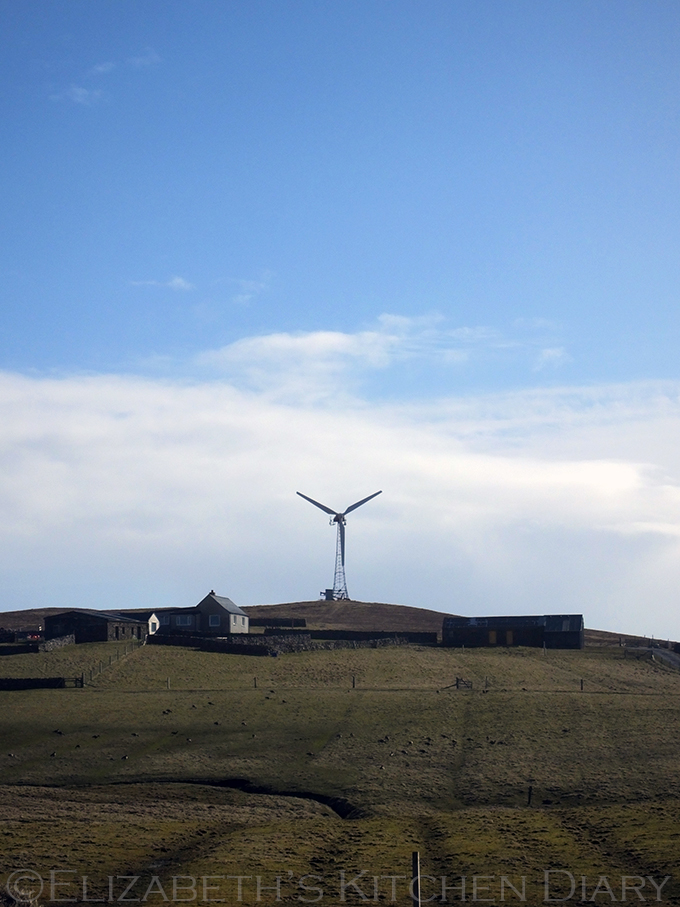 Fair Isle is not hooked up to the National Grid, instead, it is reliant on an abundant supply of wind power to generate the electricity needs of the 70 residents. In 1982 the community erected the first 60kw wind turbine with help from the council and government development agencies, and a second 100 kw turbine followed in 1996. The island is completely supplied with renewable, clean energy – an inspiration to the rest of the world! 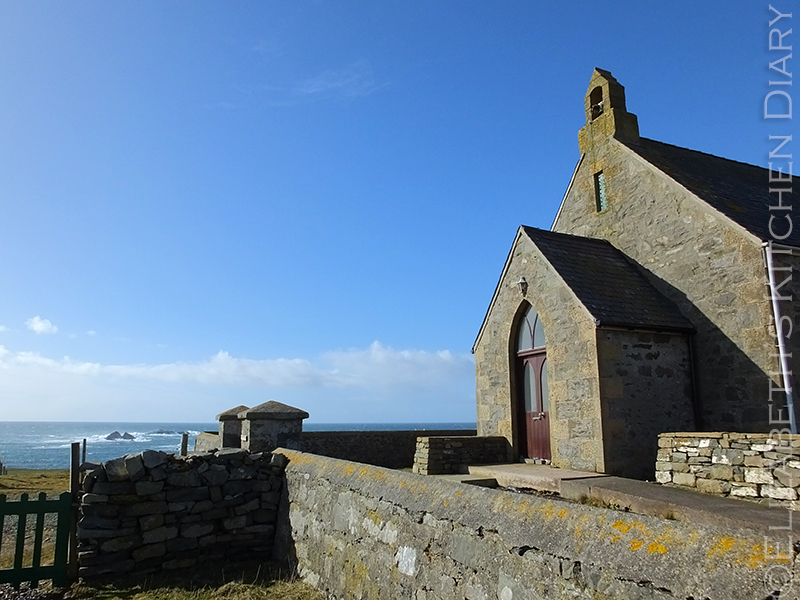 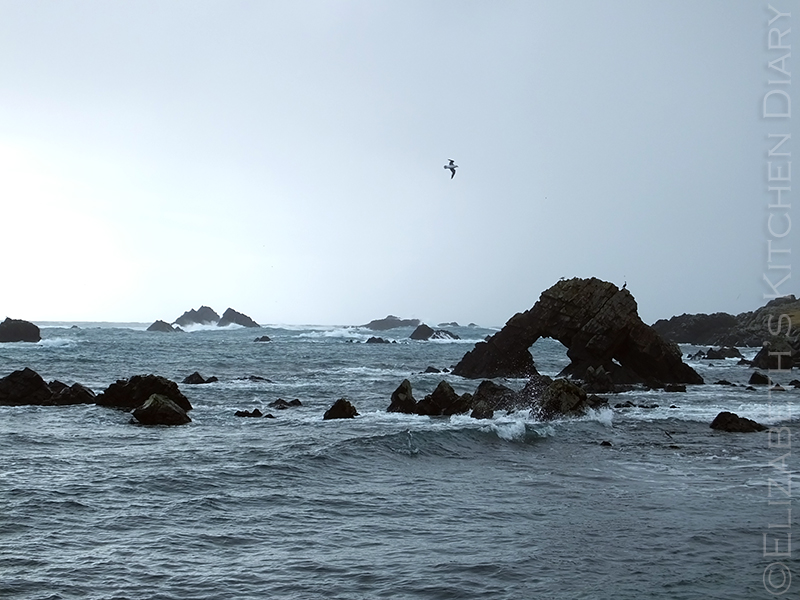 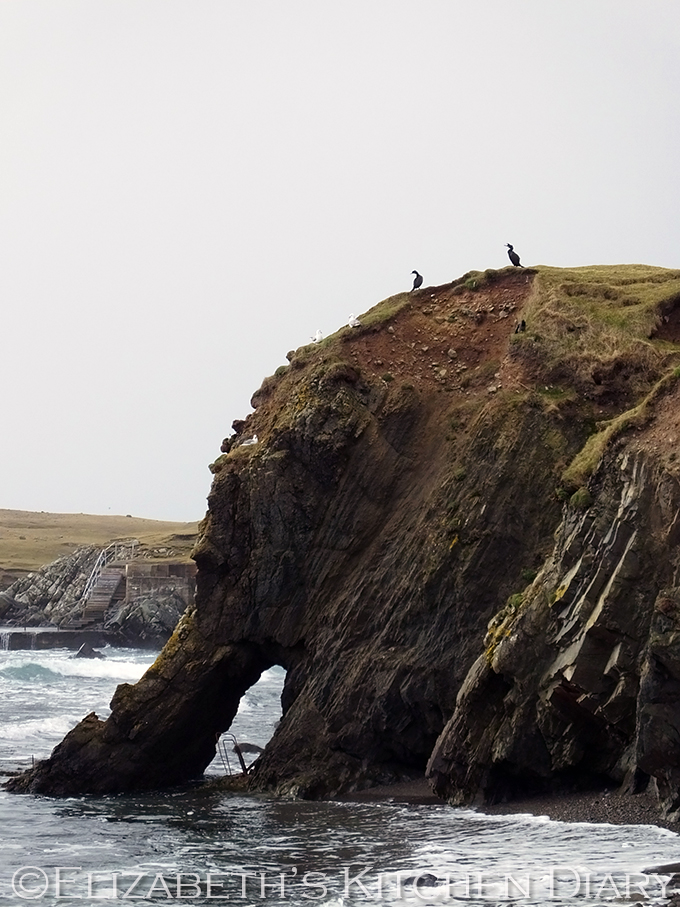 The weather on Fair Isle is changeable (as it is on the mainland of Shetland!). I wasn’t paying attention to the sky, having too much fun scrambling over rocks and taking photographs, so I got caught in a rain shower. Great big ice cold raindrops soaked my jeans right through! I was thankful I’d remembered to pack a hat and gloves that morning. 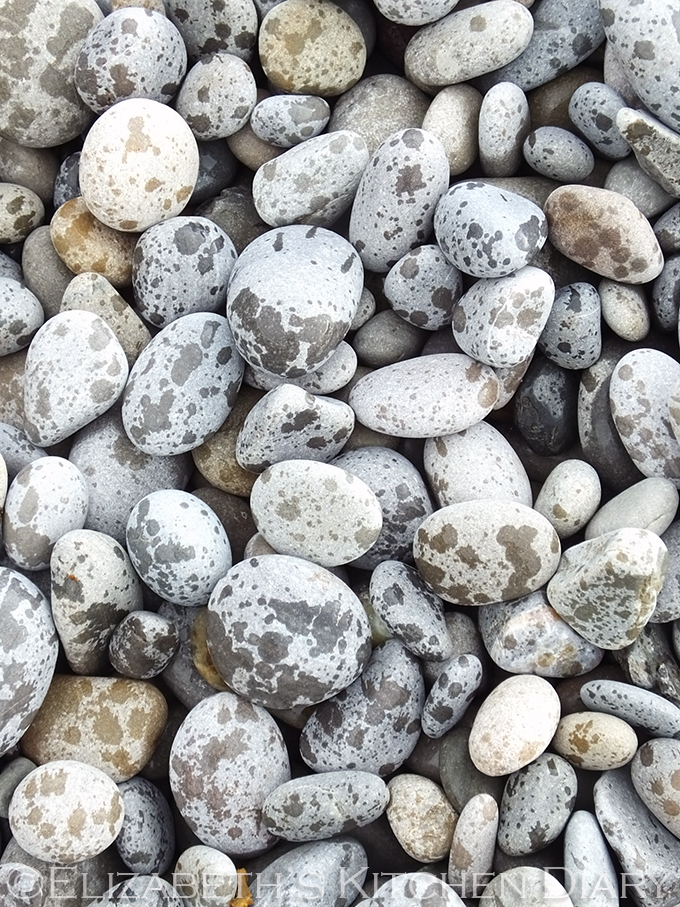 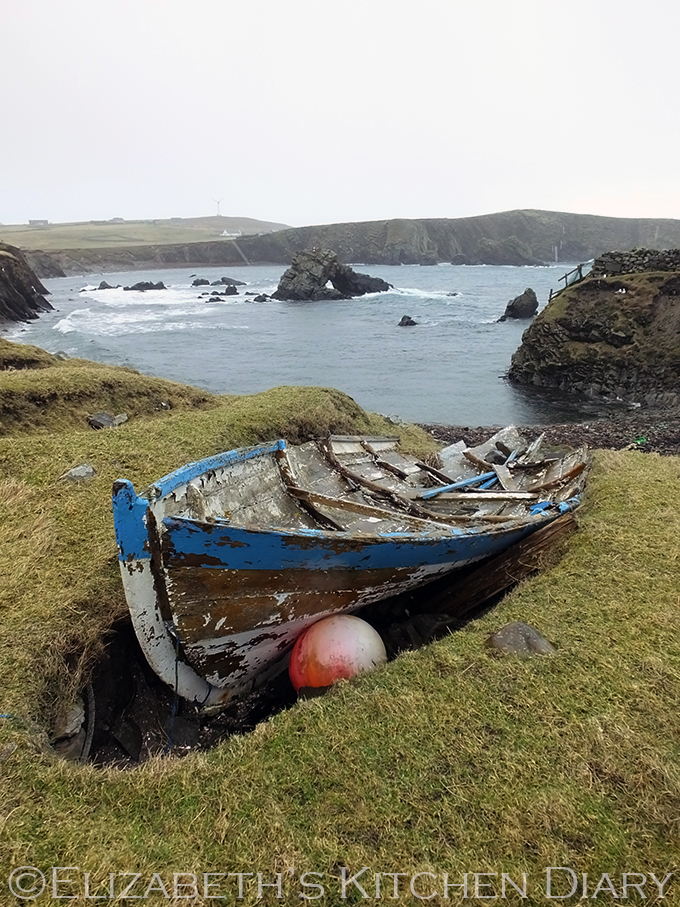 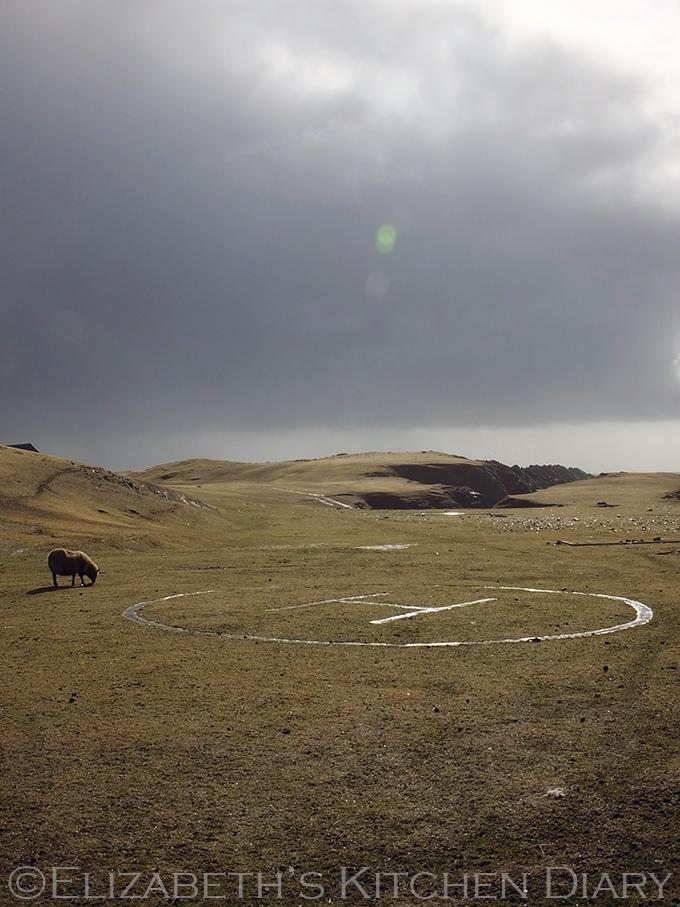 I sheltered from the rain next to a place with a Puffin Inn sign in the window, and when the rain cloud had passed by made my way to the south lighthouse. By the time I got there the sun was shining brightly again, and my soaked jeans dried fairly quickly in the sun and wind. 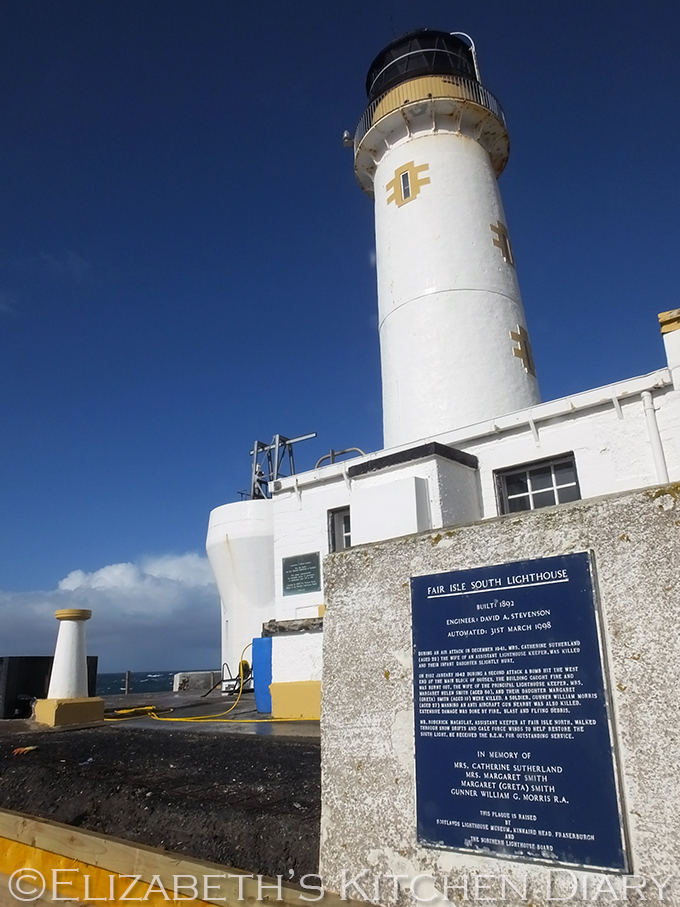 Now would be a good time to mention my travelling companion for the day: Flat Najim! Flat Najim is a photograph of the son of one of my childhood friends from rural Canada. We’d lost contact after graduating from high school, and I found her again via my grandfather who had posted a newspaper clipping to me: it was an article about my friend and her adventures with the Peace Corps which took her to Timbuktu, where she caught the eye of the village chief, fell in love, married and had children. They now live back in rural Canada, and her eldest, Najim, is on his travels around the world. You can follow his adventures on their Facebook page: Around the World with Flat Najim (you can see he got caught in the rain shower with me, and he didn’t dry off as quickly!). 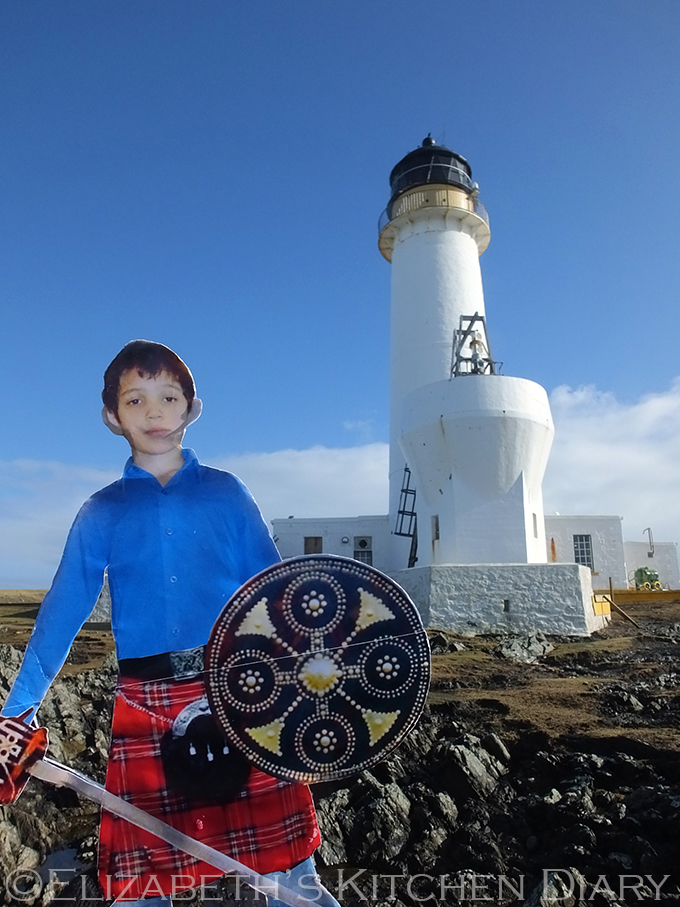 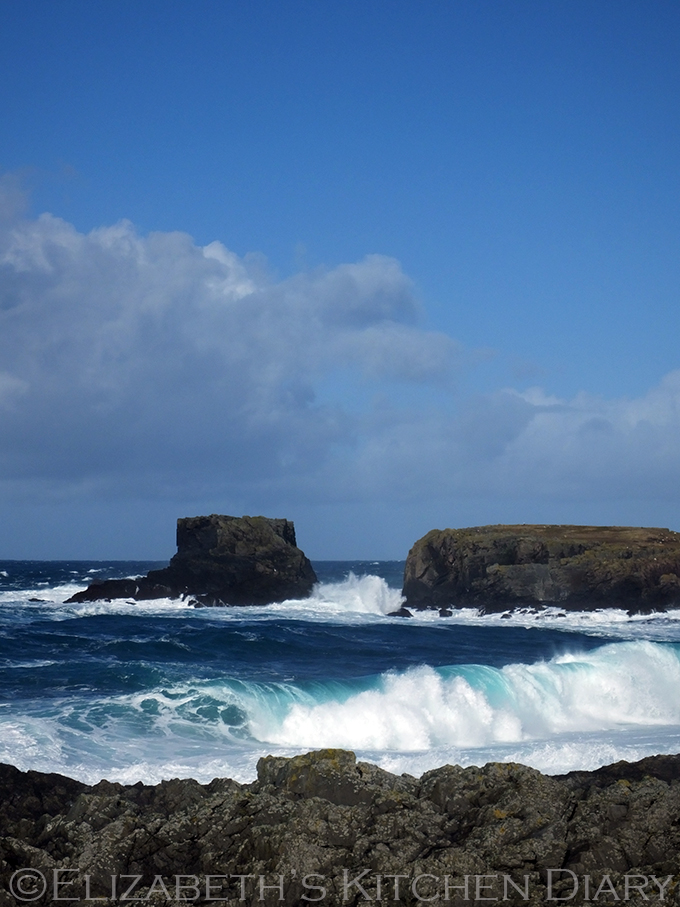 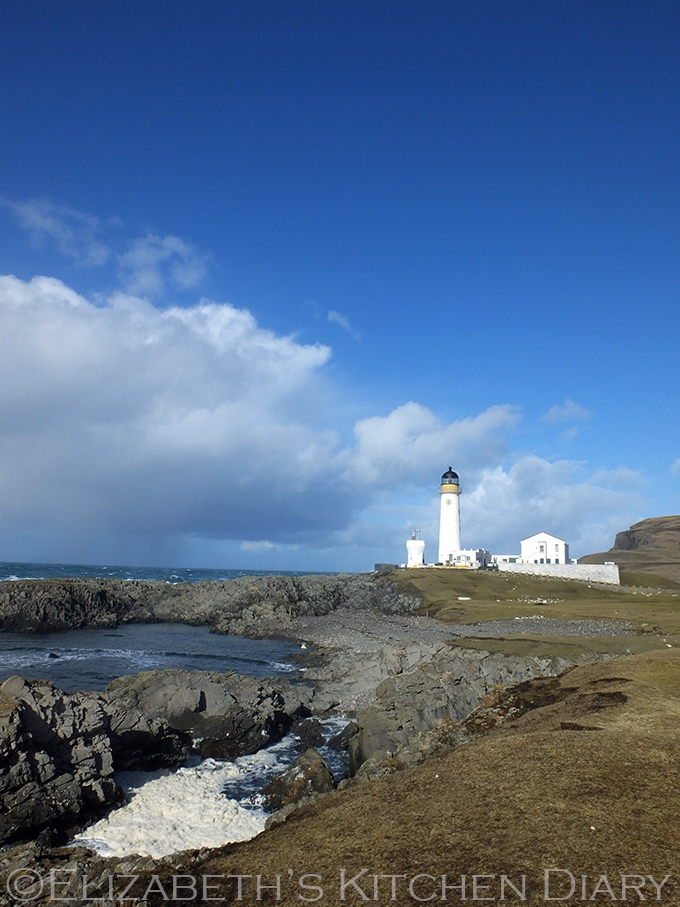 See that foam down in the bottom left hand corner of the photo above? The wind was blowing that foam into the air, like soap bubbles in a giant sea bath. You can also see another rain shower heading my way! 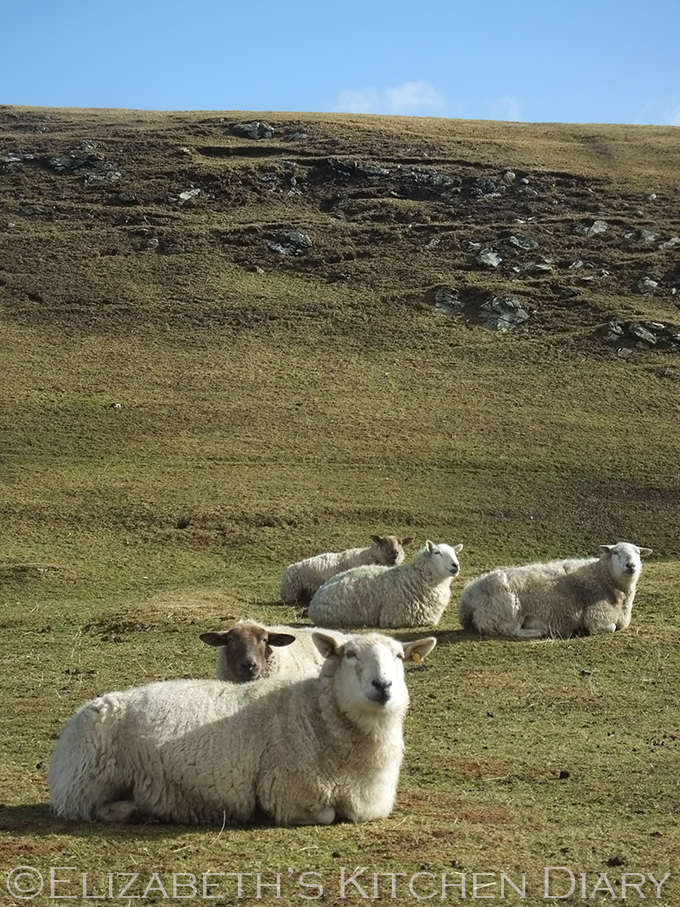 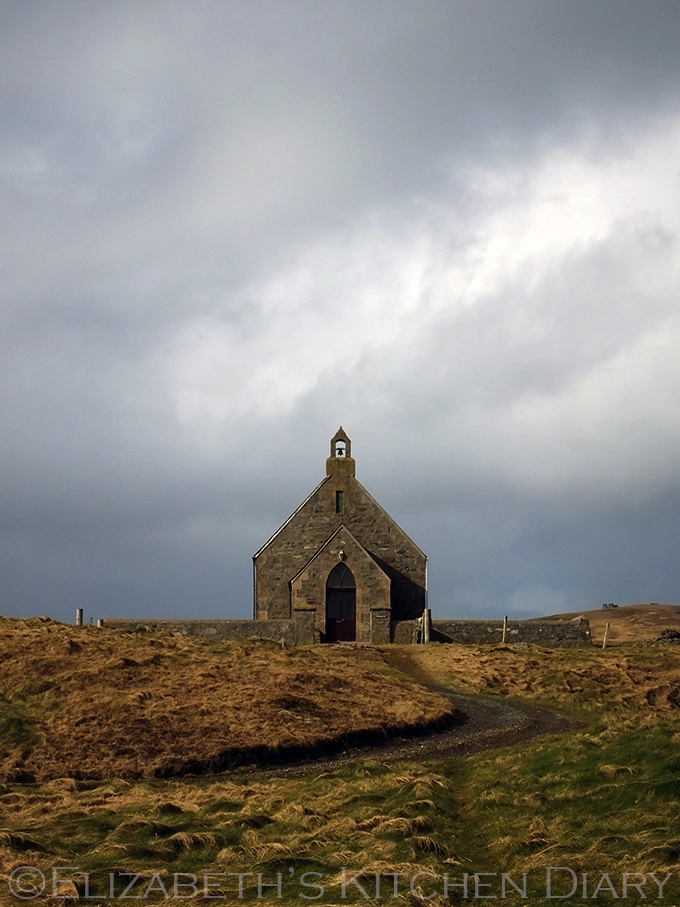 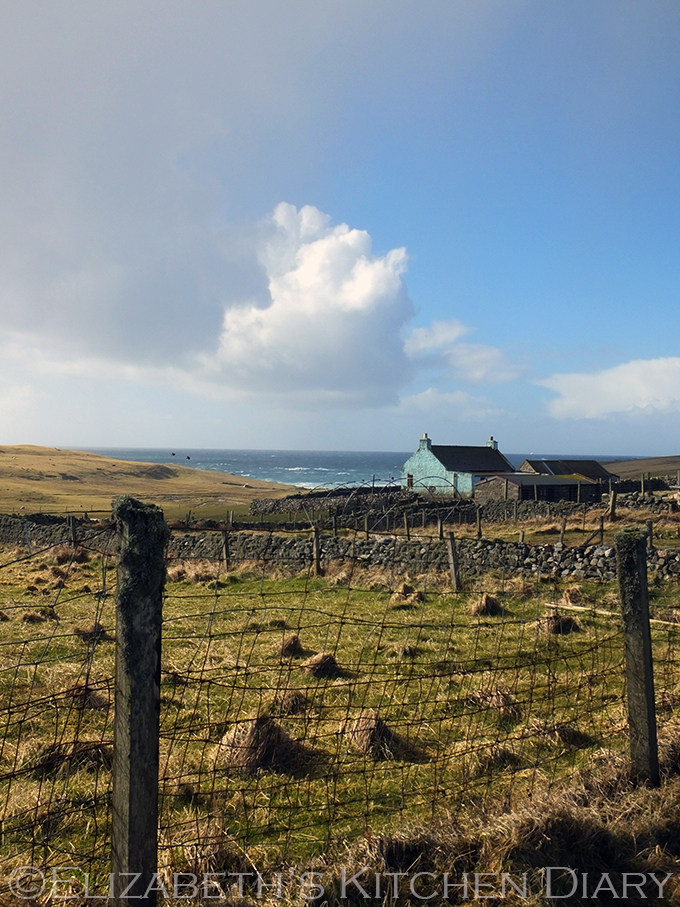 The reason for my visit to Fair Isle was to have a chat with the beautiful, inspirational and incredibly lovely contemporary Fair Isle knitwear designer Mati Ventrillon. That story (and a delicious recipe!), however, will be saved for a future Taste of Shetland post! 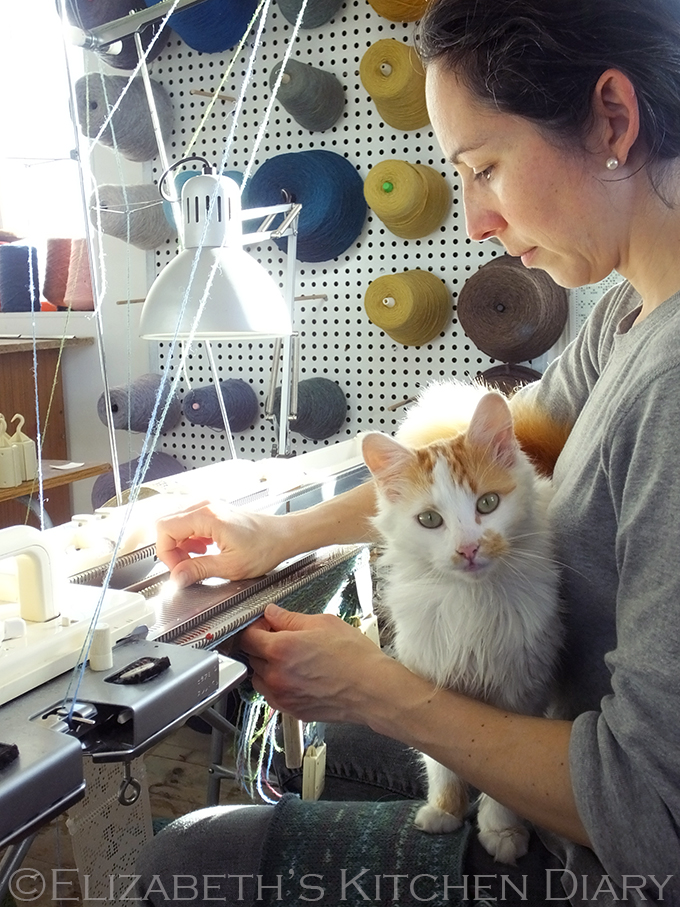 As I mentioned earlier, Mati wears several hats, so when it came time for my flight back to the mainland of Shetland, she put her khaki overalls back on and headed back to the airport strip for airport duty, with a quick stop off at the fire station to let them know the flight was on its way. 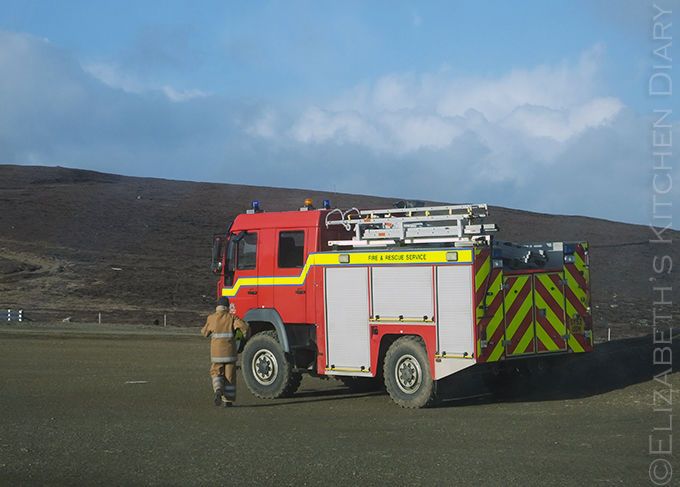 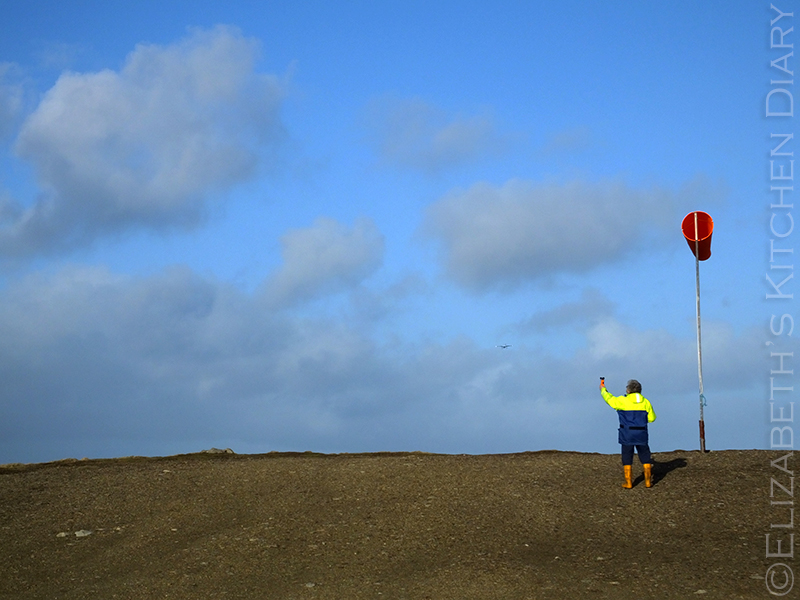 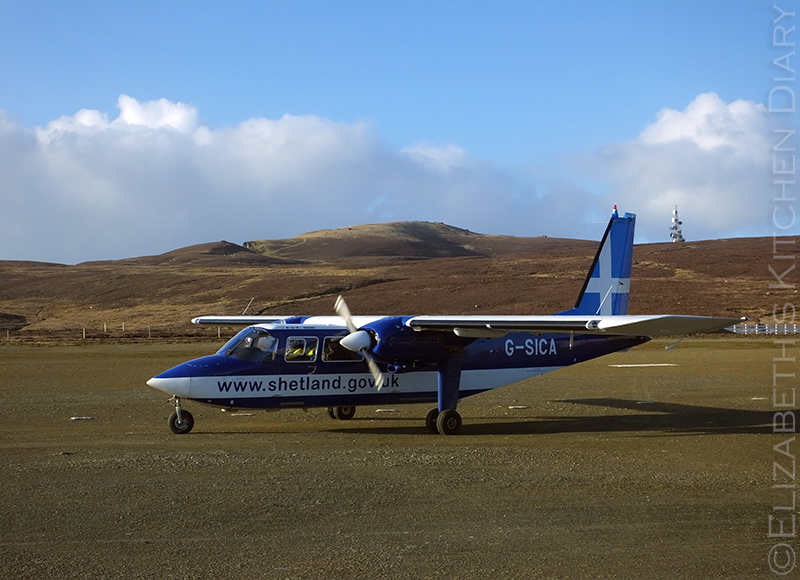 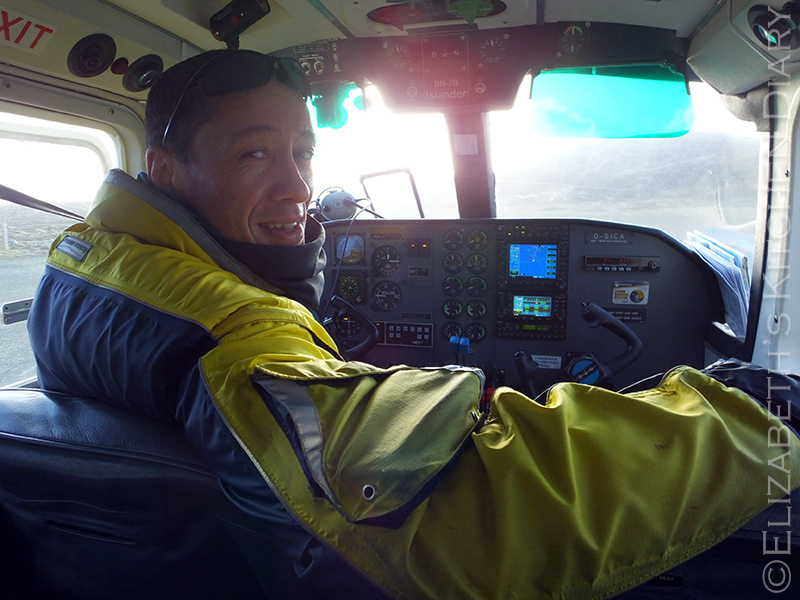 Imagine my delight when I discovered that I had the flight all to myself on the return trip. Above, the pilot delivers the safety briefing. There may or may not have been a bit of swooning here on my part, but I shan’t confess to that.

That flight home was something else. A whole new indescribable once-in-a-lifetime experience for me. I’ll be an old lady (if fortune smiles upon me) on my deathbed, and I’ll still be grinning. I love my life! I’ve come to realise that I’m not getting any younger, and there is so much left I want to do during what’s left of my remaining days. My bucket list is growing, and flying an airplane has been moved to the #1 slot.

Now, where to get lessons! 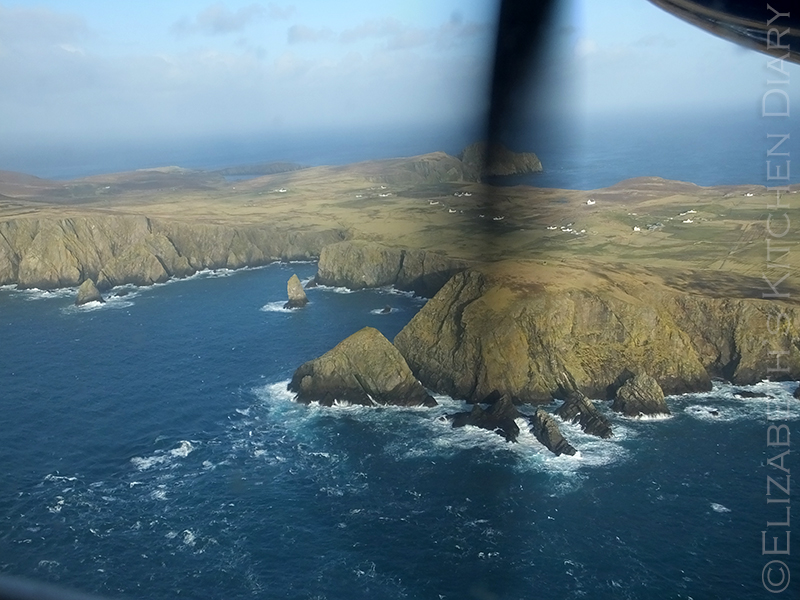 To find out more about Fair Isle visit www.fairisle.org.uk.