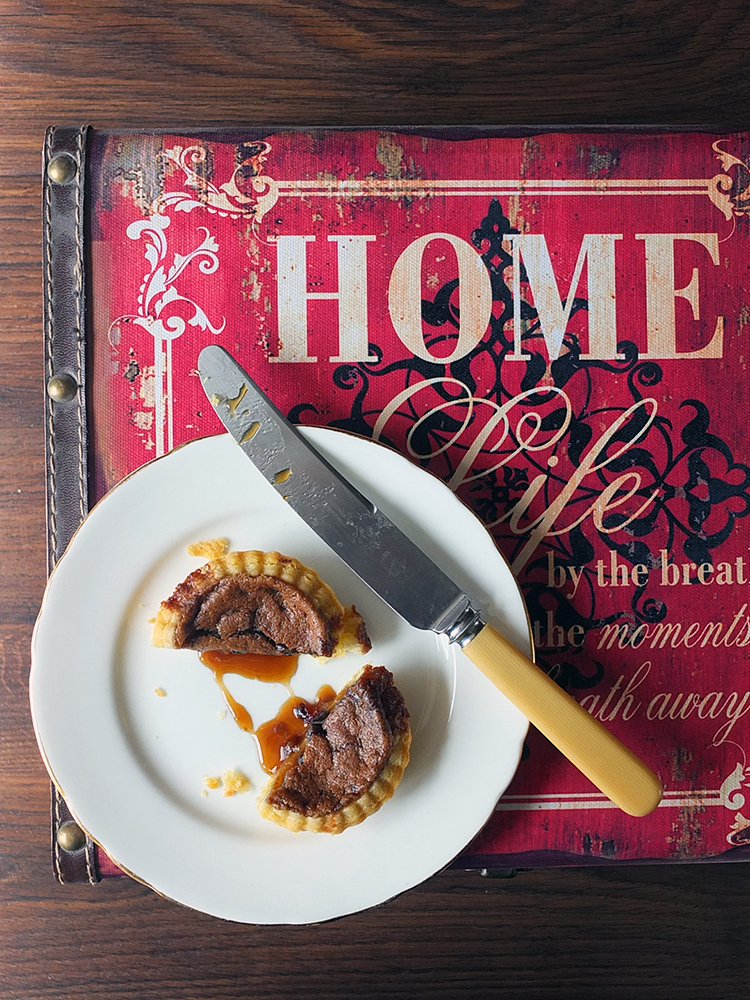 Today is Canada’s 150th birthday! To help celebrate, here’s a recipe from my handwritten notebook, a recipe I brought with me when I immigrated from Canada to Scotland in 1999. I have no idea where the original recipe came from, and, if I am to be honest, twenty years ago butter tarts weren’t exactly my favourite of all the Canadian sweet desserts. I genuinely don’t even know how it ended up in my notebook! I think it might have been at the insistence of a Canadian friend who suggested I take the recipe with me across the pond.

Fast forward twenty years and wow, I can’t believe these butter tarts haven’t been made regularly in my kitchen! The only reason I ended up making them recently was because, while flipping through said notebook for recipe inspiration, I noted that the filling included currants.

Currants are not an ingredient I usually buy unless I’m making a Christmas cake, but I had the remainder of a packet lurking in the back of my cupboard after buying them to make a Whalsay Hufsie recipe some months ago and so I thought I’d give the tarts a try again after all these years. 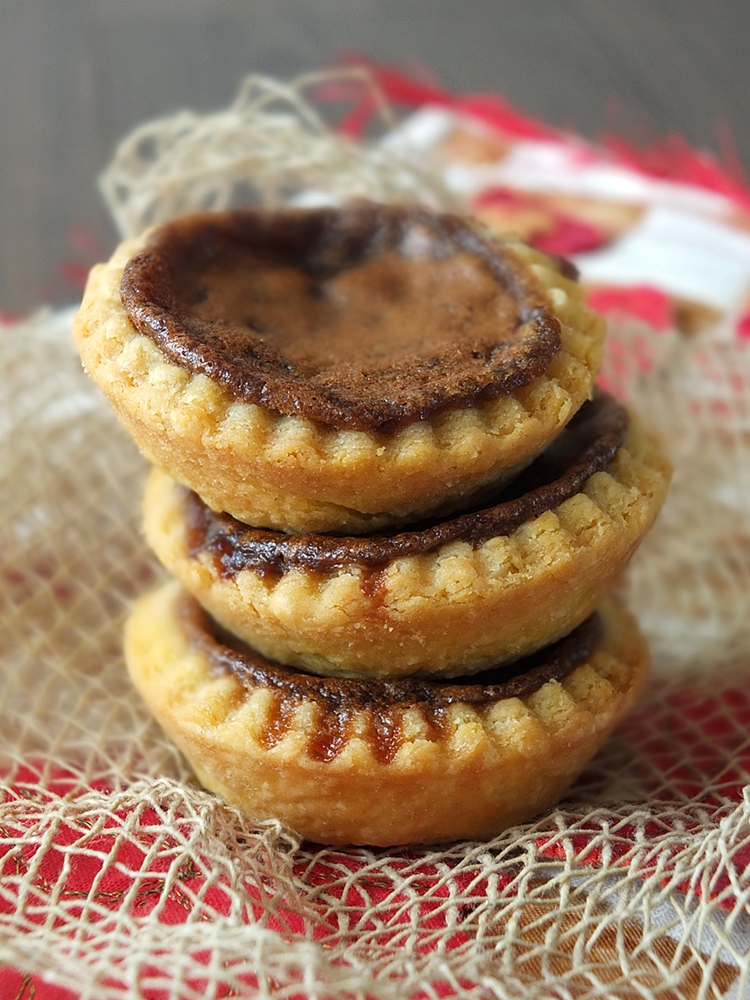 I am so very glad I have rediscovered this recipe! The butter tart filling is a delicious, sweet, caramel/treacle like filling, a bit like a pecan pie but without the nuts. When it first comes out of the oven the filling is very liquid and the tarts need to be served on a plate (perhaps with a scoop of ice cream), but as they cool the filling solidifies. On day two they’re much more portable and you can grab one or two and eat them on the go.

There are many variations out there of this recipe. Some include nuts, either pecans or walnuts. Some use raisins. Some add golden syrup or an extra egg to help thicken up the filling. I think this recipe is perfect as it is. 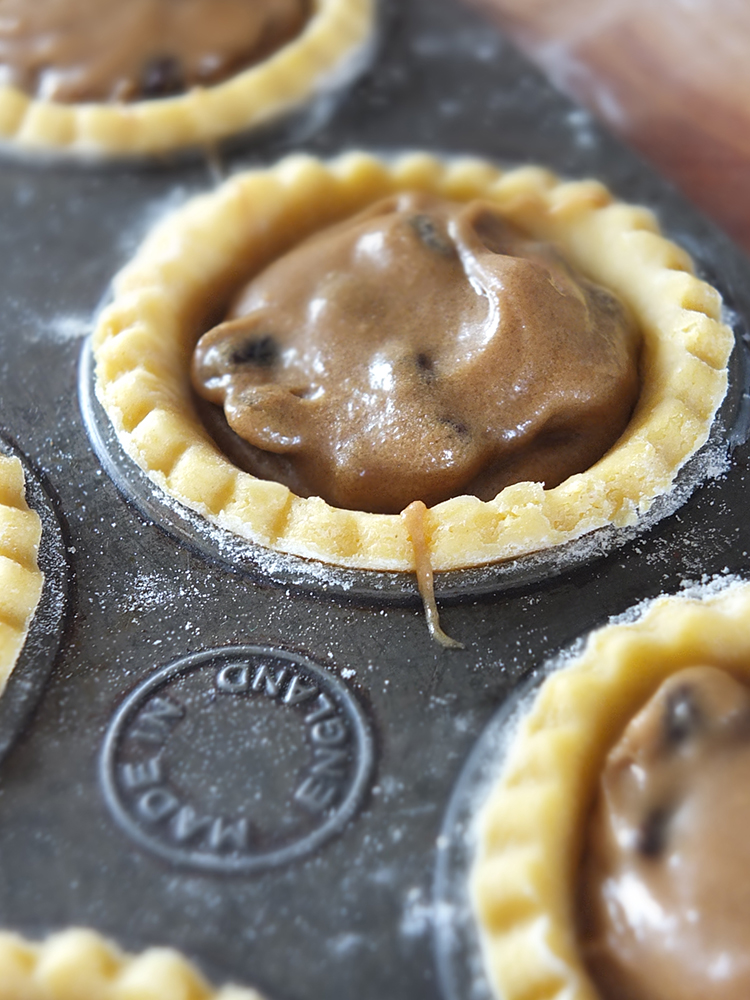 A good pastry is important too, and as my handwritten recipe only contained the ingredients list for the filling I turned to Nigella Lawson and her shortcrust pastry recipe. I’ve doubled her quantities to make enough dough for the amount of filling specified. Make sure you follow the steps closely, freezing the butter and flour at the start and using cold egg yolk to bind. It really makes for a delicious, flaky pastry. To save time you could always use some ready made shortcrust pastry.

Another tip is to use a tart tin, as pictured above. Now, tart tins, I remember from my Canadian childhood, were not something usually found in kitchens. I picked mine up (here in Scotland) in a charity shop for only 50 pence, and it really does make for perfectly formed tarts. I read somewhere that you’re supposed to grease tins like this with a different type of fat than used in the dough to make them turn out easier. I used vegetable fat, since the dough contains butter, and although the pan is non-stick they turned out perfectly. 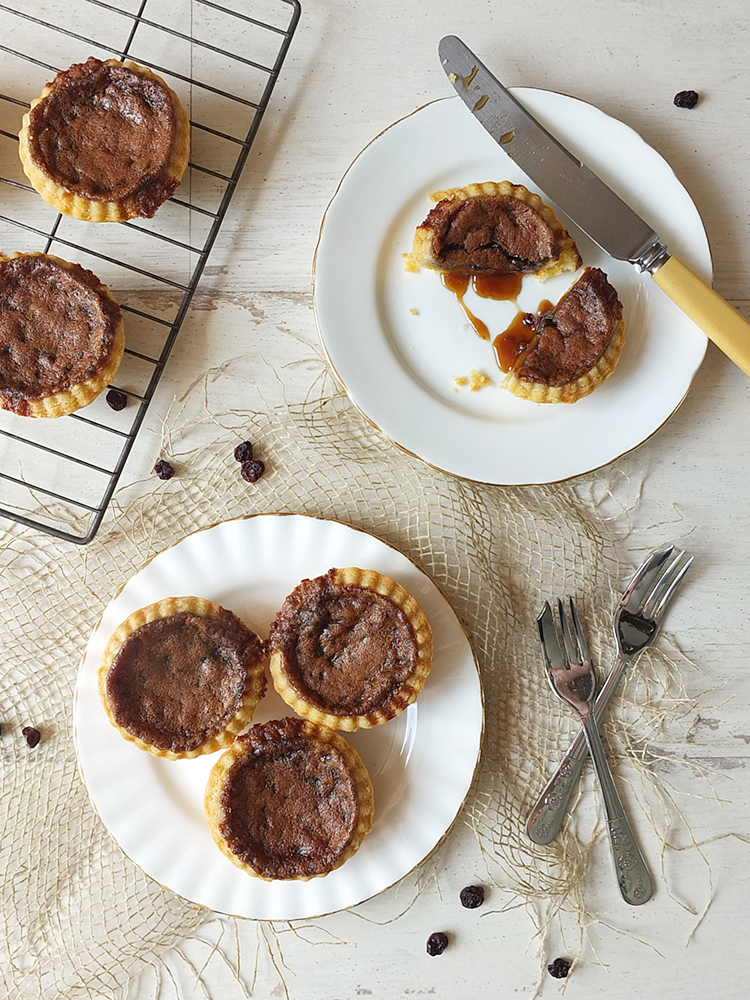 If you don’t have a tart tin just use a 12-hole muffin tin. Note, also, that the butter tart filling will rise and bubble up during baking, and it might overflow a bit. Just leave the tarts in the tin for five minutes to cool before removing. The filling will subside and if you remove the tarts before the bubbled up extra solidifies completely you’ll be fine. Soak the pan in hot soapy water for a few minutes to clean, no problem.

My family absolutely loved these tarts, but be warned, one is usually sufficient. They are rather sweet, but incredibly delicious.

Are you celebrating Canada Day where you are in the world? How so? Let me know in the comments! 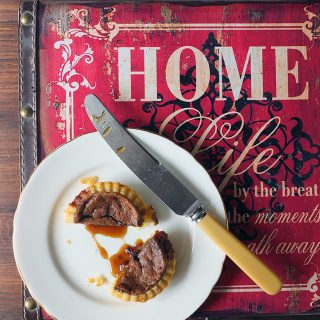 Butter tarts as about as Canadian as you can get, when it comes to desserts, just after apple crisp and wild berry pies.
No ratings yet
Print Rate
Prep Time: 15 minutes
Cook Time: 16 minutes
Total Time: 1 hour 1 minute
Servings: 18 tarts
Author: Elizabeth

for the shortcrust pastry

Category: All Manner of Sweet Things, Everything Else, RecipeTag: butter tart, Canada, pastry