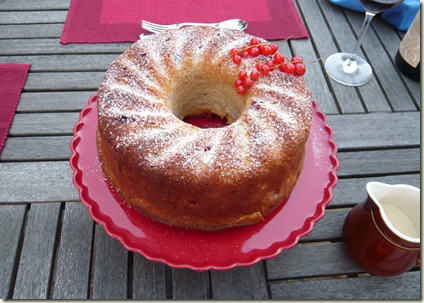 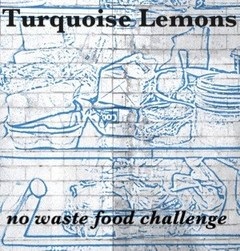 Thank you to everyone who has participated in the No Waste Food Challenge over the last two months. This blogging challenge, created by Kate from Turquoise Lemons, was launched to encourage us to share the recipes we’ve made using up leftovers and neglected ingredients that otherwise would have gone to waste. This is usually a monthly challenge but as Kate and I have been incredibly busy over the last few months I decided to combine August and September’s challenges.
As a result there was a massive 38 entries! As such, I’ve divided the round up into two categories
Part 1:Sweet Recipes
Part 2: Savoury Recipes
There have been so many new faces and blogs discovered over the last two months, it’s a pleasure to have you join in, thank you! 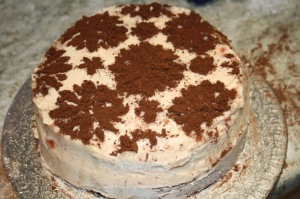 Caroline kicks things off by using up the remains of a jar of mixed berry jam in this layered and stencilled cake she made for an afternoon tea team building exercise at work and she used the opportunity to play with some stencils she’d received for last Christmas. 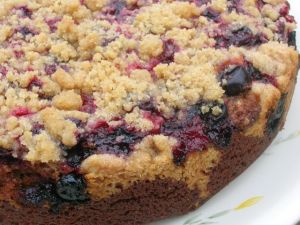 Choclette used up some sour milk in this “delicious mix of tart fruit, sweet crunchy topping and a soft, light, buttery, not too sweet, mild chocolate sponge – a fantastic combination of flavours and textures.” Her sour milk is real soured milk, made when raw milk goes off. 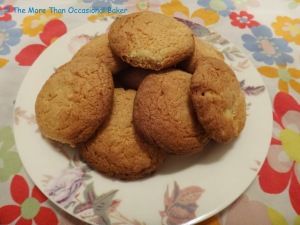 Lemon Frosting Cookies by Ros, The More Than Occasional Baker
Ros made a little too much lemon frosting for a batch of lemon cupcakes and she had a little leftover cream cheese from making nutella whoopie pies, so she got thinking and came up with the very clever idea of combining them with flour, egg and lemon zest and making cookies! A superb NWFC entry!
*** 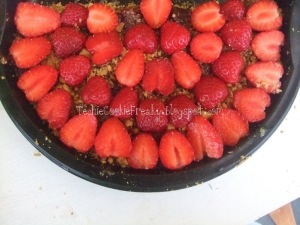 No Bake Leftover Strawberry Cake by Kavitha at Techie…Cookie…Freaky
Kavitha got creative with half a dozen digestive biscuits, some chocolate nearing its Best Before Date, half a jar of jam laying idle in the fridge and some fresh strawberries in this no bake cake which her husband loved. I love these creative recipes thrown together with a bit of this and that!
*** 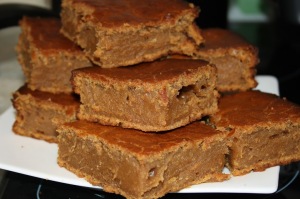 Sticky Ginger Cake by Caroline from Caroline Makes…
Caroline used up the remains of a tin of black treacle which had been lurking in her cupboard for far too long and the remains of a pot of yogurt in this scrummy looking ginger cake. These look perfect for these cold Autumn days!
*** 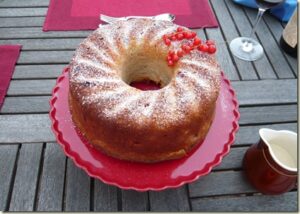 Redcurrant, Rose and Raspberry Bundt Cake by Jean from Baking in Franglais

Jean used up the remaining redcurrants from her harvest and a handful of tired raspberries in this delightful looking bundt cake, the last of which was made into a trifle! 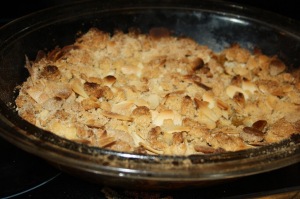 Ginger Peach Crisp by Caroline from Caroline Makes…
Caroline’s second NWFC entry uses up some over ripe peaches in this mouth-watering crisp/crumble. She combines the peaches with some fresh ginger. This flavour combination sounds fantastic!
*** 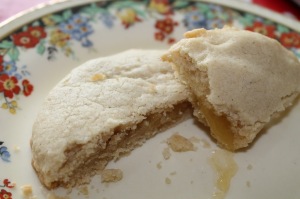 Almond and Lemon Cookies by Claire from Clairey Fairy’s Cooking
Claire used up the remains of a jar of lemon curd to fill the centres of these delectable little almond biscuits while her daughter had a morning nap. What a delicious way to use up lemon curd!
*** 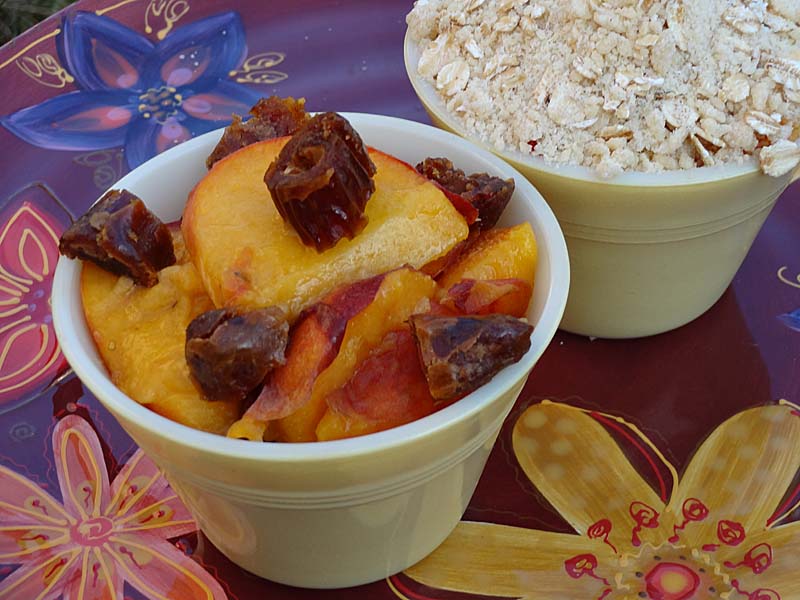 Peach Doughnut and Date Crumble by Shaheen from Allotment2Kitchen
Shaheen used up some fresh peach doughnuts which were starting to go soft (and no, these are a type of fruit and not a doughnut made out of peaches as I initially thought!) and some dates which had been lurking in her fridge for far too long to make this scrummy looking crumble.
*** 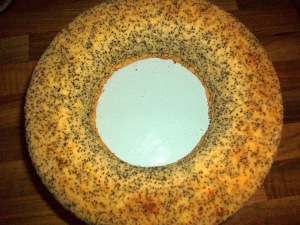 Poppy Seed and Lemon Cake by Jen from Blue Kitchen Bakes
Jen had no fewer than eight spare egg yolks after she made an Angel Food Cake so she used them all up in this lovely poppy seed and lemon cake. The recipe she found online gives the recipe for different quantities of egg yolks, so it’s worth bookmarking, she says.
*** 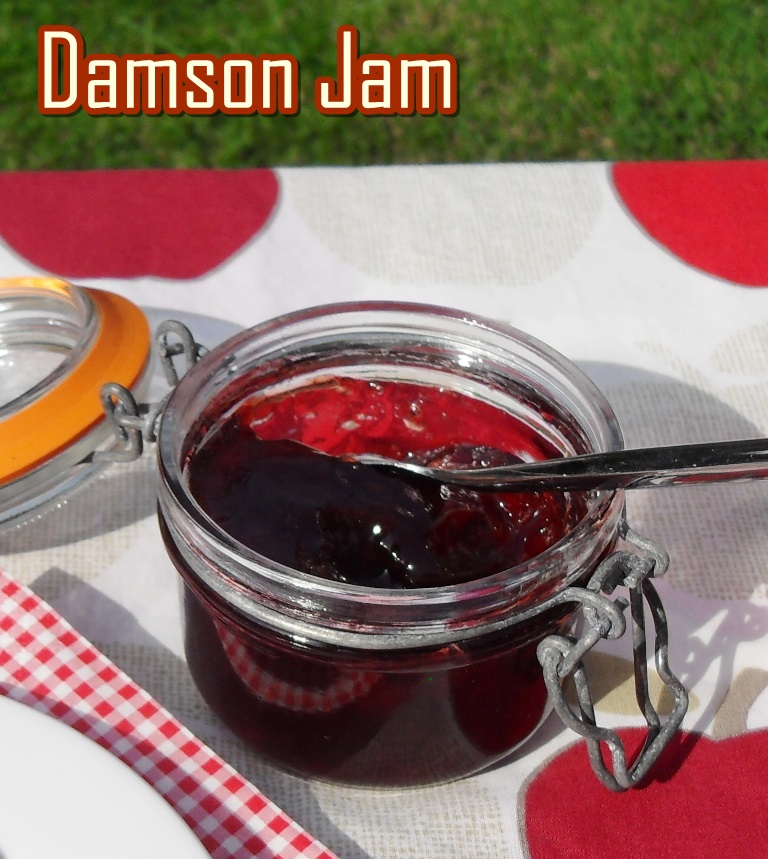 Damson Jam by Camilla at FabFood4All
Camilla has usually ignored the Damson tree in her parent’s garden, but this year she didn’t let the fruit go to waste – instead, she made a lovely damson jam with it. You’ll have to read her post to see how she cleverly dealt with the damson stones!
*** 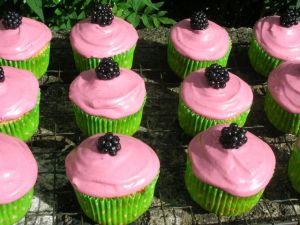 Blackberry and Apple Cupcakes by Choclette at Chocolate Log Blog
Choclette combined juicy ripe blackberries and windfall apples from her mother’s garden to make these delectable little cupcakes. She also included a bar of blackberry chocolate which had been lurking in her cupboard waiting for the perfect opportunity to be used.
*** 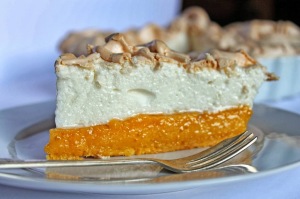 Carrot Meringue Pie with Carrot Pastry by Kate at Veggie Desserts
You’d never know it from the photograph, but this luscious looking pie contains the carrot pulp left over from making fresh carrot juice! The filling contains fresh carrot juice, so in addition to being a lovely tasting pie it can almost be considered healthy too!
*** 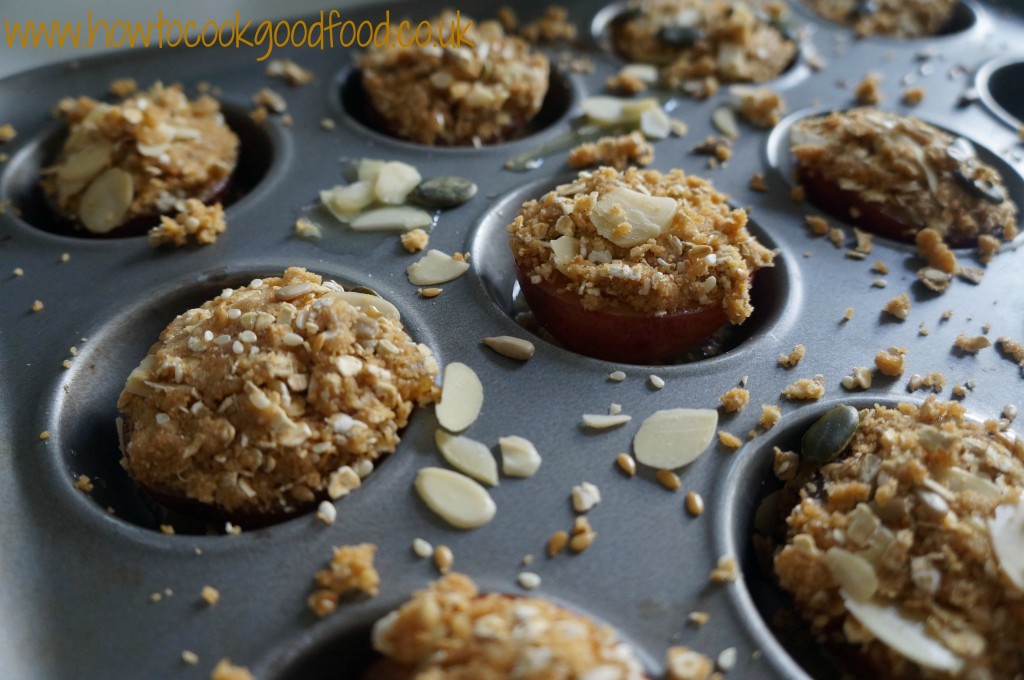 Baked plums with a Ginger and Almond Topping by Laura from How To Cook Good Food
Laura used some ginger nut crumbs out of her freezer and store cupboard items to top some of the abundance of plums she has to make this quick and healthy pudding.
*** 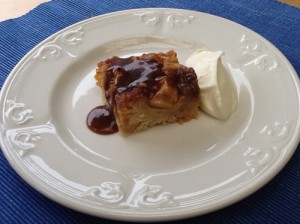 Sarah shares this recipe from her caravan in a field in France. She’s made a gorgeous “Gâche Melée (pronounced “Gosh Mellar” by the local Guerns), a centuries old Guernsey apple suet cake or dessert.”